Robyn, I am having a problem and am at my wits end. I have two tortie sisters, age 13 this year, and two male cats, age 8 this year. Dunkin (male) occasionally pees on the beds the females sleep in. Now he has started peeing on the toys in the toy baskets. Any idea why? Any idea on how to stop him other than taking away the toys? Thanks for any help you can give me on this matter! He has been to the vet. He had a bad urinary tract infection some years ago, and I am afraid that is when the behavior started. Usually it is just the beds the girls lay in, but he does occasionally pee elsewhere. He is on Amitriptyline for this issue. If he gets really bad, the vet gives him steroid pills. I hate to have him take them too often, I am afraid the steroids are not good for him.

Is Dunkin only peeing on the toys in the toy basket and not any that are laying around on the floor? Because if so, and if you can stand the idea, you might want to stop putting them in a basket, it’s possible that something about the basket is tempting him to use it as a litter box. Are any of the toys catnip toys? I don’t know why, but there’s something about catnip toys that entices Sugarbutt to occasionally (but not always and not often) pee on them.

You *may* want to give the Feli-Way spray a try. I don’t find that the Feli-Way plugins make much difference in my house, but the spray will very often keep them from coming back and peeing in the same spot.

If it’s behavioral and not medical, one trick I found to help break the habit – after you give the area a thorough cleaning and smell removal – is to put a food bowl in the spot. Cats won’t pee where they eat, so if he ha been thinking it’s OK to pee in that spot, that will help redirect him.

Edited to add: And Doodle Bean left a comment here with some great suggestions.

I’m posting this here so that y’all can share any suggestions that you have on the topic. Got a thought? Post it in the comments, please. Thank you! 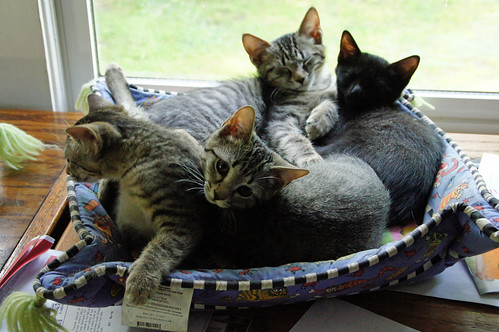 Noms, crammed into one bed. Though I guess they aren’t really CRAMMED – they fit nicely, don’t they? 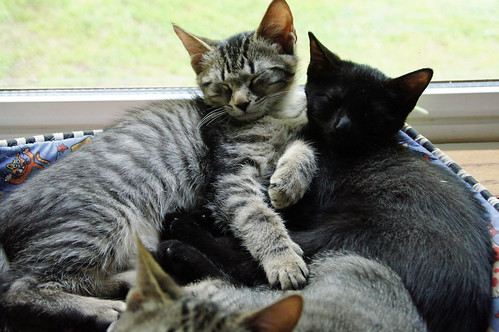 Newbery and Logie spend a lot of time snuggling. When they’re not fighting, that is. 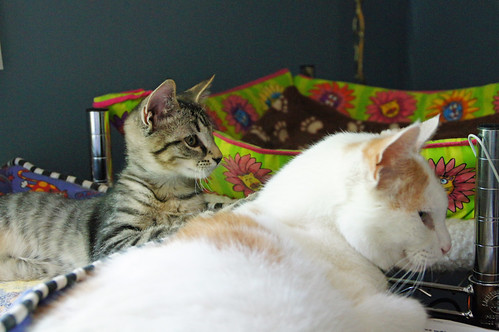 Spanky had no idea Newbery was back there. 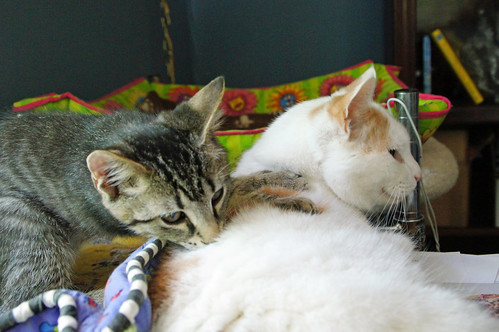 Even when this was going on, Spanky must have thought it was me, touching him. 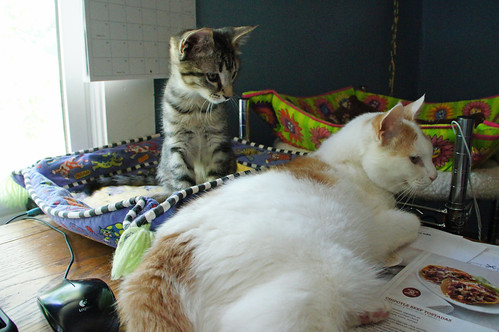 Then Newbery backed off. Suddenly Spanky’s sensors went into hyperdrive, he WHIPPED his head around, saw that Newbery was right there, deduced that all the touching he’d been feeling was NOT from his beloved Mama but from that little kitten, and he hissed and jumped off the desk onto the floor in one smooth motion. 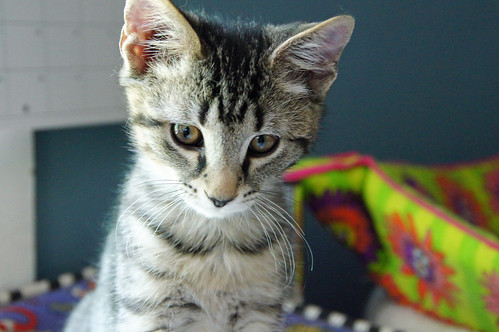 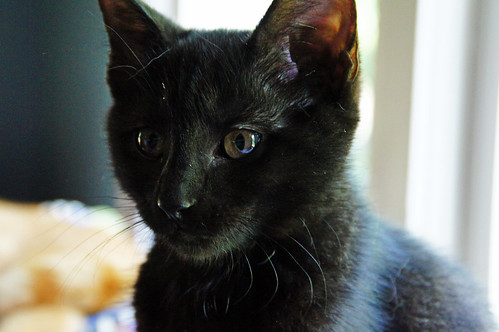 Logie’s been dusting again. She always forgets the step where she’s supposed to shake the dust off herself. 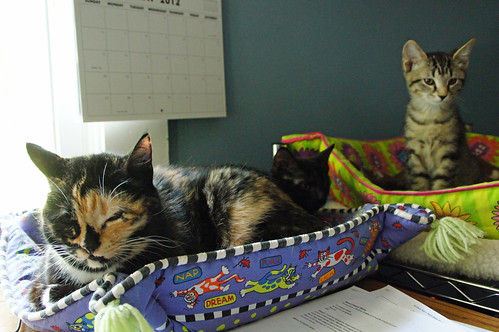 Something startled Logie, and she went to hide behind Miz Poo, incorrectly believing that Miz Poo would protect her (I think there was a vacuum going). Miz Poo is of the “If I don’t see a kitten, it isn’t there” religion, and so she refused to make eye contact with Logie. Eventually the vacuum went away, and Logie wandered off and no kittens were smacked. 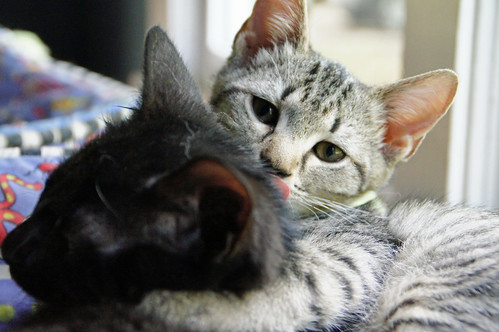 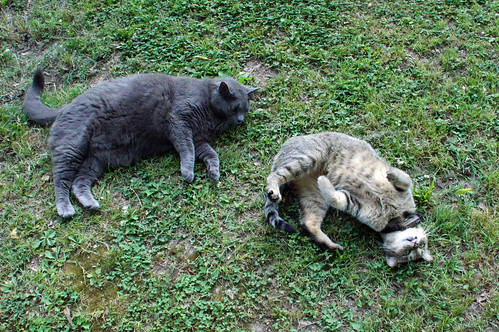 Kara and Elwood, rolling around in the grass. Kara didn’t have any idea that Elwood was there until… 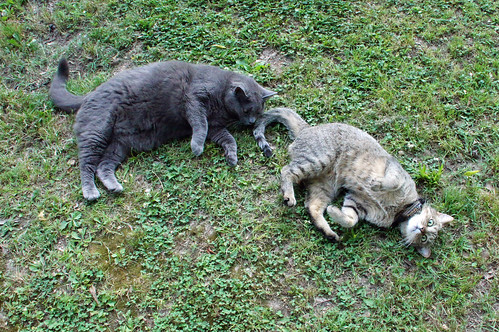 “SOMETHING TOUCHED MY TAIL. IS IT A MONSTER? IT’S A MONSTER, ISN’T IT? OH, I AM TOO SCARED TO LOOK! SAVE ME!”