Someone asked the other day, Someone else asked, and I was wondering too actually… what will happen to the lovely Maggie?

Once her babies are spayed and neutered and have gone off to Petsmart to be adopted immediately (fingers crossed!), Maggie will stay here with us. I’ll wait about a week to be sure her milk has dried up, and then I’ll have her spayed (id chipped, rabies shots, all that) and she’ll hang out here with us until room opens up at Petsmart for her, whereupon she will go to Petsmart (and hopefully be immediately adopted!).

I will tell y’all, I would really like to release the McMaos to explore the rest of the house, but I’m worried that Maggie’s protective instincts will kick in. Jake was so desperate to get into the guest bedroom Saturday that we let him in to see what would happen. What happened is that he bellied up to the kitten food and ate while growling at any kittens who came near, and then Maggie went ::FLOOF:: and started chasing him in a threatening manner around the room, so we ushered him out of the room. I’m tempted to let just Maggie out into the house to meet the other cats (without the kittens around for her to feel protective over) and see how that goes. 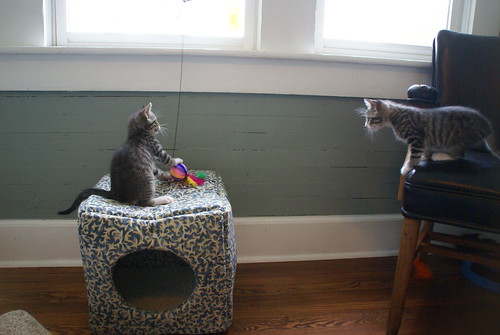 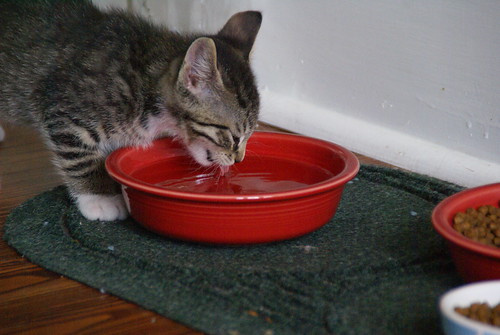 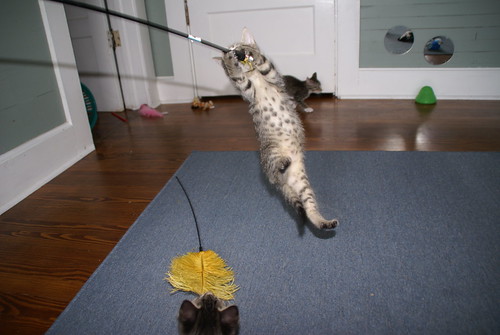 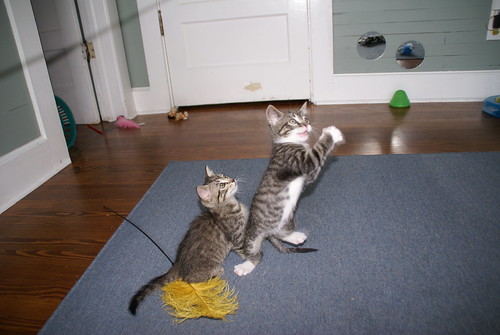 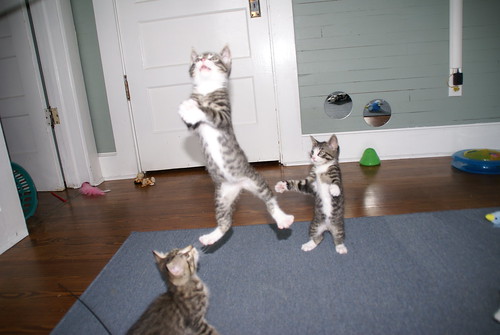 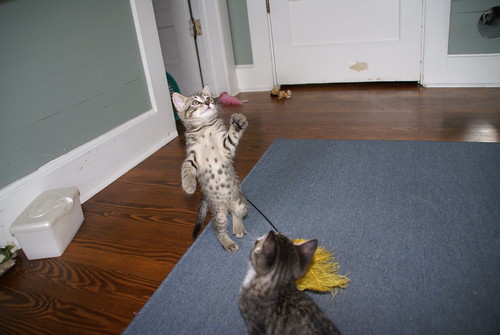 “So then I was all ‘You want yerself a real man, you know where to find me!’ She’ll call, right?”
“Sure she will, bro. Sure she will.” 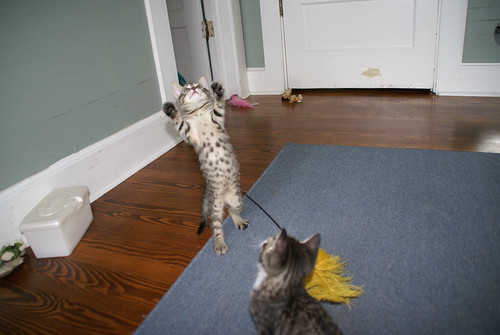 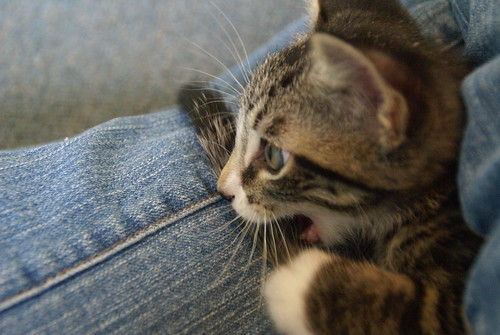 I don’t know what kitten tails taste like, but they must be really tasty given all the chewing that goes on. 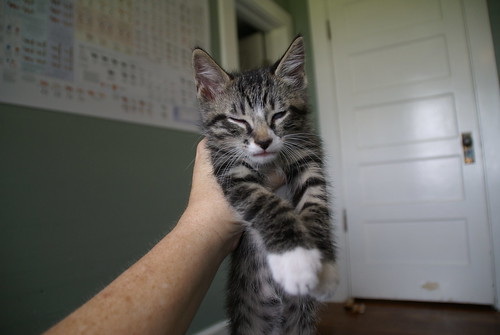 I have this cheap little rechargeable sweeper that I use in the foster room when the floor has gotten so bad I can’t stand it, and don’t want to put all the kittens into carriers and bring them out of the room. It’s fairly quiet, as that sort of thing goes, so I’m not too worried about scaring the heck out of the kittens the way a real plug-in vacuum would. However, the McMaos are not the bravest of kittens, and last time I used the sweeper in the room, they all ran to the closet and hid from me. 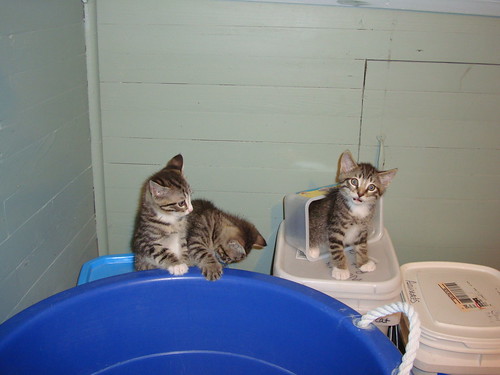 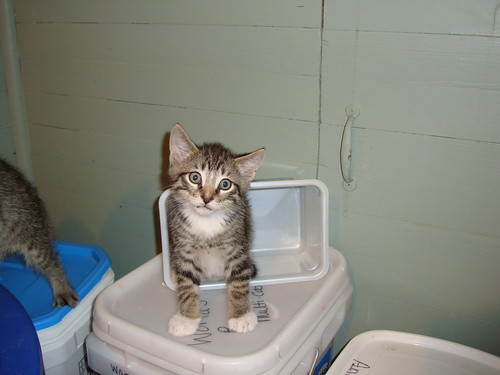 “I don’t like it. I tried to cram myself in this old baby wipe container, but I wouldn’t fit all the way.” 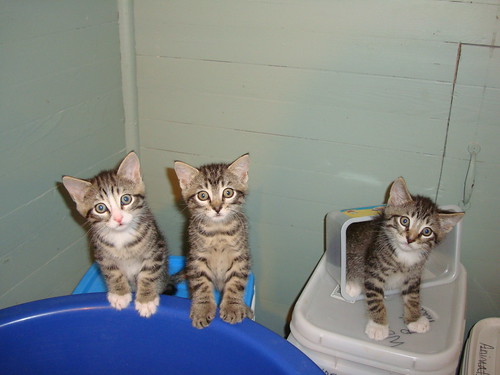 “We was ALL skeered, even Fergus Simon the hellion.” 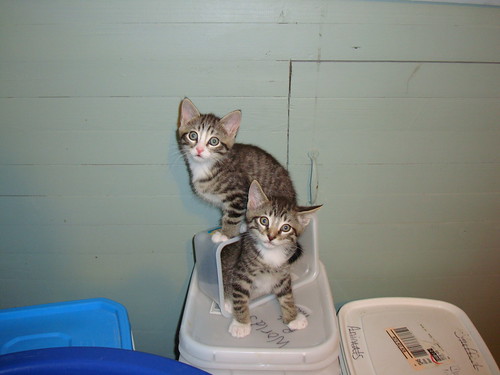 “Ferguson tried to get into the wipes container with me, but I told him ‘Bro, if I won’t fit, we’re not BOTH going to fit, and this is MY safe place!'”

Since there’s been such a lot of interest in Dorothy lately, I’ll break my usual don’t-want-to-jinx-anything stance on the topic and let y’all know that Dorothy has a forever home, and she’ll be going there this weekend. I won’t give you details ’til after the adoption is done (see above about not wanting to jinx anything), but I think she’s going to be very happy in her new home! 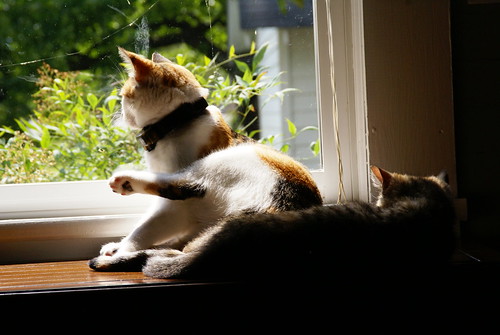 Dorothy and Alice, hanging out in the sun. 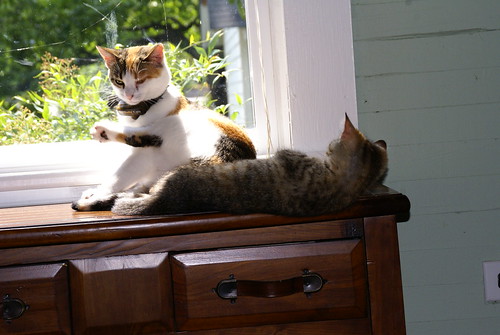 The Spice Girls are doing very well. They’re healthy and happy, and in the evenings when we’re watching TV, we can hear them running around like little wild things, playing. Jake really wanted into the foster room on Sunday, so I let him in. He walked to the middle of the room, looked at the girl kitties, and then walked out. They, in turn, were interested in Jake, but a little leery of him as well. They all floofed up a bit, but weren’t terribly freaked out. 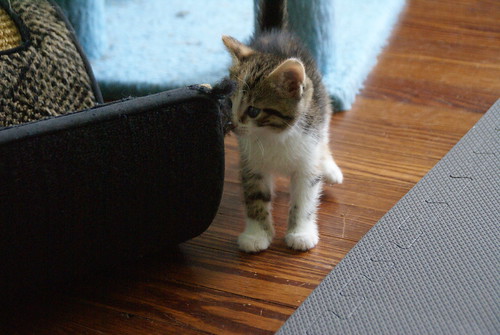 Cilantro, trying to decide in which direction to run. 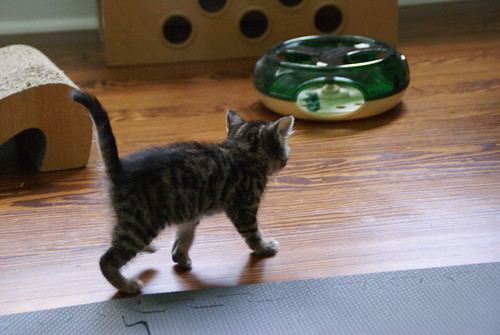 Clove. I love her markings. 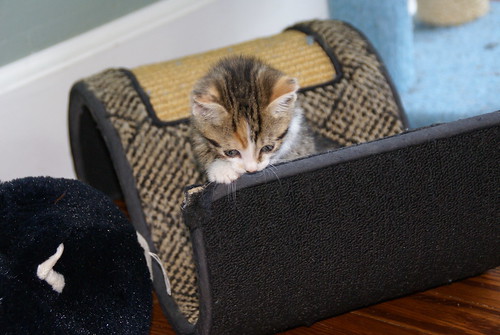 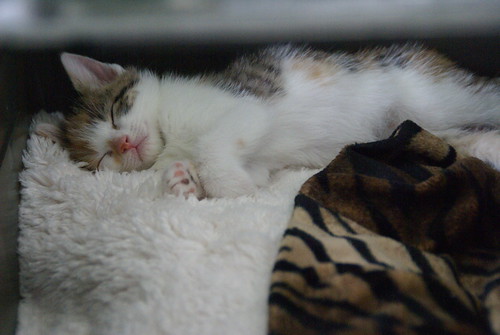 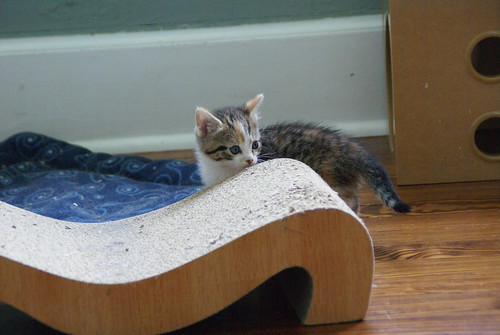 They sure do love that scratcher. 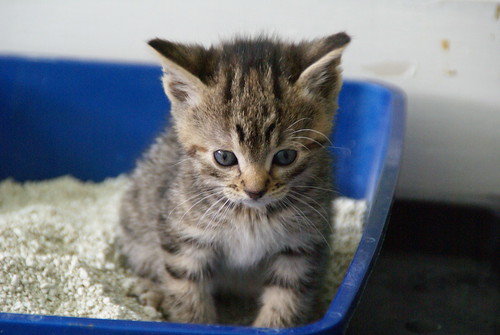 Clove demonstrates that these girls are well-trained in the litterbox arts. 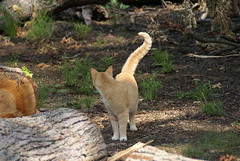 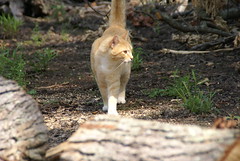 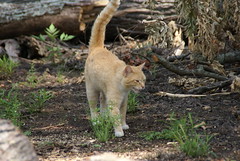 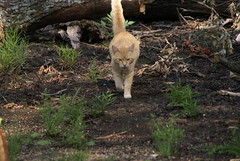 Coltrane, hanging out near the pig yard. One day last week, I was out checking on the pigs or feeding them, and I heard George bark, and looked up to see he and Gracie running full-tilt toward the far back corner of the back forty. My heart almost stopped when I saw that they were running toward Coltrane, and I thought I was about to see some carnage (I yelled at top volume for the dogs to stop, but they didn’t seem to hear me), but as it turned out (it’s hard to tell from a distance), Coltrane was outside the fence. George and Gracie stopped short of the fence, seemed to recognize Coltrane, and turned and ran back toward me.

(For the record, I really don’t think G&G would have killed Coltrane, but I also can’t swear that they wouldn’t – it’s possible they would have seen him as a threat to their flock.)