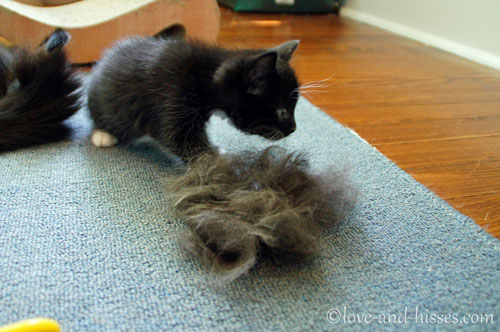 This is the amount of fur I got off of Kate in about 30 seconds with the Furminator. The kittens all came over and took turns sniffing it wildly, and then I mooshed it into a ball (so that it held together), and the kittens have been playing with it pretty much nonstop. The best kind of toy – free! Popular! And if the time should come when it gets barfed on, I can toss it on the compost heap! (Yes, cat fur is compostable.) 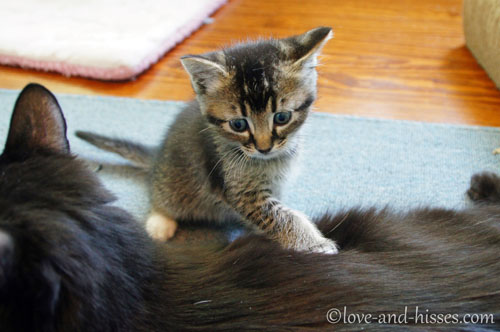 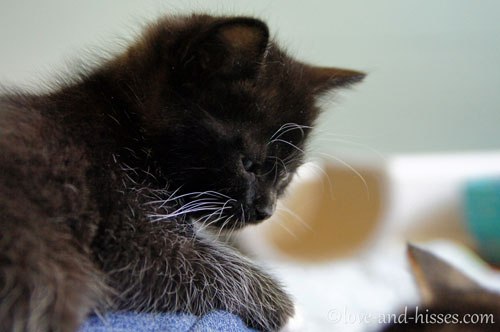 Buttercup, on my knee, thinking about taking a snooze. 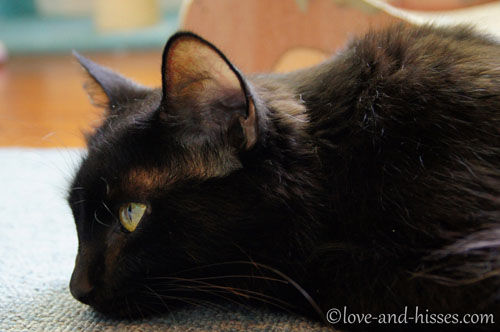 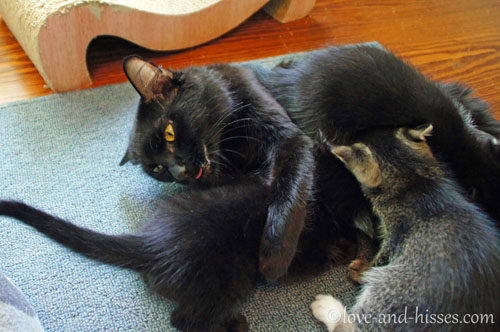 And then the kittens came along, and Kate began bathing them. 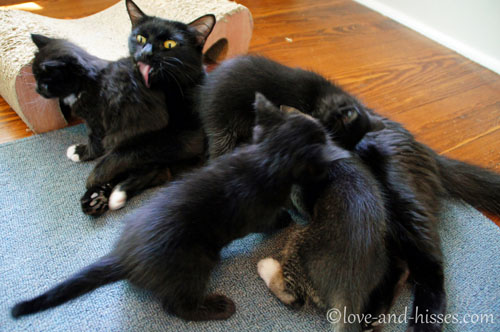 Not the best picture, but the look on Kate’s face is cracking me UP. 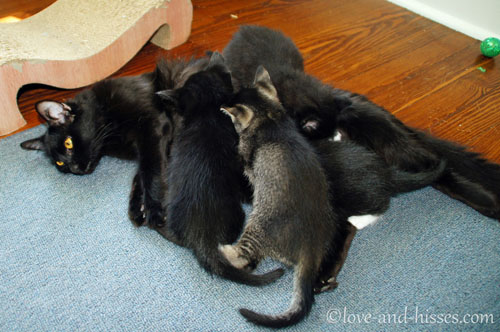 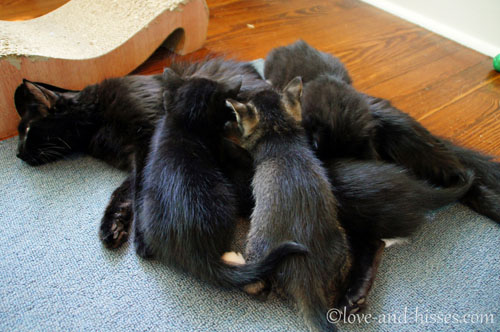 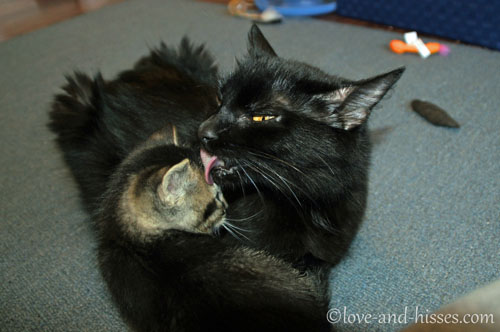 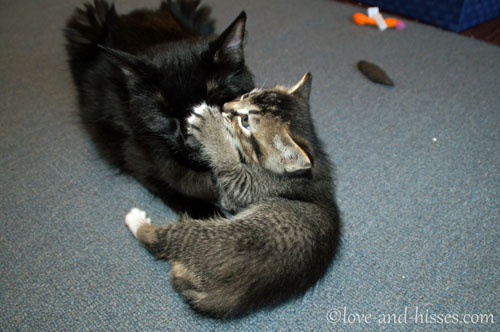 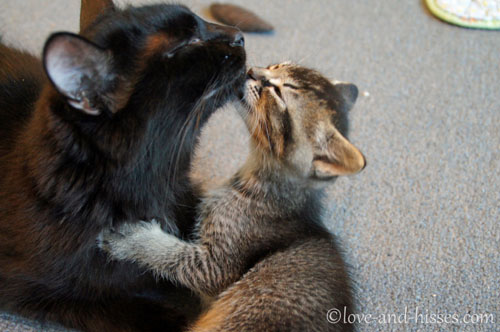 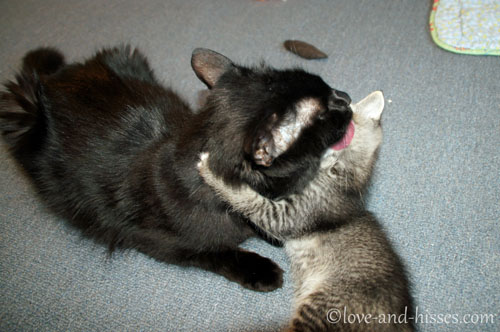 Charming and Jareth are still eating canned kitten food in the morning and evening (though sometimes I have to point Charming toward the food a couple of times before it clicks in his brain. Bless him, he is not the smartest kitten ever born.), and yesterday Buttercup joined in as well. I couldn’t get Leia interested at all, and she wandered around the room howling sadly. Finally, after everyone else was done eating, she went over to their plate and sniffed around, and then started eating the crumbs they’d left behind. Later, I spotted her eating Babycat from the bowl, so I wonder if she’s been doing that for a while and I just didn’t see it before now.

Aslan is the last holdout. I have smeared chicken baby food on his mouth, have put some canned food in his mouth, and cannot convince him to come over and eat on his own (or from my hand or a spoon). I know it’ll happen eventually, but for the time being he seems content to stick with the milk bar as his (as far as I know) sole food source. Stubborn little brat! 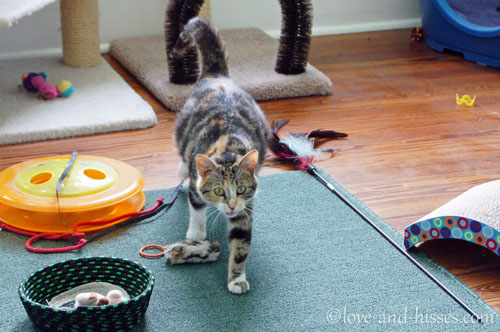 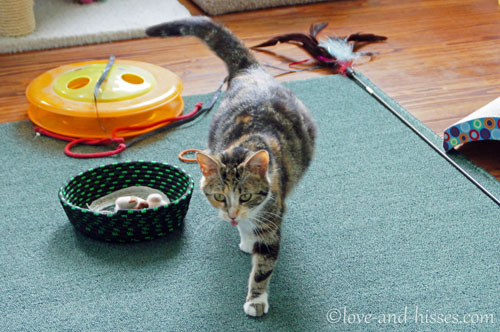 I cannot say that I ever noticed anything like this with Maggie or Kate or Emmy or Kara, but Khaleesi is obviously bigger on her left side than her right.

The alien belly movements continue. Khaleesi’s spending all her time just chilling and relaxing. I don’t even know what to tell you except that I check on her very regularly, and when something happens I will surely let y’all know as soon as possible. I had a dentist appointment yesterday and was away from the house for about an hour and a half. I just KNEW I’d come back to brand new baby dragons, but alas. All I found was Khaleesi looking at me, yawning, and saying “Is it dinner time yet?” 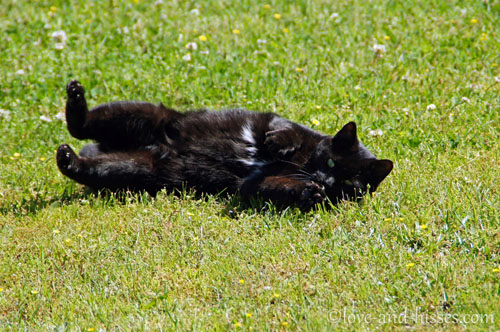 Maxi is pretty sure… 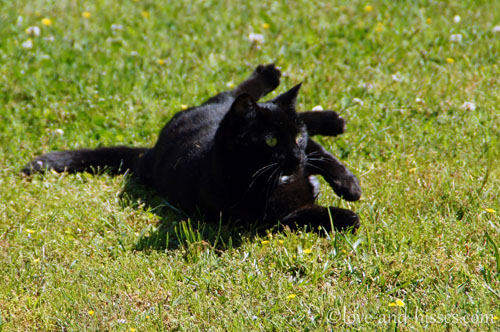 That Spring has sprung. FINALLY.