I have a question and hope the wealth of cat knowledge of your readers will help me solve it. My 11 year old male cat Jethro recently passed away. He was definitely the alpha of my family, particularly over me. He had me trained well. (I miss him desperately but that’s an aside). My other kitty was the older one. She’s 12 and is a tiny calico (and like many calico….she’s ….. Special). She is really bonded to me but has not much use for other people. She also drags my clothes all over the house to knead when I’m not home. SUUPER annoying. Only mine. Not boyfriends, or guests. Just mine. She and Jethro weren’t terribly bonded. They spent most of their time fighting over who got to sleep closest to me. But for 11 years it’s been just the three of us. As I work a lot, they kept each other company.

My heart breaks thinking of poor Janey by herself so much. Even though I know full well she sleeps under the bed all day. But I also don’t necessarily want to bring a new cat in since she’s not really a cat lover and she’s so so so beta. She’s jumpy, and quirky, and deferential.

Should I just let it be and have a one cat family for her remaining years? How do I know if she’s lonely. I really wish they could talk. It would save me so much heart ache and worry.

There was plenty of advice on this – you can read them here (and thank you, everyone who gave advice on this topic!) – but for my five cents’ worth, I’d say that there are some cats who just aren’t interested in other cats. Miz Poo, for one, will put up with other cats (as long as they don’t get too much in her space), but she would love to be an only cat, and wouldn’t mind it if all the other cats just disappeared. I don’t think I’d rush into anything, maybe give Janey a little time to adjust to the changes before deciding.

If she’s been used to the company of another cat it would certainly be worth trying to add a new cat to the household. Perhaps on a trial basis, to see whether their personalities are compatible?

I have a very shy, underconfident male cat who I thought could use some younger company, so I took in a female rescue kitten as “foster-to-adopt”, in case it didn’t work out – and now they’re like this: 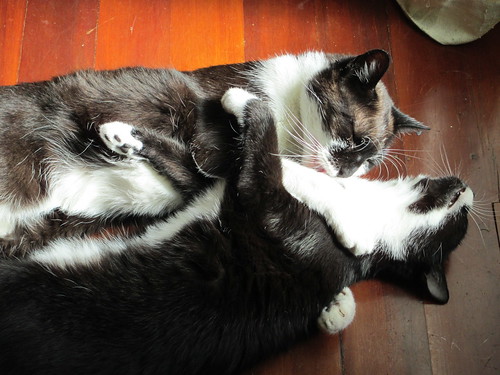 By the way, did you notice that your feather teaser doesn’t have any feathers to tease with?

That feather teaser had TONS of feathers with which to tease, but the Players chewed them off, one by one, leaving only little feather nubs behind. It doesn’t stop them from playing with it like crazy, so I’m wondering just how important the feathers are!

I never really noticed before, but what’s that little orange bump on Alice’s nose? It’s just a spot of color – it doesn’t usually show up quite so dark, but I was gettin’ fancy with the camera settings.

Angelo’s stripe makes him look like he has one regular tail plus another one (going in the opposite direction) packed flat, for emergency use! It certainly does! Angelo likes to always be prepared.

I love Stefan. Just flat out love him. I’m curious to know though – in all the pictures of him he’s by himself. Does he ever snuggle with anyone? Humans even? Will he let you hold him or does he much prefer to drape himself over the furniture?

He’s more the type to keep you company – and occasionally lay up against you – than to lay in your lap or ask to snuggle. He’ll let you do just about anything you want to him, he’s so laid back. Fred very often picks him up and flips him over onto his back like a baby, and he just lays there and purrs and purrs. When I’m outside working in the yard, he likes to follow me around and snoopervise, and comes right over to me to be petted and kissed if I speak to him.

GD is right, there’s been some snuggling-with-kittens, but that’s usually at the kittens’ instigation. I guess I should say that he allows the snuggling – even seems to like it – but doesn’t generally go looking for it. (Also, he has shown NO interest in going upstairs to hang out with the kittens.)

I just love those old baby pictures when I look at the previous years. Wee Buttercup, baby Corbett, Kate cleaning her brood, so sweet.

Oh, those baby pictures are driving me NUTS. I am dying to have some itty bitties (no offense to Mariette, Dennis and Angelo, of course), so to have adoptions being so slow is making me crazy. I NEEEEEEED BABIES!

I love that picture of Beulah with her head cocked. I think it is one of my favorites!! Oh I know, I love it too. She was such a little character!

This has nothing to do with these pictures but looking at how Angelo lays his tail around, I have a theory that Angelo secretly has a stub tail like some of his siblings.
However, a friendly sentient alien explorer attached himself to Angelo in a symbiant relationship. Now to investigate and discover Earth life, it must lay across things to understand them. (Kittens: warm, furry, purr-y)

Angelo always looks so cute sucking on his toes like a little goofball. I wonder at what age do most cats usually grow out of that behavior?

I would say that the majority of kittens tend to start growing out of self-soothing behavior around 4 months of age, though some of them never do – Sungold and Mr. Stripey still do it, and they’re well over a year old; it may end up being lifelong behavior for them.

I actually think Angelo’s beginning to grow out of it – he still does it, but never for longer than a minute, and not as often as he did when I first got him. He certainly is sweet (and happy!) when he’s doing it, and I always want to snatch him up and squeeze him when he does it! Angelo, up close and personal. I appear to have interrupted an important meeting or something. I know I mentioned up there that Stefan has been completely uninterested in going upstairs and hanging out with the kittens. But yesterday Miz Poo was sitting at the bottom of the stairs looking like she wanted to go up there (she likes to hang out in Fred’s room during the day), so I opened the screen door and let her through. About three minutes later, I heard someone digging at the screen door, so I went to look, and she was sitting there with Angelo and Mariette all up in her space, sniffing her, and Dennis a few steps away.

She wasn’t crazy about having them so close, but they were ALL KINDS of interested in being BFFs with her. I think it’s safe to say that the Players get along well with other cats! Alice was minding her own business, sound asleep, and Corbie decided to get all sniffy. Alice slept right through it, but Sugarbutt woke up and was all “What’s YOUR problem?!”