First things first: some of you saw on Facebook and in the comments to Friday’s post that I was in the hospital over the weekend. It was unexpected – I woke up in A-fib at 5:30 Friday morning, and was in the ER 20 minutes later. They don’t know what caused it, even after doing repeated tests on gallons of blood, and Friday afternoon they did a Cardioversion. I had to spend the night, since they did the procedure so late in the day. Saturday I did a stress test that came back completely normal, and they finally released me late Saturday. (That’s the very very short version; we didn’t go straight from “my heart feels funny” to “let’s knock you out and shock you!”) I’m under the care of a very good Cardiologist, and I promise I’m following instructions.

If you’re interested, Fred made a video of my heart monitor before the Cardioversion and again after.

(In that second video, they were talking about another patient; my potassium levels were fine.)

Fred reminded me yesterday of this (I was very out of it and didn’t remember it at all) : he was there when I awoke after the Cardioversion, and the first thing I said?

“I dreamed about cats.”

When I got home from the hospital Saturday evening, I got some great news! They weren’t adopted together (though that would have been neat, right?), but they both went to great homes. I hope Khaleesi’s adoption sticks this time – it sounds like she’s going to be one spoiled girl.

A year ago, as I’m sure most of you remember, we had tiny baby kittens. One of them looked like this: 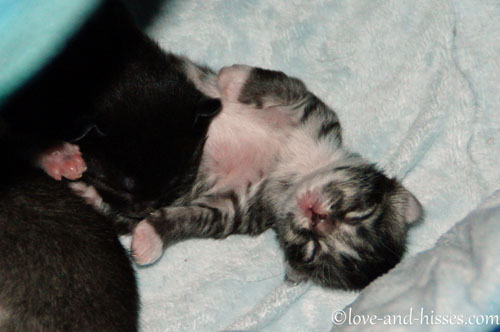 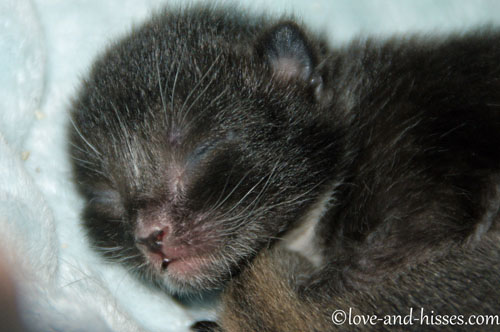 Well, the 19th (last Wednesday) marked their first birthday, and I got some updated pictures of Leia and Buttercup, who were adopted together last year! Buttercup, all grown up and GORGEOUS. Leia, all grown up and GORGEOUS (and floofy! That tail is pretty amazing, isn’t it?) Thanks for the pictures, Mickey! Updates on former fosters are the BEST! Angelo, checking out the cat tree in the hallway upstairs. The blue wall you see is the wall in Fred’s bedroom (I was actually sitting on his bed, trying to get Angelo to come snuggle with me. See the switchplate? I love that so much! I’m supposed to move it downstairs to my room, but keep forgetting.) Angelo, having some bunny-kicking time with the rainbow catnip toy. I love how Angelo’s sitting with his tail draped over Mariette. He’s like “Here, you don’t have a tail. Have some of mine!” (That’s Ferdinand’s tail nub and Orlando’s tail, in the bottom of the picture.) I had originally planned to put up a post on Saturday with pictures that I took of cats at the shelter, but got sidetracked with being in the hospital and all. I think what I’ll do instead is share them throughout this week.

I unfortunately don’t know the names of most of these cats; I’ll tell you what their names are when I know ’em! Another of the sweet kittens running around the shelter. I also got a picture of her carrying around a toy ball, but it was kind of blurry; I thought this was a better picture. Weird-looking cat, right? This is one of the shelter dogs, Jodi. (Edited to add: I call them “shelter dogs”, but they actually belong to the manager, Susan. They’re not up for adoption – well, actually, offer Susan enough money on a day when they’re being particularly naughty and she might let you have ’em! 😉 ) The other shelter dog, Jake. He looks very Chewbacca-y, doesn’t he? Both dogs are sweet and friendly (and mostly interested in food!) This is Granger. OH, he is just a little troublemaker and silly, sweet, and super friendly. I was thanking my lucky stars that Fred wasn’t with me, ’cause little Mr. Trouble here is Fred’s kind of kitten! This is when I went into the cat room. I’m not sure who this is, but s/he would like some pettin’. Don’t know who this is, either, but I love the way it looks like he’s balancing on his front paws! I do know that these are Mr. Stripey (center) and Sungold (on the right). I’m fairly sure this is Christina. She’s such a pretty girl! I’m not sure who this sweetie-pie is, but s/he was enjoying the spring weather! Look who kept following me around, demanding that I give her some love. I knew right away that this was Pepsi, because she’s the subject of one of my favorite pictures, this one: This is Rascal – I think that white mark on his forehead looks like a hastily scrawled heart! Also, he looks like he’s wearing an orange breathing mask over his nose and chin, doesn’t he?

Okay, that’s it for the Challenger’s House shelter cats for today – more tomorrow! Miz Poo was so happy to see me home again that I couldn’t have peeled her off me if I’d wanted to. (Luckily, I didn’t want to!)