I got word yesterday that Lilybet (aka Fake Mama) was adopted! She spent less than a week at Petsmart, which is pretty good. She went to a home with an 10 year-old cat and people to love and adore her – I suspect she will be a very happy and well-loved girl. 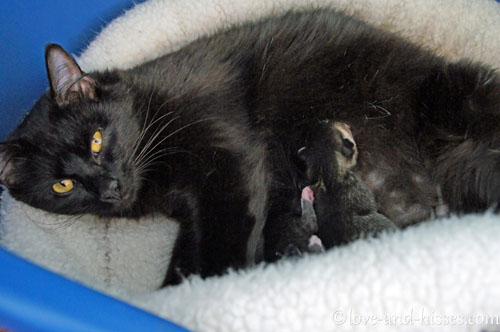 Warning: there are a LOT of wee pink kitty toes in this post. 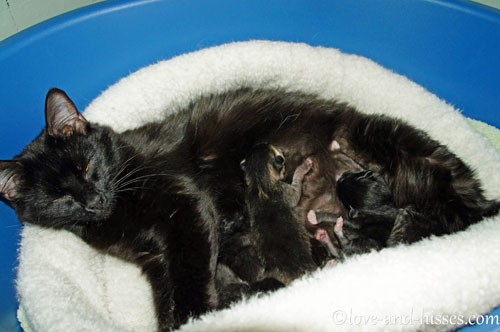 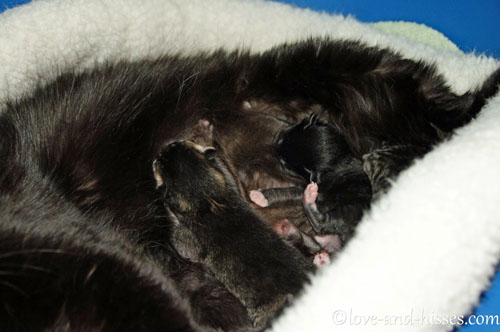 Every time I step into that room, I have to forcibly restrain myself from squooshing those babies. 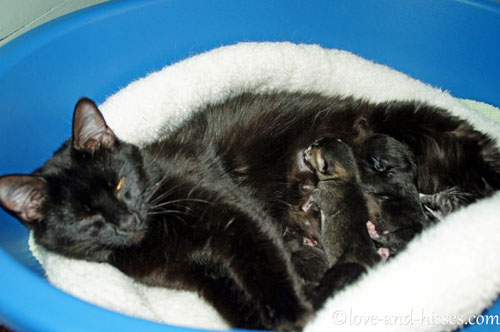 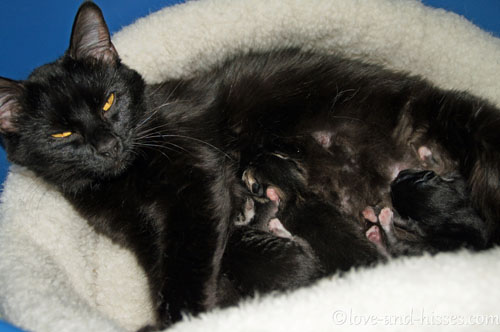 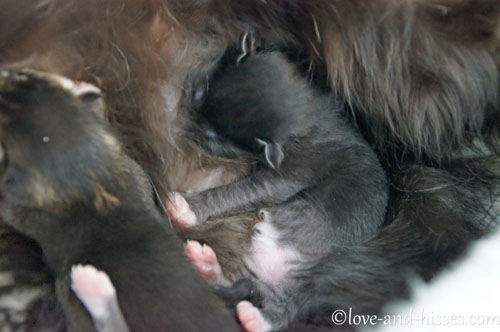 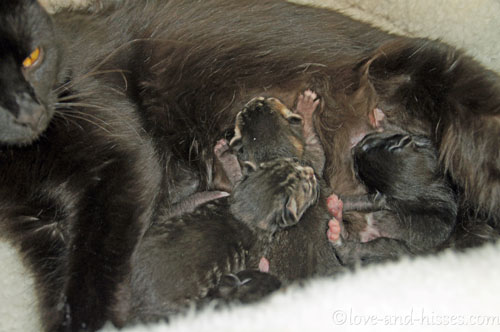 At this point, I fainted dead away from the cute. 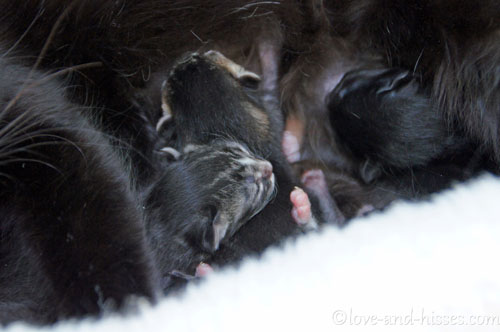 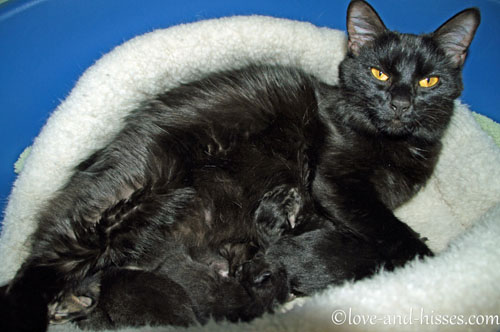 Such a proud mama. 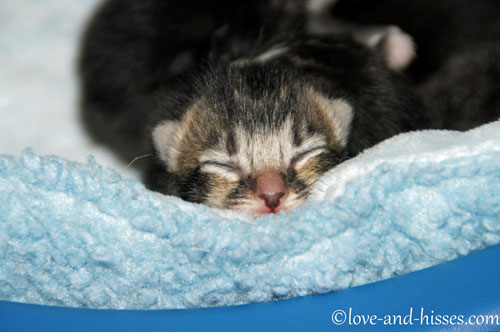 Oh, come on. Seriously? Are you TRYING to kill me? 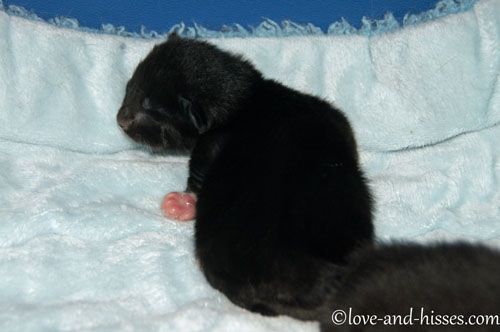 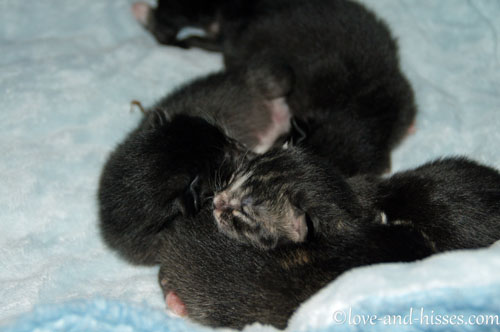 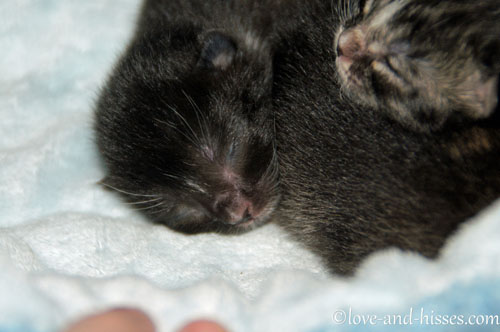 That white line on girl tuxie’s face is getting fainter by the day. I hope it doesn’t disappear, it’s so convenient for telling her apart from her tuxie brudder!

Fred’s calling the babies “The Meatballs” because he says they’re as big around as they are long. Kate’s doing a good job keeping those babies well-fed, that’s for sure! I weighed them again yesterday, and I’ve started a chart for their weights at the bottom of this page. I don’t plan to weigh them every single day, but probably every other day or so. 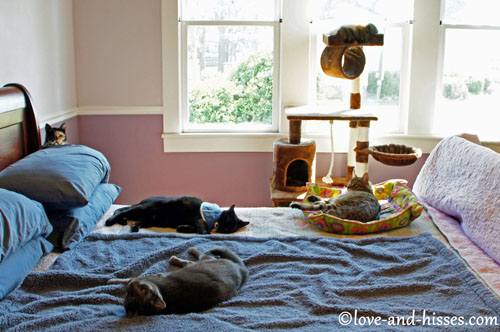 Five kitties! Jake in the front, Tommy (wearing the blue “cape”), Miz Poo hanging out behind the pillows, Corbie in the cat bed, and – hard to see but still there – Alice atop the cat tree.

What used to be the guest bedroom (downstairs) is now my bedroom. What used to be my bedroom (upstairs, directly over the former guest bedroom, now my room) is now Fred’s room (yes, Fred and I sleep in separate rooms, no we’re not on the verge of divorce, we’ve done it for something like 12 years now and it works really well for us. EVERYONE should have their own room, especially light sleepers (Fred). I don’t exactly sleep alone – last night I slept with five cats on my bed. Luckily I’m not a light sleeper.)

What used to be Fred’s room is now a cat room/ extra foster room for when we have a second set of fosters. We don’t have guests very often, but when we do, they’ll sleep in my room and I’ll sleep in one of the foster rooms on a roll-out bed. The cats aren’t sure of what they think about all this moving around nonsense, but they DO know that they REALLY like having me in the guest bedroom. It’s always been the favorite room in the house because it’s the sunniest and the warmest (or coolest in the Summer), and now they have my bed to sleep on.

Corbie, especially, is SUPER excited about this turn of events. He climbs up on my bed several times a night and either squeaks his excited, squeaky meow in my face, or nibbles on my fingers, then he throws himself onto the floor and scampers out the door. He’s such a nut.

Previously
2012: Newbery gets a back rub and thinks maybe he likes it.
2011: (So RUDE, snapping a picture of a poor pregnant lady from behind!)
2010: Sometimes another kitten will join in on the howling, and OH their hearts are just breaking at the injustice of not being able to get through the door, they are PERSONALLY insulted at this turn of events.
2009: Here we go, all seven present and accounted for!
2008: No entry.
2007: Their evil chicken talons don’t poke holes in the kiddie pool?
2006: No entry.
2005: No entry.