Even Fred, who prefers older kittens, because they’re more playful and less needy, has been charmed by this litter. They’re at that perfect age, where they’re on the brink of figuring out things, and everything is super amazing to them. They get startled and go hopping sideways at each other, they see the toy and they want to smack it, but every so often how to do it is just beyond their capabilities.

Yesterday I went up and spent time with them in the afternoon when the sun was coming through the windows, and they were running around playing, and every now and then one of them would wander through a beam of sunlight, and they’d stop and you could just about see the “Hey, this is kind of nice!” thought bubble over their head and they’d flop down and roll around on their backs.

I got the list of names from the shelter manager, and so the naming will begin. Like I said yesterday, I’m going with an old-fashioned naming theme (I’m pretty sure the brown tabby’s going to be Ezra), but I also might toss some names of Alabama towns in there while I’m at it (I like Bessemer for the gray tabby). I’ll let you know their names when I know their names! Here we go, all seven present and accounted for! Note the buff tabby’s protective paw. He’s all “YOU WILL NOT TOUCH MY FOOD!” 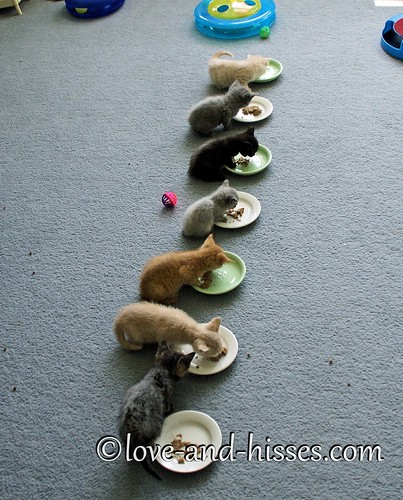