Innernets, please say a hearty how-do to our newest fosters. 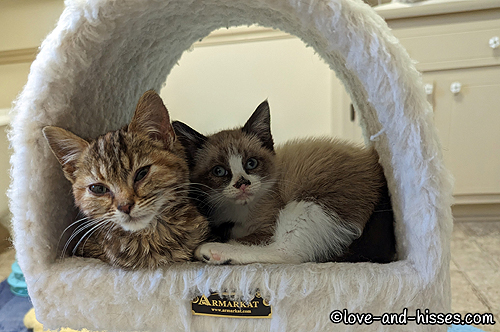 Torbie Cinnaspin (Cinna) on the left, snowshoe Linzer (Linny) on the right.

That picture was taken the day we got them, December 17th. They came to us from another foster who was worried about them not gaining weight. A couple of days of fluids and food shoved at them 7 million times a day, and they perked up and started packing on the ounces.

(Side note: Cinnaspin and Linzer are types of cookies, so these two fosters are The Cookie Girls.)

They’re just over 8 weeks old now – estimated date of birth October 30th. They’re not at all related; Cinna (torbie) was the survivor of a litter that was attacked by stray dogs. Linny (snowshoe) was a single turn-in at our local animal rescue. They needed friends, so they got each other, and they’re the best of friends. 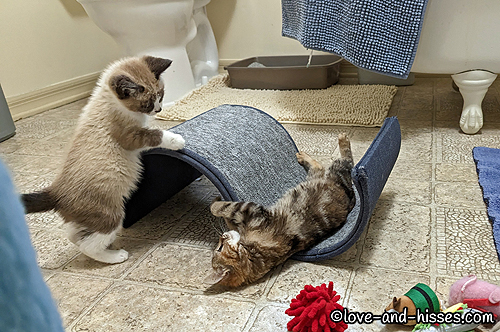 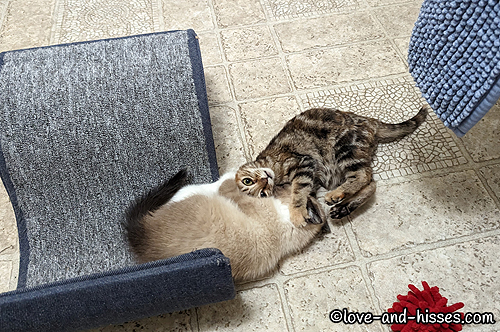 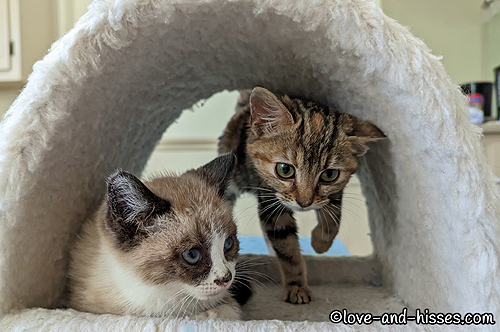 They play together, and snuggle up together.

For now, they’re spending their days in the big bathroom, and their nights in a (large) cage in the corner of the dining room. (This has led to me repeatedly pointing out JUST how convenient it would be if our dining room had doors, so we could shut them. I will keep mentioning it until it drives Fred flat out of his mind and he makes it happen. Or – more likely – until he starts getting quotes, we find out how much it would cost, in which case I’ll complain a few times and then drop the idea.)

Once Kim, Nacho and Francesca are gone, Linny and Cinna will move into the foster room. Los Gatos Hermanos and the Cookie Girls haven’t met each other. Unless there’s a situation like the one with Mike, where a tiny kitten needs a mother and siblings, I prefer to keep new fosters isolated for 2 – 3 weeks. They both seem perfectly healthy at this point, 10 days in, but you never know when some illness can pop up, and Kim and her girls are so healthy that I don’t want to expose them to anything, especially with Kim going home in another week and a half. 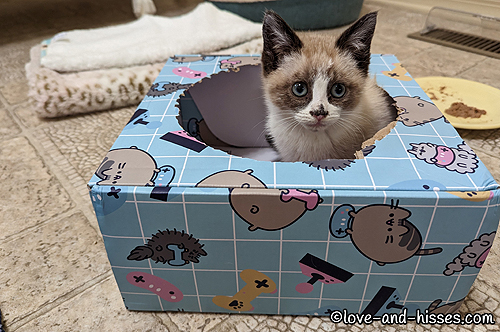 Linny in a box.

Linny tends to be timid and DOES NOT like if you stand over her and reach down for her. If you’re sitting, you can lure her over with a toy (she’s a feather teaser fan), and usually when she’s close enough I’ll pick her up and cuddle her, or put her in my lap and pet her. She clearly likes it, she just needs to get over her initial fear. 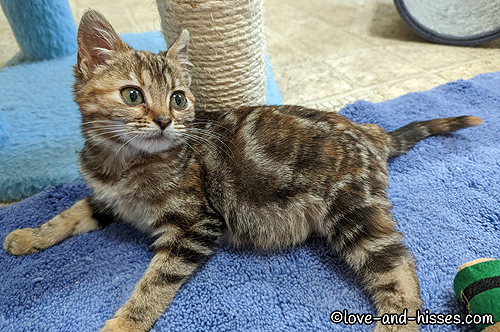 Cinna shows off her swirls.

Cinna absolutely ADORES being petted. When I sit down, she almost always stomps right over to me, purrs madly while I pet her, and then flops onto her side for a belly rub. She doesn’t want to sit in my lap, she doesn’t particularly care to be cuddled, but she would love to be petted all the live long day. 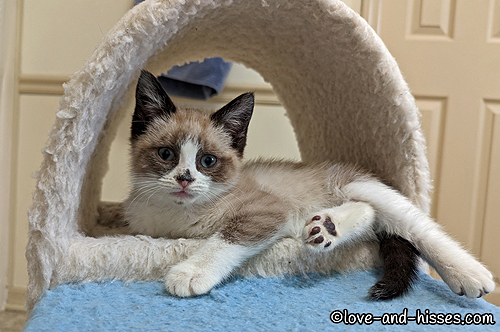 Linny shows off her beans.

So that’s what’s going on now – we’ve got two foster situations going on at the same time, and I love ’em all. 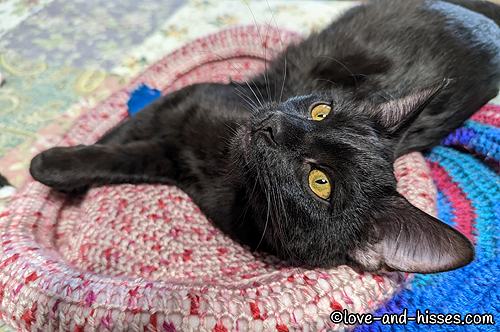 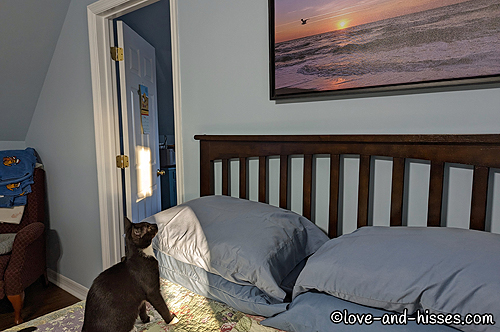 Nacho just KNOWS that one of these days she’s gonna get that seagull in the picture. 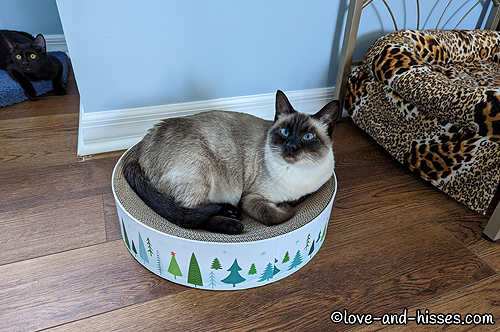 Kim has a rest. She is just so PRETTY. All three of them are! 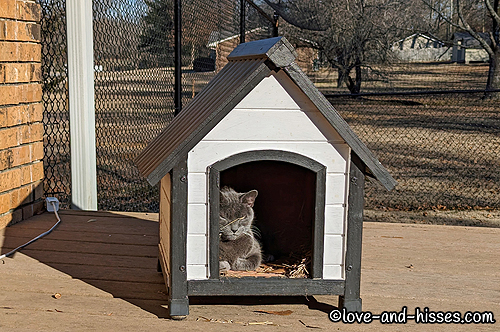 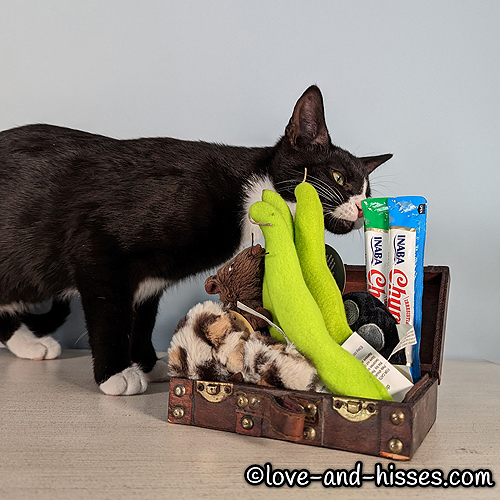 While I was trying to get Saul’s “adopted” picture yesterday, I got this outtake – Saul was making sure his suitcase was properly packed.⁠

To answer the many of you who asked: yes, Saul’s green bean went home with him; I put it in the carrier with him so he’d have something familiar as comfort during the ride. The three beans in the suitcase were replacements that I put in his bag of toys. When I post “adopted” pictures, whatever you see in the suitcase went home with them. (Usually it’s whatever’s in the suitcase plus several more toys. I like to send their favorite toys home with them along with toys they can share with their new siblings, and they don’t all fit in that suitcase. I don’t send the actual suitcase home with them, it’s just an excellent photo prop, but the toys and the Churu are tucked into a paper bag with their name on it.) 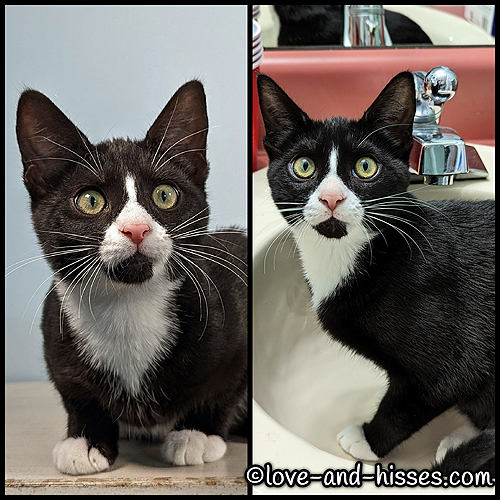 As I was sorting through Saul’s pictures to put together his “From hello to adoption” video (which will be posted this afternoon), I noticed something very interesting… On November 25th (left), he had several white eyebrow whiskers over each of his eyes. On December 13th, he only had that one jaunty eyebrow whisker over his left eye. I don’t want to make any accusations, but I suspect one of his sisters (NACHO) found those white eyebrow whiskers tasty. I guess it’s good he escaped with one of them intact!

YouTube link
Slow motion kittens (mostly Francesca and Nacho) doing what they do. (This video was made before Saul went home yesterday, obviously.) 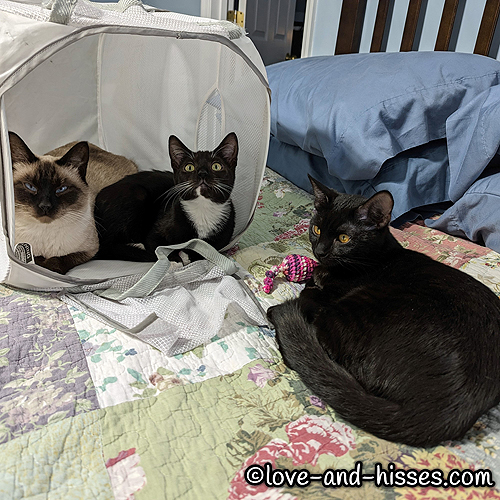 Guess who just heard they’re going to be in charge of doing the laundry now that Saul has gone home? Oh WOE, won’t someone save these girls from a life of drudgery?!⁠

(Mama Kim is adoption pending and will go home in about a week and a half. Her daughters Nacho (tuxie) and Francesca are still available for adoption – email Forgotten Felines of Huntsville at info (at) ffhsv.org to inquire. They’re terrible laundresses, but they’re awfully cute.)

YouTube link
Saul was adopted and went home yesterday evening, joining new kitty sisters Sara and Sophia. Here he is from the day we said hello to him (August 1st, 4 days old) to the day we sent him home (December 27th.) Happy life, sweet boy. ❤ 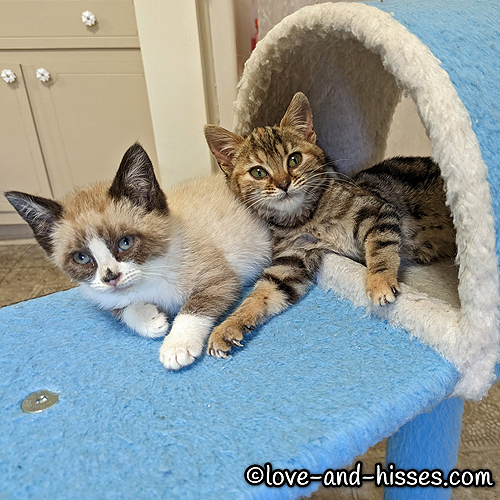 Good night innernets. Get some rest – tomorrow you get to meet these little cookies.