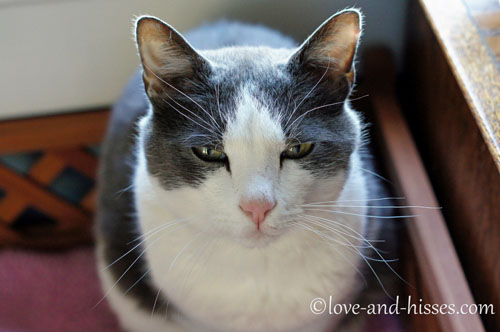 On Friday, we said goodbye to Joe Bob. He hadn’t looked right to me in the previous week or so, but the vet could find nothing wrong with him. We had started to chalk it up to the fact that he was getting older but Friday morning he crashed, hard. We were able to get him to the vet, but there was nothing they could do for him, and so we made the decision to let him go.

Joe Bob started his life as the kitten of a feral mother. He and his siblings were trapped by Kathie and Winnie, and Winnie shared these pictures of a baby Joe Bob with me a few years ago. He was named Moonman. Winnie fostered him for a while, and then the whole litter went to Petsmart. Everyone except Moonman and his sister Moondance were adopted, and after a while they were beginning to annoy each other and needed a break from the cage, so they came to us. You can read the first post about them here.

They were a couple of sweethearts, and it wasn’t long before they got to have the run of the house. We nicknamed him Joe Bob pretty quickly, and nicknamed Moondance Myrtle. Moondance/Myrtle was with us for about a month, and then headed back to Petsmart. Joe Bob had developed a urinary tract infection (fun fact: the vet said that he had the smallest bladder she’d ever felt in a cat), and so he stayed with us for a few more weeks. He became best buds with Sugarbutt and Tommy, who were about his age. They played together, ate together, and even slept near each other.

At the end of February, space at Petsmart became available for Joe Bob, and although we’d gotten pretty attached to him, off he went. He sat at Petsmart for what seemed like forever, but eventually he was adopted. After a little while he was returned, and he went back to the shelter.

Over the next year, he came up in our conversation pretty regularly, and we’d always talk about what a wonderful boy he was.

At the end of January 2008, we said goodbye to Spot, and the very next day Fred suggested the idea of adopting Joe Bob. NOT as a replacement for Spot, of course, but because we felt that the best way to honor his memory was to adopt another cat and give him a good home. I was amenable to the idea of adopting Joe Bob, but wanted to wait a few weeks so things could settle down a little. However, Fred left work and drove out to the shelter that very day and adopted Joe Bob.

We kept him in the foster room for a few days before opening the door – but even then, Fred had to go get him and bring him out. It took him a few more days to discover that he could sit at the side door and watch the birds, and a while longer than that before he discovered the cat door in the laundry room and ventured through it. 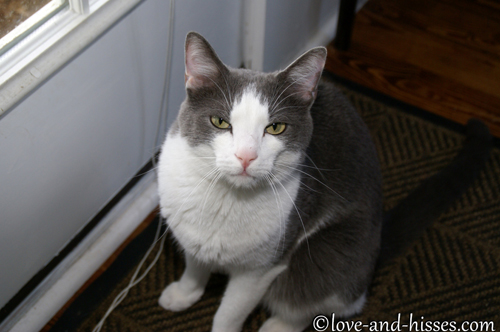 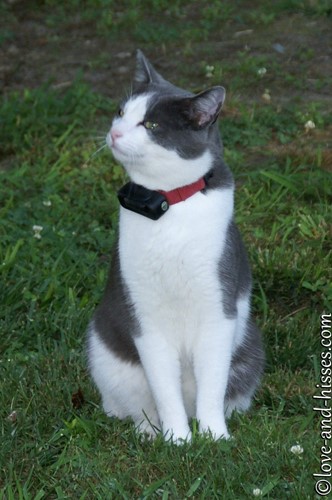 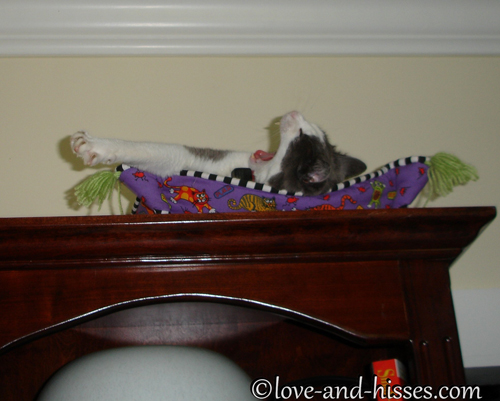 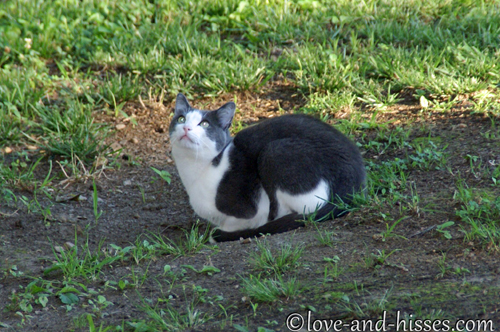 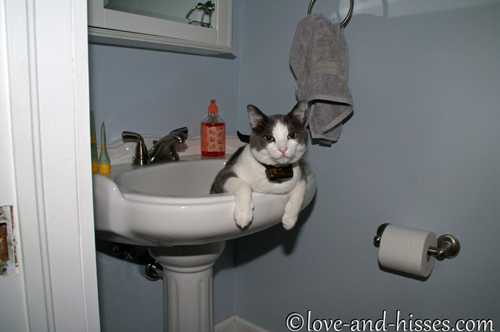 He loved being outside more than just about any cat we’ve ever had, at least in his first several years with us. He was the first one out the door in the morning, he’d spend all day outside even when it was rainy and cold, and he was the last one to straggle inside at night.

Unfortunately, he and Tommy and Sugarbutt never became the buddies they were when he was our foster. In the year he was away from us, Joe Bob developed a dislike for having other cats too close to him, and if they invaded the bubble, he had a very loud scream that he’d unleash and terrify us all.

He was all talk, though – he never went after another cat, and in fact was conflict-avoidant. He was a people lover, though, and you couldn’t do anything outside without him following you around and talking to you. 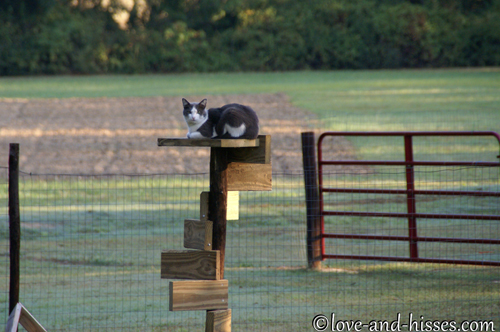 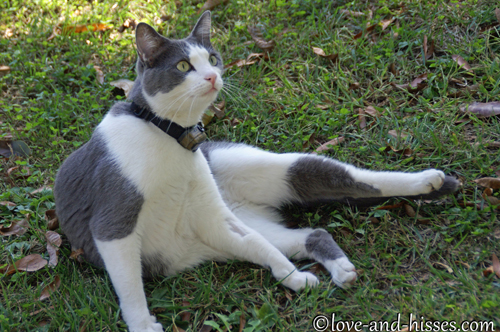 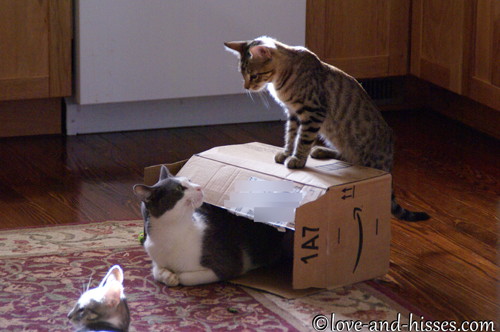 He wasn’t a big fan of the foster kittens, but he wasn’t mean to them, either. He’d mostly avoid them, but if they got all up in his space, he’d be patient with them. 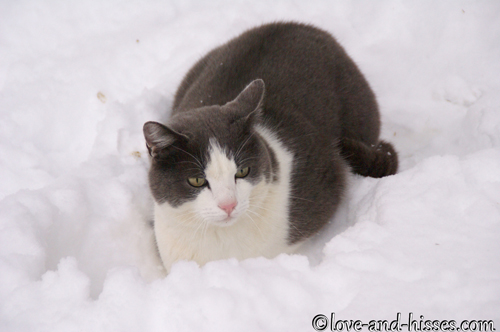 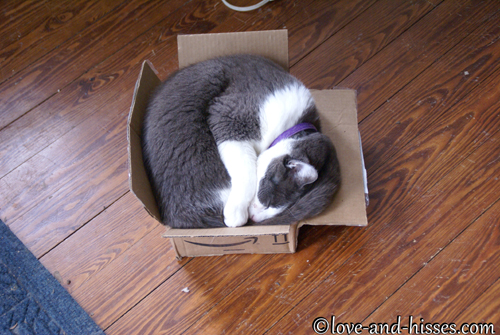 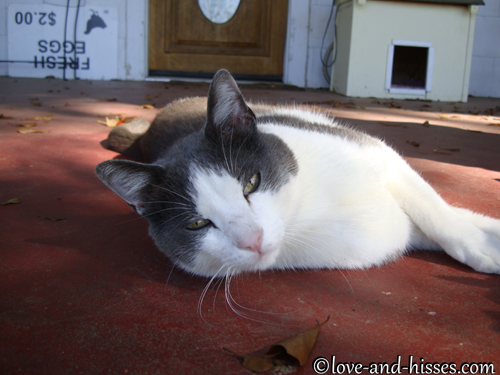 He would drive me crazy because every so often – maybe once every couple of weeks – he would climb over the fence and walk to the side door and wait for me to let him in. Occasionally, if he was feeling really wild, he’d go to the front door and wait for someone to let him in. He never did it very often, and I swear he always waited until I was watching before he did it, but I worried for years that he’d go toward the road or get lost in the woods behind the property – but he never did. I guess he just wanted us to know that he could if he WANTED to… he just didn’t want to.

In those times I’d call him by his full name – Joseph Robert – and I’d tell him what a naughty boy he was, and he’d just look up at me and give me the blinkety-blink Eyes of Lurve.

I also called him Smilin’ Joe because, well, look at that smile! 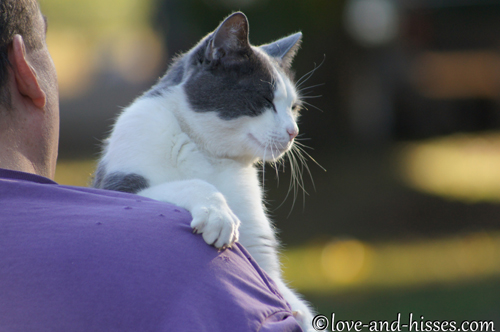 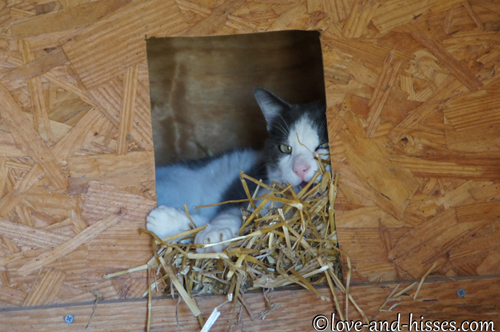 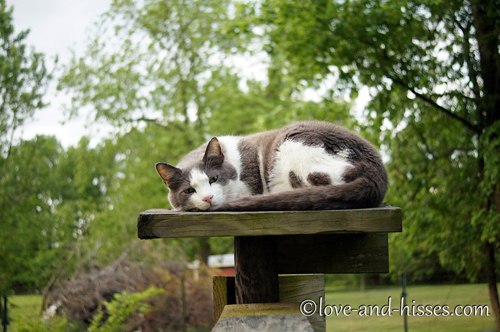 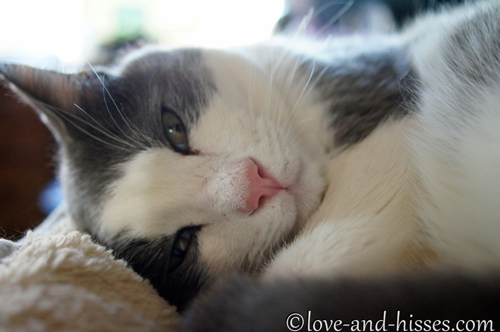 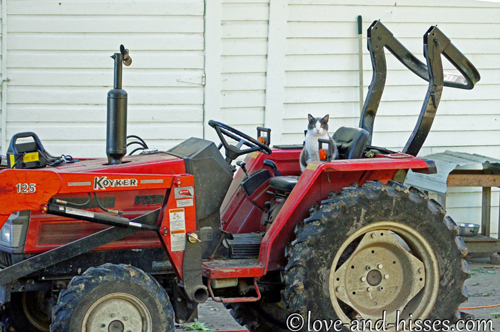 He had the most beautiful eyes, the prettiest pink nose, and the softest, silkiest fur. He was a big cat, tall and long and all muscle. He was a true gentleman, sweet and friendly, a bit shy, but wanted to be friends, and was always willing to be petted and tell you about his day. I loved seeing him stretched out on the cement pad in the back yard or curled up on his platform in the back yard with a blissful smile on his face.

He was never the most in-your-face cat, and I know he was overshadowed here on the blog by some of the other cats, but he was always present here in our lives, whether pressing quietly against my leg to be petted, talking to us and waiting to be picked up, or just sitting and giving us the Eyes of Lurve. 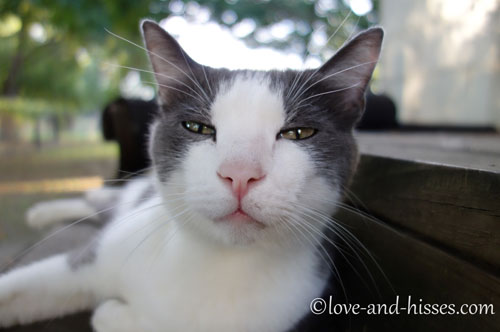 Goodbye, Jobey-Joe, you gentle soul. We miss you.

I am taking the rest of the week off from the blog. I’ll be back next Monday with the Year in Review post.