We have an update on not just one, but TWO former fosters! In December 2012, we had a gorgeous black kitty with gold eyes, named Kohle. He had been at Petsmart for quite a while, so came here for a few weeks for a break. He went back to Petsmart in mid-December, and Selena adopted him and he is now Flynn.

Fast forward to the following August, and Selena adopted one of Khaleesi’s kittens, Puff, who became Hook. The two boys became fast friends, and still adore each other. I wish you could try to relax, Hook! 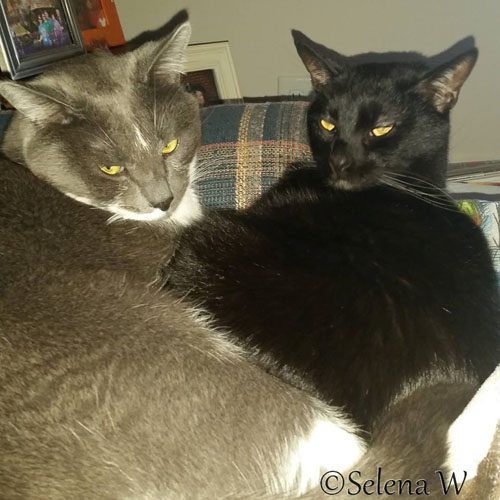 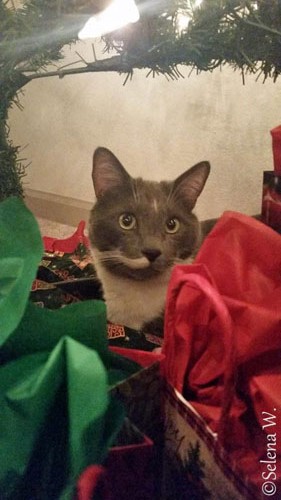 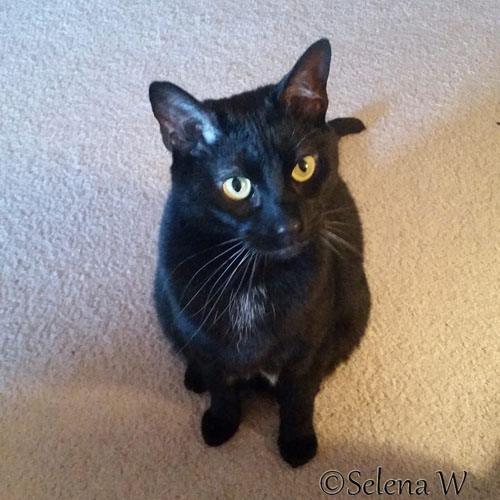 Flynn still has those gorgeous eyes!

Selena said: I can’t believe I’ve had Flynn for 3 years already. He is still the sweetest cat. He even decides to be a lap cat every once in a while. Especially when Hook is being a brat. Otherwise he and Hook are still the bestest of buddies and pretty much could care less about me unless it’s time to eat. 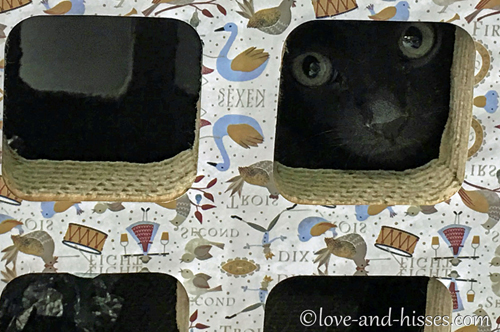 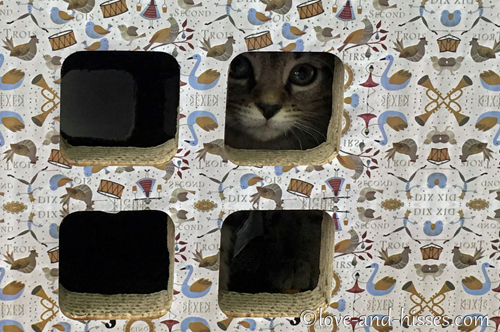 “It almost sounds like… is there something on the roof?!” 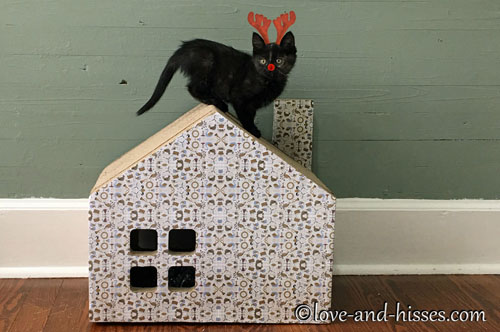 “I think I lost the old guy, the sleigh, and those name-calling jerks!” 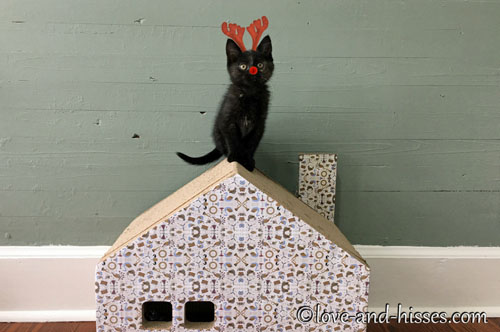 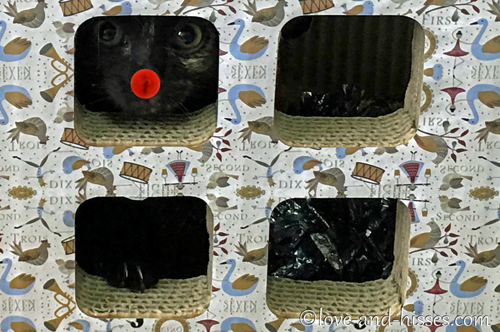 “Okay, you guys, scoot over and make room. I want a bed by the window. I’m moving in!” 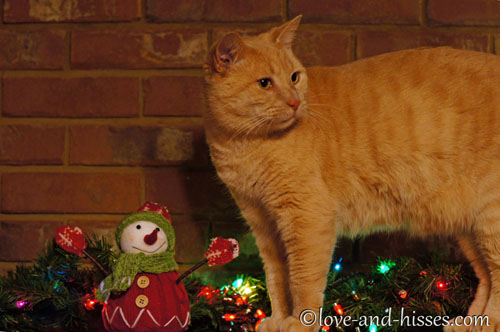 “Whatchoo mean ‘don’t push the snowman off the mantel’? Why else did you put me up here?!” 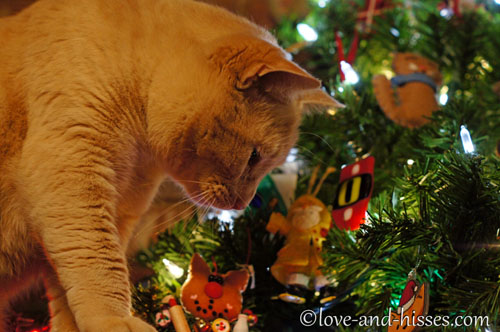 Stefan, checking out the tree. 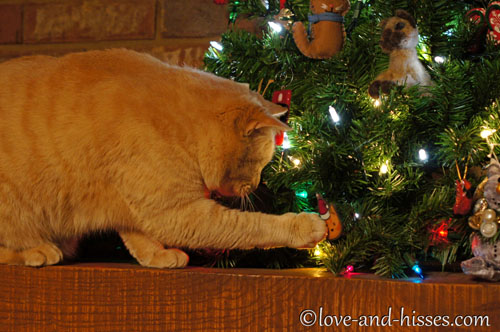 And batting at the ornaments (of course). 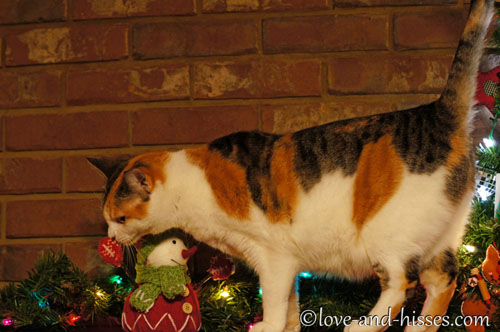 Alice, checking out the snowman (but she’s a good girl and didn’t try to bat it to the floor). 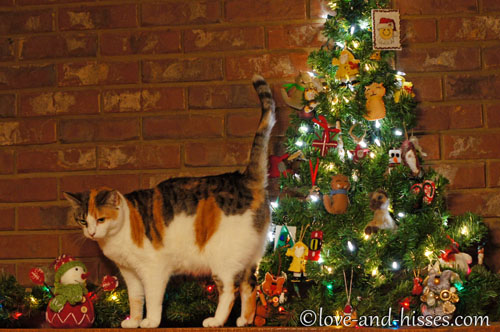 As you can see, our tree is a small one. It’s actually a wall tree, but the place in the front room where we’ve put it in the past is now covered with cat shelves (of course). It was only last week that I realized I could put it on the mantel in the dining room. So the dining room is filled with decorations and lights and our little tree, and it makes me happy whenever I walk through there! 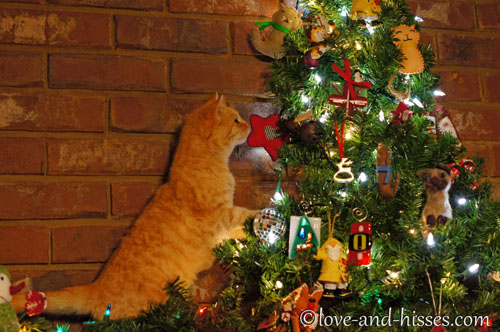 Pink, checking out the tree. 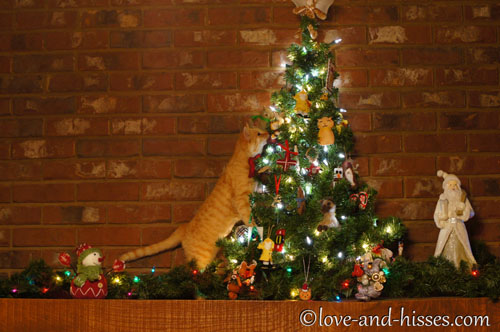 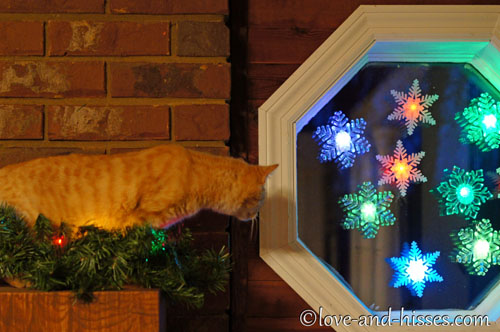 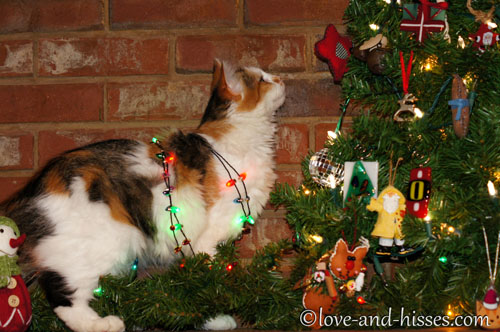 Adele’s turn to check out the decorations. 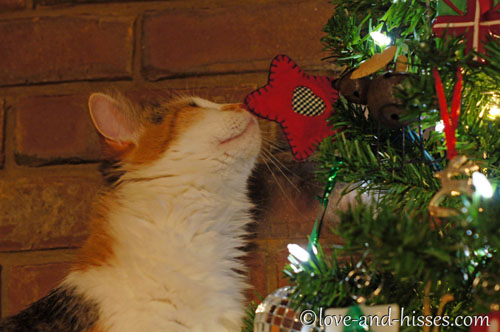 She really liked this particular ornament. 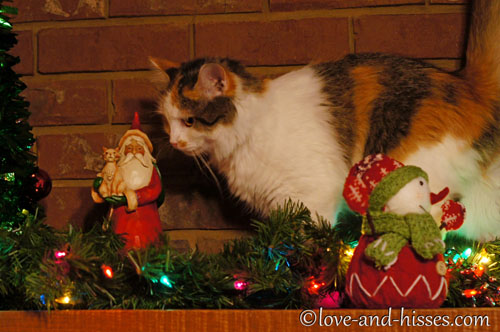 And then she wanted down.

I’m actually a little surprised that none of the cats we put on the mantel have been back up there to check it out again. I guess they’re not as excited by decorations as I am!

There will be a post up tomorrow, it’ll just be re-posts of previous years’ holiday cards we’ve sent out, along with the one we sent out this year (so that those of you who didn’t request a card still get to see it).

Charlene posted the link to this video, and I keep going and watching it, and laughing. I think it’s the perfect video for today!