I’m just not convinced Ivy’s pregnant, I said. Can we get her in for an exam? About 10 minutes later Michelle let me know that I could drop her off at the vet right then, so I grabbed Ivy, stuffed her into a carrier, and was on my way.

Around noon, the vet called. Our girl Ivy? She had an ultrasound. And? 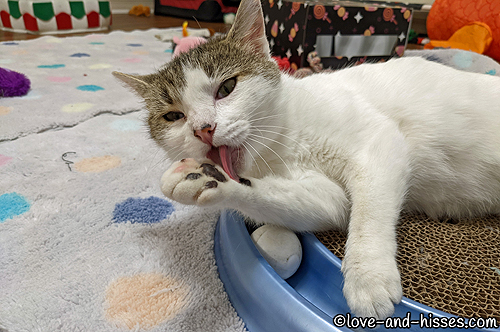 Not sorry, the little bamboozler. 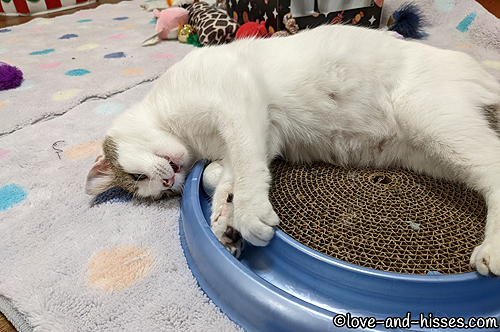 Just hanging with her favorite toy, doing what she do. 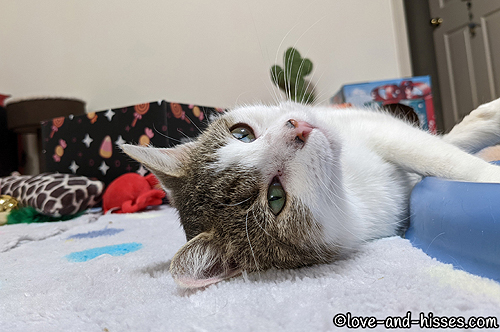 Thinking about how gullible humans (well, THIS human anyway) are. 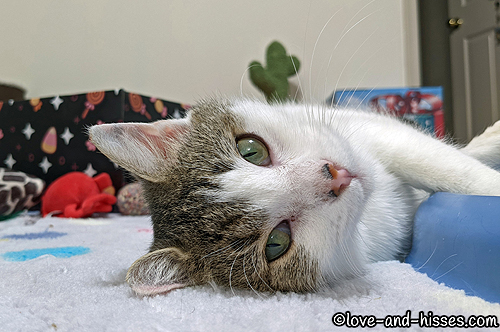 I was too focused on how cute she is.

So between the fact that Ivy hadn’t gained any weight in the previous 5 days (in fact, had even lost a tiny bit), doesn’t have that voracious pregnant-mama appetite, and really doesn’t LOOK pregnant, just a little chunky, I started to think that she wasn’t pregnant. I’ve had enough fakers at this point (Ivy makes faker #7) to know that when I’ve had a cat for two weeks and start thinking “But is she realllly pregnant?”, then chances are good that she’s not.

“You should have taken her to the vet sooner!” you might be wanting to say. Because you missed the part where she was SEEN by a vet before she came to Forgotten Felines. That vet said she was pregnant and would have kittens in 2 – 3 weeks. And I’m not judging the vet because this is the THIRD faker I’ve had who was seen by a vet before I got them and declared to be pregnant. So the fact that I can’t always tell when a cat is pregnant is NOT ON ME, people. If a trained medical professional is bamboozled by a skilled FAKEY FAKEY FAKER, then clearly it’s not actually that easy to tell.

While this is a little bit of a bummer – how CUTE would her kittens be?! – it’s also great news for Ivy. She doesn’t have to go through all that birthing and mothering stuff; she can just stay the baby!

So Ivy is scheduled for her spay surgery (they also shaved her belly to check for a spay scar and there wasn’t one) on January 17th, though they’ll call if someone cancels before then, so she may end up being spayed earlier.

Fred – who was very much NOT looking forward to being alone with a cat in labor – is very relieved. And I promised that I wouldn’t take any other possibly-pregnant fosters until I get back from my trip in January.

For now, Ivy will hang out here with us. If you’re interested in adopting her, better speak up – you can message Forgotten Felines of Huntsville on their Facebook page to inquire.

Ivy is about a year old (maybe a bit younger), a very sweet, snuggly lapcat who loves to make biscuits and who’s a bit of a goofball (you might have noticed.) She’s had very limited exposure to Charlie (a couple of visits from him), and I believe she’ll be fine with other cats as long as there’s a slow introduction. I don’t know how she is with dogs, but my belief is that she’d be fine with a slow introduction to dogs as well. 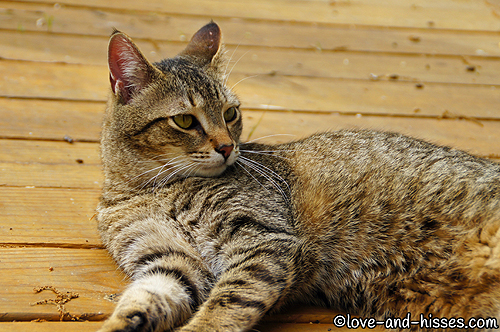 An old picture of camera-shy Dewey, so y’all don’t forget what a gorgeous boy he is. 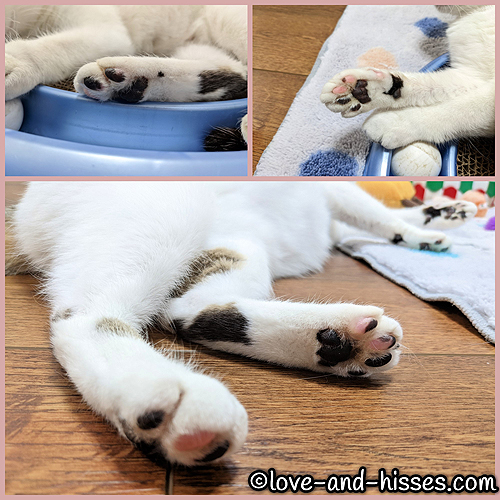 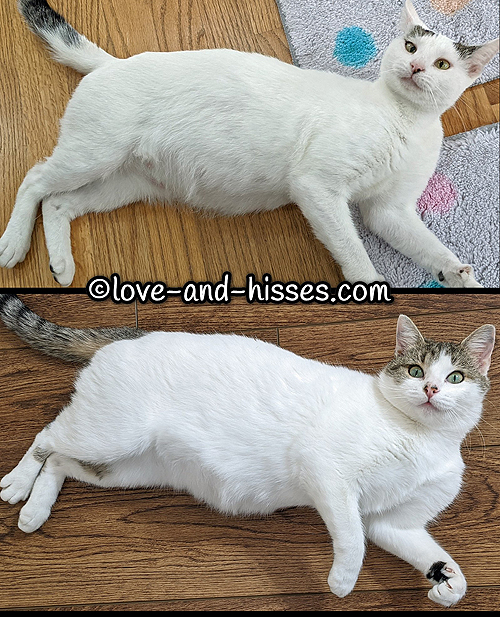 A comparison photo for you. Top: Canasta. Bottom: Ivy. ⁠

That picture of Canasta was taken ONE MONTH AND THREE DAYS before she gave birth.⁠

They’re two different cats with two different body shapes but I still think we’ve got a way to go before Ivy has her kittens (standard disclaimer about how I’m not 100% convinced she’s pregnant because I won’t be until she has actually birthed at least one kitten, and even then I might be skeptical.)⁠

Note: Ivy saw a vet before she came to rescue. The vet says she’s pregnant. No idea when she’s due or how many kittens she’ll have; I haven’t seen any belly movement yet (and you better believe I’ve been looking.) The standard rule is that you see/feel belly movement in the last 1 – 2 weeks of pregnancy, HOWEVER I could see it in Canasta a full month before she gave birth. Ivy’s nipples are pale and there’s no milk yet.⁠

So there you go. (Further note: I have fostered 14 pregnant cats; Ivy will be the 15th. Every pregnancy is different.) 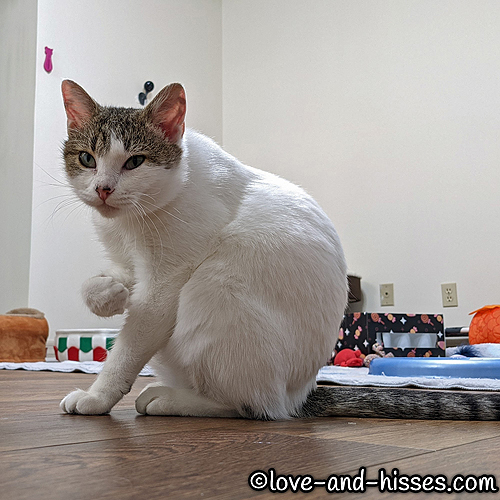 Ivy’s all “Come here, lady. I gots a knuckle sammich for you.”

YouTube link
Ivy lured me in under false pretenses. 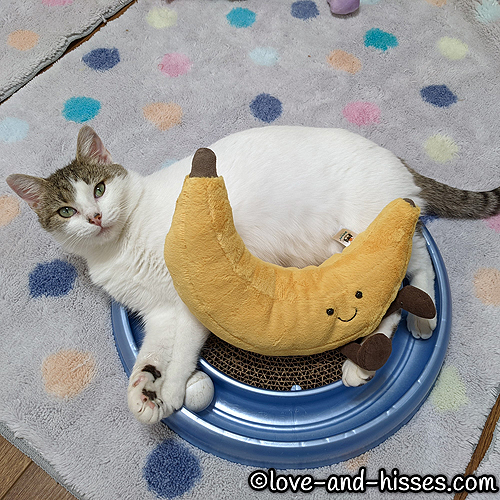 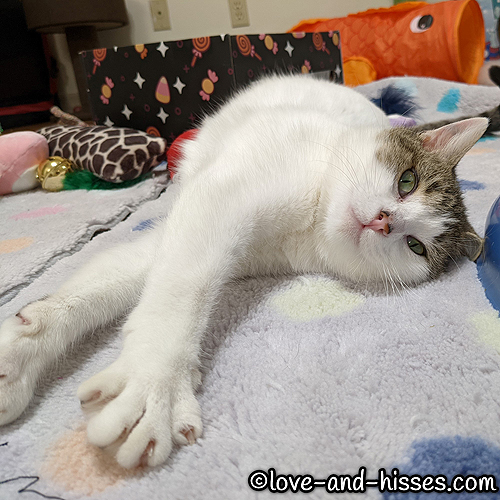