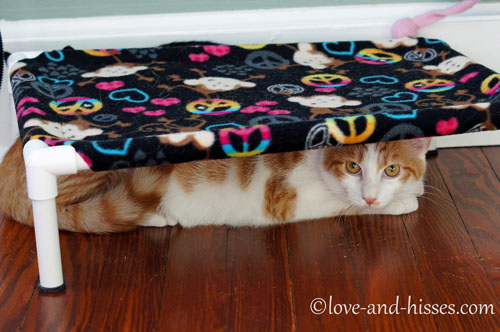 This is John Smith. He’s not alone under that Ham-mick… 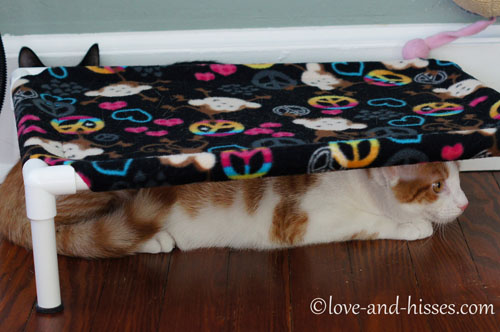 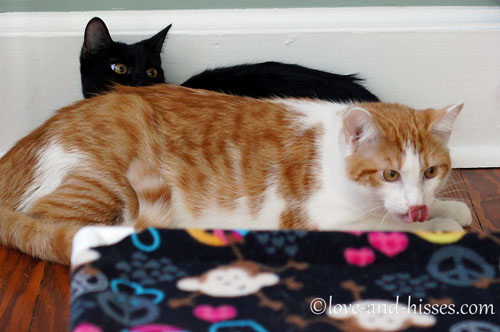 A better look at Tricki (Tricki is a girl; John Smith is a boy, if you hadn’t guessed.) 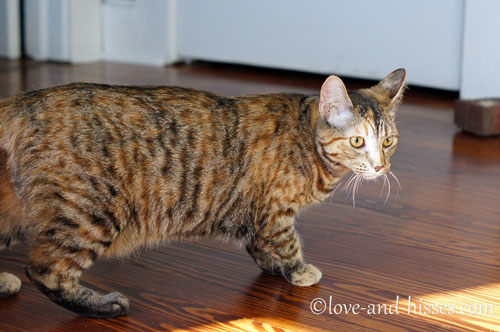 This is Bunnie. (Bunnie is a girl.) 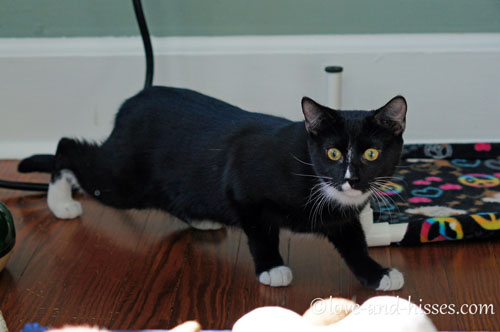 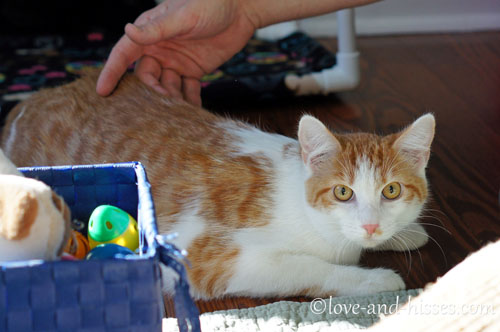 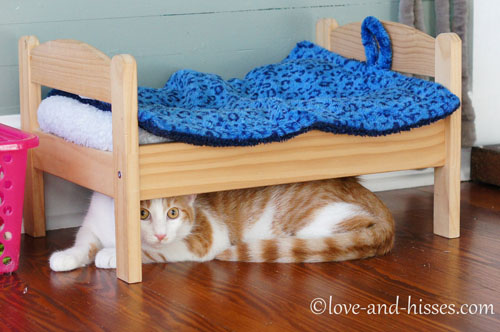 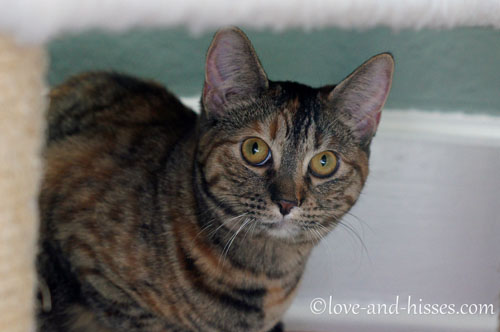 Bunnie checks me out. 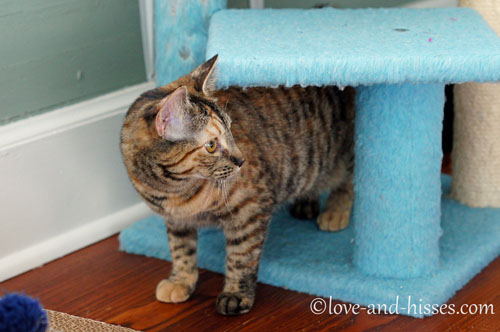 Bunnie has the coolest colors, doesn’t she? 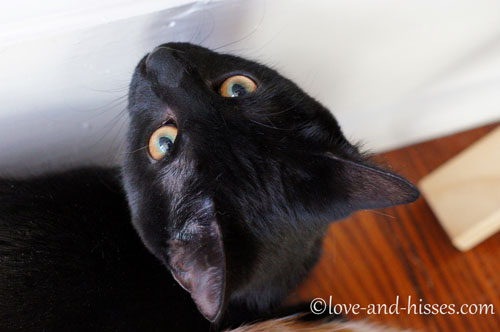 Tricki has soft, silky fur and (as you can see) stunningly gorgeous eyes.

All four of them were pretty nervous when I first got them home. Bunnie has relaxed enough that she’ll be a little jumpy when you first walk into the room, but then she runs right over for love. She hasn’t actually climbed into my lap yet, but it’ll happen pretty soon. Toto is right behind her – a little more nervous, but happy to come over for petting. John Smith is third in the friendliness category – he comes out for love sometimes, but more often he’ll wait ’til you come to him. Tricki is the scaredy cat of the bunch – she wants to hide behind the litter box, and I keep making her come out. She loves to be petted, but she’s so nervous that I have to keep convincing her that I won’t hurt her. It’s early yet, so I’m sure she’ll come around.

Also, the sound of the camera focusing makes them pretty nervous, so for now the pictures may be few, at least until they adjust.

Carmela spent Tuesday night walking around the house meowing, clearly wondering WHERE her siblings had gone. So yesterday morning I headed to Petsmart early and got her settled in the cage with Tony and Melfi. She wasn’t the slightest bit freaked out (though Tony hissed at her when I first put her in with him, then looked a little embarrassed.) Y’all have NO idea how much I wanted to bundle them all up and bring them back home with me!

I hope adoptions are plentiful this weekend, that’s all I have to say. 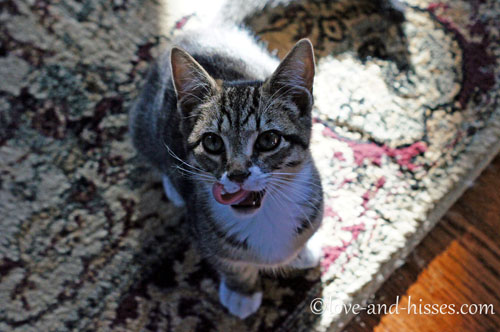 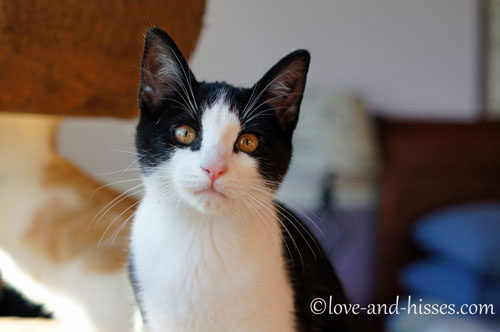 Meadow gives me her Stern Look for annoying her with the camera. 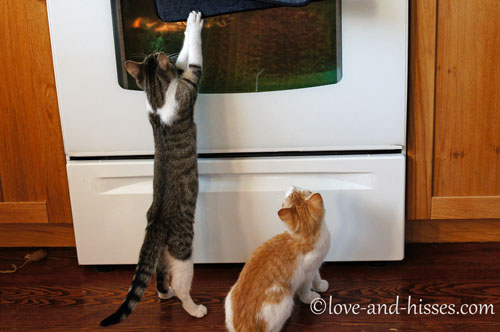 “There’s bacon in there! Come out, bacon! Come to me!” 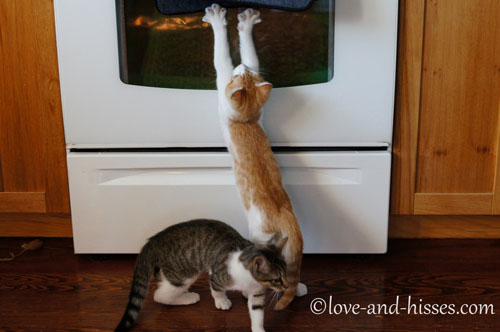 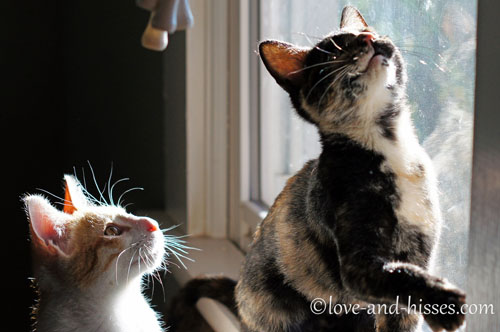 Paulie and Adriana in the sun. 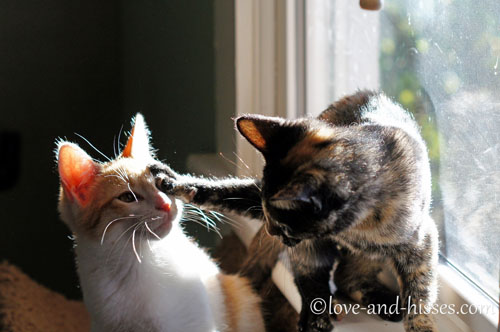 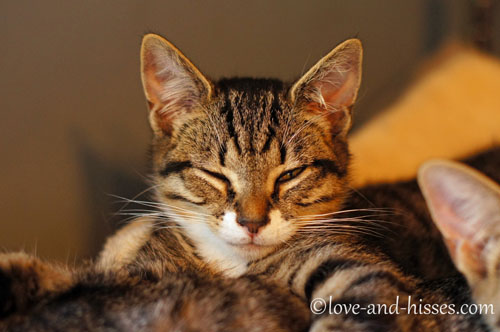 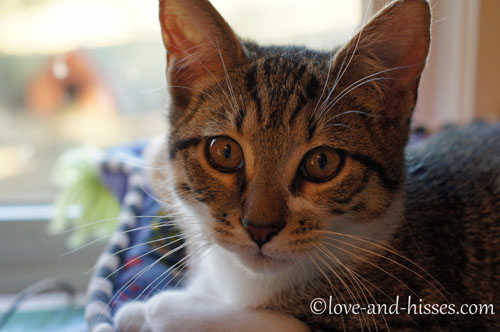 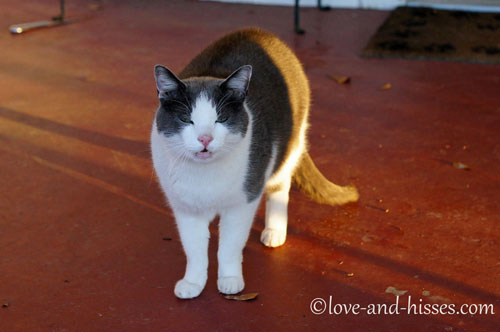 I went out to get the mail, and Joe Bob followed me onto the porch. Then he was like “It’s so COLD out here. I’ve made a terrible mistake. Please, lady, can we go back inside?”