See the cards I’ve received so far! I’ll add cards as I get them. (Please note: my scanner isn’t the best, so rest assured that all those cards look much better in person!)

Last Saturday when I announced on the Love & Hisses Facebook page that the Sopranos were going to Petsmart, I said Now that I’ve announced that, who do you suppose will be the one to get sick between now and Tuesday so that they have to stay with us a little longer???

On Monday, Carmela started acting like she didn’t feel well. Nothing alarming or terribly specific – she just wasn’t moving off the heated blanket on the couch, wasn’t playing, wasn’t much interested in eating. She was moving slowly. She didn’t have a temperature and wasn’t vomiting or having litterbox issues, just a general malaise. I let her stay out of the foster room Monday night – she slept on my bed, as a matter of fact. Yesterday morning she asked for some of Alice’s morning snack (Alice wasn’t inclined to share, so I gave Carmela her own plate, which she ate) and she moved around a bit more, but still didn’t seem 100%. So I decided to keep her with us for another day or two, just to be safe.

Apparently the moment I left the house with all her siblings, she started racing around, playing, and howling at Fred (probably asking him where everyone went!) So this morning I’m taking her to Petsmart to join her siblings.

The Sopranos got to Petsmart at 4. I put them in their cages (Paulie, Silvio, and Meadow in one; Adriana, Melfi and Tony in the other), and they weren’t thrilled, but they didn’t hide in the litter boxes (I hate it when they do that.) I went to dinner, ran a few errands, got home, puttered around. And at 7:20, I got the email that Adriana had ALREADY been adopted!

Hopefully this is a good sign – maybe they’ll all be adopted by the end of the weekend. Fingers crossed! 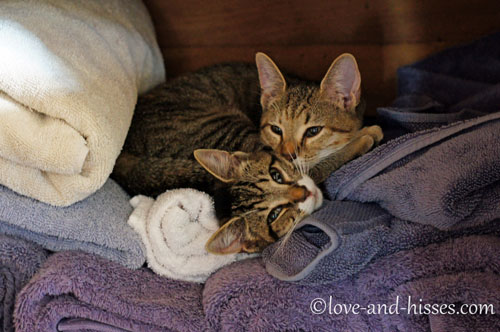 We have a washstand where we keep old towels in case we need them (they usually get used to wipe down wet cats or wet Freds). I don’t know how they KNOW the towels are there, but kittens always get the doors to the cabinet open and sleep in there. I’m sure it’s comfy! 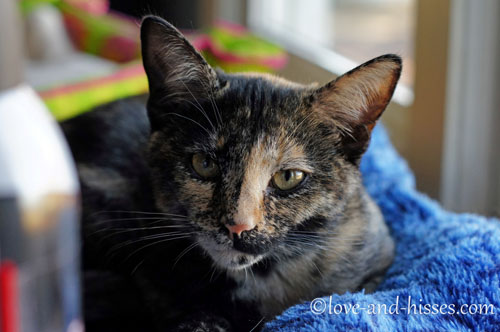 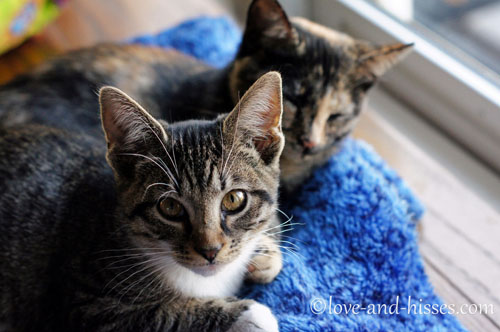 Nap time for Melfi and Adriana. 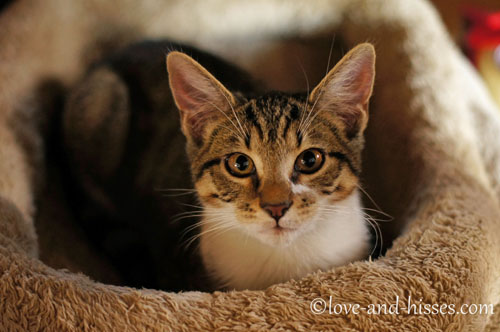 I love this picture of Silvio so, so, SO much. 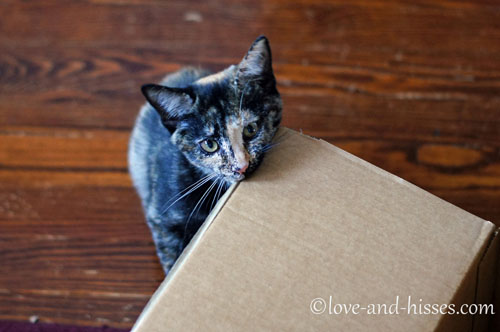 Adriana likes to make sure she gets her recommended daily allowance of cardboard. 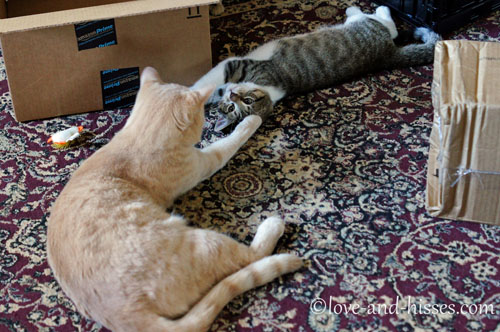 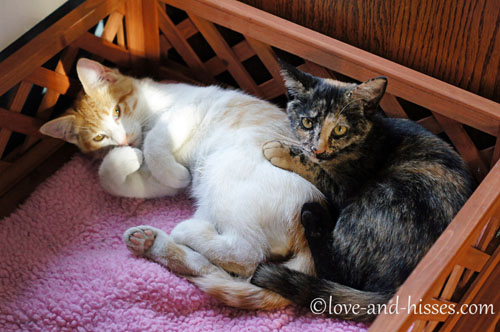 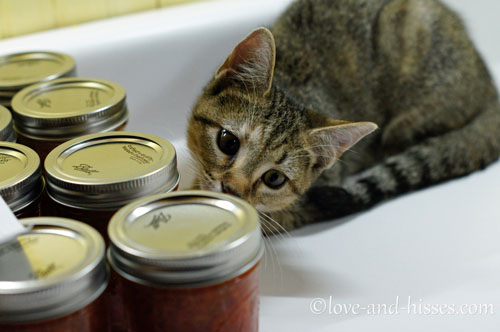 Despite being one of the smaller Sopranos, Carmela was the first one to figure out how to jump up on the counter. Here she is, inspecting a recent batch of carrot cake jam. 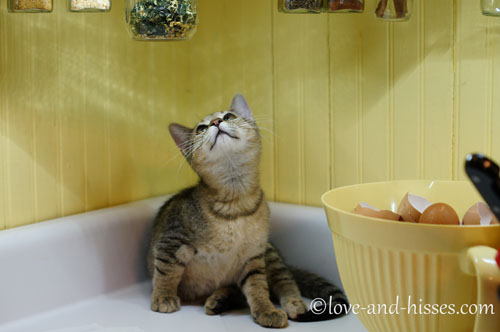 Checking out the various jars, hanging from magnetic strips (I was trying to make it so that there’d be less clutter on the counter. Here’s a tip: NOTHING will lessen the counter clutter. It’s always going to be there.) 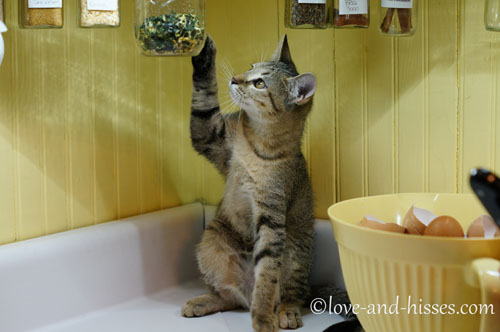 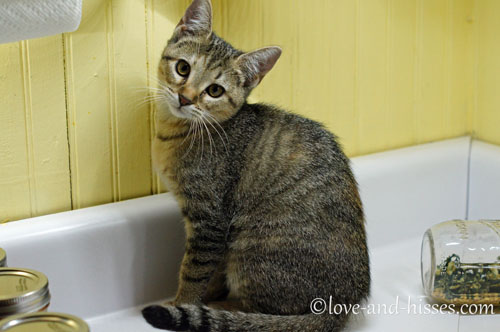 “Someone knocked that jar down, lady. I can’t imagine who would do such a horrid thing.” 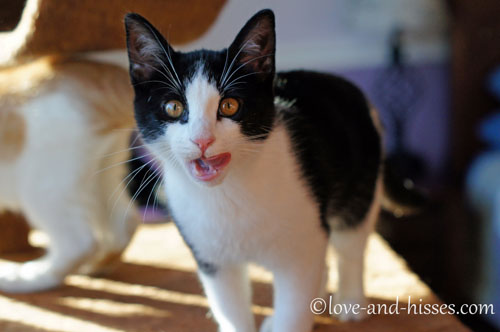 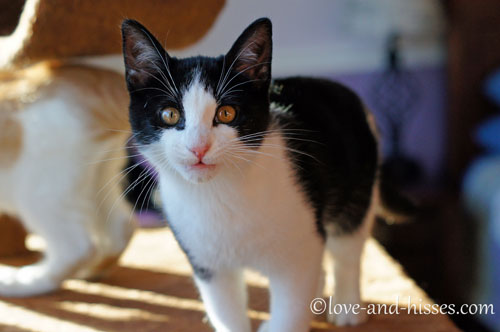 Beautiful, beautiful girl. And she knows it! 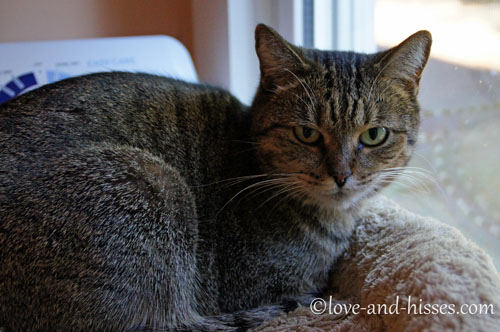 “Look, lady. It’s COLD out there. I’m not going out, and you can’t make me. I can see the entire back yard from here – that’s good enough!”