There are two things that has pretty much convinced me that Bolitar (who I’ll be calling “Buster” from here on out, because that’s what I call him in real life, and it’s too difficult for me to call him “Bolitar” here when I never do!) and Rhyme remember living here.

The second was when, not an hour later, I looked out the back door and saw Buster and Rhyme frolicking in the back yard with Jake and Elwood.

And I guess I should add a third: yesterday morning I glanced out the side door to see that Buster had climbed over the fence and was in the side yard. I coaxed him inside and put a collar on him (for those who don’t know, we have an invisible fence around the back yard and the problem cats wear collars to deter them from getting too close to the non-invisible fence, so they can’t escape the back yard), and he hasn’t escaped since. Brat. I’m not quite sure what Rhyme was doing here, but it kind of looks like a seductive dance, doesn’t it? There needs to be a feather boa involved.

Starsky and Hutch have now hit one pound. Hutch is one and a half ounces larger than Starsky, and that one and a half ounces is all in his big round belly. I told Fred that we should have named him Waddles McGee, because he waddles so when he walks – which is the MOST adorable thing to witness. (Yes, it could very well be due to worms – they’re both on dewormer – but they’re also at that age where they’re tiny and round little things. In a few weeks, they’ll start to lengthen and thin out, I suppose, so I have to enjoy the round stage for as long as it lasts!) 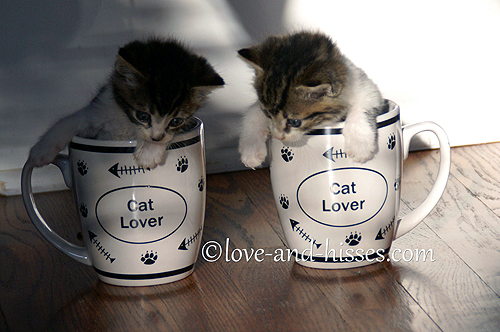 Small enough to put in coffee cups, big enough to escape them. I love this age!