A little over a year ago, we had this little muffin in residence. 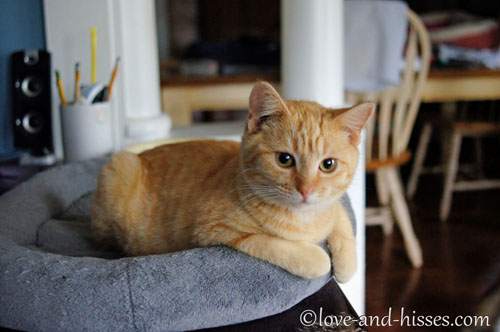 We named her Pink because we had a floofy girl in residence we’d named Adele, and Pink was the only powerhouse girl singer I could think of at a moment’s notice. (Also, I like Pink.) 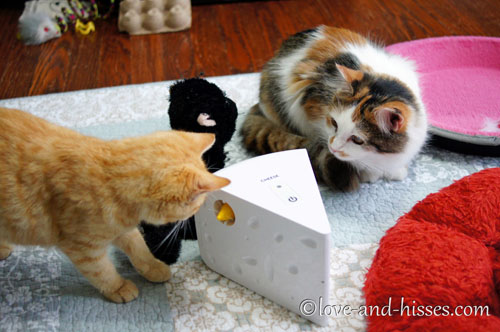 Pink and Adele, bonding over a new toy. 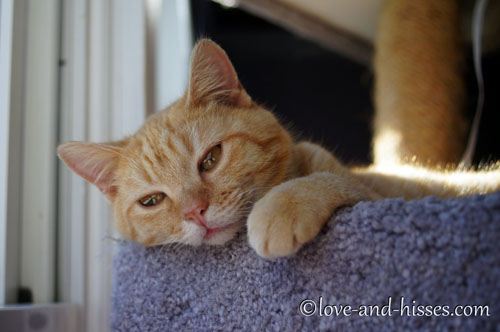 Pink (and Adele) went off to Petsmart, and Pink was adopted pretty quickly. She was renamed Tribble, and here’s what she looks like today! Tribble (formerly Pink) loves to play with Kai. She will hide and jump out at him when he passes by. He also loves playing with her. When he is gone from the house for any period of time, the first thing he does is look for Tribble.

Is that the SWEETEST thing, or what? I always worry a little about fosters who are adopted into homes with dogs, since they never have any exposure to dogs here. It always seems to go really well, though – as illustrated by Tribble and her BFF Kai!

(Thanks for letting me share, Kalyn – and give that sweet girl (and her brother Kai) a kiss from us!)

This cracked me UP:

The strangest picture showed up on my screen when looking at posts from years past. In the photo that was supposed to be Mr. Boogers with his trumped hair-do, (long before it was a thing last fall) I didn’t recognize this from any of your litters. I was gonna comment that flickr was linking to the wrong photo, and then it struck me… last fall, I found and added an extension to Chrome that substitutes random pictures of kittens for photos of Trump. It does not work consistently, my guess why has to do with how a photo is tagged or something, but I got a laugh. That’s from this post three years ago, by the way, and that continues to be one of my favorite pictures of Mister Boogers. Here it is, named differently, so that y’all can admire the fabulous Mister Boogers again. While I’m sharing pictures of him that make me laugh, here’s a random one for you. It’s not the best picture (it was taken back in 2006), but I think you can get the idea. (If you can’t tell, that’s Mister Boogers with a bubble over his head. He liked to chase bubbles, so we’d take him out into the back yard and blow bubbles for him. Oh, Boogie. I still miss that boy!) Dewey, keeping Stefan company – and giving me the hairy eyeball. Showing off his striped whiskers. On the landing, keeping an eye on the weird lady. Considering fleeing to his safe space. Newt – who I suggested “might” become an inside cat 10 years ago – spends 99% of his time snoozing in one of the cat beds on my desk these days. Of that time, he spends approximately 50% snoring so loudly I can’t hear myself think, 25% gently touching my hand with his paw (it sounds cute, but it’s annoying because it interferes with my clicking around the internet, WHICH I SUSPECT IS HIS INTENTION), 15% flopping his leg across my mouse pad, and 10% staring judgmentally at me. He leads a full and satisfying life, is what I’m saying.