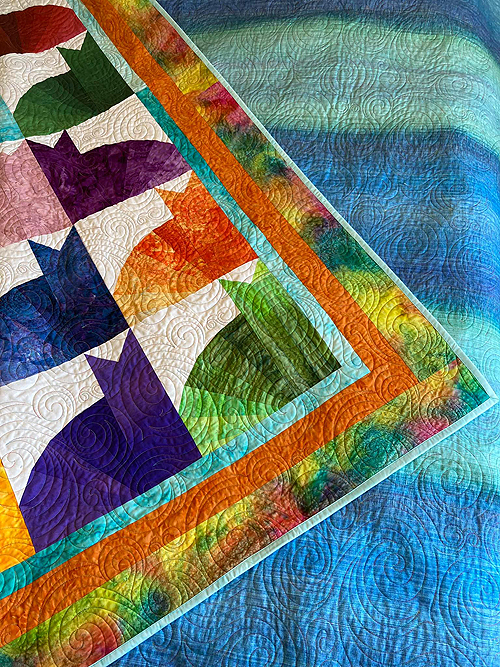 Isn’t it stunning? It measures 77” x 88” and was made by local Forgotten Felines supporter Mary.

It costs $5 per entry into the raffle (and you can enter as many times as you’d like!) You DO NOT have to be local to enter – if you’re not here in the Huntsville, Alabama area, we will ship the throw.

Check out the auction page or just send $5 per entry to forgottenfelineshsv (at) yahoo.com via the “sending to friends” option (to avoid fees) and note “QUILT.” You can enter RIGHT NOW through Saturday at 7 PM (Central Time.) Saturday evening (7:15ish) we’ll draw a winner live here at Love & Hisses Central.

I am home from my vacation, as you can tell. A week away hanging out with my sister is exactly what I needed! And remember how Fred was so relieved that Ivy wasn’t pregnant because he was worried about having to be in charge when she gave birth? Well, while I was gone she went into heat and she remains there. He was very not thrilled about this turn of events, but still says he’d rather deal with a cat in heat than a cat in labor.

Thankfully she’s going for her spay TODAY, so the long nights of listening to her howwwwling are at an end. 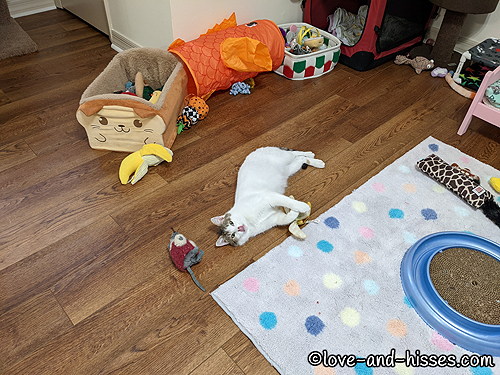 A girl and her catnip banana. 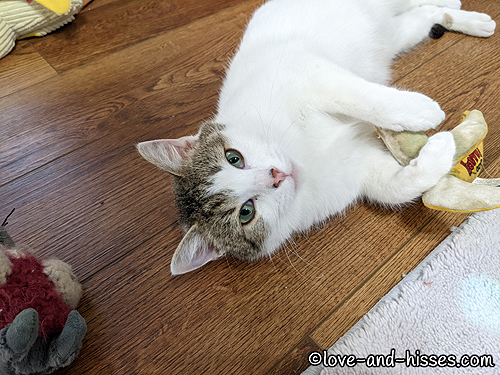 A little bit high, a whole lot NOT SORRY for keeping me awake these past few nights. 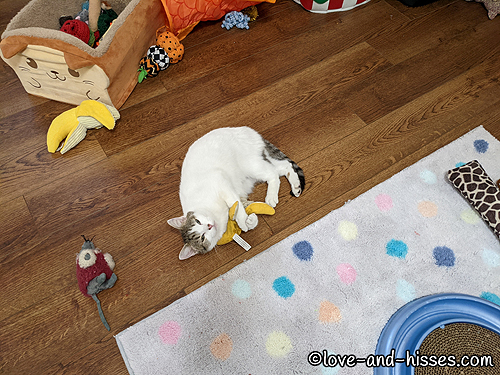 When you have an unspayed cat, you’re always taking the chance that they’re going to go into heat. This isn’t the first cat we’ve had who went into heat, and I’m pretty sure she won’t be the last. On the rare occasion I’m able to get a mother cat spayed before she goes into heat, I always feel like I’ve won the lottery. (And I would happily have had her spayed sooner, but this is the earliest appointment I could get for her – the vet’s still playing post-holiday catchup, I think.) 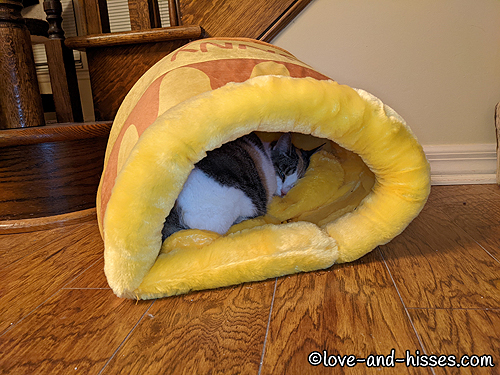 We received this Honey Pot cave last month, and when we first got it Archie tried it out a few times. And then Alice gave it a try and decided it was hers. 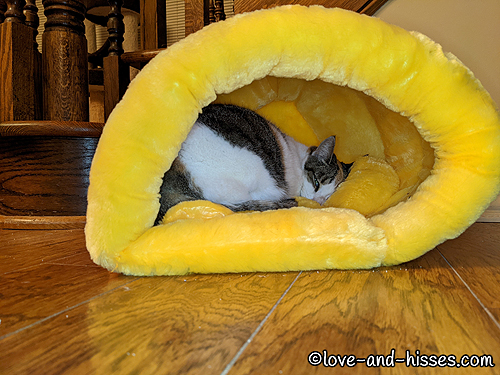 I love seeing her curled up in there, all cozy and warm. 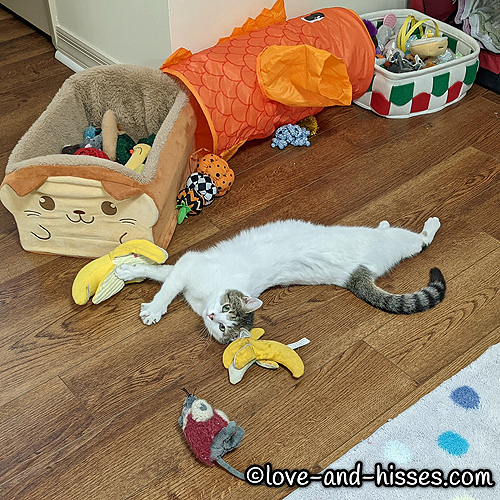 Ivy, I’m home! Did you miss me?
“Didn’t even realize you were gone, lady.”

YouTube link
Whoever it was that predicted Ivy would go into heat while I was out of town, please take your victory lap. She did, indeed, go into heat and she is, indeed, STILL in heat. She’s scheduled for her spay surgery on Monday, and it can’t come soon enough for me! 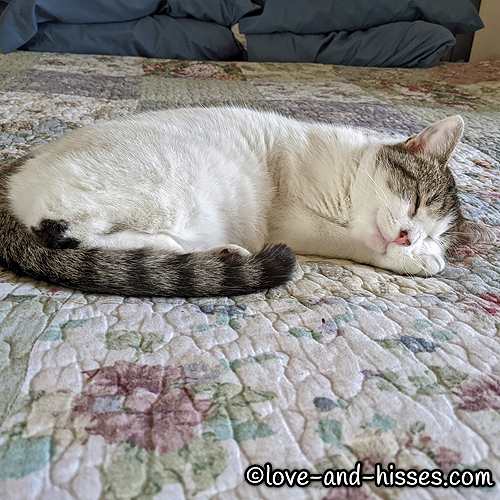 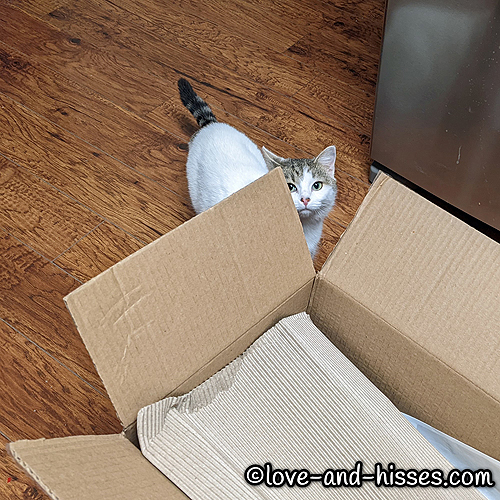 When she’s not howling down the house (Ivy is in heat, if you missed that), Ivy is keeping an eye on whatever I’m doing.

To answer the questions: Yes, the vet will spay a cat who is in heat. Someone once (I think it was when Canasta was in heat) tried to tell me that vets won’t spay a cat until she’s been out of heat for two months. Well, maybe some vets, but given that a cat will go into heat about every 2-3 weeks, I’m not sure how that would be accomplished. Luckily the vet we use has no such restrictions.

The permanent residents find Ivy’s behavior annoying and baffling. When she gets particularly loud, they’ll come see what’s going on (I suspect they think there’s food involved), look at her, and then walk away. Most of them have been through this before and are uninterested (they are, of course, all neutered.)

I have a white noise machine, and Ivy goes into the foster room at night, but since her room is right down a very short hallway from mine, when she does the very deep back-of-the-throat howls, I can hear her clearly. It’s going to be a long weekend, and we’re looking forward to Monday! 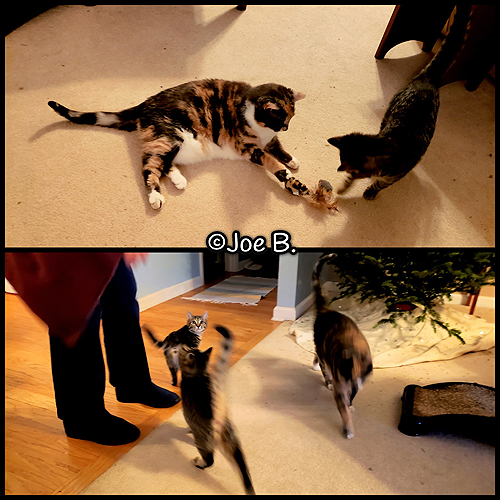 Former foster update! You remember Sylvie (formerly Nikki Nickel) and Minou/Minnie (formerly Ruthy Ruthenium) from just a few weeks ago. Joe says: “Butt [Buttonhead] is more than tolerant now. I wouldn’t call them friends yet but they are getting closer. the swats aren’t angry anymore and the kittens aren’t afraid either. They are respectful though. I’ve heard only one half hearted hiss this week. They love their mommy. (She just got home.) They have gelled into a pride and Sylvie (little one) played with Butt’s tail and Butt played with Sylvie. They slap fought playfully. Big changes this week. What we were hoping for.” (Thanks, Joe!) 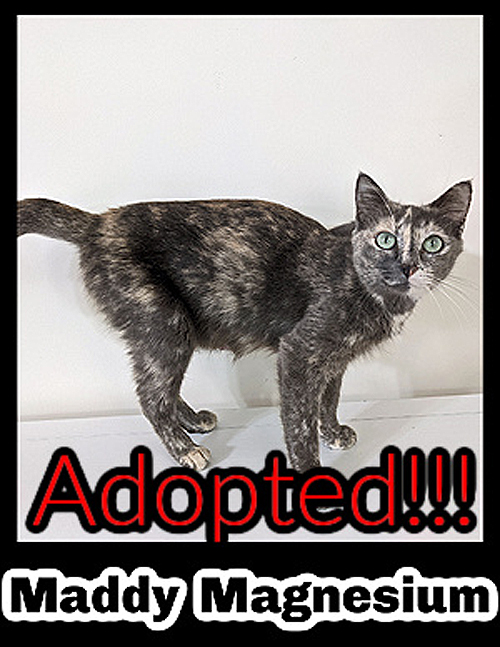 Hooray, hooray, Maddy Magnesium – mama to the Elements kittens, who decided after she’d been with us for a couple of weeks that she was done with that whole “mothering” thing and so went to Michelle’s house – was adopted and went home today! She and FF kitty Walter were adopted together, and are already making themselves at home. Happy life, sweet girl! 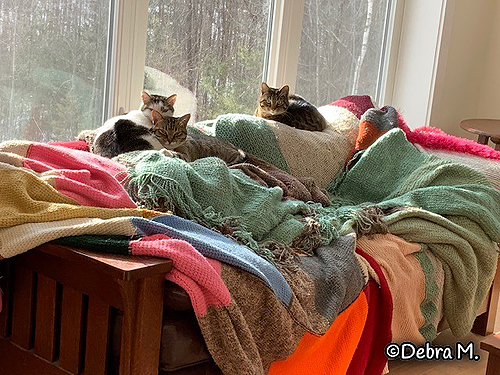 Former fosters! “Cold but sunny outside, Phoenix, Stardust and Amber enjoy the sun…they sure love each other!” (Thanks, Debra!) 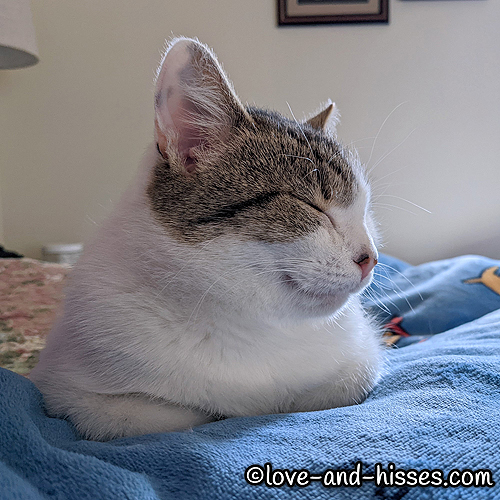 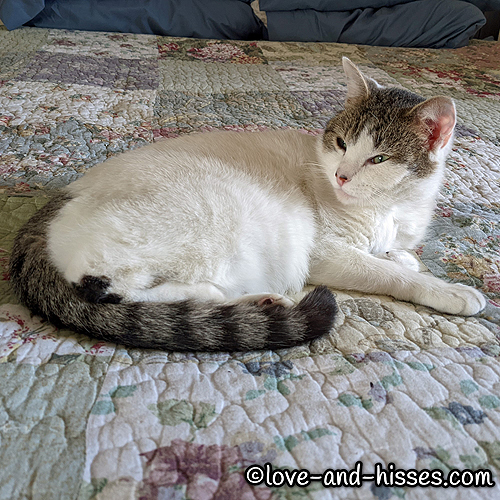 Staying up all night howwwwling really tires a girl out, and Ivy’s going to make up for her lack of sleep by taking a nap.

YouTube link
Ivy (who is still in heat – she goes for her spay surgery tomorrow, yay!) doesn’t spend ALL her time howling at the top of her lungs. Sometimes she changes up tactics and rolls around looking adorable, and hopes that’ll charm her Mister Right into coming along. (Hasn’t worked yet; don’t tell her, but I don’t think it’s going to.)

YouTube link
Still in heat, still searching for a mancat who can help her out (poor Ivy – every male on this property is neutered and wants none of her nonsense. Talk about lookin’ for love in all the wrong places.) (Please ignore how badly that floor needs to be vacuumed.) 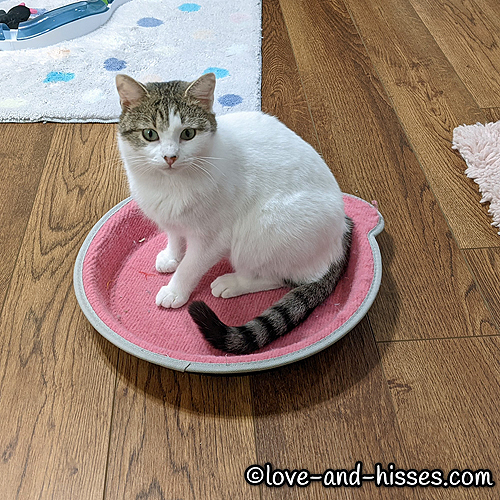 It’s an Ivy pie! All together, now: “My favorite!” 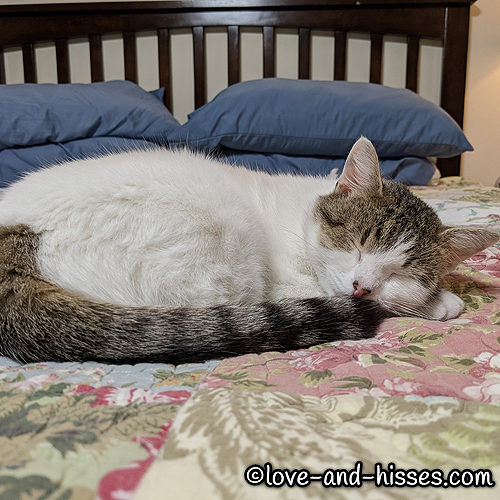 Good night innernets. (Ivy, who will be up around midnight to be begin her all-night singalong. Tomorrow she goes for her spay, hooray hooray!)