Just in case you aren’t following Love & Hisses on Facebook AND you haven’t noticed the sidebar, this happened last night: 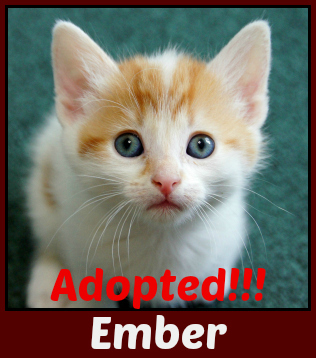 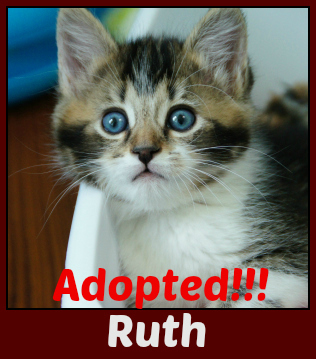 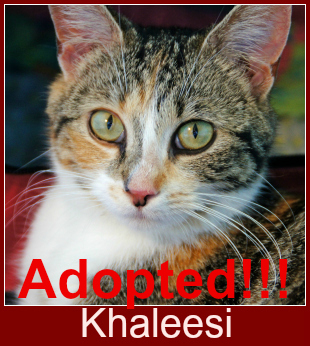 Ruth and Ember were adopted together (I LOVE IT when that happens!), and Khaleesi went home with someone who had another cat at home. Now THAT is a good adoption night! 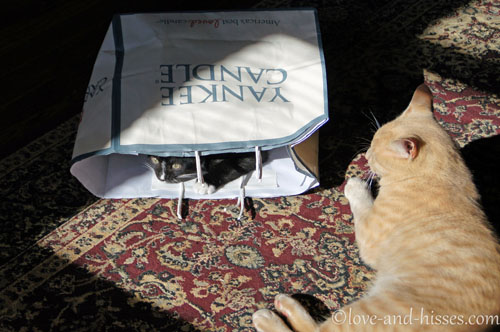 I love how it looks like Norbert (in the bag) totally doesn’t realize Stefan is RIGHT THERE. 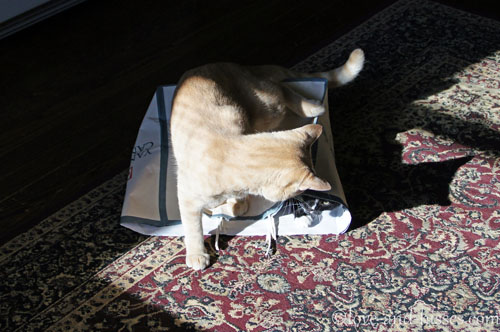 I bet he knows Stefan is there now! 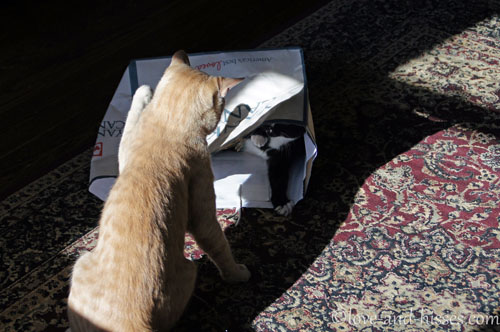 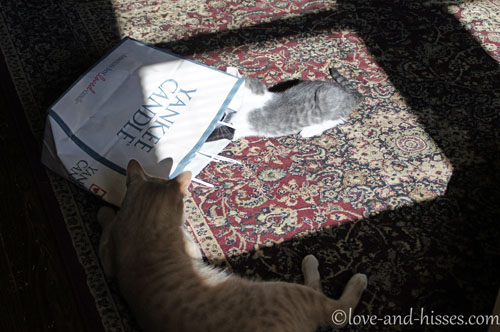 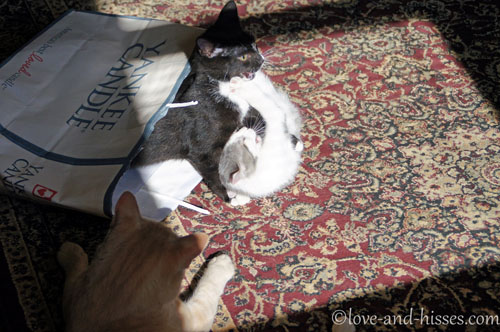 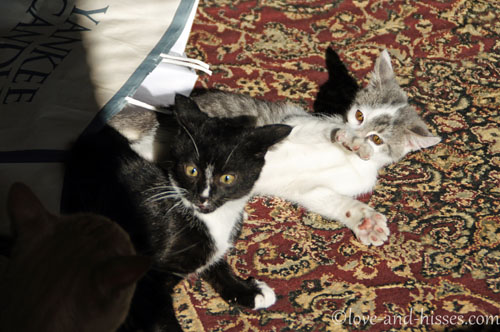 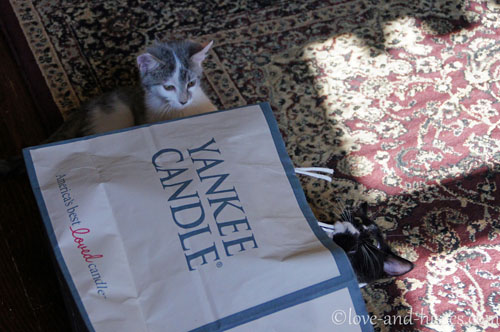 I cut the loops on the bag so no one would get the bag hung around their neck and race through the house with the bag following behind (not that that’s ever happened around here, of course!), and the kittens love to bite the ends that are sticking up from the bag. As illustrated by Norbie! 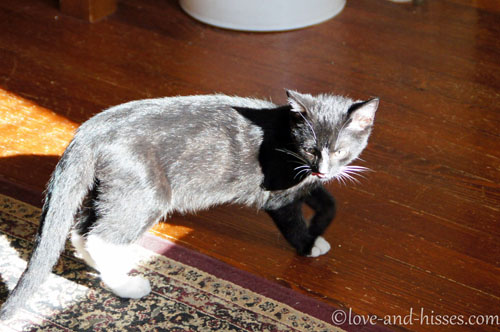 Norbie decided it was time to vacate the bag. I love how you can see his faint tabby swirls on his side. 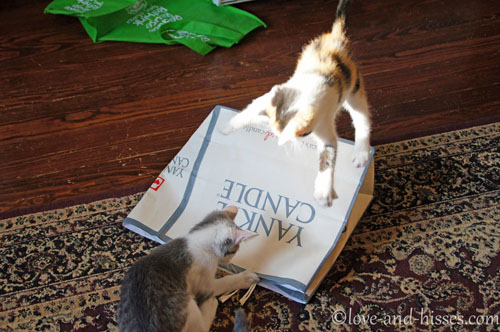 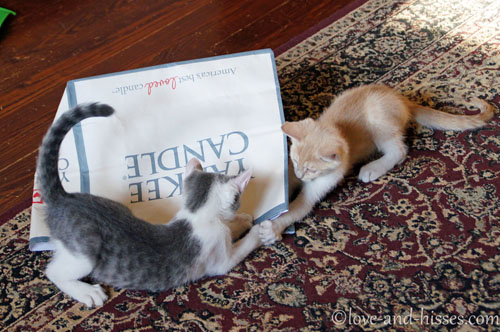 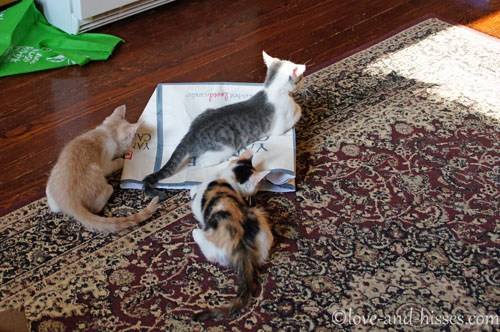 Brandon wants to make sure everyone knows that he’s claimed the bag. “MINE.” 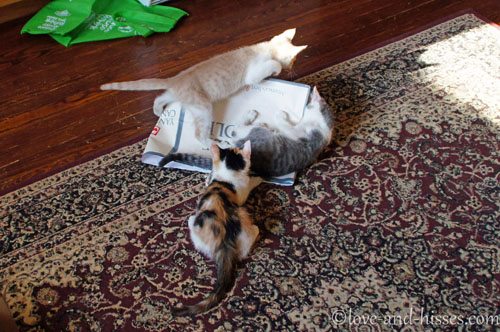 “Hodor!” says Hodor excitedly, spotting his shadow on the floor. 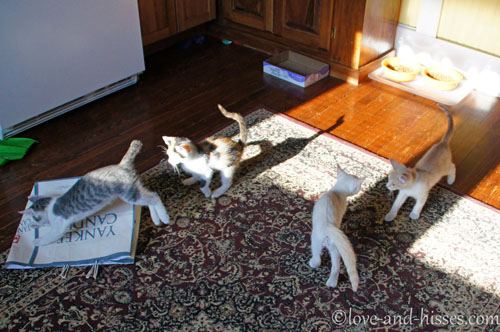 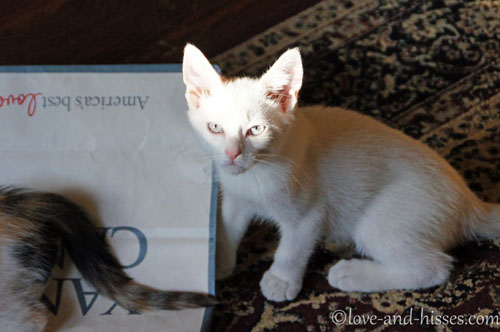 Jon Snow, giving me the stinkeye.

Arya had a quick trip to the vet yesterday. Ever since her spay surgery, she’s had a bit of a cough. It seemed to be getting better as time passed by, but never went away, so I decided she should be seen, just in case. The verdict was that she’s in great shape, and the cough is probably caused by some lingering irritation from the intubation during her surgery. A short course of steroids will hopefully fix her right up.

She was a complete doll throughout the whole experience. I put her carrier in the back of the car (I have a hatchback) and put a towel over the top, and I didn’t hear a peep from her on the half-hour drive to the vet. When we were waiting to be seen, she meowed sweetly at me as if to say “Excuse me, you didn’t perhaps realize that I’m still in this carrier and I’d like you to hold me?” Once we were in the exam room, she sat in my arms and purred up a storm. The vet techs actually remembered her from her spay surgery, because she’s such a lovebug.

She purred the entire time we were there, even when they were taking her temperature. She is such a sweet girl! 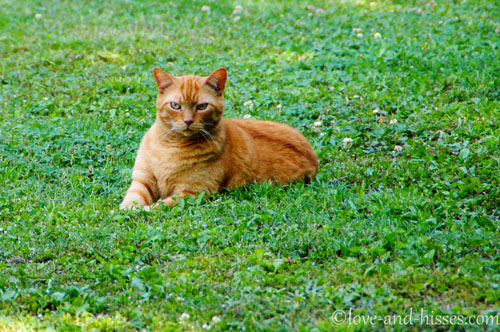 Oh Suggie, I lubs ya.