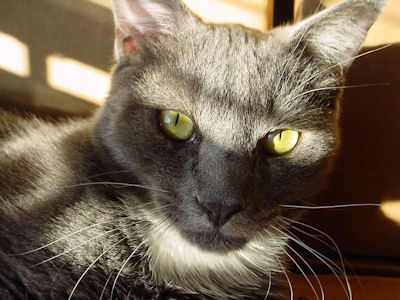 Yesterday afternoon as I was eating lunch, I thought that it was odd that I hadn’t seen Mister Boogers all day. With as many cats as we have, that happens from time to time – Mister Boogers usually spends his mornings wandering around the back yard and his afternoons in a cat bed on my desk. Sometimes he prefers to sleep on the bed in the guest bedroom, or even occasionally disappears upstairs and hang out in the foster kitten room.

I made a mental note to look for him, and then immediately forgot about it.

An hour later, I was bringing in laundry from the clothes line, and I glanced to my right, toward the side yard that leads to the street. A bit of white caught my eye. I looked closer and saw a lump that was obviously Mister Boogers laying under the big tree in the side yard. It was definitely him – his color, his white feet, his red collar. He looked like he was laying half on his side, snoozing comfortably in the shade of the tree.

We have an electric fence around our back yard and the cats who are prone to jump the fence – Mister Boogers, Tommy, Sugarbutt, Joe Bob, and Kara – wear collars that will beep a warning when they get too close to the fence. If they keep going, they’ll get a short zap. This is enough to deter them 99% of the time, but occasionally (rarely) even with the warning beep and the zap, Mister Boogers would withstand the zap enough to get over the fence. Every time he did it, we tried yet another tactic to block him from getting over the fence. Usually the tactics worked – but he was a smart one, our Mister Boogers.

I put my laundry down and walked to the nearest gate, promising myself that Mister Boogers was in TROUBLE when I got my hands on him. I went through the gate and walked toward Mister Boogers, and it was when I was about twenty feet from him that I saw a small swarm of flies around him. I walked a little closer and looked at him.

He wasn’t moving. Wasn’t breathing. I was pretty sure he was dead.

I turned and walked back to the back yard and into the house, intent on getting to a phone and calling Fred.

“Hmm,” I thought. “I’m really handling this pretty well!” I dialed Fred’s work number and went to the side window at the front of the house and looked out at Mister Boogers.

When Fred answered the phone, I burst into tears. I managed to ask him to come home, told him I thought Mister Boogers was dead, and he said he’d be home soon.

I spent the next half hour, walking from window to window, looking out at Mister Boogers, hoping to see him move, twitch, breathe, but there was nothing.

(I couldn’t bring myself to go out and get right up to him. I was too afraid that he’d been attacked by something and would be all chewed up. I couldn’t stand the thought of seeing him like that.)

An eternity later, Fred got home. He went over and looked at Mister Boogers, picked him up while I watched through the window.

Fred examined him closely, and determined that something big had gotten hold of him. He had a hole in his side, and the fur surrounding the hole had very clearly been wet and then dried – you know that look fur gets when that happens. He’d been dead for hours, without a doubt.

We have stray dogs that wander through our property from time to time to get to the food bowl on the front porch. We’re theorizing that one came through, got hold of Mister Boogers, and killed him. I don’t know how long he was there under the tree, dead, before I saw him. If I hadn’t seen that bit of his white paws, I might never have noticed him.

I hope that he died quickly. I hope he didn’t lay there and die slowly, in great pain, while I wandered through the house not so far from him.

Last night we buried him next to the boxwood, the one covered in honeysuckle, a few feet from his old buddy Spot. 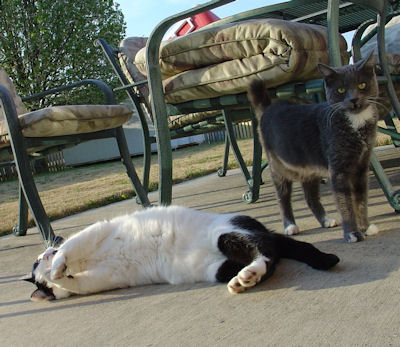 On October 10, 2003, we adopted Mister Boogers. His name wasn’t Mister Boogers then, though – in fact, the shelter had named him “Paw Paw” and it just so happened that I’d seen the picture on his Petfinder page and thought it was so funny that I showed it to Fred. A few weeks later Fred decided it was time to bring another cat into the house, and we went to the shelter. We met lots of cats, but didn’t fall in love with any of them. Fred remembered seeing the picture, which led him to ask if “Paw Paw” was still at the shelter. He was, but he was in quarantine due to an upper respiratory infection. We got to see him, and when Fred picked him up, he started purring, and because he had an upper respiratory infection, his cheeks puffed out as he purred. We knew immediately that he was going to be ours. 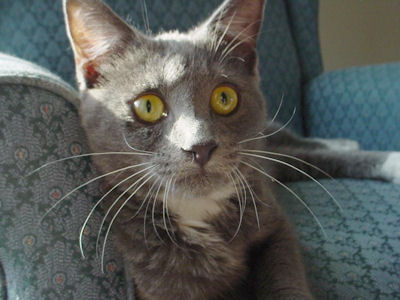 We had a really hard time coming up with a name – Fred wouldn’t agree to “Stumpy” or “Stubby” (which I suggested due to the fact that Mister Boogers was lacking in the tail department – I’d say he had about a third of your average tail; I could never imagine what he’d look like with a full tail) because he said it would be making fun of his “handicap.” We tossed names around for a long time before settling on Stanley.

(I cannot believe we ever thought his name should be “Stanley.” SO not his name.) 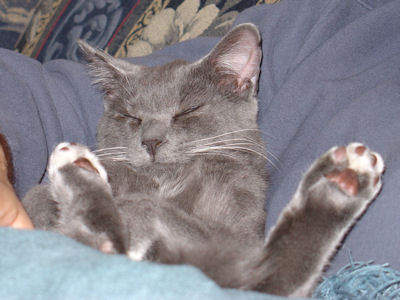 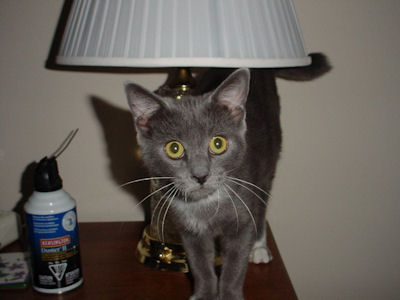 He settled in and made friends quickly – he and Tubby got along very well and were fast friends. His face settled into that baleful glare which always made us laugh, and which led to the whole “Mister Boogers hets you” thing; he always looked like he was sitting around thinking about just how much he hated everything. 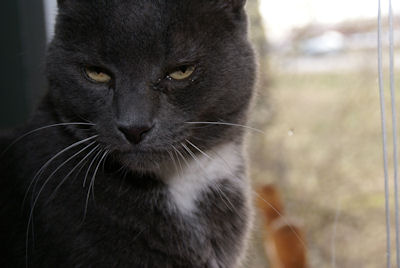 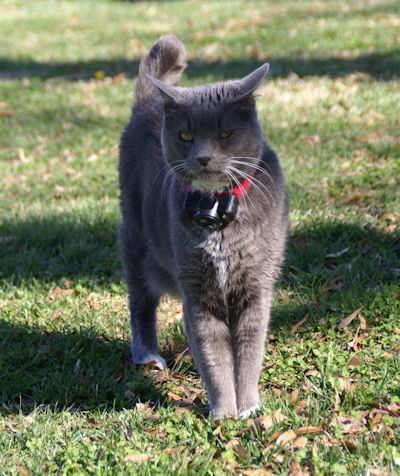 But here’s the secret – though he always had that malevolent glare on his face, though he always looked like he’d cut you as soon as look at you, Mister Boogers was, at heart, a sweet guy. Always up for a petting, always up for a kiss behind the ear. All you had to do to get him to purr was greet him with “Hey, Boogie.” He’d start purring immediately – sometimes he’d answer your greeting with a grumpy sound (a sound we called a “grump.”). 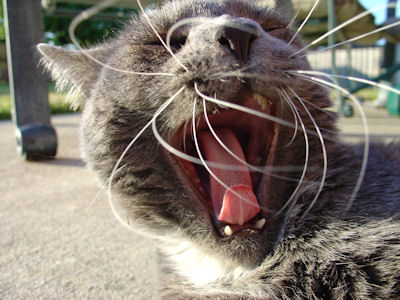 He always had a soft spot for Tommy and Sugarbutt, from the time they were tiny. They would snuggle up to him, and he’d look grumpy, and then he’d purr and clean the tops of their heads. He was like the grumpy old man with a heart of gold. 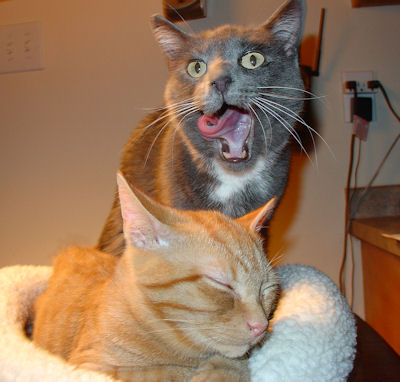 Last night, I was laying in bed trying to remember if he’s been a character his entire life, or if he developed into one. I’m pretty sure he was a character from the very beginning. He had what we called a “war cry” when he wanted to fight, and he’d sit there and cry his war cry over and over again. The war cry usually last longer than the fights did.

Here he is, a few months ago, crying his war cry at Joe Bob, who had the utter nerve to be in occupancy of a box Mister Boogers thought should be his own.

He loved to be outside – OH, how he loved to be outside. Every morning he’d wait impatiently to be collared up so he could go outside, sniff around the perimeter of his territory, and then flop down on the cement pad in the back yard. He’d go outside from time to time during the day, I guess just to make sure things were as they should be, check on Tommy and Kara, and then come back inside to sleep off all that hard work. 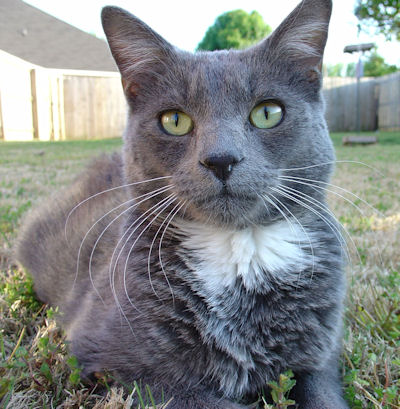 At night, he’d get up on the couch next to Fred, and grump at him ’til Fred moved over to make room for him. Our Boogie was not terribly demanding, but when he wanted something, he wanted it NOW. At dinner time, he’d sit by Fred and howl for food. Fred would give him a little piece, he’d sniff it, turn his nose up at it, and stomp off. It was never what he thought it was going to be, I guess. 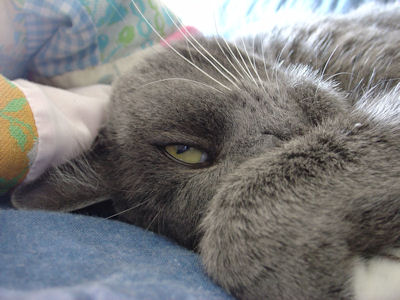 At bedtime, he’d come upstairs with us, and often he’d dig at the sheets until Fred held them up. He liked to get under the sheets with us, flop down on his side, and press his cold, cold feet again our bare skin. That cat had the coldest feet I’ve ever felt on a cat. The best part would be when one of the other cats, not realizing Mister Boogers was under the covers, would tromp across him. He’d lay there and let out this part-whine, part-growl, part-complaint that sounded exactly like this:

Sometimes he’d smack at them through the covers. 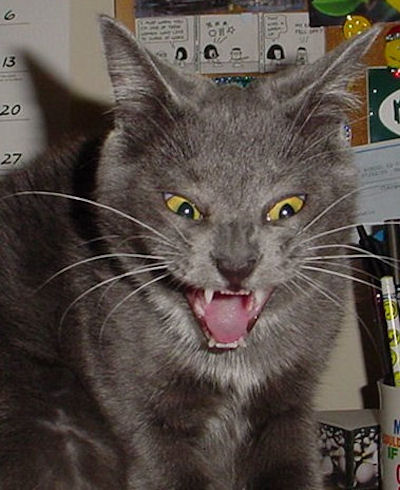 Sometimes he’d make his part-whine, part-growl, part-complaint noise at me if I moved my leg or displeased him in some other way, and I’d always kick him off the bed when he did that. He learned quickly that Momma didn’t put up with that behavior, but sometimes he just couldn’t seem to help himself.

He had the heaviest walk of any cat I’ve ever had. You could hear him walking down the stairs – sometimes he’d walk so heavy I’d think a person was coming down the stairs or across the dining room. I guess all that personality weighed him down.

He was SO patient with us. He’d let us carry him around like a baby, he’d let me put hats on him. He’d grump and glare at me, but the entire time he’d be purring and waggling his stump. 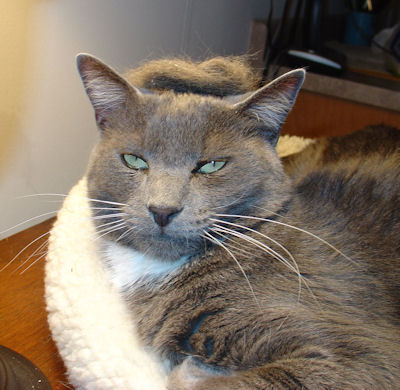 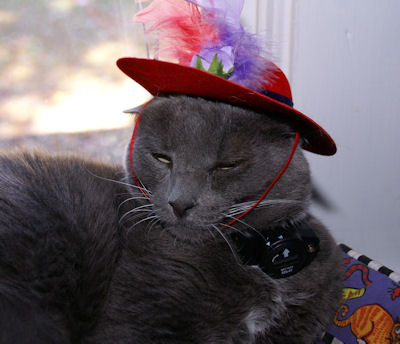 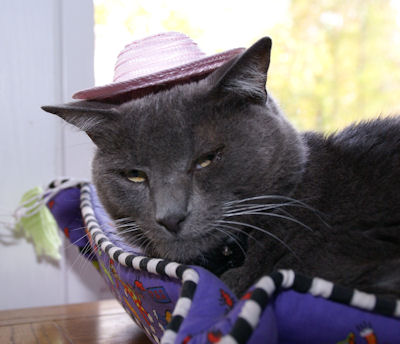 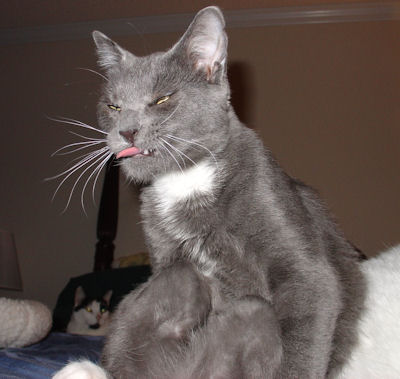 He was such a character – you’d think that in a house with ten cats, an absence of one wouldn’t be so noticeable. It is, though; the absence is huge. I keep expecting him to walk into the room, announce his presence with a grump, and waggle his stumpy tail. I keep remembering that he’s gone, and there’s a sense of disbelief every time. He was larger than life, our Mister Boogers. 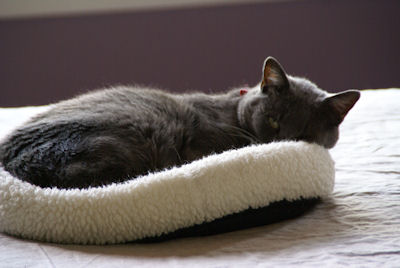 Bye, Boogie. I miss you.

If you’re of a mind to, donations can be made in Mister Boogers’ name to Challenger’s House, the shelter I volunteer and foster for. We got Mister Boogers from Challenger’s House in 2003, and all of our cats since then (except Maxi and Newt, who came with the house) have come from there. It’s a no-kill cat shelter, and they do good work.

They accept donations by mail (check or money order), by phone (Mastercard/VISA), or select the button below to donate through PayPal.

Previously
2008: Poor little monsters, they have no idea what’s coming!
2007: No entry.
2006: No entry.
2005: For the most part Mister Boogers left the kittens alone, though Oy kept going over and sniffing at him, and he could hardly stand it, and he would growl and raise his paw to smack that kitten across the room, but then I would say “Mis. Ter. Boog. Ers.” in my Mean Lady voice, and he’d put his paw back down and walk away.