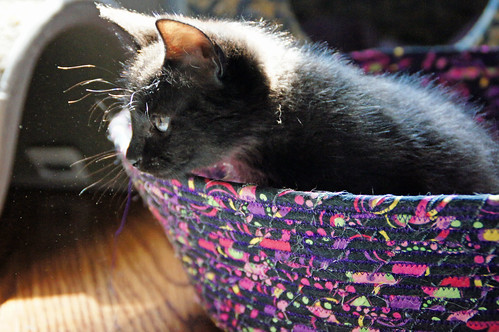 You know, I don’t EVEN know where all that dust in the air in front of Logie came from. Maybe someone just sneezed or kicked up dust in the litter box. I sure didn’t notice it when I was taking the picture. Ignore the dust, appreciate the pretty kitten. 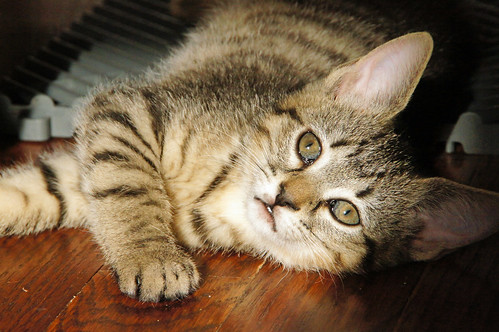 Darwin, rolling around in the sun. 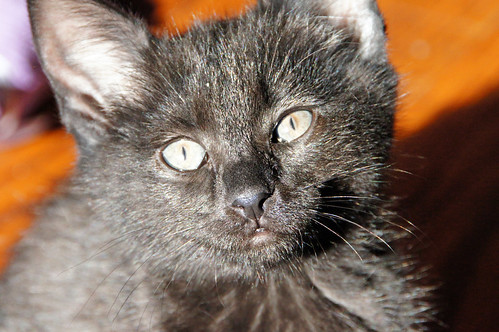 Someone mentioned yesterday (I think) that Logie’s eyes appear to be changing. You can’t really tell in this picture, but they’re not blue anymore, they’re green. I’ll try to get a picture that shows her eye color better. I think all these kittens are going to have green eyes like their mama. 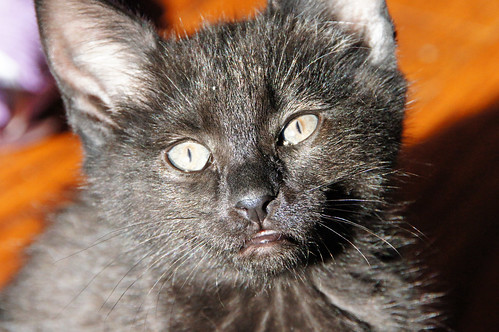 I love that you can see her bottom teeth. I’m sure she was opening her mouth to complain that I was taking her picture instead of petting her. 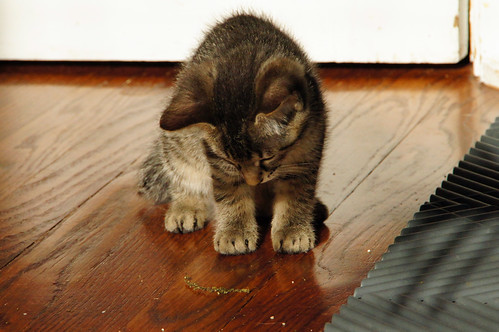 A catkin was dragged into the house and got into the guest bedroom. Newbery was a man obsessed. 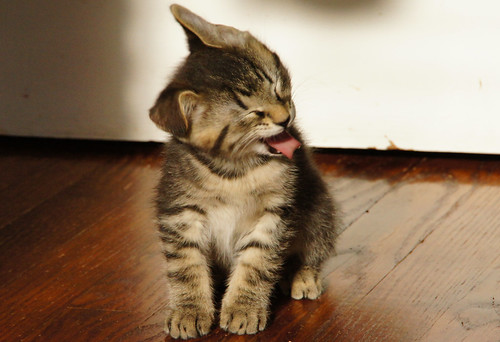 Then he tried to eat it, and it was apparently not very tasty. 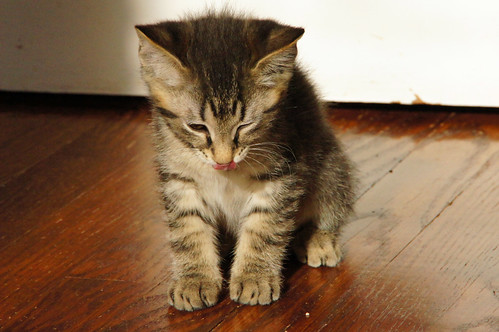 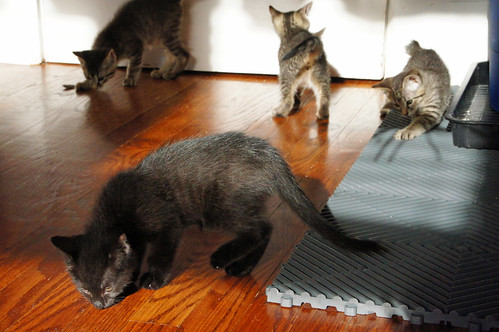 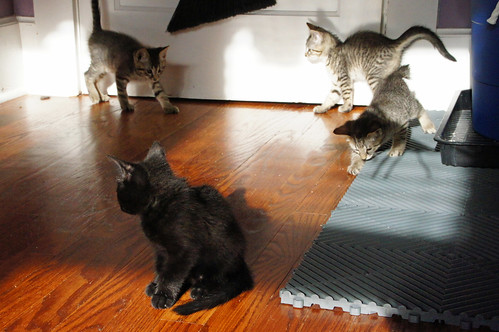 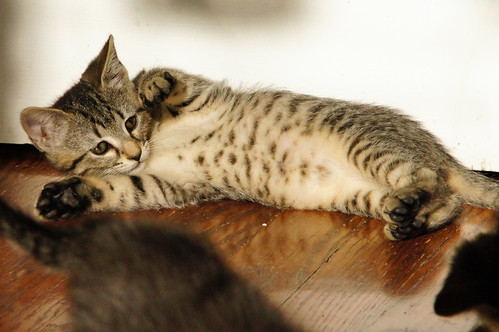 “You must rub da belleh.” 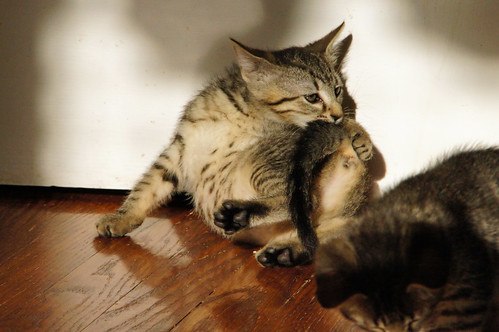 I got some video when Newbery was trying to decide if the catkin was friend or foe, as well as some playful footage:

Emmy was spayed yesterday. I dropped her off in the morning (she went to the North Alabama Spay/ Neuter clinic). Fred actually had to go into work late because I just knew she wasn’t going to let ME put her in the carrier. She was NOT happy about being put in the carrier, but once he had her by the nape of the neck he was able to contain her long enough to get her in there. She howled until I got the carrier in my car and covered it with a towel, and then she didn’t make a single peep the entire way there.

The vet wasn’t able to get blood from her for a FeLV/ FIV test (she was tested before we got her, but several cats tested FeLV positive, so it was best to have her retested just to be safe.), so they had to wait until she was under anesthesia to be tested. I was worried all day until I got the word that the tests had come back negative. PHEW.

I’ll be leaving here in a bit to go pick her up. I expect she will NOT be a happy girl, but thank god that that’s done and over with. Especially considering that she went into heat starting Sunday. I am not kidding you when I tell you that that girl has got some LUNGS on her, and Monday night into Tuesday morning she was going off all night long.

“She’s probably just lonely,” Fred said. Yeah. I’m sure she WAS. I was reminded of when Kara went into heat and she decided that Spanky was her man, and she followed him around and howled at him and did the low march in front of him and he just looked at her, all appalled, like “I do not know what you want. Please leave me alone.”

Joe Bob will turn 7 at the end of June.

In early 2007, we had two foster cats, adults named MoonMan and MoonDance. They were with us for a break from the cage at Petsmart, where they’d been for a while. They were with us for, oh, about six weeks. They were very sweet, but MoonDance was a bit intense, and if she was irritated, she had a very loud, very scary scream. It was even worse because there was no warning at all, no hissing or growling, just a high-volume scream. They were set to go back to Petsmart, but then Joe Bob developed a URI and had to stay with us for a few more weeks.

While they were with us, they picked up the nicknames Joe Bob (for MoonMan) and Myrtle (for MoonDance). MoonDance/ Myrtle was adopted pretty quickly (she was a very sweet cat, but like I said – intense) and eventually Joe Bob went back to Petsmart once he was over his URI. He was adopted out and then returned some time later. He sat at Petsmart for a while longer, and then went back to the shelter. We’d occasionally talk about him because he was really a super-sweet cat and he’d been good friends with Sugarbutt and Tommy and Mister Boogers. At the end of January 2008, we said goodbye to Spot. We began talking about eventually adopting another cat. I was up for waiting a while, but Fred wanted to do it immediately. We talked about fosters we could keep, and we couldn’t decide what we should do, when Fred remembered MoonMan/ Joe Bob. I was okay with the idea of adopting Joe Bob, but wanted to wait a few weeks for things to settle down. Fred, however, refuses to wait one minute once he’s made up his mind, and went to the shelter to get him.

Joe Bob is just the sweetest boy. He’s a great big love and will sit and give you the Love Eyes all day long. Unfortunately, despite his previous best-buddies relationship with Mister Boogers and with Tommy and Sugarbutt, he never really clicked with them again. There are times when he and the other cats will be relaxed around each other, but then other times when they hiss and growl at each other. Joe Bob and Maxi do not like each other at ALL, and sometimes Newt and Joe Bob will growl at each other, and other times they just ignore each other. I don’t think it’s only the fault of the other cats – Joe Bob doesn’t like it when the other cats get too close to him, so he growls at them, which causes them to growl at him and then I have to yell “WHY CAN’T YOU ALL JUST GET ALONG” and then they look guilty and oh, it drives me nuts. He is just such a people lover, though. I mean, I guess he’s a Fred-and-Robyn people lover, which my neighbor discovered when she asked if she could pet him, and Joe Bob saw Fred coming over to pick him up, figured out what was about to happen, and vamoosed in an instant. He’s never hissed or growled at us, never bitten or scratched; I think we could do just about anything to his sweet self, and he’d let us do it, probably purring the entire time.

Also, he’s a talker and if you walk outside and he sees you, he walks over, talking the entire way. Unlike Kara (who says “WHAT are you doing outside, you are NOT supposed to be out here, GET back inside, SCOOT, but rub my belly first!”), Joe Bob is happy to see us and says “HI, I’m so glad to SEE you, come here and give me a KISS, and then a belly rub, please!”