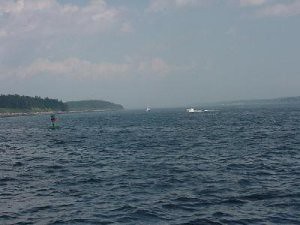 When I am very old, maybe forty-five years old, I will own a cottage on the coast of Maine. It will be a small cottage, maybe two or three small bedrooms, and on a large piece of land, miles from anyone else. I will decorate it the way I like, with pieces of driftwood and seashells scattered on the kitchen windowsill, and small plants in pots there too, to grow root bound in the sun, happy with their view of the ocean. I will hang long sheer white curtains in the windows, and they will twist and blow in the ocean breeze when I open the windows. I will always keep the windows wide open, even when it’s storming. There will be a simple path from the front door of my cottage to the water’s edge, because what use is it to have a cottage on the ocean when you have to struggle down a rocky, slippery slope to touch the water and play on the shell-scattered shore?

In my bedroom, I will have a queen-size bed, and a battered bed-side table, where I will pile my books and candles and whatever holds my interest at the moment. On the bed, I will put clean, crisp blue sheets, and blankets, and a comforter of light blue with fluffy white clouds. When Fred isn’t busy saving the world from itself, he will come live with me in our cottage on the ocean. He will complain about the silly comforter in our bedroom, and I will laugh at him and tell him to watch it or I’ll toss him in the ocean. He’ll pretend to pout, and I’ll push him down on the comforter with the silly white clouds and make him forget how silly they are.

We’ll go to sleep at night with the smell of the ocean blowing across our bodies, snug and warm under the sheets and blankets and blue comforter with clouds, our bodies intertwined so closely that it will be impossible to tell where I end and he begins. We’ll wake with the smell of the ocean on us, as the sun comes up, and we’ll race to the ocean and dive in, gasping at it’s frigidity. We’ll laugh at ourselves for once believing that the ocean off the coast of Florida, with it’s bath-water temperature and clear light-green color could ever compare to the untamed deep-blue wildness of the ocean off the coast of Maine.

After our swim, we’ll eat breakfast on the wraparound porch, watching boats sail by, and lobster men setting their traps. Sometimes we’ll go back to bed to spend the morning sleeping and making love, and other times we’ll spend the better part of the day walking along the water and picking up shells and driftwood, or clamming. I will have flowerbeds circling my cottage, and crushed clamshells will line them. The flowers there will grow wild and beautiful, and Fred will tease me, calling them weeds. But I won’t care, because weeds or not, they will be beautiful to me. 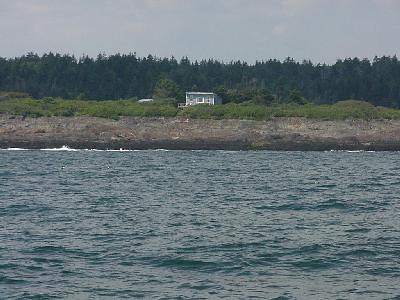 When Fred has to travel to save the world from itself – or rather, to show the world how to save itself from itself – I will soak a small towel in water from the ocean and let it dry in the sun all day. When he’s packing, I’ll slip the towel between his clothes, and he’ll come upon it in some far-off place and hold it to his face and smell the ocean scent and feel homesick for the cottage on the ocean.

I will have a small boat, a tiny little putt-putt boat, nothing fancy, nothing I’ll be able to sleep on or take on long trips, just a small boat to take me out on the water when I am feeling out of sorts and need the soothing, rocking motions of the sea. Sometimes I will take the boat far from shore and anchor to a buoy and just lay back and feel the boat move gently to and fro. I will doze in the sun and awaken slightly sunburned and hot, and I will dive into the ocean for a short swim. Then I will think about stealing a lobster from one of the lobster traps attached to the buoy, and then feel bad for even thinking of stealing from the hard-working lobster men. I will putt-putt back to shore and tie up the boat, and walk up the path to my front door, to be met by Miz Poo, who will be very old but healthy, and Mr. Fancypants, who will also be very old, and they both will have taken to living by the ocean with unexpected vigor. I will let them out to explore their territory, believing they will always return safely to me. 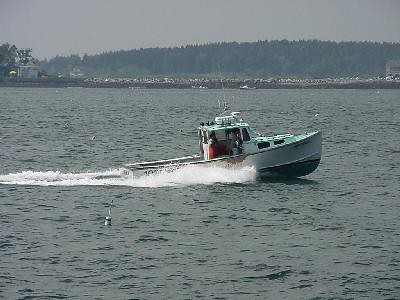 I will make friends with a crusty old lobsterman named Shane. Shane is not his real name, his real name is Bob or Bill, but I will always call him Shane. Shane will tell me his story in bits and pieces over several years. Shane grew up on the coast of Maine and worked all his childhood on his father’s lobster boat until he was old enough to be made a partner in his father’s business. He married the girl he fell in love with in second grade, and they made their home in a small fishing village on the coast far north of where he will live when I meet him. Shane never loved, and will never love, anyone but Anna, and for a long time, several years, his life was all he’d dreamed it would be, because not everyone dreams of a large life, not everyone can save the world. But, as Shane will tell me, the ocean is a jealous lover – and when he tells me this, I will first half-smile at the romance-novel sound of what he says, and then my half-smile will freeze and fade, and tears will form unexpectedly in my eyes, because the truth in that statement will make my heart ache. When Shane and Anna had been married for five years, the jealous ocean took not only Anna’s life, but the life of their unborn child.

Shane fled Maine and the ocean, running far, far inland, not stopping until he reached Montana. There, he changed his name and worked on various ranches for twenty-six years, never in all those years returning to Maine, never listening to the siren call of that ocean which thrummed in his veins. On his fifty-second birthday, he faced the fact that the ocean would never, could never, let him go, and he returned to Maine, settling as far south of the town he’d grown up in as he possibly could. He made his peace with the ocean, knowing that she could kill him as easily as allow him his peaceful life, and respecting – though not fearing – her for that.

Years later, I will meet him. We will slowly become friends, and I will beg, harass, and harangue him to let me go out lobstering with him. I will want to work alongside he and his two crewmen, pulling traps, baiting them, and setting them. He will finally agree, just to shut me up. He has no defense against me, the woman who always, always gets what she wants. Though the muscles in my arms and back will ache by the end of the day, I will grudgingly be told that I didn’t do a bad job "for a girl." Shane will pay me in lobsters.

Because some people only see black and white, people will assume that Shane and I are having an affair. He and I will only laugh at the notion, because the long nights we sit on the wraparound porch at my cottage on the ocean are filled with long silences, he thinking of Anna and I of Fred, away on his business trips. I will never conceive of loving anyone the way I love Fred, and Shane feels the same about Anna. 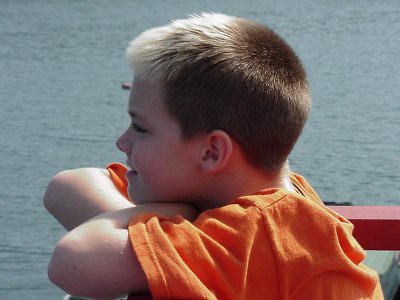 My parents, sister and brothers, nephews and children, and then grandchildren and great-grandchildren will visit me in my cottage on the ocean, and some of them will feel not quite at home there, but I will know simply by looking at others, that as sure as anything, the salt water of that jealous ocean runs in their veins. Some will be content to sit and look at the ocean, while others will have to run down to the water’s edge to taste, touch, and smell the water.

I will die quietly, at a very old age, perhaps in a chair on the porch of my cottage on the coast of Maine. And as my life fades from me, I will hear only the ocean and perhaps feel slightly sad that as much as I have loved the ocean, as much as her salt water runs in my veins, as much as my heart has leapt at the very thought of her, she has never loved me back. 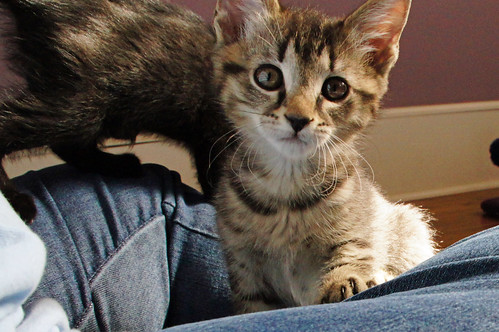 I love it when they look so serious. Like “No, really. You gonna give me a snuggle?” 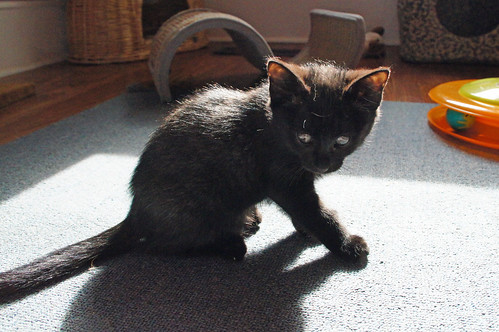 Logie in the sun. As much as I had hoped she’d turn out to be something other than a black cat (not that I have a SINGLE thing against black cats, you know I think they’re awesome! They just tend to take forever to be adopted, which drives me nuts.), I think she’s going to be a black cat. We may need to hire someone to follow her around with a spotlight so everyone can admire her stripes. 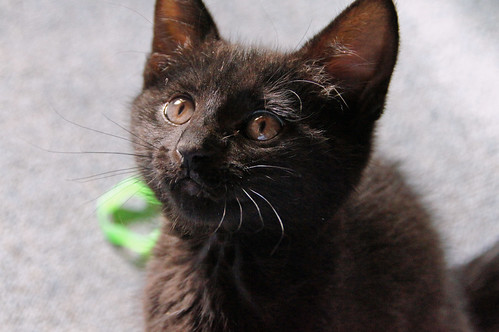