Um…so dumb urbanite question. Do carrots typically grow in the winter? Or is that just a Crooked Acres thing?

I think it’s a Southern thing – the winters here are mild enough that the carrots will grow (slowly) over the winter.

Tell me-in the last pic labeled “Tabby Trio” are they Darwin, Newberry and Razzie going counter-clockwise (like from back to front)? I believe you are correct! Good eye!

Has anyone ever told you that Miz Poo looks a lot like Sue/PitterPats’ Rosie?

I definitely see the resemblance! I just wish Miz Poo was as good with the fosters (and by “as good” I mean “doesn’t hiss and smack them with the Paw o’ Doom”) as Rosie is!

Miz Poo is absolutely gorgeous. I love her coloration. And the picture of her with Beulah in the bed is threatening to give me a blood sugar spike. I am fairly certain that Miz Poo was sound asleep when Beulah wormed her way into that bed with her. If Beulah had tried that while Miz Poo was awake, there would have been hissing and smacking (from Miz Poo), but when she wakes up to find a foster snuggling with her, she’s always a little befuddled and not quite sure what to do.

Have you been able to weigh Emmy? She seems a petite little thing. Is that why she gets so many snacks or just because she’s nursing?

No, we still haven’t weighed her. She is definitely a small girl! She was getting so many snacks both because she’s so small (I hate seeing her hipbones) and because she was nursing. Now that the babies are out of the room, I’ll likely cut her back to a couple of big snacks a day in addition to her regular food.

Hey Robyn, have you heard about Toto the tornado kitten?

He reminded me of Dorothy, who I still love reading about on her own blog.

I had to come back and watch it again. Why is the raccoon at 9:43 throwing kibble at the old limping possum with the messed up tail??? You know my weakness for the old folks. I’m going to be asking to adopt him next!

This question made me laugh out loud. He’s not throwing kibble at the old limping possum with the messed up tail – he’s grabbing a handful of kibble, and then taking it away so he can eat it. Clearly the old possum is not scared of raccoons (if he even realizes they’re there), and the raccoon is a bit leery of the possum. Have you seen possum teeth? They’re sharp!

Have you ever cut some honeysuckle branches for the cats? I get cut pieces from a cat store for my cats. They LOVE it ! They will even pass up catnip over honeysuckle. The last time I was at the cat store they had honeysuckle shavings and I filled up a few toys with it. The cats went crazy.

I hadn’t before I read this comment – but once I read it, I went right out and cut some honeysuckle for the cats. They sniffed at it, but they weren’t very interested. Maybe my cats are defective! I walked into the room and couldn’t find the kittens for the longest time. Finally, I realized that they’d turned this basket over so that it was facing the wall, and all of them were stuffed inside. Or doing her Cher imitation.

After I posted yeterday’s entry, I walked into the guest bedroom to check on the kittens, and all four of them were out running around. Logie came running right over to me, chirping like she was saying “Where ya BEEN?!”, her tail whipping back and forth. The instant I sat down, she climbed into my lap. As the day progressed, each time I went into the room they were friendlier. They’re definitely friendlier than they were when they were in the room with Emmy (not that they were unfriendly, just less interested in me than they are now, I guess.)

Emmy is.. well, she’s regressed a little. She’s apparently exactly the same with Fred as she was before (at least, according to him), but she doesn’t want me to pet her and when I pressed the issue yesterday she nipped at me to let me know she meant business. I guess I’m going to back off and just spend more time in the room with her so she gets used to me again. We’ll see how it goes!

About Maxi and Newt.

(Covering them together, because they “joined” the family at the same time.)

Maxi is – and this is purely guesstimating on the part of the vet – about 8 years old. Maybe a little older, maybe a little younger.
Newt is – guessing here, too – about 6.

We bought this house in September of 2006, and in the weeks before we signed the papers, the owners (who weren’t living here, so the house was empty) were kind enough to let us spend as much time walking around the property as we wanted. During one of those visits to the house, a small black cat showed up in the back yard. She was a little skittish around Fred, but she came right over to me and let me pet her. We could see that she was clearly a nursing mother, and Fred talked to the man who lived next door at the time, who said that he thought she belonged to the neighbor on his other side. As the weeks went by, she showed up more and more often, and finally Fred went over to talk to the neighbor we thought she belonged to, only to find out that she didn’t belong to them. It was clear that no matter what we’d planned, Maxi and Newt were pretty sure they belonged here. I did say for a few months that “They’re not OUR cats!”, but obviously they were. Newt spends as much time inside as the other cats, especially in the winter. Maxi used to come inside, but at some point she decided that there are just TOO MANY cats in this house, so NO THANK YOU. Newt is a very quiet, very sweet boy who doesn’t ask for much aside from a warm place to sleep and food to eat. If he’s inside, he wants to be outside and if he’s outside? Inside, please. I must let him in and out 30 times a day. He loves loves LOVES Maxi, but he’ll put up with the other cats. If Jake wants to rub up against him, Newt’s okay with that. In fact, none of the other cats bother him at all. One thing that I really really like about him is that if he’s outside the door looking in and I open the door, he comes right in. There’s no dithering, no walking part of the way in and then changing his mind, or refusing to come in until I shut the door whereupon he looks sadly through the door at me. If he’s looking like he wants in, he WANTS in, and in he’ll come the instant I open the door. 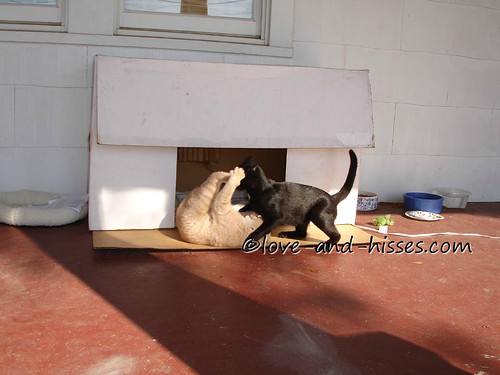 A note on the names: We originally called Maxi “Mama”, but I needed to have a name to give the vet’s office, and “Mama” is just so unimaginative. So I looked at her and thought “She’s so tiny, I should call her Minnie.” (which is ironic because she’s on the stout side these days) and then the name “Maxi” popped into my head, and I liked it. I also needed a name for her buff tabby companion other than “The buff tabby”, and I happened to catch the news at some point. They were talking about Newt Gingrich, and I liked the name. That’s right, that poor cat is named after Newt Gingrich.

We still tend to call Maxi “Mama”, and Newt is Newt or Newtles.