While we await the tiny dragons, I have a problem I’d like advice on: my 13 year old female cat has had 4 UTIs in the past year. Sigh. What can I do about this? She already has allergies and frequent vomiting, for which she receives pepcid and steroids (a few times a month for the ‘roids). She eats exclusively canned food with about 4 treats a day after meds. We bought a fountain that she ignores (old cat loves it); maybe she wants the yicky plastic one instead of ceramic? We have a Feliway plug-in. There’s always fresh water. 2 litter boxes, though only scooped (yuck) 2x week because that’s husband’s job and he’s crappy at it.

What else???? Ugh. She’s a raging beyotch at the vet, so she has to get tranquilized every time.

I don’t have any helpful suggestions here – I feel certain that there are some readers out there who can help (and in case you didn’t see them Rebecca, Connie and GD left responses on the original comment). Please chime in, y’all!

Oh, and I am going in search of that “S-curve”. I am sure I will have no trouble but if anyone has a link handy you could post it up too please.

In case you haven’t already found it, you can find it at Amazon!

I happened to be at Walmart the other day and saw one, so grabbed it for Khaleesi’s room. It was $19.88 at Walmart – and then I saw another one at Target yesterday for $19.98. Both of those are cheaper than Amazon, so if you don’t mind leaving the house, check out either of those stores!

An update from Holly:

Thanks for all the help you gave me and my friend by putting up the picture and info about her disabled cat Honey. She had also contacted some local shelters and others and has now had a lady step up and contact her. This lady has said she will be glad to care for Honey for however long he needs. The details have yet to be worked out but it has been a relief to my friend to know the possibility exists. I thought you and the readers would be happy to know all of that. Thanks again 🙂

Great news! Thanks for the update, Holly!

“The Viruses” or “The Diseases” might be a good family theme for names. They probably haven’t been used.

I can only imagine the look I’d get from the shelter manager if I said “Yeah, I’m going to name him Colon Cancer!”

I was just looking at the sidebar. Is Lilybet still at Petsmart? She had been returned, right?? Any updates on her? She is so beautiful. I can’t believe she has not been adopted 🙁

I happened to see Lilybet yesterday when I had to run to Petsmart to get canned kitten food, and she looked pretty happy. She was stretched out in her cage, taking a bath, and when I went in and gave her petting and kisses, she purred and seemed happy to see me. So yes, she hasn’t been adopted yet, but she’s not suffering. Of course, she SHOULD have been adopted by now, but sometimes it just takes a while, you know?

Can you see Corbie’s belly button when he’s lying like that? My Maia (who is his female clone!) has the brightest white belly button in the middle of all that fur, and she can’t hide it! My black cat Barney also has the same, plus his nips are bald as well! I just wondered if any of your kitties have an obvious belly dot when they lie all gorgeous on their back?

I can’t see Corbie’s belly button, but that’s probably because his belly fur is very very thick. Tommy, on the other hand, practically blinds you with his belly button and nipples when he rolls onto his back!

It sounds like your hack was a different issue, but in case you haven’t heard about it, there’s also been a pretty widespread attack on WordPress blogs going on.

Typical suggestions I’ve seen are to install the Wordfence plugin, which does all kinds of security stuff like limiting login attempts and doing regular scans and warning you if any WP files have been tampered with, and also to make sure the admin username isn’t admin, since this attack is trying to guess the admin password.

A couple of people suggested the Wordfence plugin. I did install it last week, and it has been pretty amazing. It found one line of spam code buried in a file and deleted it (at my okay). And any time someone attempts to log in and fails, the program alerts me. I LOVE it and highly recommend it if you’ve got a WordPress blog!

I want to thank everyone for the advice and encouragement you gave me for my friend Amy and her diabetic kitty, Tommy. He is feeling MUCH better and his blood glucose readings are in the normal range. They have mastered the glucometer and giving the shots is no problem. Amy wanted to thank you all for the support. I bought Tommy a kitty sofa – here is a pic of him with it. He wasn’t quite sure what to make of it at first but he loves it now.

Thanks again – you are the best.

What a cutie! Great to hear that that sweet boy is doing well. 🙂

Saw this and thought of you and how much of an issue it was getting the ducks in the pond.

I love that video!

Would you believe that despite their love for the pond, when I went out and cleaned and refilled the dogs’ water dishes yesterday, the ducks STILL climbed in and splashed around? SO RUDE.

Ok, I’m back and have picked myself up off the floor from the cute… I just came across the following Game of Thrones reference… One that I am of the age to relate to!

Warning: if you aren’t up to date on Game of Thrones THERE ARE SPOILERS in this awesome, awesome video.

Sort of off topic: Have you ever considered a superhero alter-ego naming theme? I bring it up because I still think about the dynamic duo of Batman and Robin, who captured my heart thanks to your captions of hilarity. I know regular names aren’t all that exciting but I think a litter of Clark (Kent), Bruce (Wayne), Reed (Richards), Oliver (Queen), Norrin (Radd), etc would be cute… unless a lot of those names have already been used (I know CH doesn’t like to re-use names).

I LOVE this idea – and I have added it to my list of potential kitten litter naming ideas!

Ok, so how DO you pronounce Khaleesi? See, as an avid trek nut, I see it and cannot help but think “Kahless” the Klingon, (pronounced Kay-Less) but with the I on the end, I think Kahless-ie! (Kay-Less-EE)

I thought y’all would like this. The Game of Thrones language maker (official title) is upset people pronounce Khaleesi “wrong”. Claims its “KHAH-lay-see,” not “ka-LEE-see.” Of course, then the argument might be made he is spelling it wrong since he wants it it be Khalaysi (seriously, pronouncing “EE” as a long “a”, what?).

Kelly actually left this link on my Facebook timeline, too! I contend that we are NOT pronouncing it wrong, because that’s how they pronounce it on the series and he should just stop being a big baby. I’m pronouncing it “ka-LEE-see” and I recommend y’all do it that way, too!

I know I’ve said it before, but this time I mean it. These are the cutest kittehs evah!! I love how Leia’s all “YOWZA!” and Aslan’s giving her an amused look. I call this one “Leia and the eye boogers.” Aslan and Jareth in the cat tree. I actually walked into the room last night and there were four kittens stuffed in that part of the cat tree. I’m not sure how they did it or how it could possibly be comfortable. And he’s pretty diligent about it. Charming, up close. He has such a big, round head. Don’t be fooled by that look she’s giving me, she was purring up a storm. 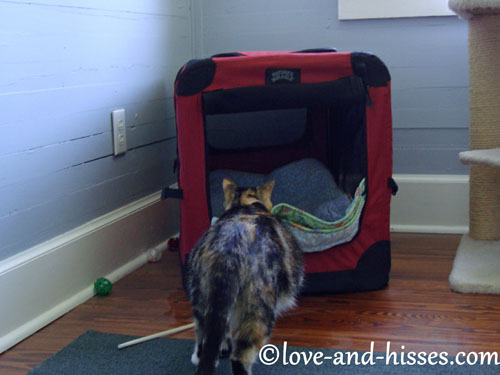 Checking out the potential birthing crate.

I had to run a few errands yesterday morning that had me out of the house for almost two hours. I just KNEW I was going to walk into the house and find that Khaleesi had had her babies while I was gone. I was wrong. 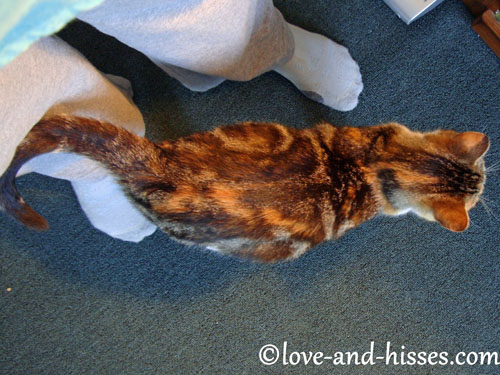 I truly don’t know how she can possibly be keeping them in there. Her belly is HUGE and her milk sacs are full (or close to it.) I even bought her a bigger crate to use as a birthing bed in case the bed Kate used didn’t meet with her approval. All systems are GO. Can we get this show on the road? PLEASE? 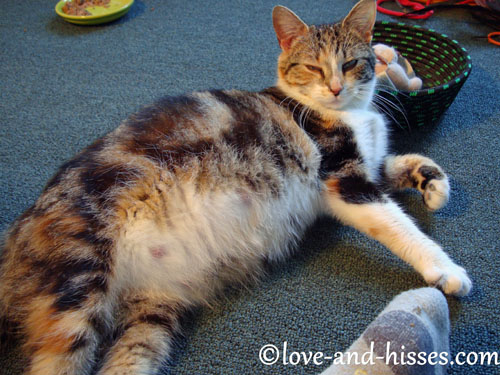 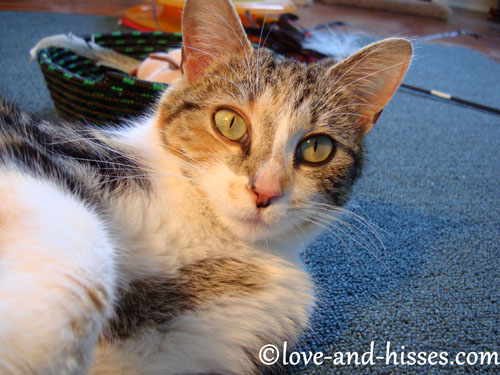 Corbie, sitting on my desk, and wondering why I’m not petting his beautiful, beautiful self.