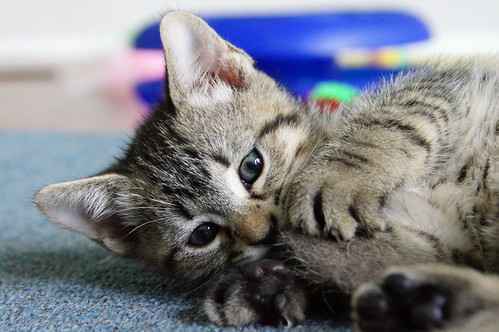 Darwin (or Razzie, I’m not sure which), playing with the Emmy-cat-hair toy. 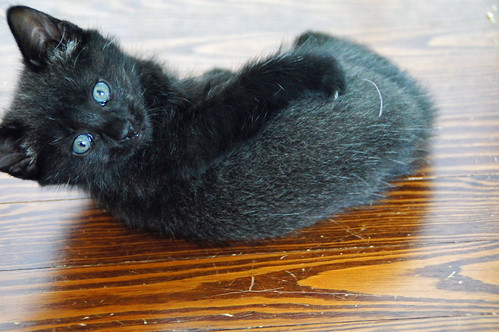 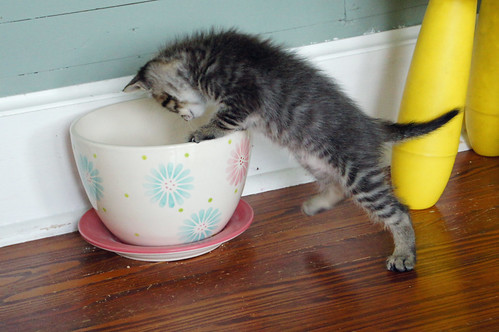 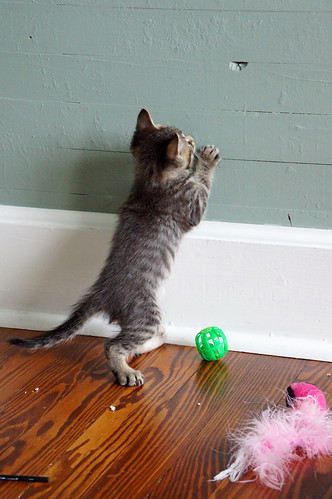 There’s this dent in the wall that they are absolutely obsessed with. 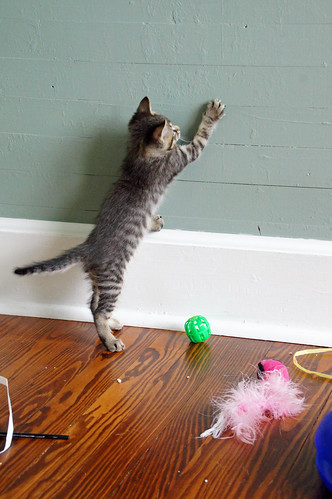 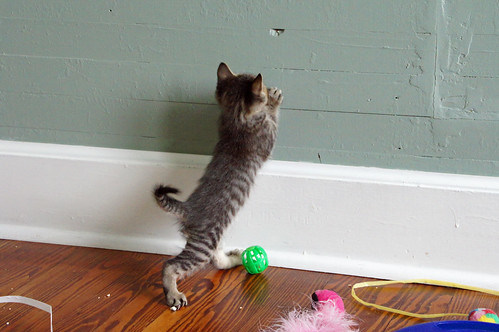 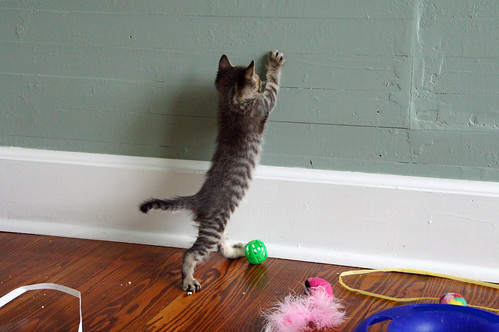 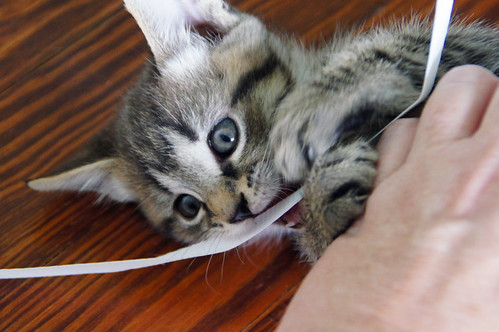 As much as they love playing with toys that cost me nothing (packing straps, wads of Emmy’s fur, milk carton rings), why do I keep buying toys, I ask you? (That’s a rhetorical question. The answer is, it’s an illness. I am incapable of passing up cat toys on sale.) 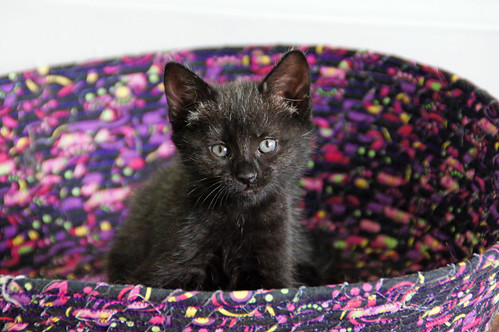 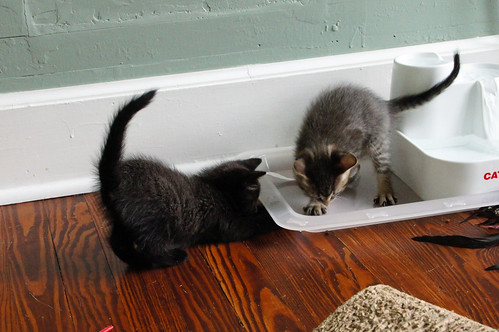 Newbery loves to get in this plastic food tray and dig at it. I’m not sure where he thinks he’s digging to, but he digs and digs (and Logie likes to help by digging under the lip on the side.) 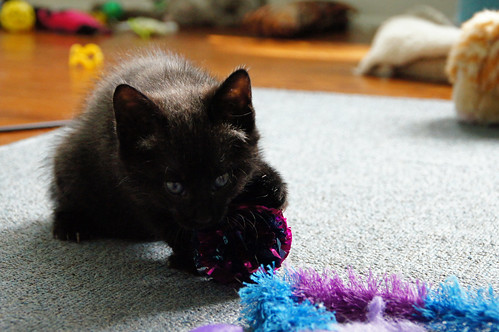 Logie, telling secrets to her toys. 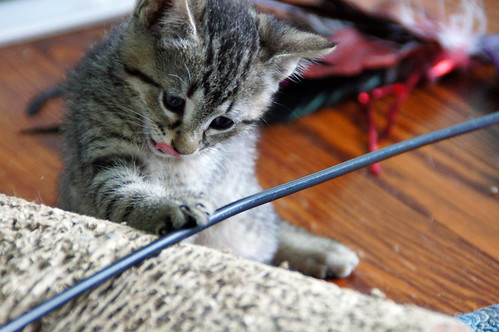 I weighed the kittens this morning. I thought for sure that Logie and Newbery were at 2 pounds, but they’re just under it. Both of them weighed in at 1 pound, 14 1/2 ounces. Razzie’s at 1 pound, 11 1/2 ounces, and Darwin continues to be my Little Bit by weighing in at 1 pound, 10 ounces!

Were you wondering to yourself, were you saying “Self? What IS the proper technique for coming down from the top of a cat tree? It is a mystery to me!”? Well, wonder no longer! Logie’s here to clear up the mystery:

And secondly, a video of the Noms playing like the little wild things they are, while Emmy has one of her many daily snacks:

Poor Stinkerbelle. She loves her Tommy so very very much, and he doesn’t always have the patience for her. 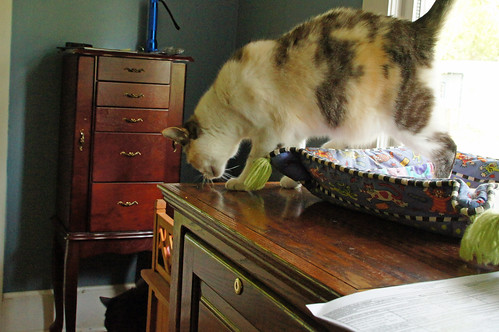 He was sitting in a cat bed on my desk just hanging out, and she came up to snuggle with him, whereupon he was like “Places to go, people to see, things to do! Seeya!” and jumped down. 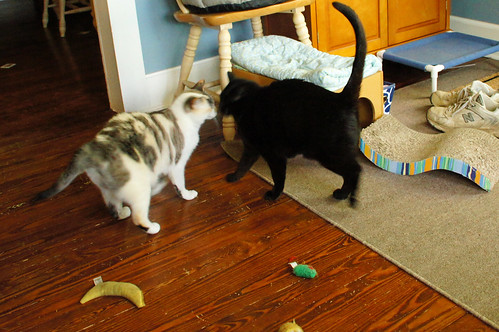 She followed him, and they bumped noses, and then Tommy was like “Did I mention I have places to be?” 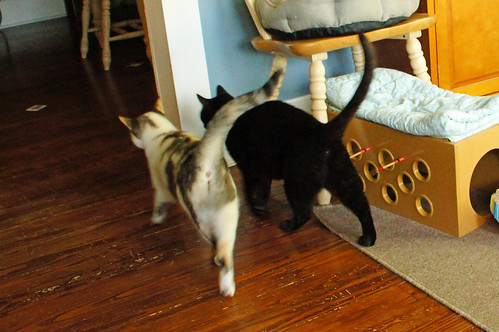 And Stinkerbelle said “I’ll go with you!” 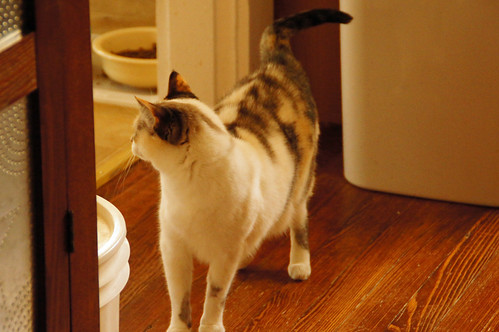 Whereupon Tommy said “Yeah, sure – only, did I mention that I have to be outside? Bye!” Stinkerbelle doesn’t go outside (she has never so much as tried to go out the cat door, which is probably a good thing, because I do not believe that putting a collar on her to keep her in the back yard would go over very well.) 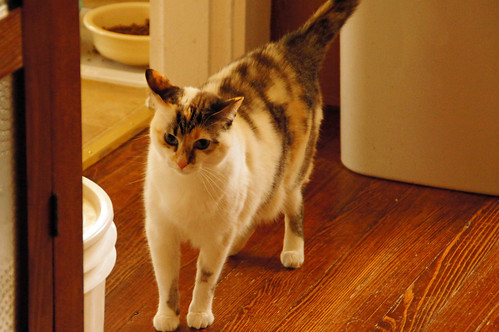 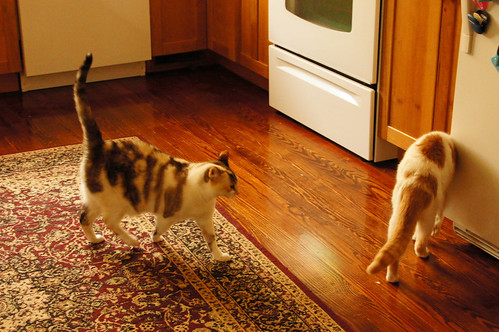 Then she set her sights on Spanky, who was minding his own business, rubbing against the refrigerator and hoping that the door might spontaneously open and eject some shredded chicken or baby food for him. Hasn’t happened yet, but that doesn’t mean it never will, right? 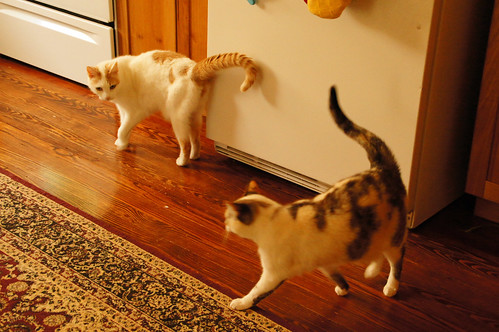 Stinkerbelle said “Myeeeeeeeeeeew!” and Spanky said “I do not understand what you want from me.” 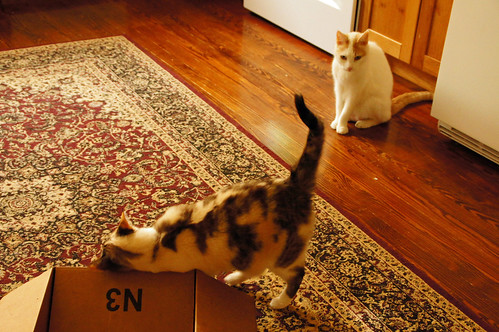 And Stinkerbelle said “See? I can be sweet. See me rubbing on Corbie’s Safe Place Box and not even hissing because it smells like him?” To which Spanky said “I do not understand what you want from me. I’m going to go take a nap.” 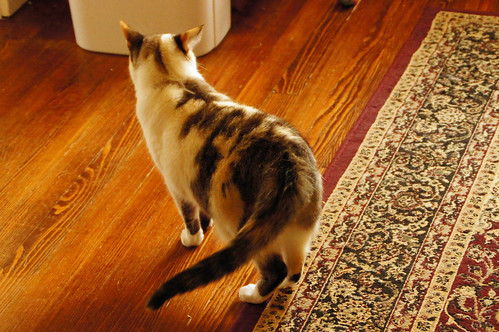