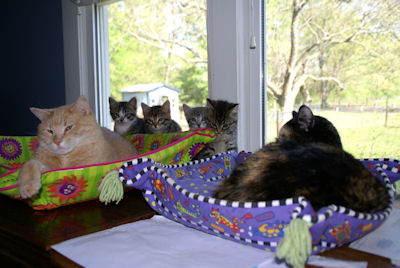 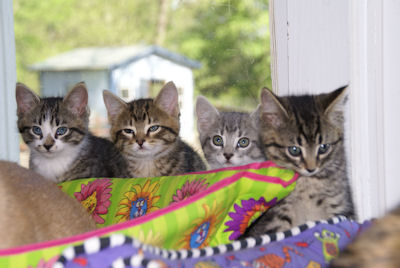 The Bookworms were clearly ready to curl up for a nap, but Newt and Miz Poo had control of the cat beds. Check out the baleful looks on their little faces! (And the smug look on Newt’s face in that first picture is cracking me UP.) 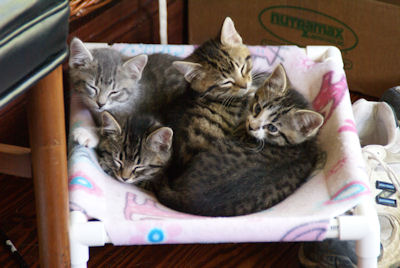 They opted for the Ham-Mick. 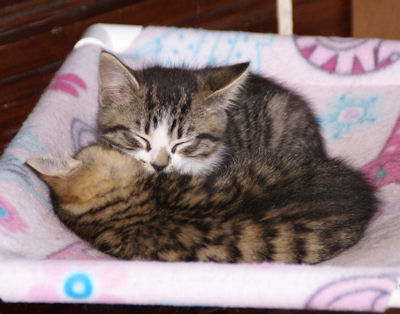 That’s Corbett in the front, Bolitar in the back. This picture makes me laugh because it looks like Corbett is half the size of Bolitar (he’s definitely smaller, but not THAT much smaller), and Bolitar looks like he’s all head. 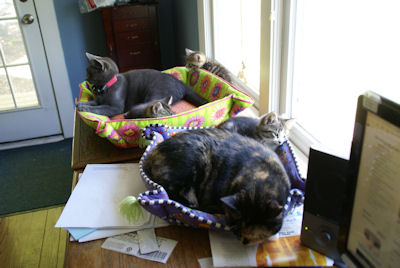 Note that while Miz Poo was sleeping, Bolitar climbed into the bed with her. She doesn’t scare him! What happens when Miz Poo wakes up and finds a kitten in the bed with her? You’d think she’d hiss and growl and smack, but she usually just sits there and looks completely disgusted before she gets up and stomps off. 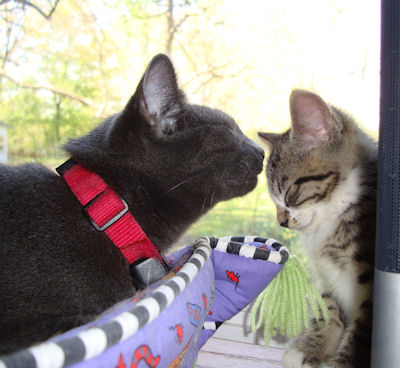 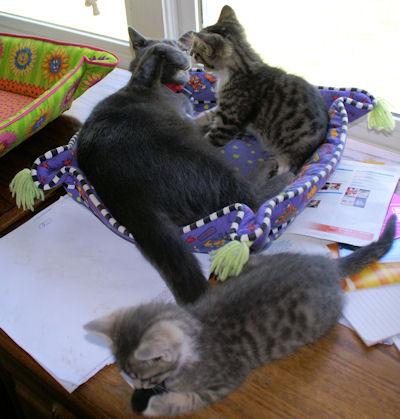 And then Bolitar and Reacher form a two-pronged attack. Bolitar’s in hand-to-hand combat, and Reacher’s got Jake’s tail. 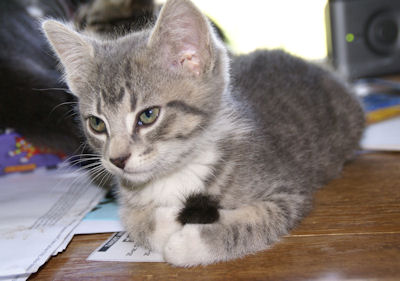 What a smug little face.

Though I have no pictures of Maura to share today, the news is that she got the all-clear from the vet! So we’re starting the slow progress of releasing her into General Population. When I got home with her yesterday, Fred put the blockade up across the upstairs hallway, and opened the foster cat room, which gave Maura access to the bathroom and my room. At some point Jake forced his way past the blockade, so when we went upstairs to go to bed, Jake was sitting in the hallway and Maura was hanging out under my bed.

We’ll let her have the run of the upstairs for a couple of days, then take down the blockade and see how she does with the run of the house. I expect she’ll be fine. She’s a laid-back cat, but she can stand up for herself (which we’ve seen in action when Jake gets too much in her face), so if anyone tries to pick on her, they’ll find out she’s no pushover.

I found this movie on my Flip Video over the weekend, and it made me laugh. I’m pretty sure the Cookie in the video was Keebler (even though you hear me gasp and say “MISSY!”).

Cats and kittens who scoot are the BANE OF MY EXISTENCE, because that is SO GROSS. I mean, they’re using your rug (or, in this case, the cat bed) as their TOILET PAPER and how nasty is that? On the other hand, it’s pretty funny to see. So while I’m mad and horrified and gasping and saying “MISSY!”, I’m also laughing. SIGH. They’re not even subtle about it! Which is probably a good thing, because when I see it happening, I grab the bottle of watered-down bleach and clean the spot where they scooted. Or in this case, I grabbed the cat bed and tossed it in the washer.

Cats are so nasty. 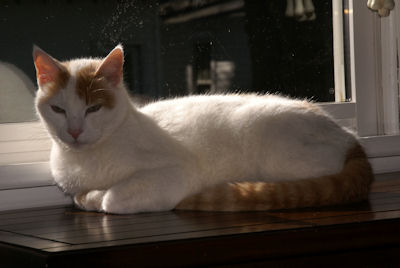 “I disapprove of scooting. And kittens. Also, war.”