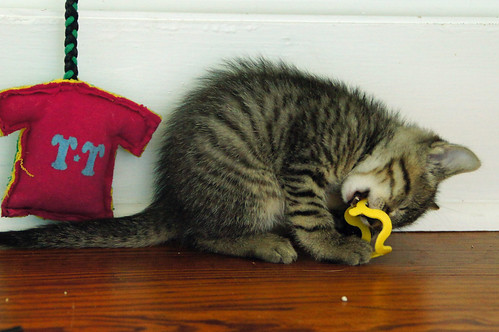 Darwin loves loves LOVES that little plastic ring toy. She thinks it’s the best thing ever, but refuses to pose with it on her head like a tiara. Brat. 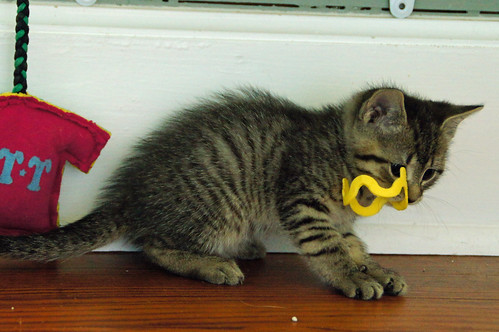 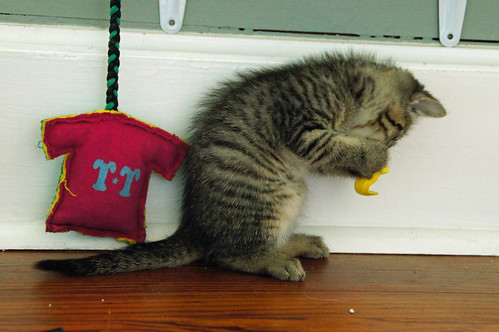 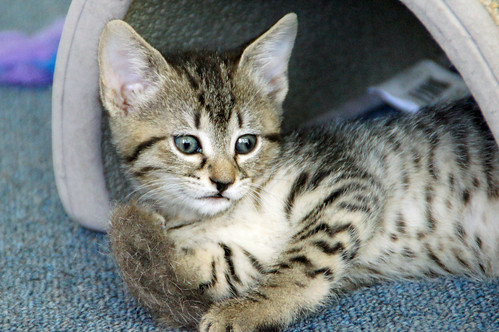 Though that LOOKS like a barfed-up hairball she’s playing with, in actuality it’s a cat toy made from Emmy’s fur. Fred Furminated Emmy, then gave me the fur and I rolled it up so that it would all stick together, and the kittens all think it’s an awesome toy. I’m sure the fact that it smells like Emmy makes it that much more appealing. 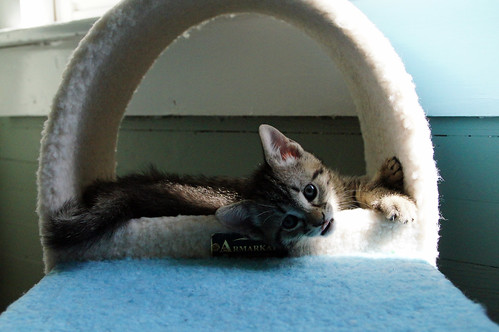 Darwin’s favorite place to sleep, usually with all her siblings crammed in on top of her. 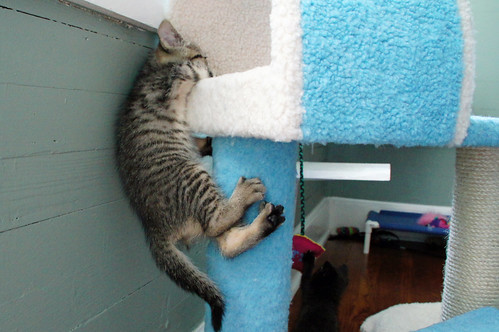 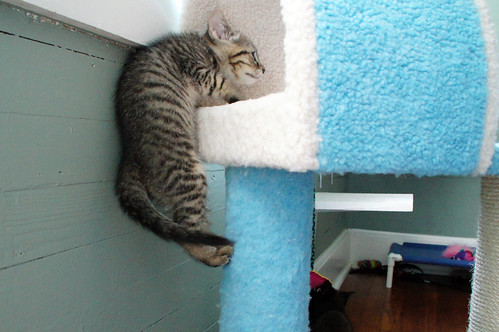 It’s hard for a Little Bit to get all the way up into that cat tree, but she always manages! 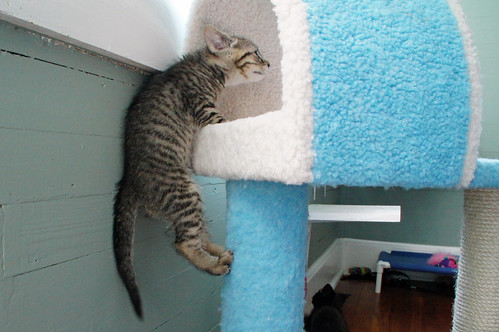 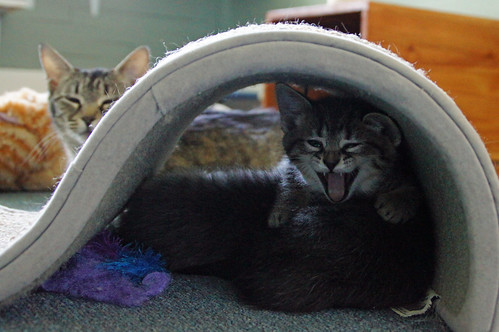 Demonstrating (1) How Logie makes a good pillow and (2) How best to yawn while showing off your sharp little teeth. 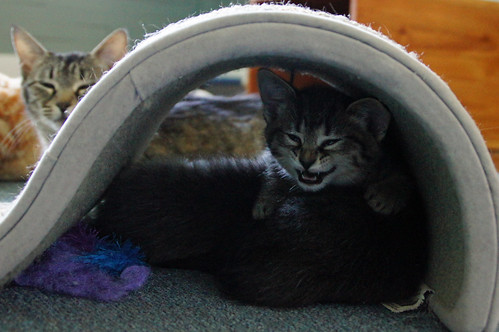 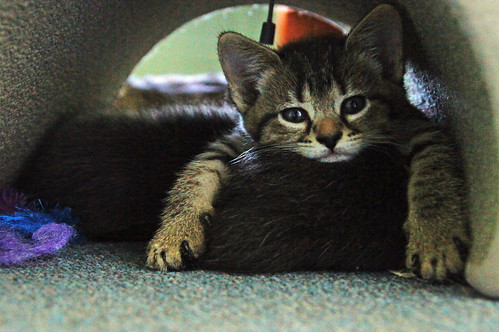 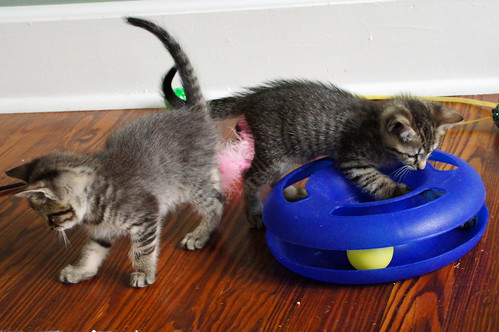 That’s Newbery on the left, Darwin on the right. Newbery’s more of a creamy gray, Darwin’s stripy-er. 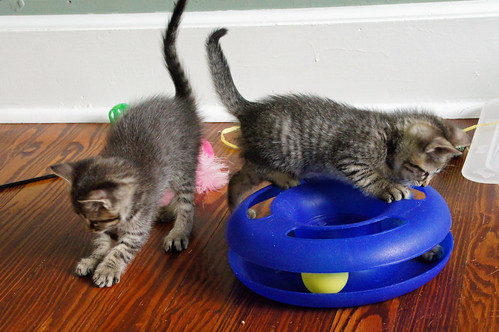 She’s determined to figure out a way to fit in that trackball toy. 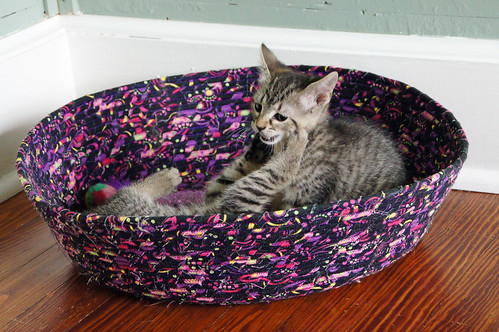 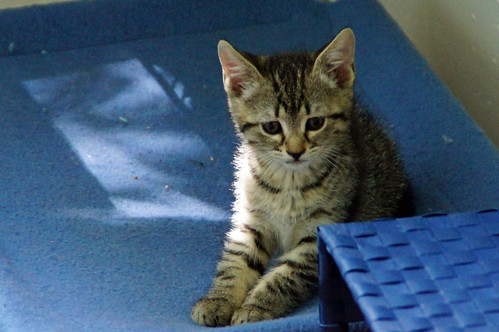 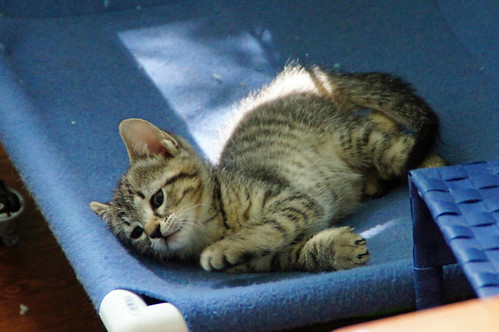 The sun is making her verrrrry sleeeeeepyyyyyy… 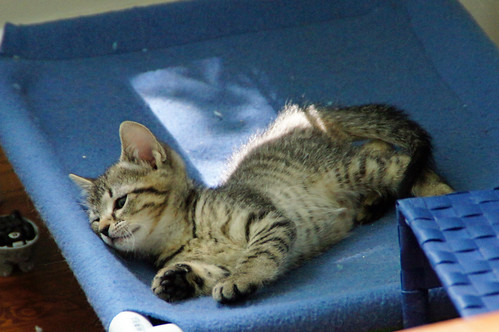 Darwin (nicknames: Darwinkle and Little Bit) is the littlest of the bunch, but that doesn’t slow her down one tiny bit. She holds her own against her siblings, and when she’s done kicking their butts, she flops down on top of them and uses them as body pillows. She used to be a tiny bit standoffish (which is the sure way to get me to try harder – she’s no fool!), but after many overtures on my part, she finally decided that maybe I’m not so bad, and when she goes running by and I snatch her up for some huffing, she puts up with it for a bit before she fights back (half-heartedly). (Are you following proper kitten-huffing procedure? You might need to brush up on the proper technique, just in case!)

Perhaps because she’s the bittiest of the bunch, she’s behind in eating actual kitten food, and can still occasionally be found dining from the litter box buffet – she gets a mouthful of litter, then spits it out. I’m not quite sure what she thinks she’s accomplishing from that, but if she doesn’t stop it soon, I’m going to start getting serious about convincing her that canned food is what she really wants (as it is now, when I put her at the plate with Emmy, she sniffs the food and then paws at the floor to try to cover the food. Silly monkey). 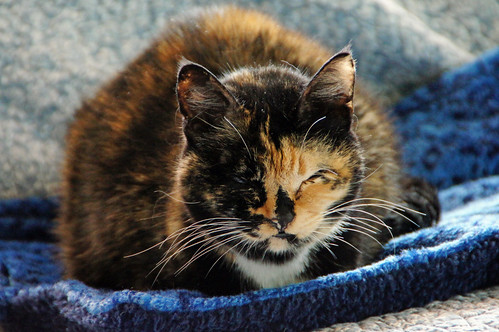