And if you think Your Lucy’s giving you A LOOK, check this one out.

Isn’t that statue awful? It does make me laugh, though!

Is it me or does “Sweet Sleepin’ Gilda” look like a baby otter?! I can see that! Someone else said she looks like a mole, and I can kinda see that, too. She’s got that sleek look to her, unlike her fluffier brothers.

In gardening, if a plant has spent too long in a pot that is too small, the roots can get tangled and the plant grows to the limit of the size of the pot and it is said to be pot-bound. If you transfer it to a larger pot (or plant it in the soil) it suddenly shoots up in size, putting one a great deal more growth and activity than you’d see in a plant of similar initial size that had been in the larger container all its life.

I think your kittens were womb bound and are now growing like weeds.

WOMB BOUND! I think you’re right, and that’s the best description ever. (Also, I have to admit that after I read your comment, I thought “Hmm… a litter of kittens named after Weeds is a good idea!” Yes. Yes, it is. Duh!)

Are kittens that are super hissy at this likely to grow up to be big talkers? I ask because my little girl was a VERY hissy kitten, and now never shuts up. We joke that she likes to hear herself talk because she walks around all day making little throaty meows to no one.

That is a good question! I don’t know the answer, though, I’ve never thought to pay attention. We’ll have to see if these kittens are talkers!

Robyn, do you know why you seem to get more boy kitties than girl kitties? I was reading through the archives and you said [some kitten I can’t remember, Arya Stark?] was the 100th girl and you’d had 118 boys, or something like that. Is this just a coincidence or are there more boys born than girls? Googling “kitten sex disparity” is not as helpful as you might think.

ETA: Just watched the video–if I didn’t know they were hissing, I’d think something was wrong with their breathing! I wonder what sets the hissing off? Just mama not being right there?

Yeah, I think Mama not being right there is what sets them off – if they were in the wild (thank god they’re not), I imagine they’d do it when Mama was off eating, in an attempt to scare off predators who might come poking around.

I’m not sure why I get more boys than girls – someone once told me that the sex of kittens tend to come in cycles and could have something to do with the weather at the time of conception, but I don’t know if that was just conjecture or if there’s actual science behind it. I figured out at some point in the past few months that I’ve had something like 54% boys, 46% girls (a few years back, it was 52% to 48%), so there is a difference, but it’s not a huge one.

The trouble in my house is that the container for dried cranberries, one of my favorite snacks, sounds just like the cat treat bag. So every time I get a snack, the cats have to get one too, or else I’m teasing them.

We keep the cat treats in a quart-sized Mason jar, and every time we open ANY jar, the cats come running. A few of them also come running when they hear the can opener, although we’ve never fed them food that needed to be opened that way, so I’m not sure why that is. Jake goes crazy every time I pop open a can of cat food for Lucy… and she eats several times a day, so he goes crazy a lot!

Have you been able to give them kisses yet?!

I’ve managed to sneak a few kisses in, but kissing training will need to start pretty soon. Lucy’s good about letting me kiss her, but she gets annoyed after a while. And those kittens need to learn how to take a kiss and keep on going! Sometimes, when the kittens are curled up sound asleep, I SCOOP ’em up in my hand and hold them. They eventually wake up, but in the meantime it’s fun watching them all curled up in my hand. This is Rickles’ belleh. It is white. And this is Louis’ belleh. It is delightfully spotted. 8 days old! Compare that to: She has such an expressive face. “I see what you’re doing there, lady.” Couldn’t you just snatch that girl up and kiss her? 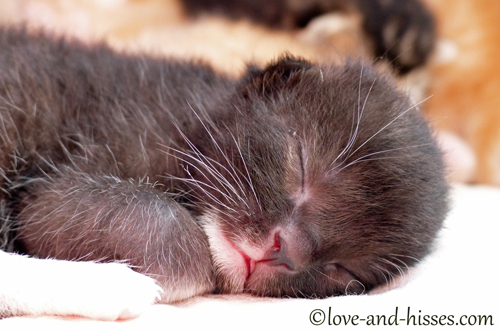 She spends a lot of time with her tongue sticking out of her mouth. She better watch out, it’ll dry up! 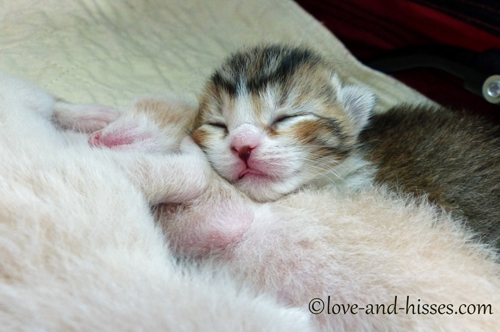 And Roseanne with the tip of her tongue sticking out. Apparently it’s a family trait. 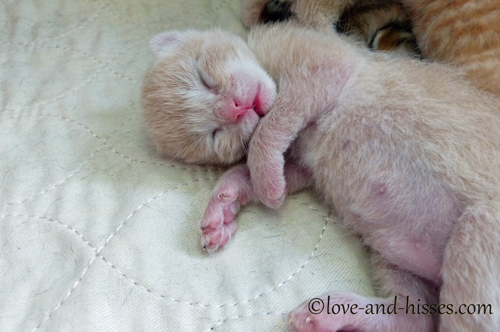 Seriously. I can’t even, with these kittens. How dare they? 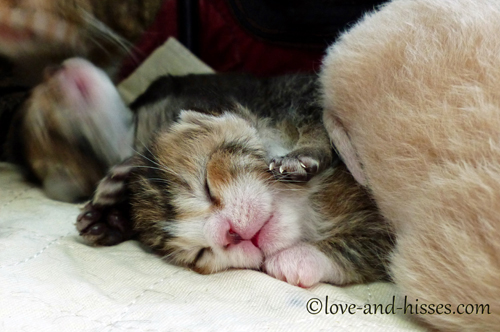 Roseanne with Belushi’s foot in her face – and she don’t carrrre. 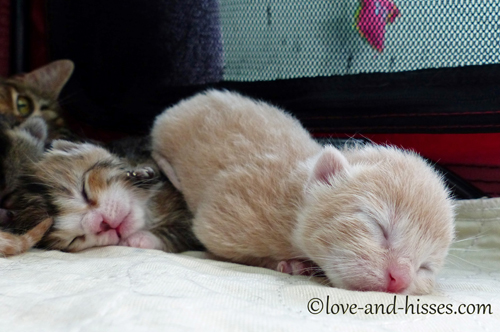 She also doesn’t care that Skelton is lying with his back end on her. (Please note Lucy in the background, there, keeping an eye on me.)

No new eyeballs yet – Shecky’s the only one so far. The others are very very close, I think. I’ll be surprised if at least a few don’t open this weekend.

Video! Shecky, the one-eyeballed boy, was the only one awake and was trying to tell me something. I love how, at 14 seconds, he looks away all “You don’t GET IT! Hmph!” Also, bonus hissing from Roseanne at the end. (By the way, his eye was a bit goopy when it first opened, so I put some ointment in it, which is why it looks a little rough here.) 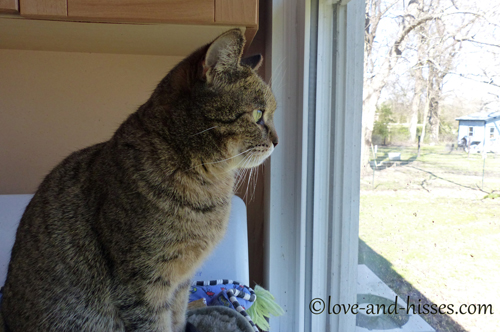 Sheriff Mama keeps an eye out for trouble.