I know that the site has been down a lot lately – last time I had this kind of issue was when Maggie had her babies, and the site got so much traffic that my then-host shut down the site without any warning, and OHHHH did the expletives fly here at Crooked Acres, believe you me, and as a result I switched to GoDaddy. I don’t know if it’s the same sort of problem this time around or if everyone at GoDaddy is too busy looking at kitten pictures to make sure things are running right, but I’m in the process of looking for a new host. I don’t know when I’ll be switching over, but I imagine it’ll be soonish – and I’ll do my best to warn you before that happens (and to make sure it happens on a weekend instead of during the week.)

I know how frustrating it is not to be able to get to the site when there are kitten pics to see, but I’m doing my best to get this nonsense resolved, believe me.

Calsifer asked that I send along heartfelt thank yous to those of you who sent kind thoughts and suggestions for Bam Bam. Calsifer said The L&H community is such a cool bunch and I’m proud to be associated, however remotely, by lurking.

That is absolutely the truth – you guys are amazing! 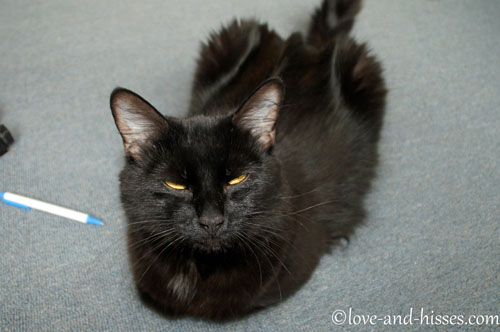 “I just got those babies to calm down. You rile them up, I am going to KILL YOU.” 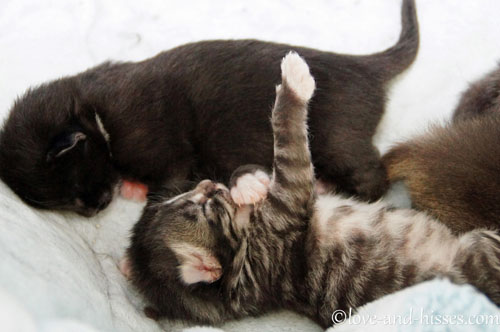 “My goodness! These claws are appalling! I need a pedicure, stat!” 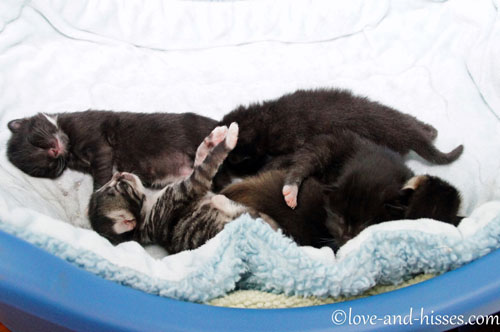 Jareth was so curious about what was going on with Leia and her terrible claws that he rolled over, and I heard a ::plink!::, and then… 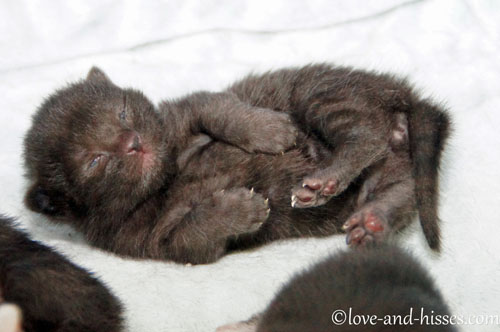 All of a sudden! Eyes! 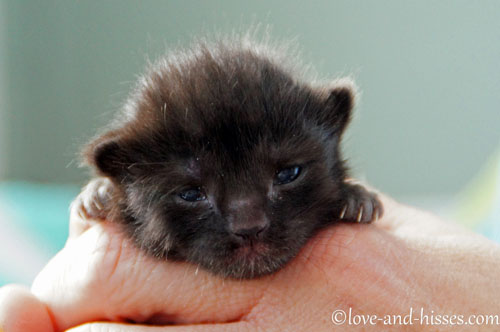 “I see you! Okay, no I don’t, I’m not quite sure how this “focusing” thing works, but I can see a vague shadow of you!” 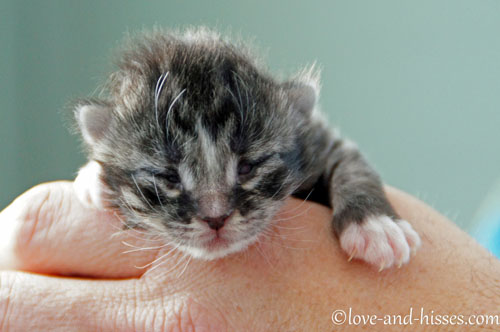 And also, Leia has eyes, too!

So far, everyone except Buttercup has at least a little bit of eyeball showing. Buttercup’s pretty sure there’s nothing worth seeing, so she’s keeping ’em closed (I suspect by Monday they’ll all have their eyes open; she won’t want to miss out on the fun!) 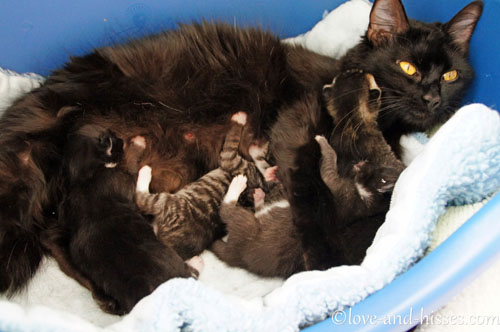 “No one told me they were going to be able to SEE.” 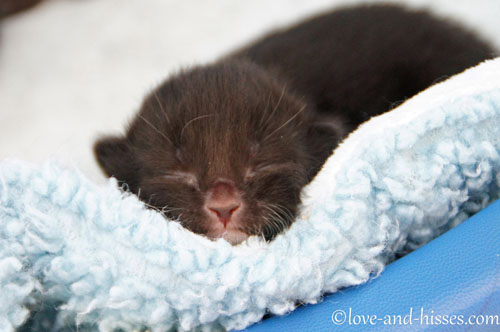 Charming (I think it’s Charming. Could be Jareth, Jareth has a bit of frosted fur on his chin too). 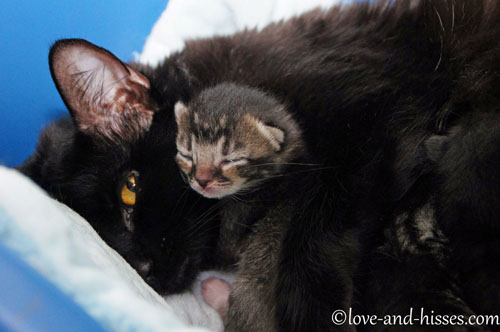 Do you think maybe Aslan likes his mama just a tad? 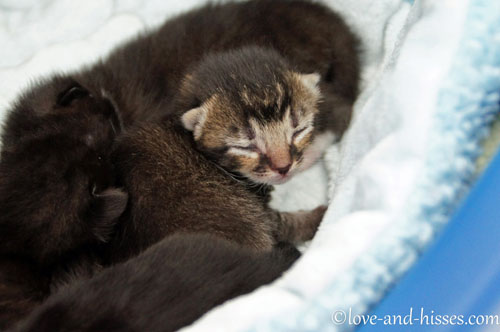 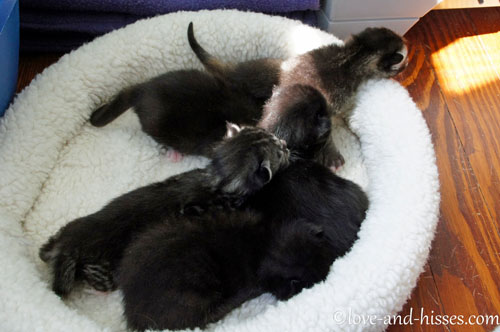 I put them in this bed so that I could shake out the bedding where they usually are (Kate had tracked some litter into the bedding), and they weren’t sure what to think. 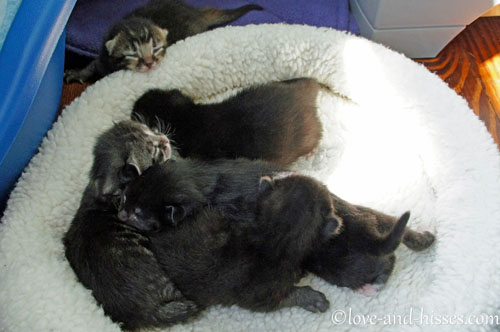 Then suddenly Aslan showed that he’s the explorer type. 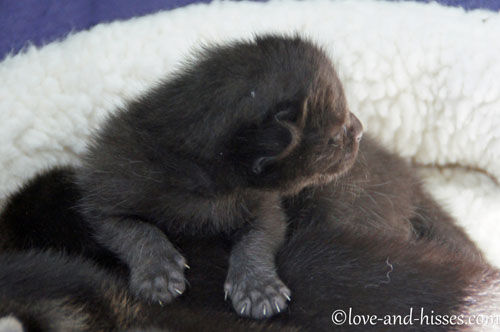 I swear Jareth looks like a wee little lab puppy in this picture. 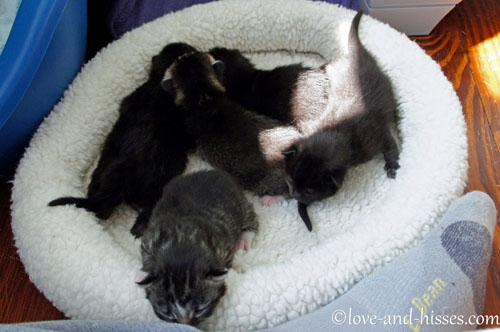 You can see Leia at the bottom of the picture, sniffing my leg. What I didn’t capture was her hissing at me. I was terrified. Terrified, I tell ya! 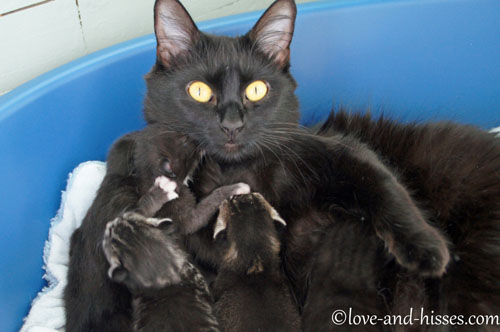 Kate looks overrun by those kittens, doesn’t she?

I weighed the kittens yesterday, you can see the chart at the bottom of this page. Charming is just HUGE, at 9 3/4 ounces. I think he’s going to be a big boy! 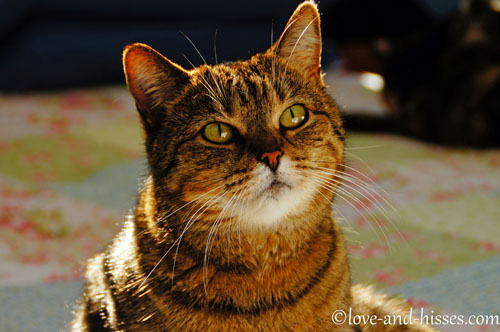 Sheriff Mama (Kara) soaks up some sun rays and tries to decide who to arrest next. A law woman’s job is never done!