Someone else has probably already mentioned it, but Corbett is very VERY Bengal. He looks just like my Ozzy. Believe it or not, no one has mentioned it – but I absolutely agree! Bengals really like water, though, don’t they? Corbett hasn’t shown any interest in water… at least, not yet!

Have you or anyone else out there ever used The World’s Best Cat Litter?? Expensive corn based litter…I’m in the process of trying to convert one litter box upstairs in the hopes of cutting down on litter dust. I HATE litter dust.

I have a bag of it, and I use it when I’ve got little ones who have just started (or are about to start) litter box training, since it’s safer for them than the Fresh Step I use for the big cats. Back when I was first considering buying it, a few people told me that they didn’t care for the smell of the litter. The smell isn’t offensive to me – I mean, it’s got a distinct smell that I notice, but it doesn’t bother me. I don’t use it in all the litter boxes because of the cost, and because (in my opinion) it doesn’t clump as hard. Your mileage may vary, of course, but if you’re going to buy some and give it a try, check out this page for links to the rebate page.

Now here’s a question for you! I’ve been reading here for absolutely ages but I can’t for the life of me remember if you’ve already mentioned this. Has Coltrane been “done”? And if he has did he only have one ball?

I’m not being really pervy but my cat Gizmo who looks so similar to Coltrane has a high pitched meow quite like that and he only had one ball… so I wonder if its anything to do with that? Or just cos they are ginger?

We did have Coltrane neutered soon after he first showed up this Spring – as far as I know, he had both of ’em; the vet didn’t say there was only one, and I didn’t think to ask, so I’m guessing both were present. Newt also has that really high-pitched meow, and he’s a similar shade of orange, so maybe it’s a color thing. Or possibly the two of them are related, we’re not sure.

Sugarbutt, our other orange kitty (he’s darker than both Coltrane and Newt) doesn’t have the super high-pitched meow. Sugarbutt always sounds like he’s asking a question when he gets going. That’s another movie I’ll have to try to get!

Susan sent me the link to this article, and I’ve been meaning to post it for ages (it made her think of me because they refer to the cat’s expression as “smug”, which I also do. And I have to agree, that is one smug-looking cat!)

Cat sneaks on to train, gets lost, is reunited with owner via Twitter.

I’d like to ask you about kitten behavior… I have a kitten, maybe 4 or 5 months old, I believe he was taken away from his momma too young as he was miniscule when I adopted him (my local humane society was so over filled they were adopting out cats for $15 for the first one, $5 for each one after. I grabbed two babies, the $15 baby was a very sick kitty and although I tried he didn’t make it). He was barely bigger than my hand and I have tiny hands. He liked to nuzzle my neck and face, which is precious, but he hasn’t grown out of doing that. He does it with such urgency, very important nuzzling, it’s cute and loving, but I have to get some sleep. Yes, he wakes me up to press his cold wet nose into my face and neck. I’m trying to be consistent at stopping him before he starts when I’m awake, but he doesn’t seem to be getting the message.
Any suggestions?

I have no helpful advice on this topic – none of my cats do this. Though now that I think about it, Sugarbutt used to wake me up in the middle of the night every once in a while, kneading on my shoulder and licking my neck. He stopped doing that of his own accord not long after we moved to this house, over three years ago. I don’t know why he stopped, maybe he grew out of the behavior.

Y’all, help me out here – who has helpful suggestions on this topic for Becca? 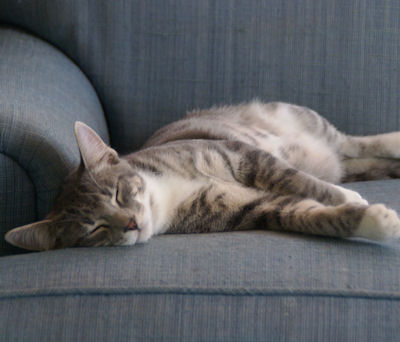 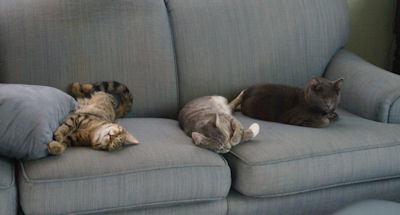 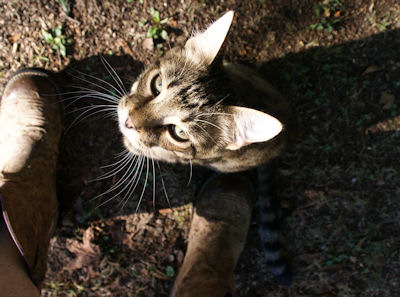 (Yes, I am wearing boots with shorts. Don’t mock me; Corby’s clearly already doing that.) 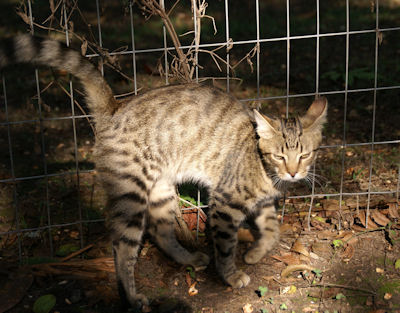 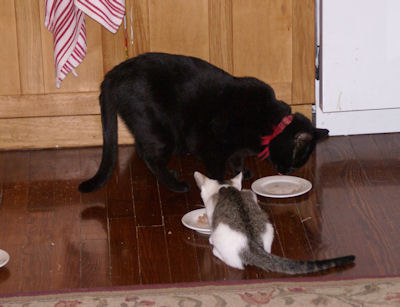 I mentioned, perhaps, that Martin helps out during afternoon snack time? After only a few days, he already understands what the sounds of snack time are (me taking plates down out of the cabinet), and he’s with all the big cats, meowing and pawing at my legs. 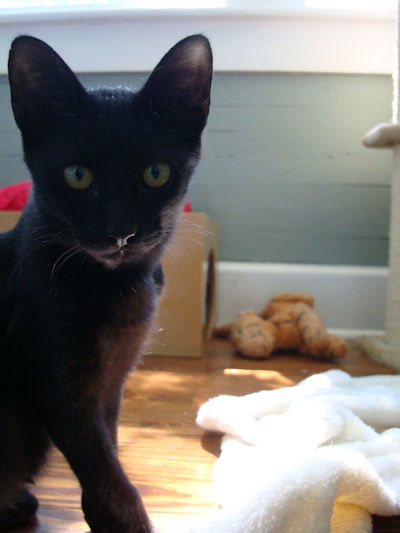 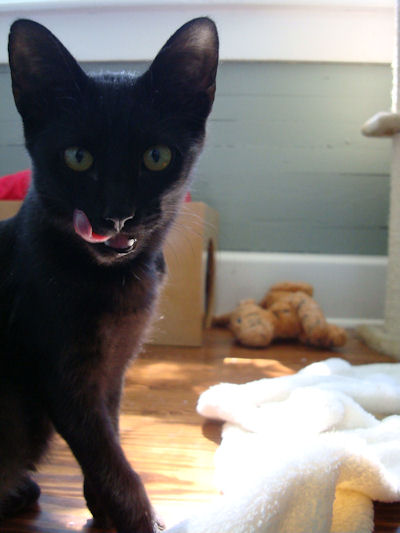 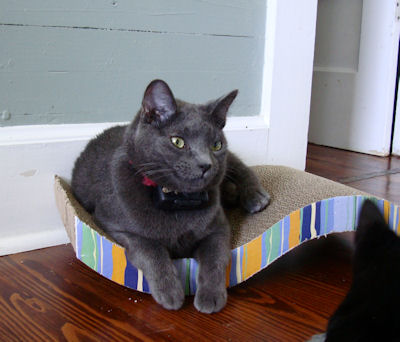 Loony Jake, hanging out in the foster room.