Thanks, you guys, who commented and emailed to let me know that my picture of The Seven had been used over at I Can Haz Cheezburger. I happened to see it at ICHC right before I went to bed last night, so I emailed them, and should receive credit for having taken the picture at some point.

That picture is one of my favorites, and it was kind of nice to see it surface, a year and a half later. It was featured over at Cute Overload last May, too, which I think means… well, I’m not sure what it means. I’m very special, I guess! 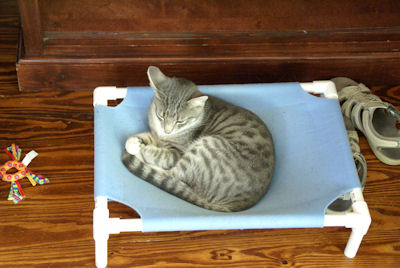 The fabric that came with the Ham-mick I got last Fall (or perhaps it was earlier this Spring?) is starting to get kind of ratty looking because certain kittens (ahem, Reacher) like to knead on the fabric for seventy-two hours before they get in and lay down. They use their claws, and the fabric gets pulls in it, and Fred doesn’t care for the patterned fabric anyway. I thought about buying some new ones from the lady I bought the Ham-micks from, but I have a TON of material and a rarely-used sewing machine, so I thought that I’d see if I couldn’t use the fabric that came with the Ham-mick to make a pattern to follow and make one myself. Well, I made a pattern, and it actually worked out pretty well. But you’ll please note that I’m not showing it to you in DETAIL or anything, because I can’t sew a straight line to save my life. Who do I have to impress, though? Reacher likes it, and when Reacher’s not in the process of liking it, Sugarbutt also likes it. It’s almost always occupado, which says “two thumbs up” as far as I’m concerned! 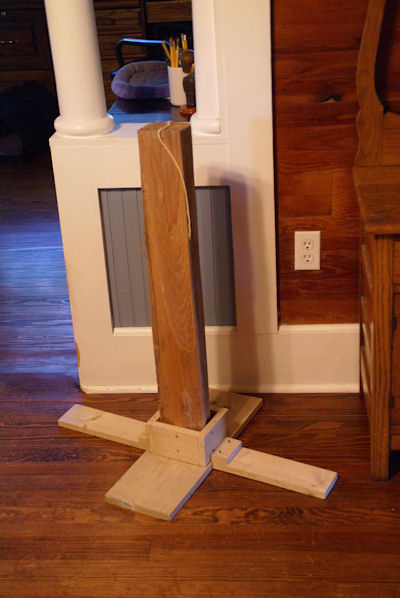 I didn’t actually make this, but I – uh – coordinated it. We were at the shelter a few months ago, and there was a cedar scratching post in the big cat room. I started looking at it and said to Fred, “We could make something like that, couldn’t we?” A few weeks later, we went to Lowe’s and found this cedar post, which is not nearly as nice as the post in the cat room at the shelter, but it was cedar and I thought it would work. Last weekend, I harangued Fred into getting something done with it, so he cut the post down, made a base for it, and screwed it in. I stapled some yarn toys to the top and sprinkled catnip on it, and the cats are liking it quite a bit. Especially Reacher! It’s not particularly gorgeous, but I like it. I’m going to sand and paint the base, and probably sand the post itself a little. 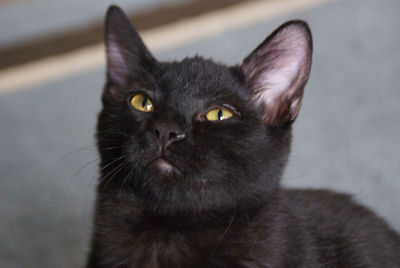 What I really want to get a picture of is the tiny patch of white fur Dodger has at the base of his ear. When I got him, there was a bare spot there. I realized one day last week, as I was petting him, that the fur there has grown in white. It’s very neat. 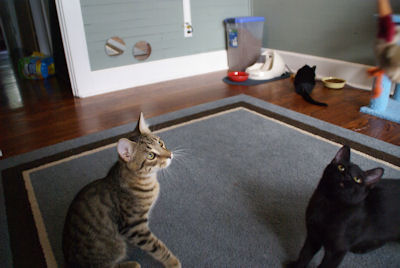 I love what a non-issue it was to integrate the Bookworms and the MMMs. I was afraid, given Bolitar’s drama queen ways, that Reacher and Corbett might be hissy and smacky, but they act like they’ve known the little ones forever. 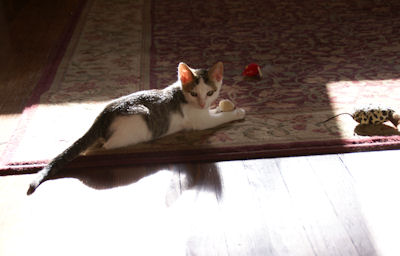 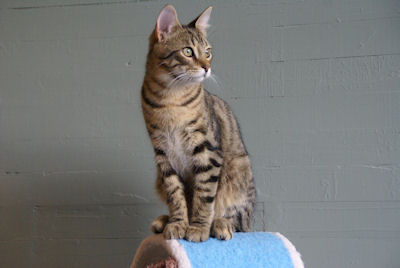 Can you tell where Corbett’s favorite place in the foster room is? No? It’s a mystery! 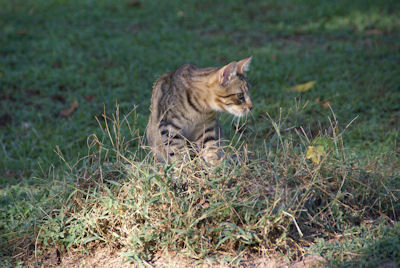 Corbett, in the back yard. When we bought this house, there was a cedar tree there. It wasn’t in great shape, so Fred cut it down, leaving a bit of a stump behind. Corbett has claimed it as his own. 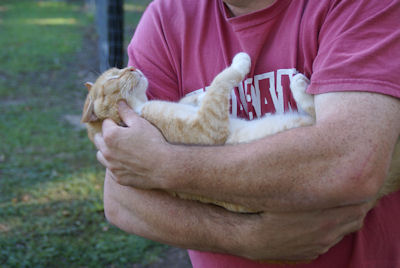 From mostly feral to being held like a baby in, what, three months? Coltrane has turned out to be a lover.