The look Purslane gives you made me think you could have a whole series called “Not Judging You.” Stompers, of course, then Purslane, the pic of Petey Pickle on the sidebar has that “not judging you” kind of look, Stinkerbelle, Miz Poo…

I’m going to make a point of trying to get a Purslane pic with the full extent of her “I’m not judging you… but I am a little disappointed in you” look!

I just had to come back to post this link to Doug Savage’s cat cartoons. They’re hilarious! I especially like the cat training ones but all of them are good!

When do [the Weeds] go to Petsmart?

We’re waiting for room to open up for Purslane and Thistle.

Dandelion had her third FIV test yesterday, and it came back very positive. They sent off her blood for a Western Blot test as backup. The results from the Western Blot should be back the middle of next week, but given that all three of the SNAP tests came back hot positive, I don’t expect to see anything but a confirmation that she’s FIV positive. Assuming that that’s so, Dandelion will stay here with us and her picture and description will go into the book of available kittens at Petsmart and up on Petfinder as well (she’ll be marked as “special needs”). Given that she’s white with blue eyes – and GORGEOUS and sweet and wonderful – I have no doubt she’ll find a home, maybe even before her sisters do.

If you or someone you know is interested in adopting her, you can contact the shelter manager (the email address is at the bottom of this page) and get the ball rolling!

Is it just me or do I see the same “Purslane is not impressed” look made so famous by the US gymnast in this summer’s games??? Okay, it could be just me… but it made me smile and as today is starting… a chuckle was definitely needed! Ha – I definitely see the resemblance!

Robyn, that great Dandelion photo needs to be juxtaposed with that similar one of baby Tommy. I still love that picture of wee Tommy so so so very much! (Originally posted in 2005.) I also love that in both pictures, there’s a tortie on the floor supervising.

Got my Stompies calendar and mug today! Love them!!

I’m so glad you love them! If anyone wants some Stompies gear, check out the store here. (All items are marked up by a couple of dollars, which goes to Challenger’s House at the end of the year.)

I had to hide Da Bird in the bureau drawer. The cats were getting up on the bookshelf in the middle of the night and dragging it down. 🙂

When the Peppers were here, Everett would climb up onto the bookcase and drag Da Bird out to play with. They certainly love that thing!

Is that Miz Poo, porking on the Weeds’ food? She doesn’t look very big compared to the kittens.

Portly Poo partakes, porkily.  Yeah, she’ll go in and check out the food and eat a few bites. It’s the only thing that makes venturing near those bratty girls worth it, in her opinion.

She’s not a very big cat (despite the years that I’ve spent referring to her as “portly”), she’s around nine and a half pounds right now. Except for Kara and Spanky, she’s the smallest permanent resident.

My cats ignored the kitten noises, but Bill’s name in a past life was apparently Turkey, as every time you said “Turkey” or “Turk-turk” in the video, he headbutted the screen and talked back to you. So weird.

I’ve had him since he was a little older than 8 weeks, and he was Annie in the rescue center until they discovered he was a male calico(-ish) and changed his name to Andy, so I really don’t think he’s ever been called Turkey in his life, but MAN he really was fascinated by that word.

While I typed the above, he meandered out to the front of the house. As a test, I said in a loud but not particularly “calling” voice “I wonder where the turkeys are,” and sure enough in ~five seconds he came flying in yowling at me to see what I wanted. How bizarre!

Anyway, I don’t know how I forgot about your turkey-having days, but while watching that video all I could think was: Scoop-Hands!!

Maybe Bill thought you were offering him a turkey snack!

I sure do love my Scoop Hands still, so very very very much. They’re $15 and totally worth it!

I’m a little surprised that Magoo is still at the store. Figured Fred would have gone and brought him home by now.
Something tells me if he did that, he probably wouldn’t be in the dog house for very long.

Shhhh. Don’t go giving Fred any ideas! I thought for sure that Magoo and Joe Pickle would have been adopted by now. Right now I think the only thing stopping Fred from going to Petsmart and getting Magoo is the knowledge that if he brings Magoo home, poor Joe Pickle would be left there alone. God help us if Joe Pickle gets himself adopted and Magoo doesn’t!

Last week one of your readers, Russell, posted about two cats he and his wife had met at Petsmart in Alexandria, VA. I was finally able to get there this afternoon. Neither one was there, and no Petsmart employee there at the time could give me any info. I do so hope both were adopted into great homes! Russell, if you are still wondering, maybe you could contact the rescue? Or, if you do know, perhaps you could share? Thanks!

And yes, the cages were full of kittens and young cats, but I lost my heart to a three year old Tortie who had just arrived. Folks had put in one of those plush tent shelters and she was hiding in there. There was a note asking that it stay in her cage as it helped her relax. If only I could adopt another cat, she’d be home with me now!

Russell, any idea? I suspect that they were likely adopted – I certainly hope so, anyway! 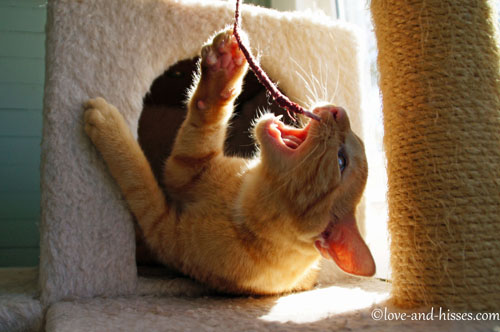 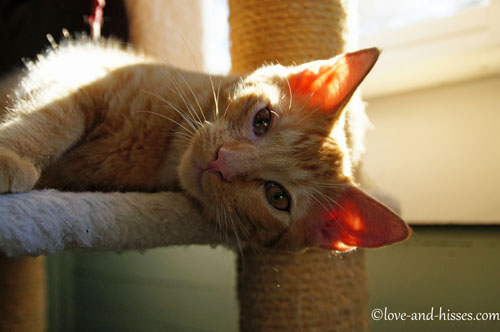 Sweet boy. Mr. Stripey’s right eye is his leaky eye; I think it’s looking better than it did two weeks ago. 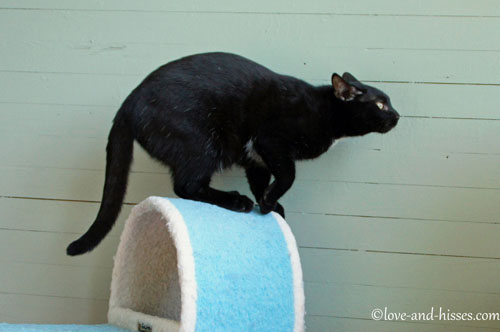 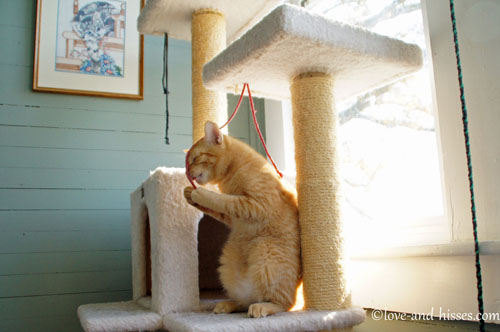 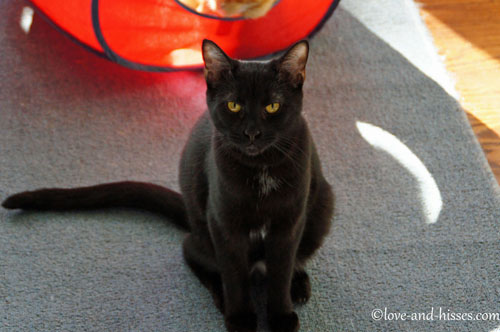 Kohle, waiting for me to sit down so he can be petted. 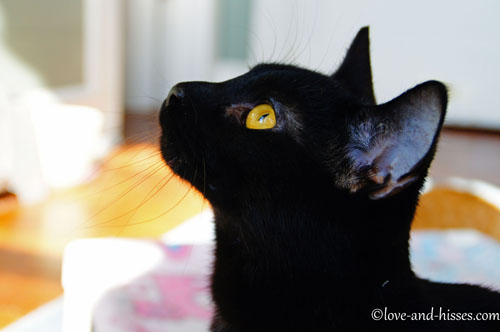 Kohle has got really gorgeous eyes. 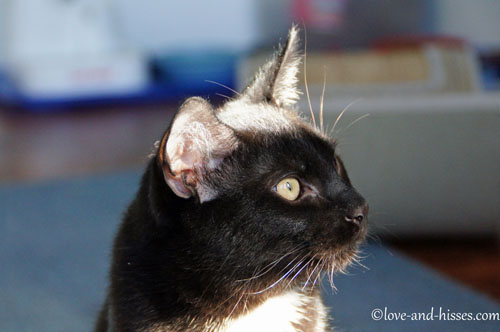 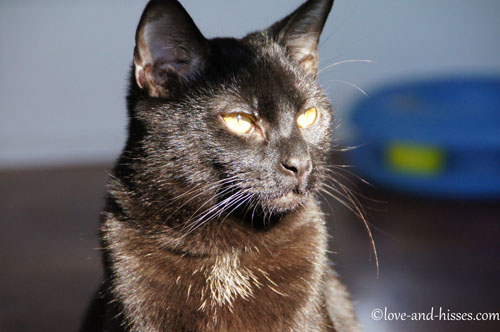 Kohle again (he has a much smaller “locket” than Dingwall Scotty does. He was wearing a yellow collar when I brought him home, but he kept managing to take it off, so I left it off because I can tell the two black cats apart. If nothing else, I look for Dingwall Scotty’s one white toe.) 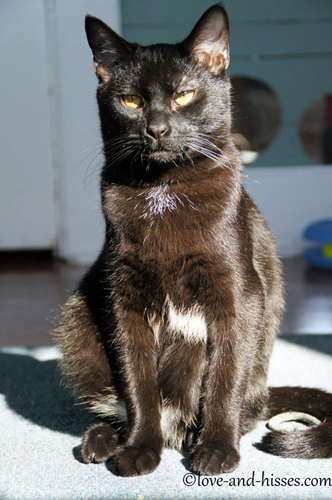 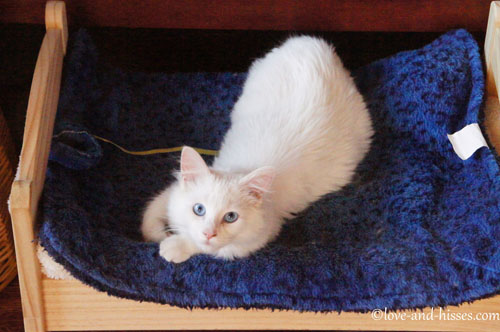 Princess Dandelion on the doll bed. 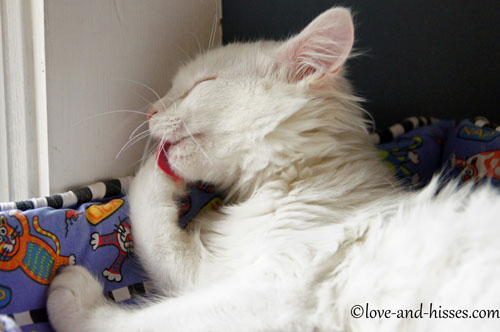 Bath time for the princess. 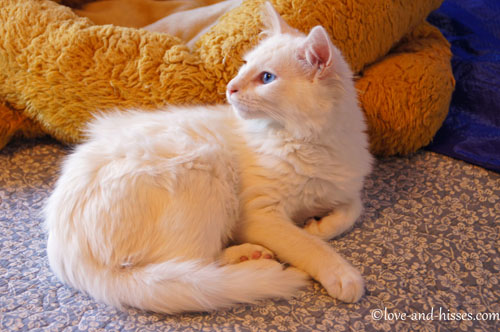 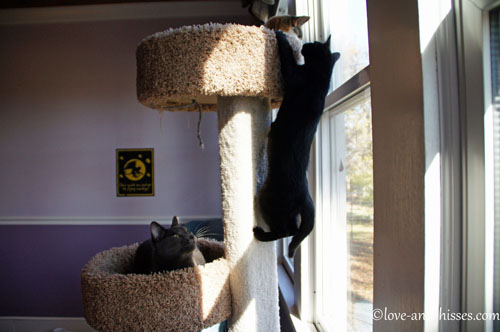 Thistle climbing up the cat tree, while Jake watches. 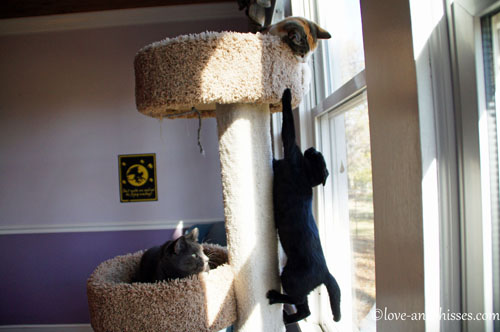 And after Alice gave her a smack. 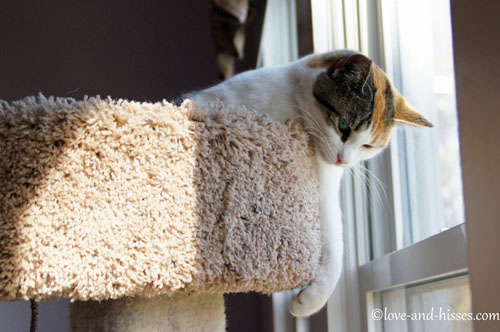 Alice double checks to make sure that her point got across. 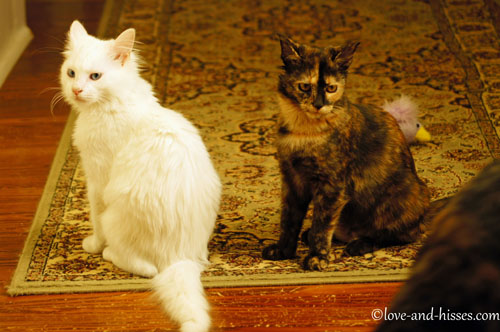 I feel like this could be a still from a detective drama on TV. Detectives Purslane and Dandelion are on the case and THEY ARE NOT PLEASED.

Are you ready for the most beautiful boy EVER? You know you are. You have TOTALLY been waiting for this all week. 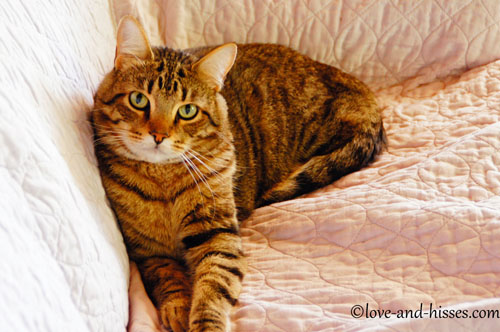 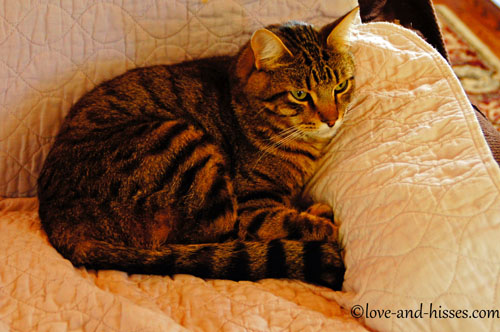 He really likes that spot on the couch. That also happens to be where I lay when we watch TV at night. Coincidence? I think NOT.