My first cat Steve used to spray/pee back when he used the litterbox. Even covered litterboxes would get disgusting and it would seep out the back. So I bought the same Rubbermaid style containers you have, cut the same hole in them (a little higher up, litterbox entry level high) and used them as litterboxes. Solved (most) of my litter problems with him.

Rubbermaid containers are just so versatile, aren’t they? Those covered litter boxes didn’t work for us either – Spanky pees higher than any cat I’ve ever seen, even at his advanced age!

As much as it would be cool for you to keep Magoo (I adore him), I think I would be mad at you! Why, you ask? Because that would mean you DID have room for one more and could have kept Stompers! So I think it’s only fair that both ‘Superstars of 2012’ (that’s what I’ve been calling them in my head, as if they were a crimefighting duo or something) find home outside Crooked Acres!

I am so thankful that Kristyn and her family fell in love with Stompers, because I don’t know how I could have ever taken him to Petsmart. Having him go right from here to his new home was awesome – I wish it could be that way for every foster!

Our insurance adjuster called for the tree on the garage. He had a thick Southern accent and I said,” I hope you don’t mind if I ask where you are from?” Alabama was the reply. He travels the country for the Insurance Company. I wondered to myself,”Is that how Fred sounds?” Were you and Fred amused by each other’s accents when you first spoke on the phone and when you met each other? You’ve lived many places and I’m sure you don’t have a super strong accent but Fred is purely Southern, isn’t he?

I think I’ve picked up a Southern accent in the 16 years I’ve lived here, but it’s not a strong one (oh, hush, it is NOT). Before that, I was most often told that I sounded like I might have come from the Midwest, and whether that’s because my mother’s from Maine and my father’s from Alabama and if you combine the two you get the Midwest OR because we moved around when I was a kid (my father was in the Air Force and retired when I was going into 6th grade), I don’t know.

Fred does have a Southern accent, but it’s a pretty slight one. He used to have a really thick accent when he was a kid, but he heard a recording of himself talking at one point, and he was horrified that he sounded like “a hick” (his words), so he trained himself to talk all proper and such.

When we were moving down here, my daughter and I stopped in the hills of Tennessee to spend the night. The hotel clerk had such a thick accent that I literally could not understand one word that came out of her mouth. I think she had to repeat herself three or four times, and I just stood there and stared at her. That was the first time I thought “Oh, dear God, I’VE MADE A TERRIBLE MISTAKE. I’m going to move to Alabama and I am not going to be able to understand ONE WORD THAT ANYONE SAYS.” The reality is that Huntsville’s a fairly urban area and there’s a large Army base here. So there are lots of people from all over the place who live here now, and though there are times when I nod and smile while thinking “Um, I do not know what you just said to me”, for the most part I don’t have a problem.

I liked Fred’s slight Southern accent immediately (though he’ll deny he has one). I’m not sure what he thought of mine; you’ll have to ask him. 🙂

Inspector Stompers not judging you on a shot glass is awesome.

I say this every year but please make sure you buy cat heating pads, not human heating pads. And especially for senior kitties, make sure you use heating pads with a temperature limit! Older kitties lose some sensitivity to heat and won’t realize they are getting too hot. I’ve had to deal with far too many burned kitties in the clinic!!! The best electric pads for kitties are the ones that don’t heat up a lot until the cat is actually on the pad, and that have a temperature limit of 102. (100 is even better but 102 is safe)

And thank you for the reminder, time to get the heated pad out for my senior kitty! 🙂

Thanks for the reminder!

My 2 kitties don’t need heating pads. I have old fashioned rads in my apt. I made shelves to fit over them and one has a small fleece blanket covering the shelf. The cats each take their fav – sometimes they share.

I wish I had old-fashioned radiators! Actually, I would have thought that our cats would spend time hanging out on top of the air vents – which are on the floor – but they don’t pay much attention to them.

How do you keep the metal wrap on the tree? Great idea for the neighborhood cats and Jack and Percy who are always waiting for the perfect opportunity to get themselves a fine looking birdie!

I had to ask Fred, and he said that he nailed it right into the tree.

What was the appraiser’s reaction to all those kitties?

He thought they were pretty cute. The funniest thing is that he asked Fred how many cats we had, “Because it looks like there are about 20 of them!”, and Fred told him that we have 10 of our own, and 8 fosters. Why did he tell the appraiser that we have 10 cats instead of 13? That is an excellent question and one Fred doesn’t have an answer for. I guess 10 is a less completely nuts number than 13?

The appraiser was AMAZED that we have so many cats in this house because, he said, “Usually you can smell it as soon as you walk in the door, but I never would have guessed!” Given that Magoo had JUST used the litter box and I was frantically spraying Nose Offense in the laundry room ten seconds before he walked in the house, that was good to hear.

I know you’ve answered this question before (at least I *think* you have) but what kind of camera do you use?

It’s a Sony SLT-A55. I use it with a 18-200mm lens most of the time, but I have a longer lens if I need it (I just hate having to switch out the lenses). I also have a smaller, simpler Sony Cybershot DSC-WX9 (obviously we’re a Sony family – I’ve never tried any other brand of digital camera, but I eyeball the Nikons from time to time). All of the pictures I took in Myrtle Beach were with the Cybershot (I was very concerned that I might drop the bigger, much more expensive camera in the sand, so I didn’t take it to MB with me), and I also use the smaller camera a lot when I first get little fosters who are prone to climb into my lap, because the bigger camera is hard to deal with when I’m trying to focus on them.

You know, looking at your shelves, and the amount and size of the kitties who use them, I’m thinking Greg is overthinking the ones we’re planning… How wide are those? Anyone ever too heavy and break them or fall down?

The “steps” in the kitchen are 12 inches wide by 7 1/2 inches deep, and the ones in the living room are 11 inches wide by 7 1/2 inches deep. We’ve never had any issues with the heavier cats (Tommy and Elwood) breaking them, they’re good, sturdy shelves. Occasionally we’ll have a kitten slip and almost fall over the side (they usually catch themselves and then hang there until we save them), but the bigger cats never have, probably because they don’t race around like their tails are on fire at the speed that the little ones do.

The corner shelf in the kitchen is 17×15 inches, and the ones in the two corners of the front room are 20×20. My only gripe about the corner shelves in the front room is that sometimes the kittens get up there and then sit RIGHT on the edge and look down like they’re going to jump (they never do) and it wrecks my nerves. I think those shelves probably could have used sides, but at some point Fred’s planning to make a walkway all the way around the front room, so I guess sides on the shelves wouldn’t really work. Maybe they need nets underneath them! (Except that if a kitten fell and landed in a net, they would probably like it.)

Robyn, have you seen this series of photos of a grandma and her odd-eyed cat in Japan? Wonderful shots!

Oh, I love those pictures so much! I had seen them, but I had to go look at them again. 🙂

A Steel Magnolias themed litter would be fun! The next time you get all girlies…

I had that theme – M’Lynn, Drum, Truvy, Clairee, and Ouiser were The Magnolias. Drum and Clairee were adopted together and then returned about a year later. They came here for a couple of days and then went to Petsmart, where they were adopted a few days later – together. (There are more pictures of them here. They grew up to be so gorgeous – and Clairee’s eyes are absolutely stunning!)

Today’s video is entitled “Corbie and the raccoon”, but rest assured that Corbie was inside the house on a Ham-mick near the door, and the raccoon was outside on the side porch eating out of the food dish. That raccoon seemed to have no idea we were there, or he just didn’t care because the cat food was so good. 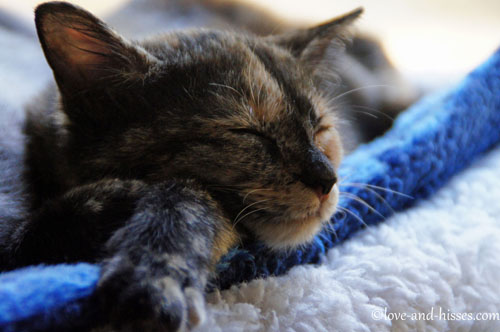 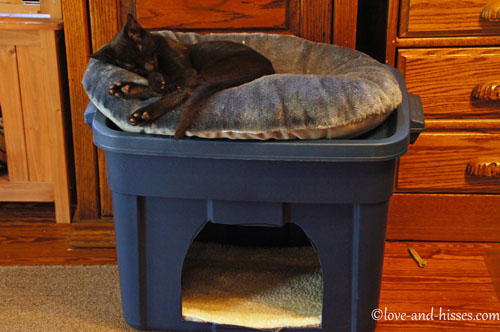 Magoo thinks that bed is THE BOMB. 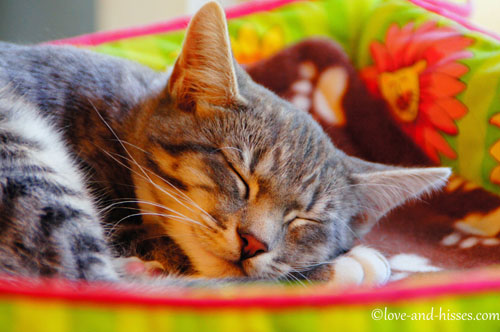 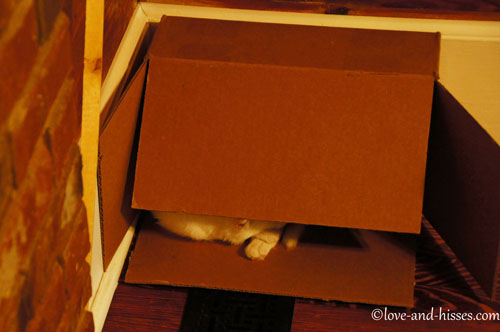 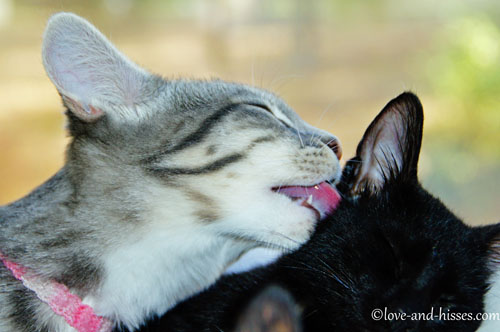 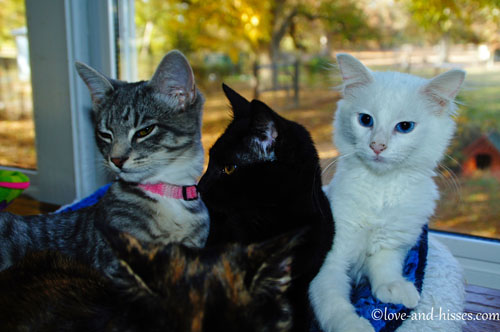 All the girl fosters in one bed. 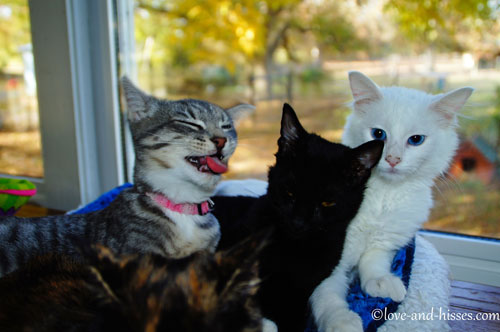 I do not know WHAT Polly was licking or trying to lick, but this cracks me up. 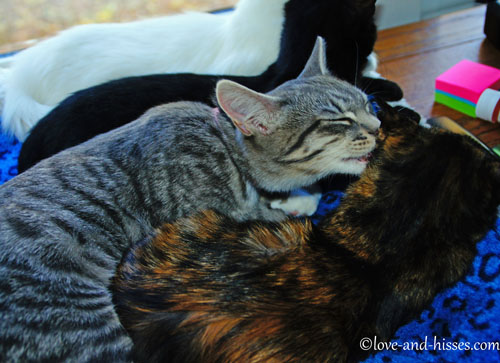 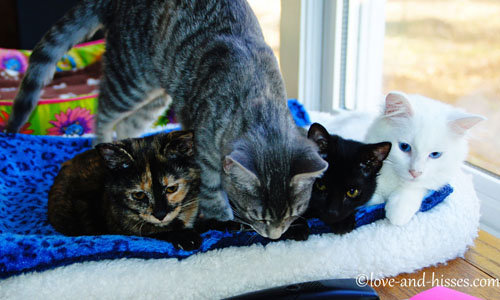 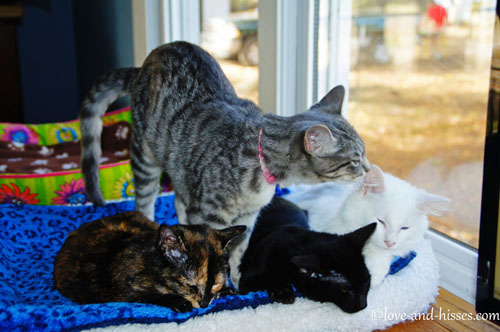 I’m about to head out of here with Percy, Petey, Joe, and Magoo, to drop them off at Petsmart. I’ve got more pictures of all of them, which I’ll share next week, along with pictures of the ‘Maters. Wouldn’t it be awesome if AT LEAST two Pickles were adopted this weekend? Oh, I hope so much that that happens – though of course if ALL of them were adopted this weekend, I wouldn’t complain. (The sidebar is nowhere near updated, but I hope to get to that this weekend.)

I will, of course, let y’all know if/when adoptions happen. 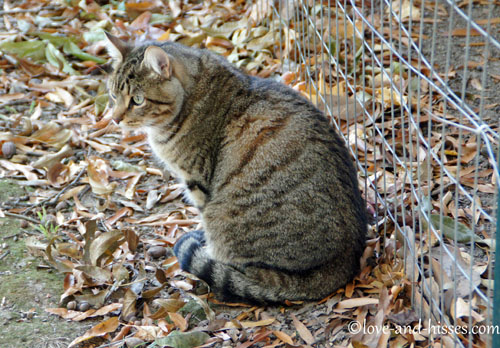 Corbie, sitting by the fence and looking in a judgmental manner at another cat. Probably Kara, who was likely glaring judgmentally back at him. 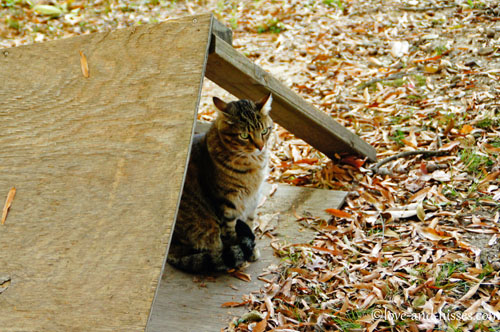 His favorite place to sit in the back yard. I’m trying to convince Fred to make something less ugly for His Majesty Da Corbs, but Fred doesn’t seem too inclined to rush right out and do it.