Just thought I’d pass on this warning. Seems there’s something like this every month or two *sigh*

I don’t see the Melfistache. You mean she has a bit of the kitler look because of the black nose?

No, it’s a very thin line right above her upper lip, kind of a pencil ‘stache. Here’s a closeup with some arrows pointing to it. I’m wondering if you’re friends with Oliver Donovan and Em Mette on Facebook. They’re so darn cute, and I think you would like the way they talk. Just something you might look up. 🙂

I am friends with them on Facebook and I also follow the official Oliver Donovan FB page. They don’t post often enough to suit me, but when they do, I love it!

I have followed your posts for several years, but kept quiet. I have a question, though. I have an elderly cat (~18 yo) who is slowly having issues. I tried giving him Liqui-Tinic, but the biggest response was from his younger brother who liked to lick the dribble off of his chin. Since Marlowe (Phillip Marlowe, that is, he was quite a detective in his youth; his bio brother (RIP) was Sam Spade) is anemic, I moved on to trying liver. However, the liver was not a hit (both cats love to eat something I eat, but since I don’t eat liver…) Any tips on getting liver to appeal to cats?

I don’t have any suggestions here (well – maybe try mixing it with chicken baby food?), but hopefully someone out there will have suggestions for you! By the way, those are great kitty names. 🙂

Is Newt as wide as he appears in that picture? Wow! lol 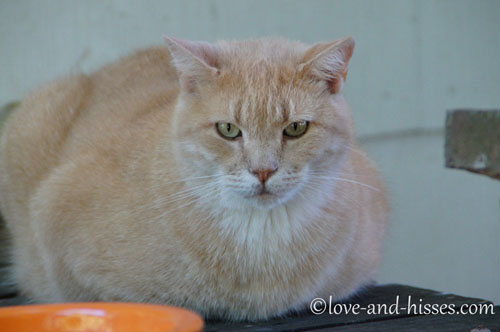 Newt is a big boy – though I should add that he looks a lot less wide when he’s up and walking around. When he settles down into meatloaf position, he kind of… spreads out! No one tell him I’ve been posting unflattering pictures of him on the internet, please.

Okay, I am probably late to this idea but Tony with the stripes …did you purposely name him that in reference to Tony Soprano and Tony the Tiger?

I’ve had several people ask if his name was Tony because of Tony the Tiger, but once I had the list of names, I assigned them completely randomly. He certainly does have some delightful tiger-like stripes, doesn’t he?

Totally off-topic, but I’ve said before – you guys are the only cat people I “know.” Anybody found a reliable programmable feeder that your cat can’t break into? Earl busted into a flip-top feeder in minutes and probably wouldn’t take long to learn how to rotate the dish in the round feeders. This is also for Pumpkin, the weirdo twice-spayed orange female who goes into heat. Thanks!

I know nothin’ about automatic feeders; anyone out there have a good suggestion? Please share!

My secret is that I am SURE just off-camera in about 99% of the pictures I post, there’s more than likely a cat-fur dust bunny the size of Wisconsin. They tend to migrate to the corners of the rooms (and under furniture), so it might LOOK like my house is spotless, but believe you me, nothing could be further from the truth!

My little ragamuffin is 8 weeks now and still catching up on his growth – he loves his wet food but appears not to know how to eat kibble or drink water. Do I need to do anything about this or will he figure it out? Put a teaspoonful of KMR in his water dish?

I wouldn’t be too worried about him not drinking water – as long as it’s available to him, he’ll figure it out eventually. He’s getting the water he needs from the canned food. You can try sprinkling the dry food over the canned food, that might get him interested in the kibble.

What I want to know is what is that tray thing you have the litterbox (picture with Mz Poo) sitting on and where did you get it???? 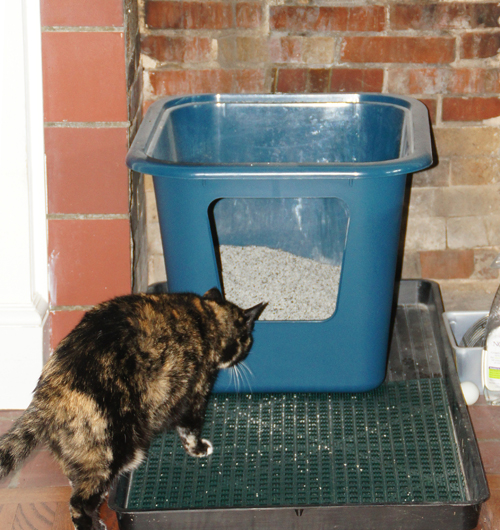 That is a jumbo boot tray with Dri-Dek tiles sitting inside it. I use the jumbo boot trays (which I got from Gardeners.com, here’s the link to them) for the litter boxes in the front room, the upstairs bathroom, and in the foster room. It helps to contain some of the litter. I only have the Dri-Dek tiles in the one boot tray, because I was trying them out. The litter is supposed to fall through the holes rather than get scattered on the floor, but it doesn’t really do that, unfortunately. I got the Dri-Dek tiles (which are a softish plastic, and which you can trim to fit the space you want to put them in) at Jeffers, but I’ve also seen them at Revival Animal – you may be able to find them even cheaper elsewhere; I just got them from Jeffers because I saw them in the catalog and thought they’d be worth a try.

Do you have any over-kneaders in your adult cats? Both of our boys knead like crazy. Two different breeds, ages, and upbringings. Just wondered. Peanut likes to knead people, and Zombie goes crazy on our bed. Oh, and Peanut drools like crazy when getting ear scratches. Then he shakes his head like a wet dog, and sprays me with cat spit. Gah. Every male in this house is annoying like that!

Tommy will knead and knead and knead some more. I call it his “long march to nowhere.” His preferred kneading position is a half-sitting position, and he prefers to knead on a soft pillow or blanket, with the occasional knead on an exposed arm or leg, usually when you’re not expecting it, and when it’s been a long time since his claws were last trimmed, for maximum pain. He is SO HAPPY when he’s sitting there kneading that his eyes go completely blank. I have a picture somewhere of Tommy kneading and Alice giving him the DIRTIEST look like she thinks he’s lost his mind. He’s the only power kneader in the house, though, which is kind of surprising given the number of cats we’ve got, isn’t it?

I thought of all your Momma cats when I saw this picture. 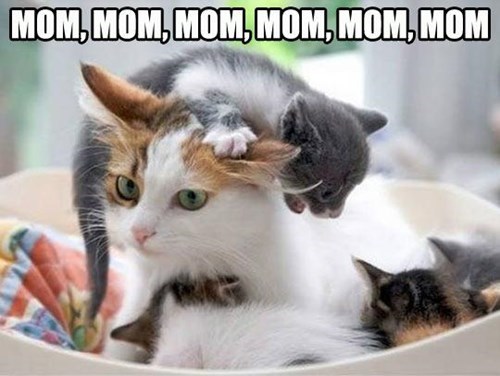 The Mommas are all singing “Calgon take me away !!”

Poor Momma kitties – they certainly put up with a lot, don’t they?

Every single time I read Paulie Walnuts it comes out “Paulie Wallies” and then “Wallie Peanuts” (which I recall someone else saying before.) There has never been a single time I’ve read it properly the first or second time. My brain must move too fast over the words. You’d think by now I’d have it!

Hey, you’d think I would have it by now. I keep calling him “Paulie Peanuts!”

Btw Chewy.com has a litter sale going on. I have no idea what is a ‘good price’ on some of the products but I know I’ve heard some of ’em mentioned here. I know they have some of the best food prices.

Yes, they have the Dr. Elsey’s Precious Cat 40lb bags for $11.24! Free shipping over $49. I had already ordered food, then noticed the litter sale after I hit checkout. Called them up, and they kindly added the litter to my order. This will be my first time with Precious Cat, and I’m hoping it lives up to the good recommendations. Have always gone with ScoopAway, because while it’s as dusty as Kansas in the 1930’s, it is the best for not having urine stink. I now don’t live near a PetSmart, which is where I would get the 42lb bags (the 35lb boxes drive me crazy–two boxes in another box, and you can hear all that litter shaking between the cardboard layers when it’s empty). Costco was carrying it, and just stopped (a month after I joined Costco, thanks Costco…). I tried Costco’s house brand. Super cheap, and way dustier than ScoopAway, which I didn’t think was possible. I’ll never buy it again. Just picking up a clump sent clouds of dust wafting everywhere.

The Costco brand sounds like the Fresh Step litter that Sam’s Club carries now. It’s crazy, the amount of dust that litter puts out, isn’t it?

I hope the Precious Cat works for you! I’ve been using it for a few weeks now (was using Cat Attract before that, but WOW that stuff is expensive) and it seems to be going pretty well. I added activated charcoal to all the litter boxes, but someone mentioned that they add a little Fresh Step to their litter boxes full of Precious Cat, and the Fresh Step helps with the odor control. I may go to that, because while the activated charcoal does a good job, it tends to turn white paws dark, so the white-pawed cats and kittens walk around looking like they have FEEELTHY paws, when it’s actually just the dust from the charcoal.

At one point in the past, maybe last year, I actually was using Fresh Step as a “booster” for Precious Cat already, and I have zero idea why I stopped doing that. I think I switched back to Fresh Step for some reason?

Also, I really like Chewy.com. I get my cat food from there on a regular delivery schedule, and I’ve been ordering my litter from there, too. The delivery guy knows that the heavy boxes are litter, and will put them by the garage for me (I put the litter into old Fresh Step buckets. That makes it easier to stack them for storage, and also to carry from the garage to the house.)

Adriana and the hook…it always amazed me what my kittens could find that horrified me when I thought about the potential consequences! Of course nothing topped when either Sabrina or Samantha (can’t remember who now) got her head trapped between the posts on bed’s headboard. Thankfully I was home and heard her terrified yowls, not to mention her mom Tabatha’s, and got there before she hung herself!! After that, I had pillows stuck between every post on that bed…Actually, I think I finally removed the last small pillow just recently – almost a year and a half after the fact!

Kittens really have a skill for finding the things you’d never EVER imagine to be a threat, don’t they? I swear, one day they’re going to scare me right into a heart attack! Inspector Silvio examines the night light to make sure it’s up to code. I wonder if he accepts bribes? Oh, Tony. You make me want to kiss your little face all day long. Mama Livia, on cleaning duty. But then, she can’t help herself… She huffs that kitten belly. “My name is Livia, I’m a kitten-belly-huffer, and I’m not ashamed to admit it!” “The backs of their necks are pretty huffable, too.” Snack time for the Sopranos. Livia, Tony, Adriana, and Carmela are usually the first to show up. Then come Tony and Silvio. And finally Meadow and Melfi mosey up to grab a few bites.