The ‘Maters (so called because they’re all named after varieties of tomatoes) came to us on June 14, 2012. They were abandoned at a local business, which is how they came to us. They are five boys (two orange tabbies, two black, and one black with white) The boys’ estimated date of birth is 5/10/12, and Brandywine – Mama – is estimated to be about two years old.

They are talkative little hellions who love their mother beyond all reason and will harass her until she lets them nurse. Brandywine is an extremely sweet, laid-back, friendly girl who will let those kittens follow her around and try to nurse 24/7 (she’s currently getting a break every day in another room where she can relax without harassment!) You can read about these kittens and their mama beginning here (there are links at the bottom of each entry; click on the one on the right to take you to the next one). You can see all the pictures taken of this bunch over at Flickr, here or scroll through them at the bottom of this page.

The ‘Maters all went to Petsmart on August 18, 2012, hopefully to be adopted very quickly!

Brandywine was adopted the DAY they went to Petsmart, August 18th!

Caspian was adopted on September 1!

Wellington was adopted on September 25th!

After they’d been at Petsmart for quite a while, we decided it was time to give Dingwall Scotty, Mr. Stripey, and Sungold a break from the cage. So on November 16, 2012, they came back here for some rest, relaxation, and lots of love. We’ll give them a few weeks’ vacation, and then they’ll go back to Petsmart for another try at hooking up with their forever families.

Update: On January 12th, 2012, Sungold and Mr. Stripey went to their forever home with Lynn! Reports a few days later indicate that things are going well, and the boys are just as sweet as can be.

Update: Though things were going well in Sungold and Mr. Stripey’s new home for the first few months, as they grew older they teamed up and began bullying the elderly cats in their home. Lynn tried many ways to deal with the situation, but ultimately they needed to be returned to the shelter. As of now (3/24/14), they’re still at the shelter, in the cat room, and doing very well.

Update: In late October 2014, Sungold passed away unexpectedly in the cat room at the shelter. Mr. Stripey remains at the shelter, available for adoption.

Update: In late April 2015, Mr. Stripey was adopted by Kathy, who adopted Reacher way back in early 2011!

Update: Wellington was returned in May 2018 and is currently residing at the Challenger’s House shelter. 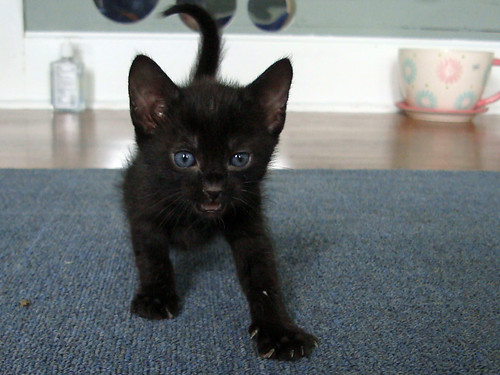