Question… how do you clean your cat trees? I have never tried to clean mine, other than occasionally wiping the mounds of cat hair off.

I have a vacuum cleaner attachment with a roller on it that I use on all the cat trees. Sometimes I run a Furminator brush around to loosen up the fur if it’s been a while, but the vacuum attachment does a pretty good job. If there are any of those strings hanging off (you know how they sharpen their claws and sometimes the pieces of carpet fall off and leave those strings behind? I’m sure there’s a better name for them than strings, but I’m sure you know what I mean), I’ll trim them and toss them in the trash. If they barf on the cat tree (YOU KNOW THEY DO), I clean up the barf and use spray cleaner to clean the spot. (Okay. SOMETIMES I use spray cleaner to clean the spot. Sometimes I’m lazy.)

The only thing different I do for the trees in the foster room is that I vacuum them, spray them with Rescue spray, let them dry, and then vacuum again. I figure while I’m spraying Rescue on all the other surfaces in the room, I might as well do the trees just to be safe.

I see Tony Rocky Horror Pickle, but didn’t think of Beulah. I can totally see it, though!

Are adoptions up at Forgotten Felines this year like at so many other places?

Adoptions are great – they’re definitely up this year!

Someone else may already brought his up, but is it just me, or does D’Artagnan have extra long legs?

He has longish legs, but they’re also skinny, which makes them look longer.

I don’t recall what environment Alexandra and her kittens were in before coming to you but do you suppose she felt there would be danger to the kittens if they made the kind of scent marks that obviously happen in litterboxes? Like, she trusted herself to sufficiently cover but felt that the kittens would be putting themselves at risk to predators?

I suppose anything is possible, but the behavior wasn’t happening during the week and a half before she went to Michelle’s, so I’m not sure what triggered it when she returned. Also, she was using the litter box just fine on her own the whole time and didn’t seem stressed at all, so I’m just not sure what was going on there.

Is Planchet settling in amongst the other kittens more by now? I hope he’s doing OK. He’s a beauty! I’m always partial to gray kitties.

Planchet is 100% integrated with the other kittens – he’s often sleeping near them, he plays with them all the time (especially with Winter and Aramis), and he’s really sweet with Constance and Rochefort. He sure would like to get OUT of the foster room, though – every time I walk in, he races over to the door in an attempt to see what’s on the other side. Yesterday he made it through the door, stopped, then turned around and ran back in. He cracks me up.

Aramis is also quite a bit bigger than Constance and Rochefort. Rochefort has more caramel coloring than Constance. And Constance’s belly is white – here it is: This isn’t a full-belly shot of Rochefort, but you can see the spots on his belly: 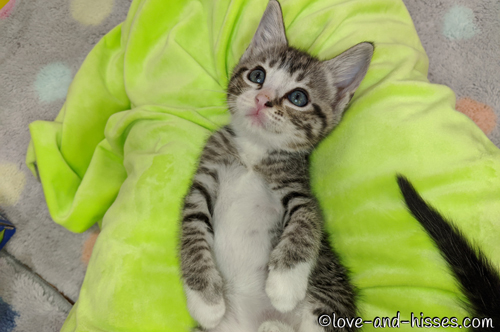 I love how d’Artagnan has two white hairs over each eye, like eyebrows. Oh Constance. Why so CUTE? Rochefort would have you know that d’Artagnan makes an excellent pillow. And Planchet makes an excellent playmate. Constance, I bet if you got more of that food in your mouth instead of UNDER your mouth, you’d have hit the 1 pound mark by now. Constance in the scratcher chewing on the cardboard while Planchet plays with her tail. A put that rug down and the sun came through the window, and the kittens though it was an excellent place to hang out. Porthos is all “I ain’t going on that rug, lady. I prefer the FLOOR.” 5 of the 8! Winter up by the window, Aramis and d’Artagnan stuffed in the cubby part of the tree, and Porthos and Athos on the platform. Little posers d’Artagnan and Aramis. “Just SMILE so she’ll take the picture and go away!” Jake in his house in the back yard. He sure does love to hang out there in the afternoon.