So when the wee McMaos curl up in your lap, do you stay there, or do you eventually have to move? Because I always feel so guilty I end up sitting still until something goes numb.

I can sit for a pretty long time with my legs crossed, but yeah, eventually one leg goes to sleep and I have to move around. They’re pretty forgiving, but occasionally they look up at me and give me the sad little heartbroken meow, and I want to throw myself out the window for daring to disturb their rest. 🙂

Good luck Rufus! Did he ever take a “non-cute” picture? Whoever adopts him will be very lucky; I think he’s a special kitty. And I trust your judgment Miz Robyn; I know I couldn’t do what you do. I would keep every kitty. BUT you have encouraged me. I am going to foster two cats this summer!

I don’t believe Rufus ever took a bad picture, no. And YAY! The world can always use another awesome foster parent!

Those kittens are cute enough to eat! so scoop up-able and kissable and squishable – aaww…!!! Are they eating solid food on their own now?

Indeed they are. In fact, they now know what the sound of a cat food tin opening means, and they cluster around my feet and howl at me. For a while I was giving them all canned food just about every time I went into the room, but that had to stop and now they get canned food (mixed with baby food – which I guess I can stop doing any time now, too. But they love it so much!) in the morning and evening, and have kibble available the rest of the day. The only kitten who isn’t interested in canned food (weirdo) is Finnegan, and so when everyone else is bellied up to the plates, he just follows me around and supervises what I’m doing.

I dreamt about the McMaos last night… At one point I had Declan and another baby, and was walking them on leashes. Clearly, I am obsessed with the babies.

I would like to see what Declan would do if I put a leash on him!

*pets Rufus* Good luck to you, pretty boy! May a forever home with a fondness for soft, snuggle-able kitties turn up in a hurry. What color is he, anyway? I’m not sure I ever knew.

Rufus is a medium-hair gray tabby with white. Also, he’s SO PRETTY that I expect he’s going to find a home soon. I hope so, anyway!

I’d like to hear more about the Pouty Princess and what she does to make herself seem pouty. I’ve thought all that she’s the most beautiful of this litter and to hear about her personality would be awesome!

The Pouty Princess is actually not all that pouty. She’s a little bit of a drama queen – she was always the hissiest of the bunch, and if you pick her up and she doesn’t WANT to be picked up, she will cry like a sad little princess. But she’s a sweet girl, and she was actually the VERY FIRST baby McMao to purr for me. That just happened a few days ago! Oh sure, they purr like mad for their mama, but for me they had nothin’. But then earlier this week I picked up Ciara and petted her, and she thought about it for a moment and then began purring softly. Then the next day Finnegan did it!

There’s nothing sweeter than a purring kitten.

Ciara also loves her mother with a passion, and can often be found giving her mama a look o’ love. She will happily play fight with her brothers, and she gives as good as she gets. She’s not much of a climber, but she’ll climb every now and then when the mood strikes her. And her favorite toy is the Kong Kickeroo – she very well might be taking after her mother, who always did like a good sniff of the catnip-containing Kickeroo.

The photo of Alice on top of the cabinets reminded me of my favorite tumblr. Check it out, if you haven’t seen it already- it’s called Get out of there cat and features photos of cats in all sorts of crazy places, and typical places, like boxes and on top of doors. 🙂

I’ve seen that site several times this week and kept meaning to link to it, so thanks for the reminder! It cracks me UP.

We’ve been giving Miss Dorothy limited time out of the guest bedroom to explore and meet the other cats. She thinks it’s pretty neat to have all that room to run. 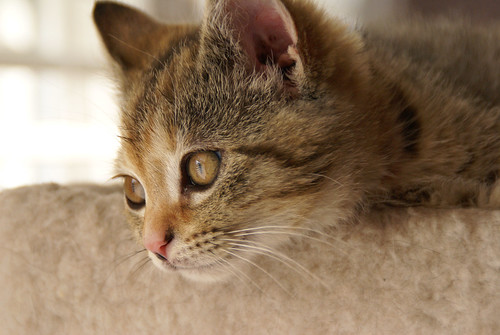 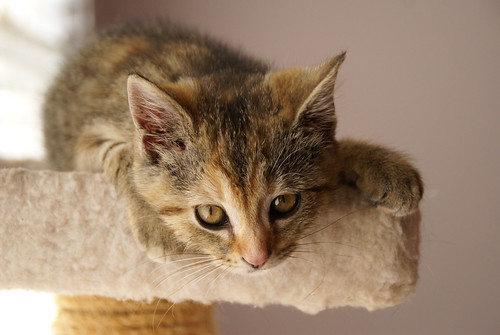 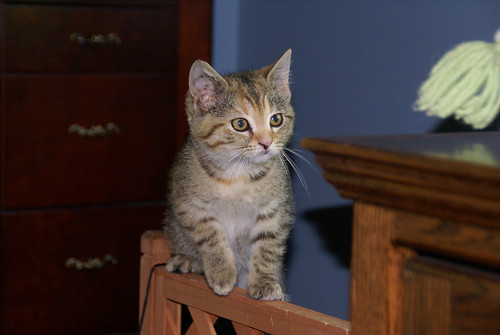 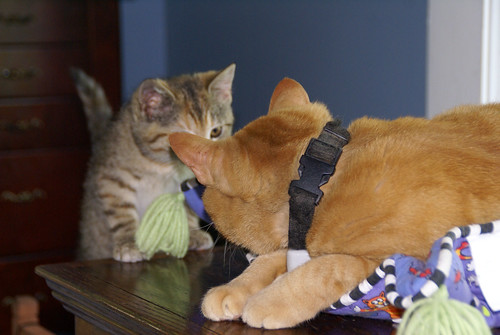 Sugarbutt did not care for this tiny little girlkitty getting all up in his grill, and a moment after I snapped the picture, he smacked her. She wasn’t too perturbed by that, and just ran past him. 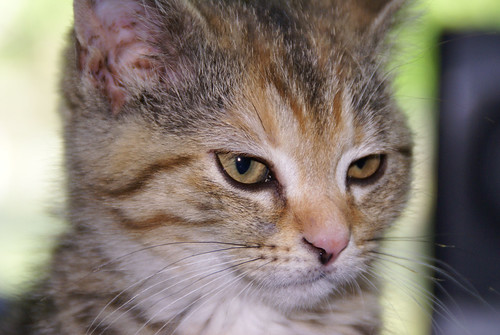 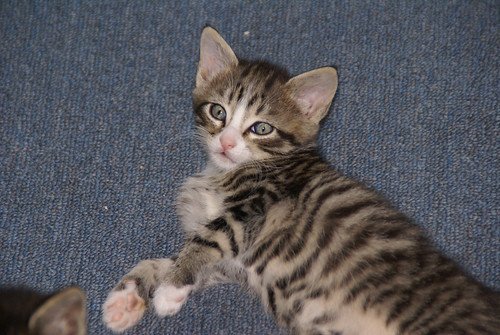 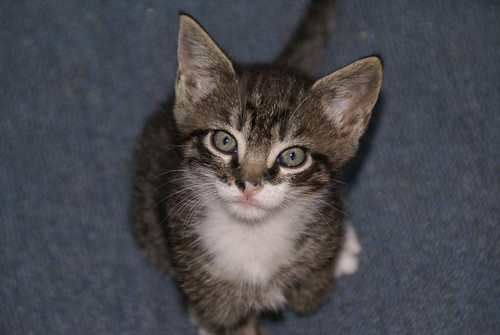 Declan. How did they get so grown up?! He doesn’t even have any blue left in his eyes! 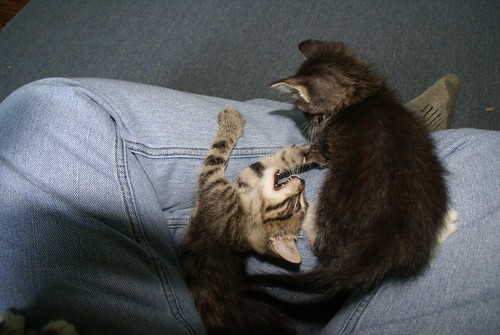 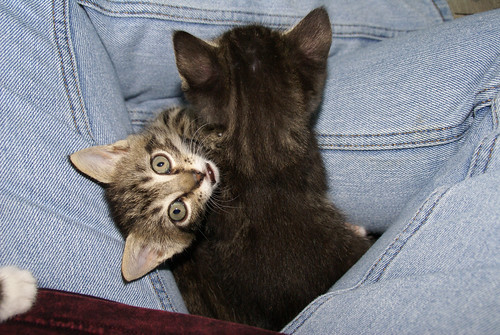 “That didn’t quite work out the way I’d intended.” 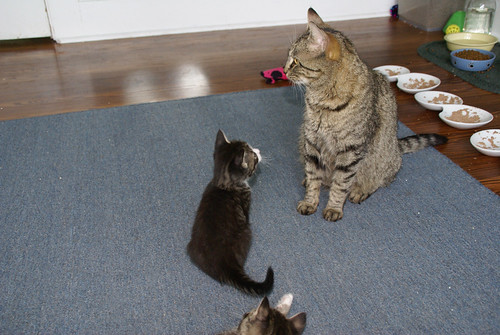 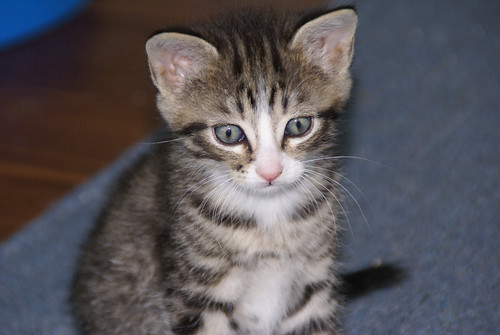 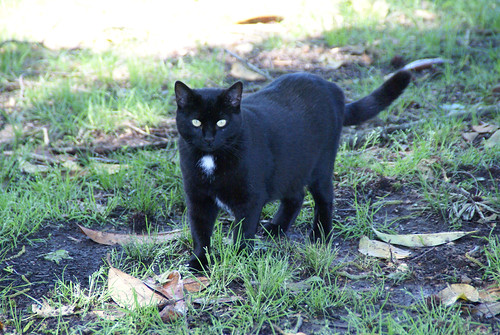