I had to get groceries yesterday because I didn’t go Sunday ’cause (1) I didn’t wanna and (2) there was nothing we desperately needed right away. So before I left, I gave Kara her morning snack and then had to refill the water bowls. Every time I cracked the foster kitty room to look into the hallway, Mister Boogers was far too close to the door for my comfort, so I’d shoot the air at him and he’d run off.

Here’s a hint: Mister Boogers? Not the man. He got his butt kicked six ways to Sunday. Kara was on him immediately, and she flung him around the room. He was screaming, she was screaming, I tossed the bowl of water in the air and started screaming. I yelled “No! No! NOOO!” at the top of my lungs (why do I bother? It never works!), waded into the fray, and grabbed Kara. Once she stopped kicking his butt, Mister Boogers FLEW out the door, and I was able to get the door shut.

The kittens were TERRIFIED. Two of them flew into their teepee and hid at the very back. The other two were on the side of the teepee and just sat there, frozen. Once the door was shut, I soothed Kara (who basically said “That’s what I THOUGHT you’d say! I bet you won’t be sniffing under the door again ANY TIME SOON!” and went back to eating) and then picked each kitten up and petted him/ her until they stopped shaking. 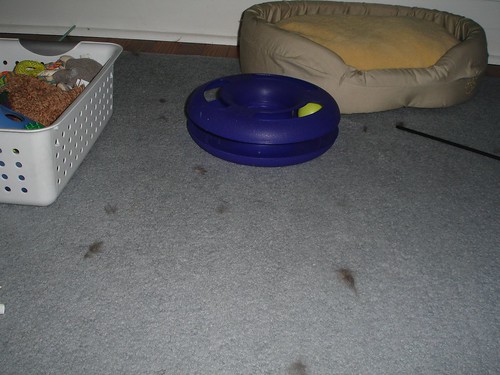 The Booger fur left behind.

Once I was sure Kara and the babies were fine (the kittens, once soothed, went over to the amazing amount of gray Booger hair left behind in the fracas and sniffed at it), I went and found Mister Boogers, who was flopped at the bottom of the stairs, cleaning himself. He was perfectly fine, didn’t look the least disturbed, but I’ll note that I didn’t see him upstairs again the entire day.

Inara has used the litter box several times. I haven’t seen anyone else use the litter box, but that doesn’t mean they haven’t, just that they didn’t put on a show for me. River and Kaylee like to get into the litter box and eat the litter, I don’t know why that is. I thought maybe it meant that they were ready to eat cat food, but when I put them in front of the dish of food, they look up at me like “Your point is…?” and wander off.

I did see Kaylee sniff the bowl of water, then lick the water off her nose and then sniff and lick again, so maybe she’s getting ready to try cat food. Who knows?

They’re growing up too fast! I want them to stay little forever!

Now when I go into the foster kitty room and sit down, River comes out of the teepee and climbs up into my lap and lets me pet him. Inara and Zoe eventually make their way over to me, as well. I sit Indian style (or whatever the politically correct term is these days), and they like to slide down into my lap and be petted and kick and bite at me. Yesterday, after a rousing game of kick-and-bite, Inara fell asleep laying on her back. These kittens are way too damn cute. 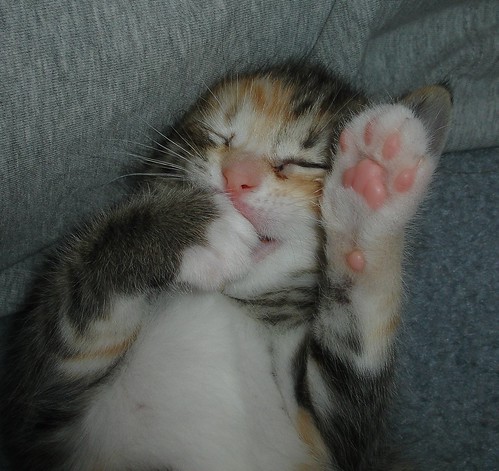 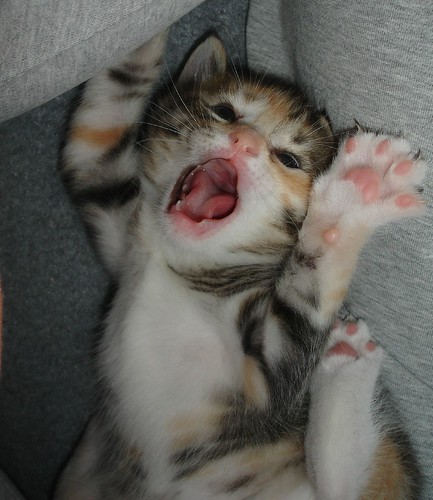 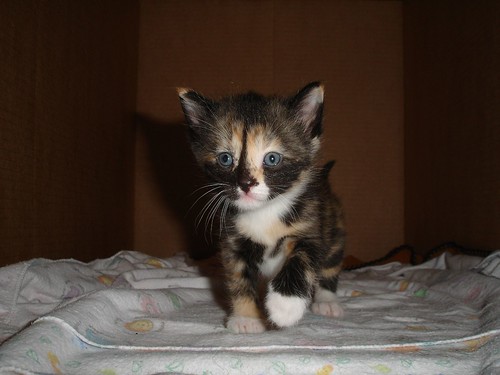