Edited to add: I heard from Calsifer – sadly, Bam Bam passed away a few hours ago. If you have any suggestions, still feel free to share in the comments, it could help someone who might be dealing with the same issues, now or in the future.

Y’all, I got this email from Calsifer, of the Tipped Ear Clan. Please read the email and if you have suggestions, either leave them in the comments or, if you prefer, email them to me (mizrobyn (at) gmail (dot) com) and I’ll pass your email along. Even if you don’t have any suggestions, good thoughts in Bam Bam’s direction can never hurt – and make sure you check out the pictures below of Bam Bam and his late brother, Teddy.

I am writing to ask for advice for our old black and white boy, Bam Bam, who will be 16 if he survives the year. I feel the experienced among your readers may have a better idea of what he needs if his history is sketched. So here goes: Bam Bam is a DSH who decided along with his brother Teddy that our home was theirs. They showed up when they were about 2-3 month-ish. Teddy died in Dec 2010 of massive heart attack.

Bam Bam is a chronic renal failure cat. His first suspected failure happened when he was about 3. Suspected due to circumstances making it seemed like he may have eaten something he shouldn’t, there was no clear indication of kidney issues then. The suspected bit got slapped on when he really crashed when he got to age 7 and we were reciting his history for the vet. He always just needed meds after that, and was keeping to his smackdown routines on everyone else just fine. After Teddy’s heart attack, the vets added monitoring of his heart condition to the laundry list of things to be done when he goes for his reviews. Things were … normal and we thought it would cruise-mode for a while yet. That is until last May, when his kidneys had a total shutdown suddenly.

The vets performed a miracle and got them to restart after 2 days. Since then he has been on a plethora of medicines and twice daily sub-Q injections. Also, since then his kidneys have crashed 4 times, but no total shutdowns. Each time he was able to come back. The Bamster has a WILL to live. The only odd thing is he eats only kibbles, and can’t retain weight. So we supplemented that with daily wetfood feedings ala squirt it mushed up into his mouth. He doesn’t struggle and will eat it that way, just not on his own. He crashed again this Thursday/Friday past. Right now, he is at home, discharged after the vets got his potassium down to normal (the readings were so high when they first saw him, the machine could only register it as 10+).

This time his heart and his kidneys are not the main problems. They are “normal” for him. But the difference with this crash was he was losing use of his limbs, as if he was drunk. He couldn’t stand up straight. He still can’t use his limbs properly. Right now, he is flopped down on his side at home. He can however sit up, after a lot of struggling. And he can lift and hold his head up with no problems. He can turn it fine too. But his front paws are like floppy furtoys that he can’t get to obey him. His hind paws too. He is not able to stand up on them. At first it was his front paws that seemed to be weaker but now it seemed like his hind paws are worse. Through it all and even now, his eyes are bright and he insists on trying to get to the litterbox to pee. We’ve rigged things up so that he can move himself easily into his new useless-limb friendly litterbox. But he still doesn’t get there in time and we can see he’s not happy about making a mess just cos he can’t reach the litterbox in time. We’d assist but it’s a private thing for him and he doesn’t try to go if anyone’s watching him.

Here’s the crux: have you or your readers come across such a case, and what was done to help the kitty get use of his limbs back or even just to make him comfortable? Even if Bam Bam doesn’t regain full proper use of his limbs that’s ok. We just want him to be comfortable and live in dignity for as however long that is going to be. If he can use the litterbin as he so desperately wants to, that’ll be a bonus. Right now, we’re doing massages, providing heatpacks. He is due for a review in 2 days with his vet, and she has mentioned that acupuncture may be a consideration. She has added Nutripet to his medicine kit, and checking out if Liqui-Tinic (go Spanky!) is suitable for him.

In case you wonder, we already have, variously, given him the “talk” about the rainbow bridge, hopefully in a way that tells him: “if you’re not done, we’re gonna support all the way, but if you think it’s enough and you want to wait for us over on the other side, its fine too. No rush, no pressure, just all up to you.” But he doesn’t seem to be ready to go yet so we’re doing what we can. 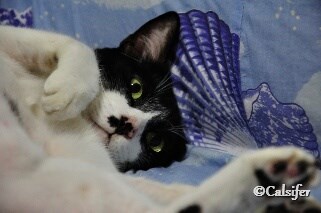 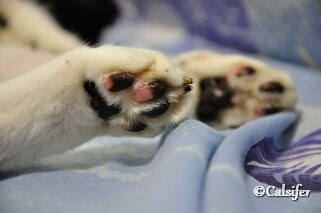 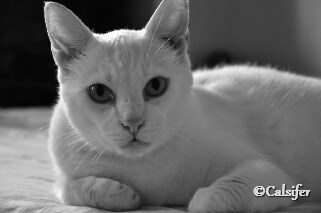 Regarding Liqui-Tinic, Fred gives it to Spanky via an oral syringe. For those with cats who would fight having liquid squirted down their throat, maybe try it mixed in Gerber baby food, chicken flavor? (When I asked Fred if he had any suggestions, he said “Grab them firmly by the nape of the neck and shoot it in their mouth”, which I know is SO helpful.)

I don’t have any suggestions beyond that – maybe someone else does? If you have suggestions on this topic, please jump in!

Also, I did just think of this – maybe Connie’s method of pilling a cat would work for giving them liquid meds from a syringe/ dropper as well?

Edited to add: Jacquie suggested this: CatDad, one thing you might try if Stormy likes treats is to put some drops of the Liqui-trinic on the treats. That is how I started my cat because she was chary of it at first, but would be unable to resist the treats even if they were a bit wet. I was able to progress to using the dropper after a week. (Thanks, Jacquie!)

Regarding Buttercup: someone asked if they were remembering correctly that one of Maxi’s kittens was named Buttercup. Her name was actually Princess Buttercup, which meant that I could still go ahead and use “Buttercup” without the title, with no conflicts in the shelter records. 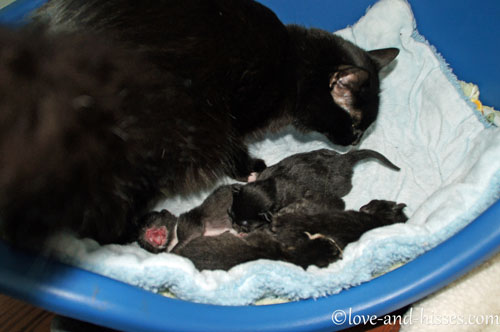 “MAMA I AM STARVING WHERE ARE YOUUUUUUUUU?!” 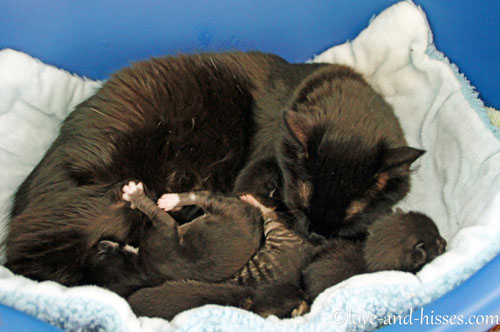 It’s funny that they seem so huge to me when they don’t even weigh a pound, but good LORD, look at those huge babies! 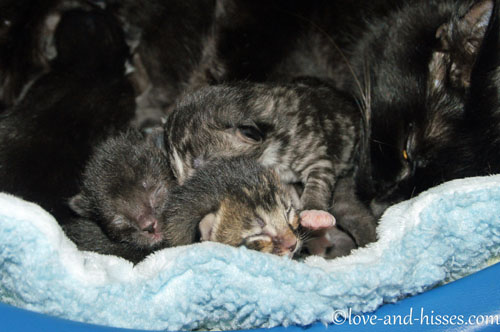 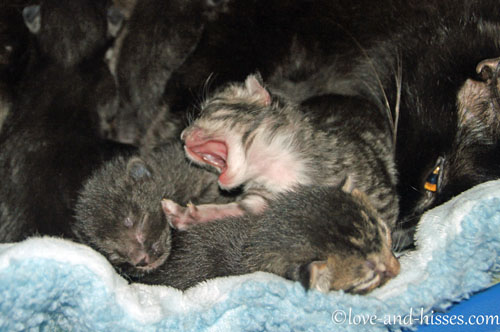 I feel like maybe Leia’s got a sleep disorder or something. That kitten is forever yawning. 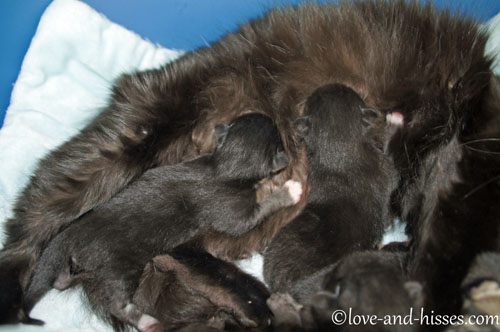 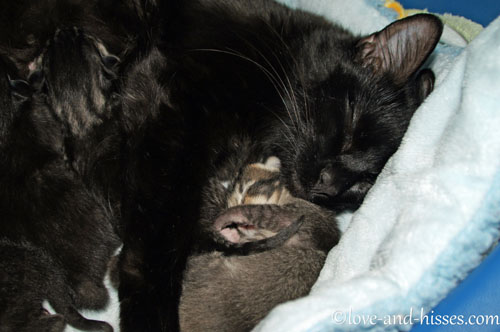 Sophie asked in the comments yesterday if one of the tabbies is a ticked tabby (no stripes on the body, just the legs and tail), and Aslan very well might be. 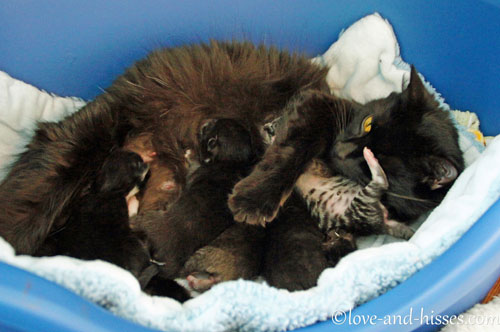 What I love about them at this age (aside from EVERYTHING) is how when you touch them, they kick their little legs at you. 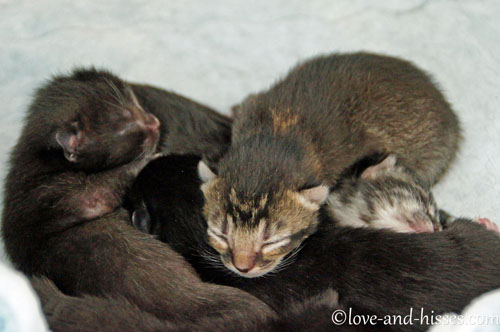 Here’s another shot of Aslan’s body – you can see he has no stripes on his body. I actually didn’t know ’til Sophie’s comment that that was called a ticked tabby. You learn something new all the time, right? 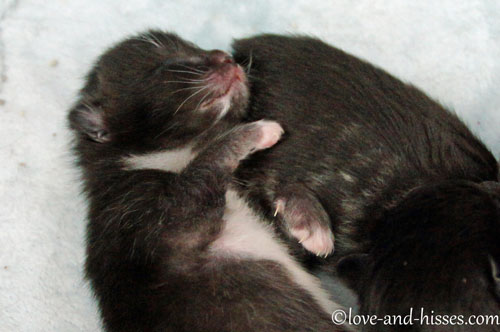 Buttercup has a stripe of white going down the side of her chin to her throat. It looks like she’s dribbling milk down her chin! 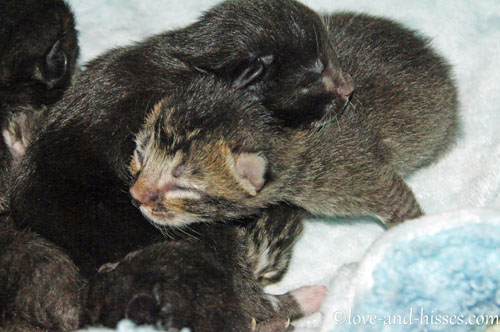 Another shot of Aslan. 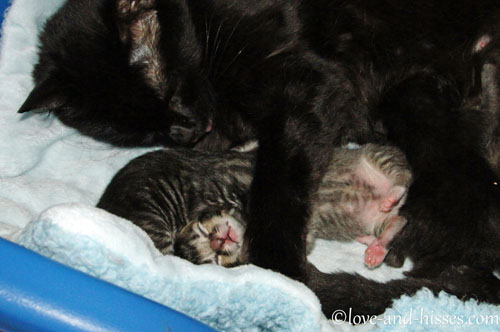 Oh, wait. He looks to have stripes on his belly – does that still qualify him for being a ticked tabby? 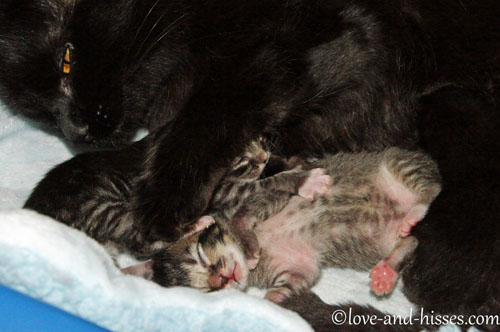 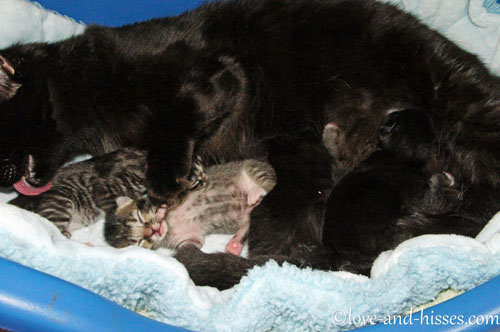 And, a video! 6 days old, rolling around, squirming, nursing, and being cleaned by Kate. Could they BE any cuter? 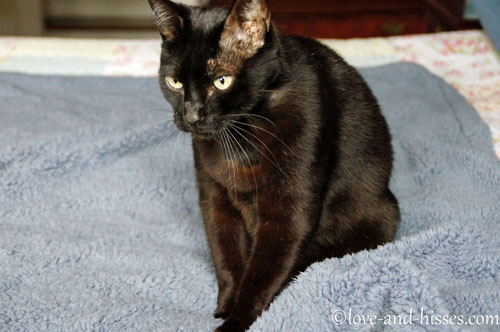 I put this blanket on my bed the other night because I was cold, and left it there because the cats love it so much. Tommy looks like he’s staring off into the distance having Deep Thoughts, but in actuality he was marching, marching, marching. 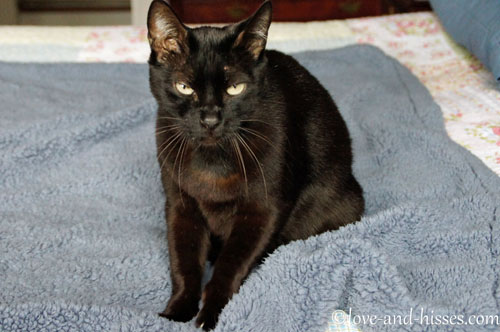 Previously
2012: For future reference (although I’m sure I’ll never remember this), it’s apparently at the 3 1/2 week mark when the kittens lose their fear and start seriously venturing forth from their safe place.
2011: No entry.
2010: I don’t know what the number is that determines crazy cat lady-hood, but I’ve got to say that two can’t possibly be the number. That’s hardly even cat PERSON level, right there.
2009: Beulah thinks this is the MOST FUN EVER, and she crawls up on the back of my leg and hangs on for the ride.
2008: No entry.
2007: I ain’t cleaning the frickin’ floors in this house ever again
2006: No entry.
2005: No entry.