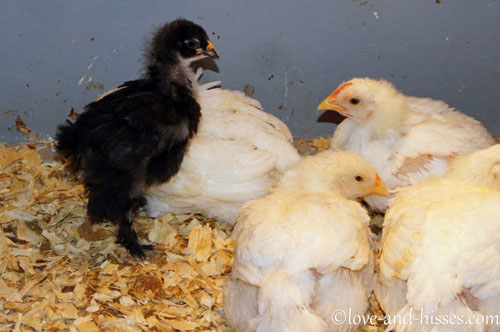 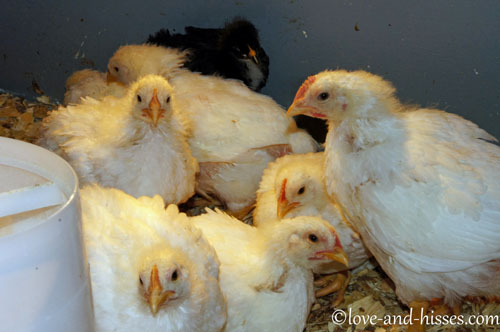 Getting the stink eye from all of ’em. 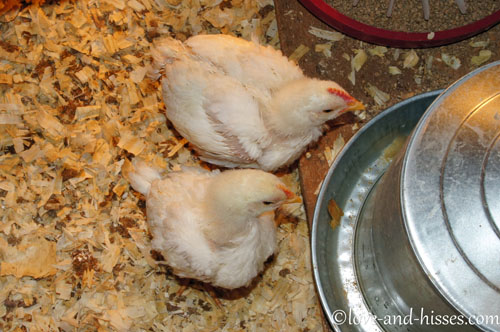 There’s an obvious size difference between the males and females, too.

Fred moved the chicks into the garage, and expanded their brooder. They now have a brooder that’s twice as big as the one they were in, and two heat lamps to choose from. I expect they’ll be headed out to the back forty in a couple of weeks, depending on the weather. 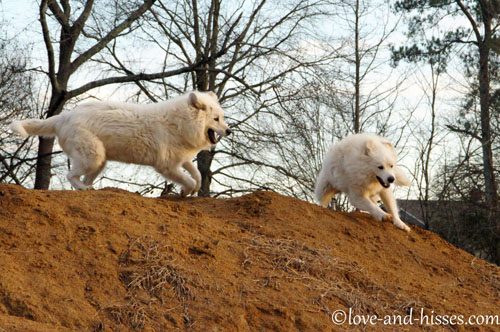 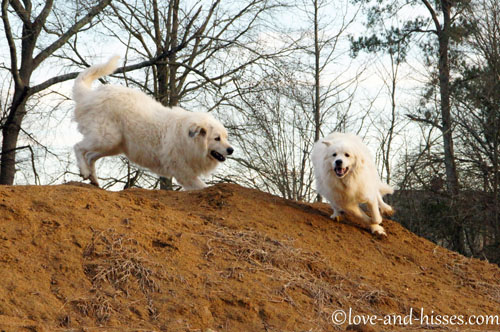 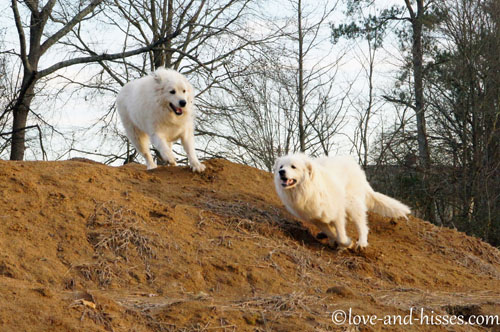 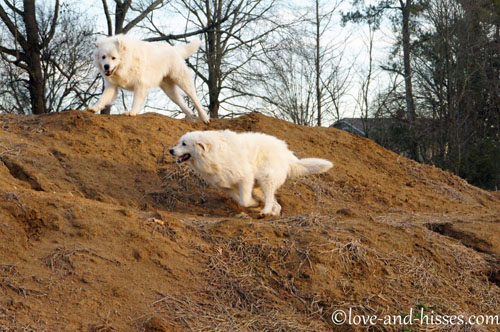 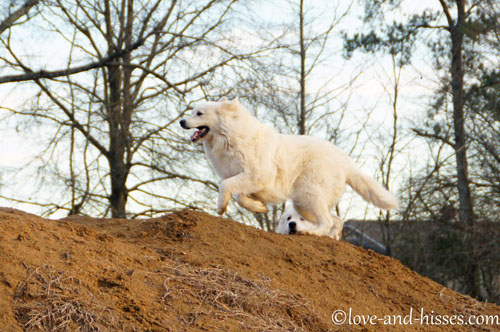 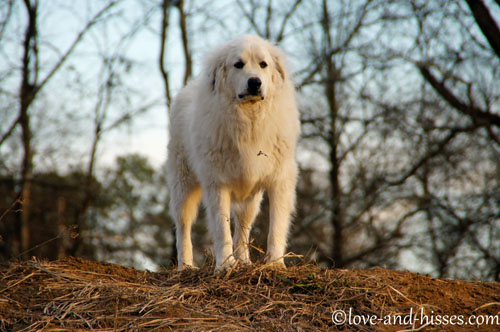 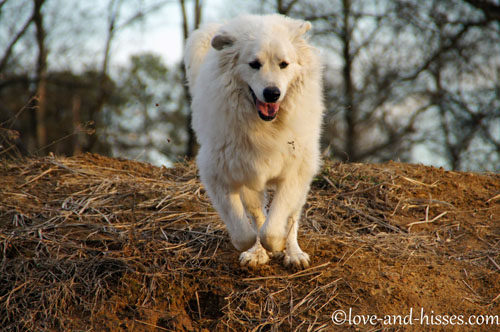 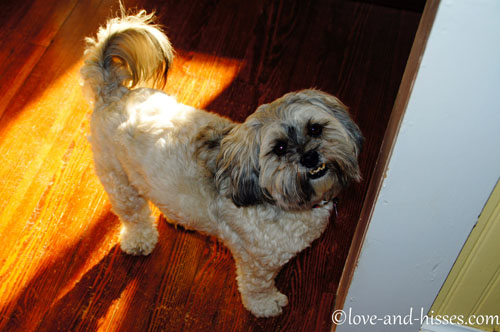 Oh, the underbite. So adorable!

A couple of people have asked, and I guess I didn’t specifically say (What? You guys can’t read my mind?!) – Molly is my parents’ dog. She travels with them; they’re wintering in South Carolina, and they drove here to visit, so of course she came with them.

Molly was adopted from the Coastal Humane Society in Brunswick, Maine. She was part of a bunch of dogs brought in from Puerto Rico, actually – my parents had decided it was time for another dog (they’d said goodbye to their Benjie in September 2011), and they’d been visiting the Humane Society regularly. My mother said that she knew as soon as she saw Molly that she was the one. Molly’s a pretty calm girl, and the cats are getting used to having her here (which is not to say that they’re doing anything but glaring from a distance), so it’s going well. 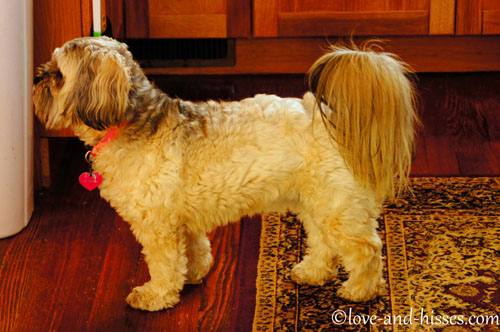 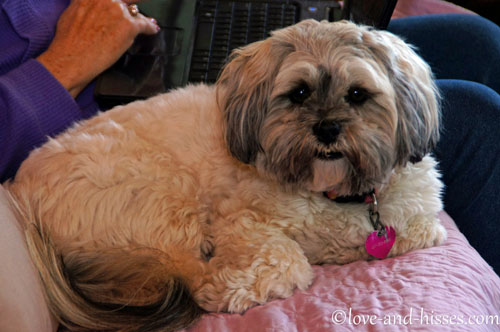 Molly would probably like to be friends with the cats – or playmates – but the cats aren’t having it. Tommy’s the bravest, and I still can’t imagine him doing anything but running for the hills if she tried to play with him.

Molly hasn’t met George and Gracie face to face, and I don’t think she’s going to. I actually think G&G would love playing with her – right up until she chased a chicken, and then there’d be a problem. I don’t want to chance Molly becoming a Gracie snack, so they’ll have to content themselves with being friends through the fence. 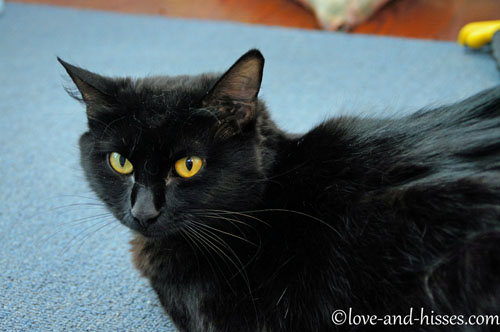 “Wait. There are chickens to chase? No one told ME that. Where are these chickens? Toss one in here, I’ll make short work of it!” 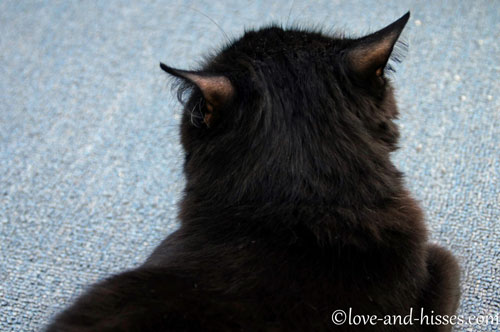 “I’m bakin’ babies, you know. You have to do whatever I tell you to!” 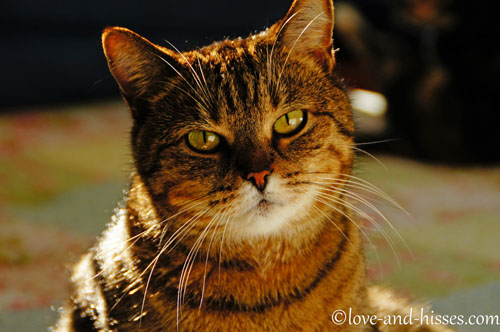 Pretty, pretty Sheriff Mama. In a strange coincidence, the very INSTANT Molly the dog stepped foot in the house, Sheriff Mama was suddenly reassigned from the back yard to the upstairs. She said the orders came from “up the chain”, but refused to show us the proper paperwork. I guess we’ll just have to trust her. She keeps a vigilant eye on all upstairs activity. Is this a promotion? Is she going to make a run for political office? Or is it a demotion? Did she misbehave and have to be disciplined? She’s not saying, so I guess we’ll just have to wait and see.