In case you missed it on social media – or the sidebar – Sammy Samarium was adopted on Saturday! He joins big kitty sister Mouse in his new home. And then on Sunday, Nikki Nickel and Ruthy Ruthenium were adopted together and went home to the Atlanta area. They join big sister Buttons, who desperately needs friends.

This leaves us currently with Carli, Barry and Ozzy from the Elements bunch, and Alfie and Christopher are still here with us as well.

Interestingly, Sarah (who adopted Sammy) actually applied to adopt Christopher. After she’d come to meet him last week and filled out the application, I started really watching Christopher and Alfie together, and came to the realization that they’re a bonded pair and need to stay together. Luckily, Sarah (who couldn’t adopt two kittens due to apartment rules) was fine with switching her application to Sammy.

So if you’re looking for a bonded pair of brothers who are just as sweet and goofy as they could possibly be, speak up!

The pictures in today’s post include the kittens who have been adopted so far. 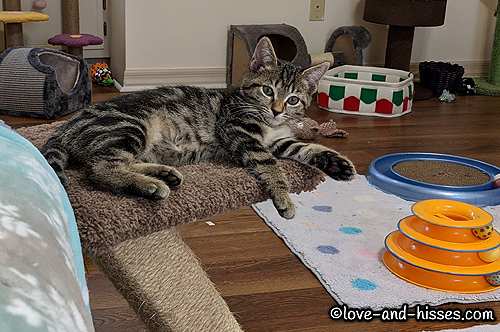 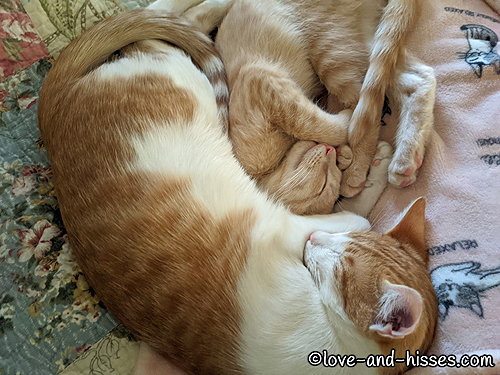 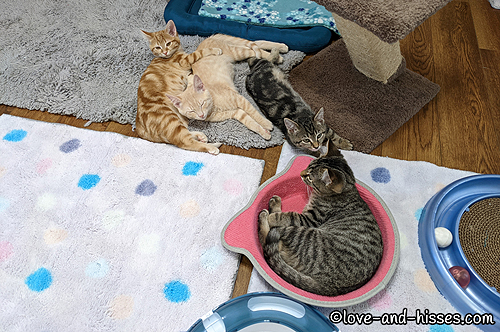 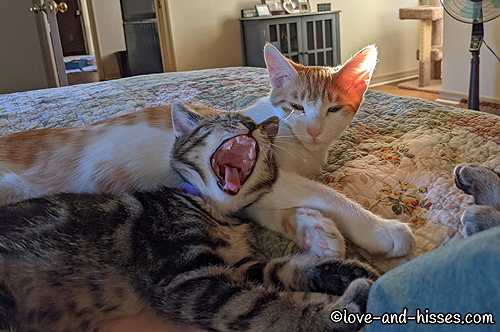 Nikki (with Alfie) could not be more pleased with herself. 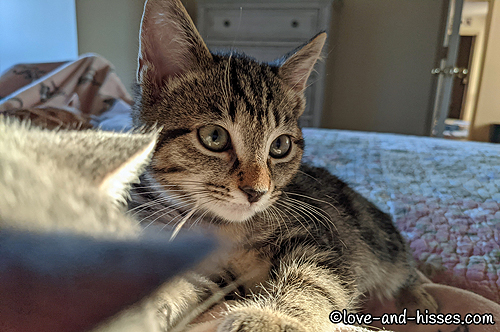 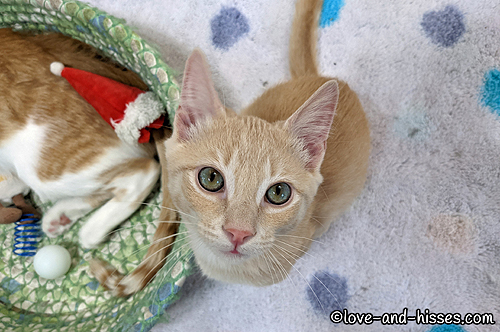 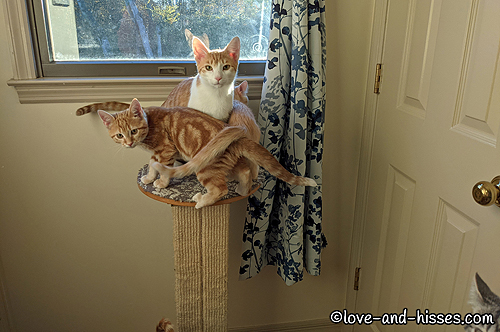 Alfie jumped up on the tall scratcher, and Ozzy and Sammy joined him. Alfie’s face is all “Really?” 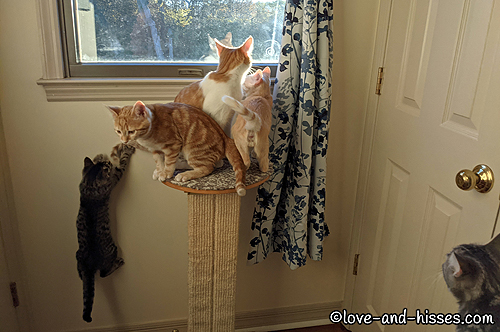 I love that I caught Barry mid-leap going after Alfie’s tail. 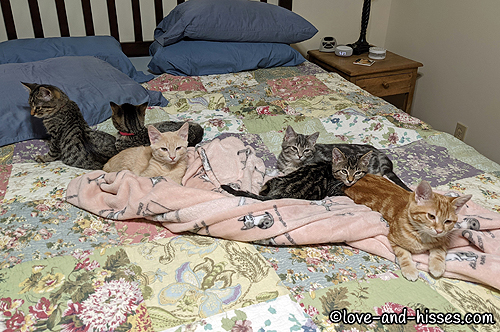 Sometimes nap time continues without me. 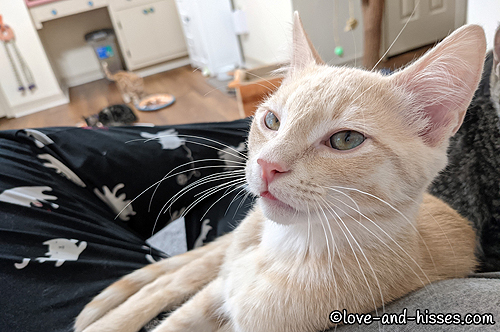 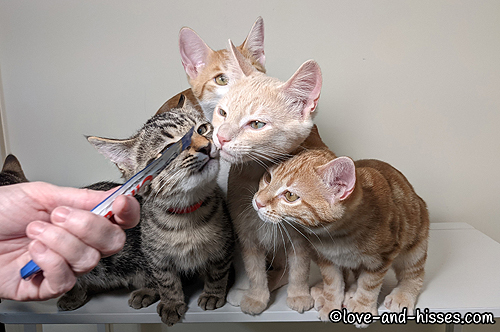 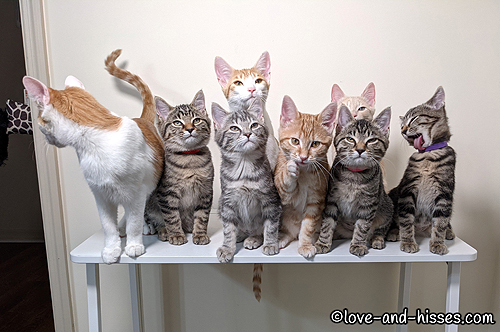 I tried to get a last family portrait before Sammy went home, but alas. 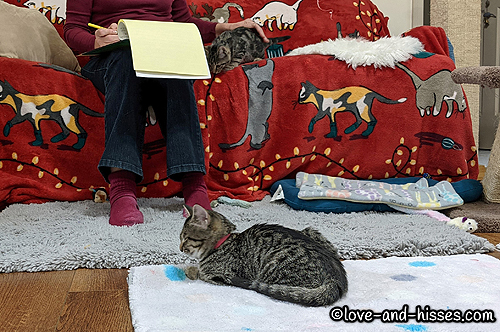 Nikki helps with the adoption paperwork, while Ruthy snoopervises from afar. 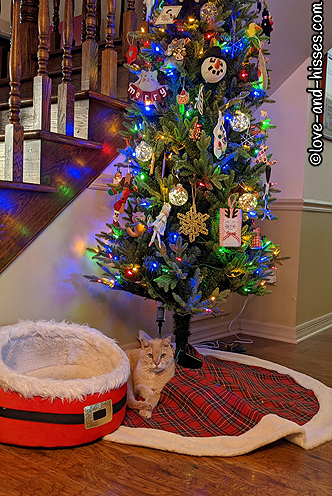 Newt, hanging out under the tree. 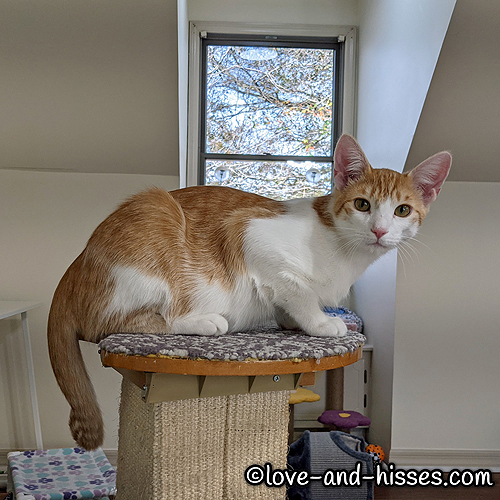 Alfie on a pedestal. ❤️ 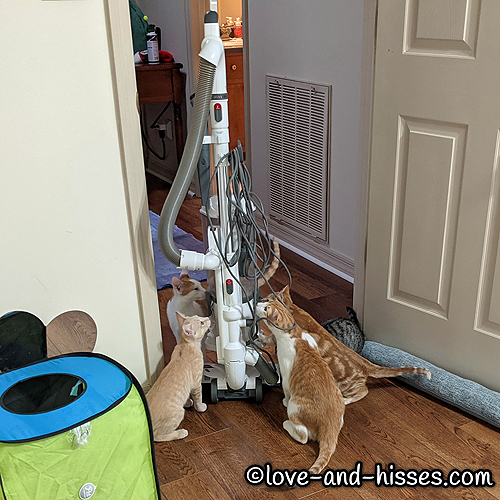 Can you tell these kittens have never seen a vacuum cleaner before? Now that they have the run of the upstairs (and can run into the other room and hide from the vacuum), I figured it was time they saw it. They were not appreciative of it once it was plugged in and turned on. 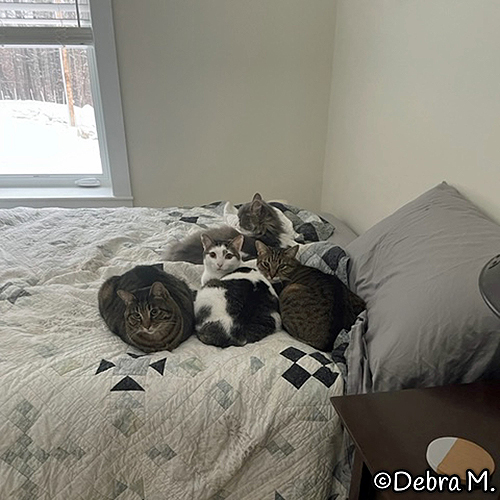 Former fosters Stardust and Phoenix (Mercury’s daughters, 2017) and Amber (bottle baby, then Ambercup, in 2015) join their siblings Truman and Mollie in a cuddle pile whilst ignoring all that white stuff out the window. (They live in Maine now!) 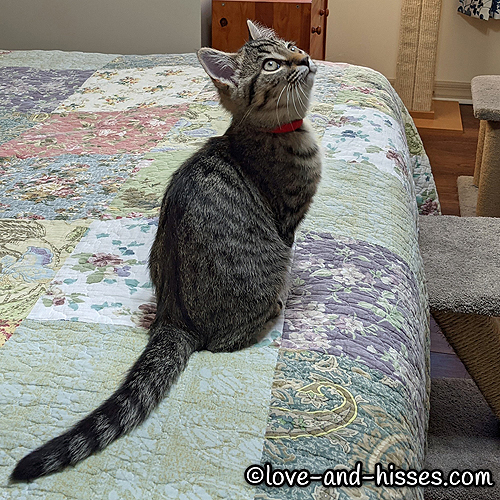 Barry’s flirting with the ceiling fan.

YouTube link
Alfie Alfredo might could be Da BAYbee. I don’t know that he put his heart into that response, but ya know… at least he’s considering the idea of admitting that he is. 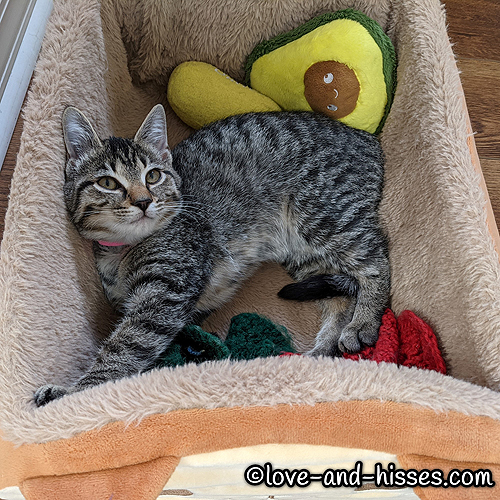 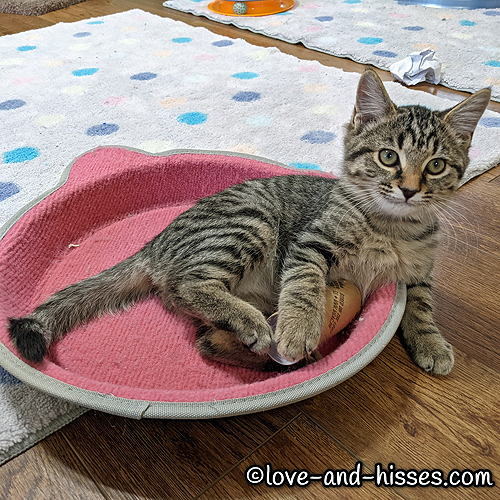 YouTube link
Good morning from the kitten room, where they’re just hanging out and being adorable, as usual. 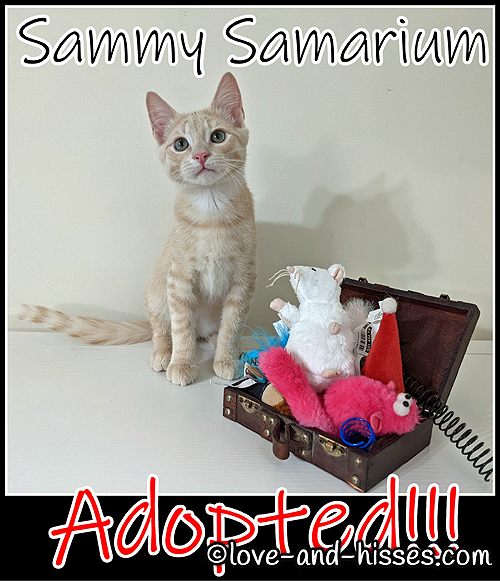 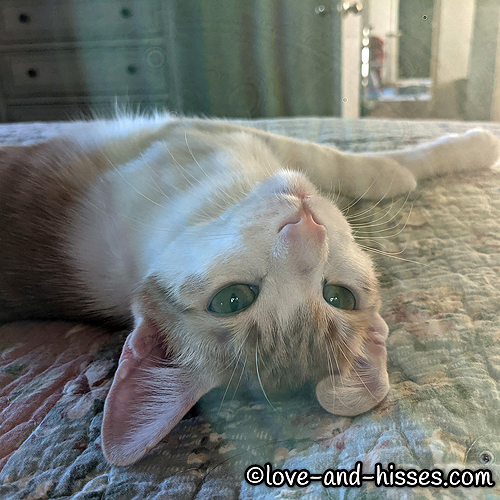 Alfie Alfredo, snoozin’ in the sun. 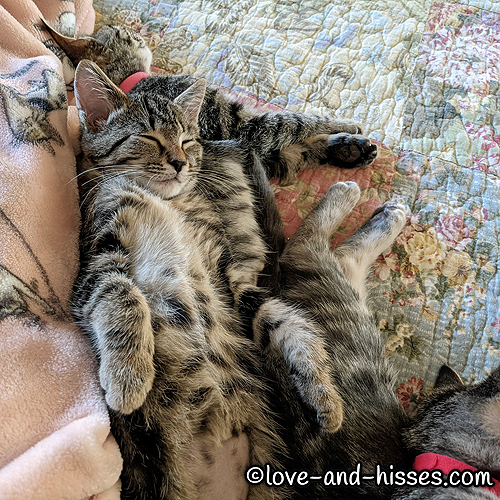 Good night innernets. (Nikki, Ruthy (serving as Nikki’s pillow), Carli’s back feet, and down there in the bottom right is part of Barry’s head.) 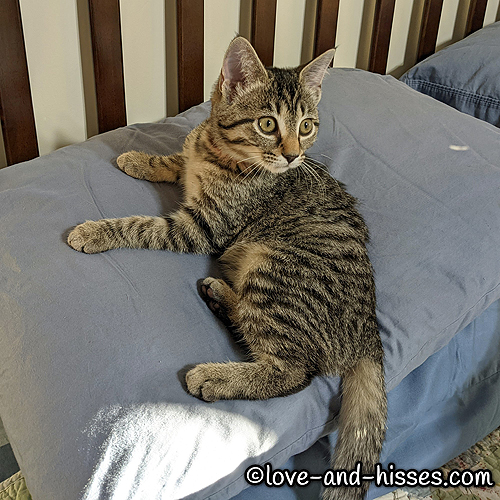 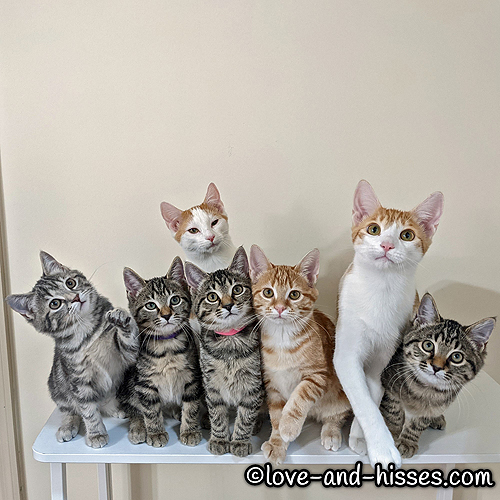 And then there were 7. (In case you missed it, Sammy was adopted yesterday!) In the back: Christopher Chutney. Front, from left to right: Carli, Nikki, Ruthy, Ozzy, Alfie, and Barry. 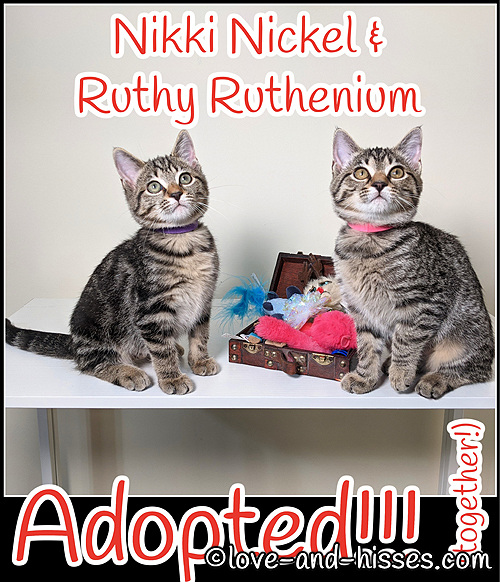 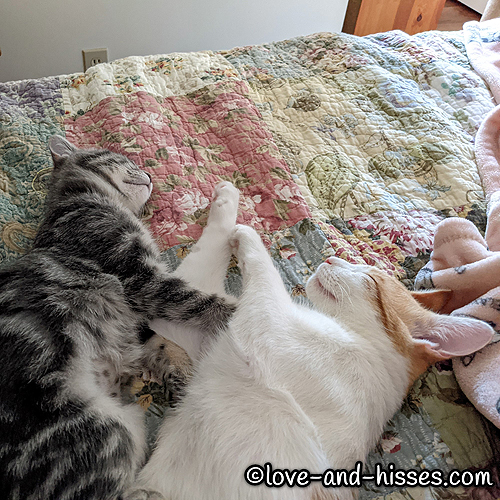