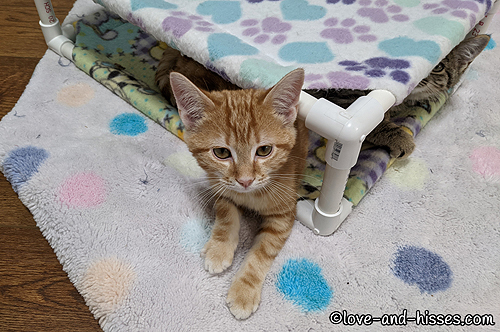 Ozzy and Barry coming out from under the Ham-mick. That’s one of their (many) favorite places to snooze. 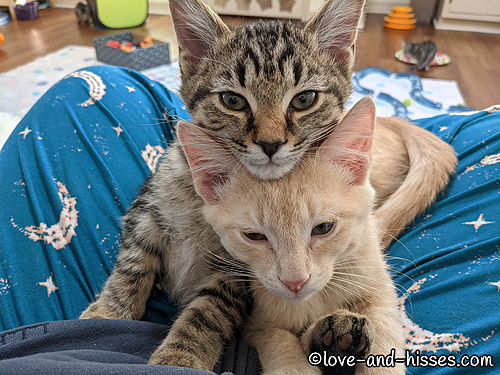 Barry loves to snuggle with his siblings. 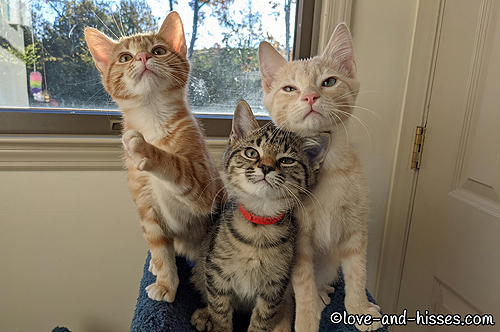 Look at how he’s rubbing his head against Sammy. Too cute. 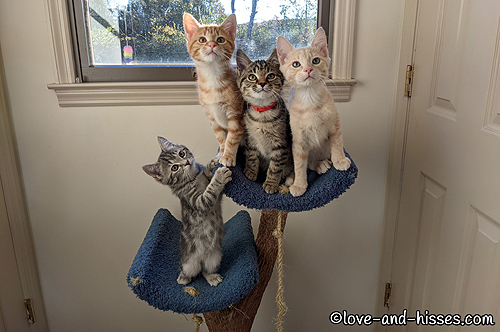 Posers. Carli on the lower platform and Ozzy, Barry and Sammy on the upper platform. 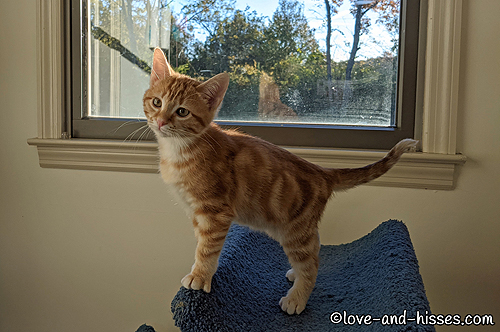 Ozzy showing off his fabulous swirls. 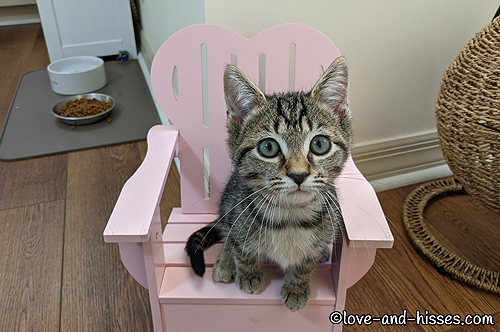 Nikki with the Precious Moments eyes. Oh, that girl! 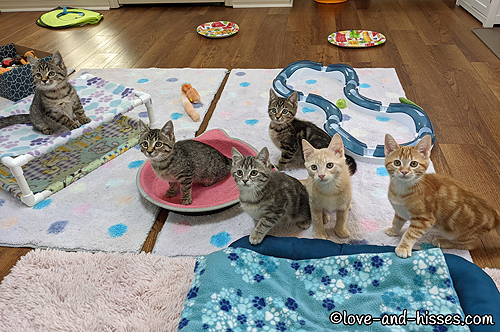 Line ’em up! Barry on the Ham-mick, Ruthy in the pie plate, Carli with her left paw on the blue bed, Nikki behind her, Sammy next to Carli, and Ozzy on the end. 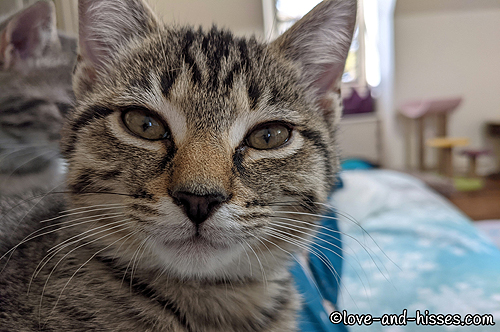 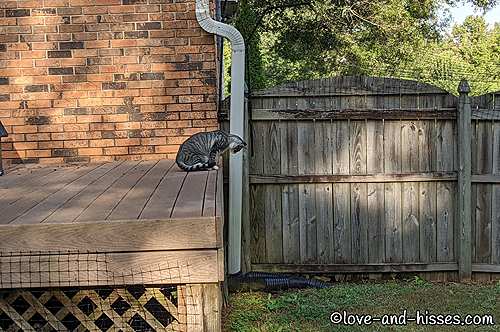 I think Charlie was watching a mole. We have a very mole-y back yard. Wouldn’t you expect there to be steps at that end of the deck? I swear it’s only a matter of time before I go waltzing off the end of that deck and break a hip, AND THEN THERE’S GONNA BE TROUBLE. 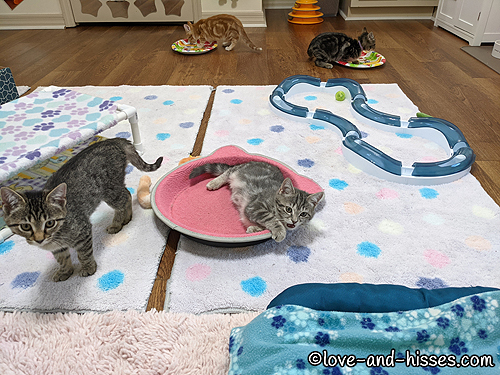 A little of this (Ozzy and Nikki eating breakfast), a little of that (Carli in the pie plate watching me suspiciously), a little of the other (Ruthy trying to decide her next move.) Sammy and Barry in my lap, of course. 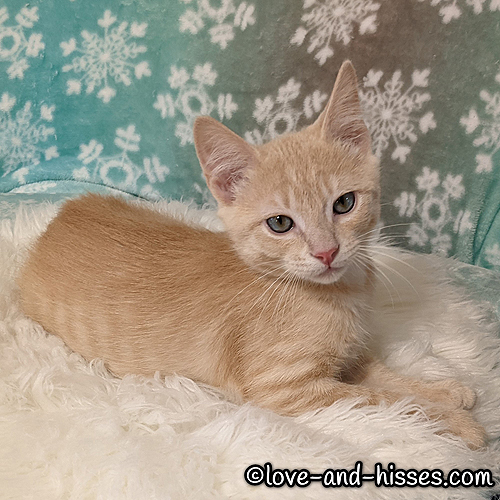 Oh that Sammy. Such a little POSER.

YouTube link
Get your fresh biscuits here! Made to order by Nikki, who really likes to put her shoulders into that whole kneading process. 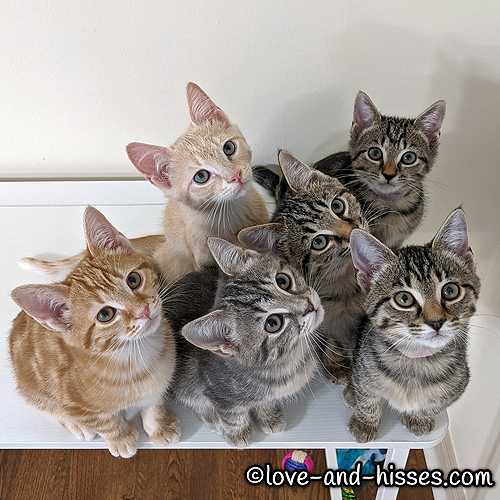 “Bring the Churu back over here, lady.” On the left: Ozzy (orange), Sammy (cream-colored). On the right: Ruthy (front, pink collar) and Nikki (back, lavender collar). In the middle: Carli (front) and Barry.

YouTube link
Here’s the secret to getting those good pictures of the kittens all lined up: Churu and a feather teaser. (I am not sponsored by Churu but, y’know… I’m sure we could work something out, Churu! ) Sorry it’s so long – I didn’t intend it to be, but you know how it goes.

Notes: The kittens get one Churu per day (sometimes two if they’ve cleaned their room and put away their toys), split between the six of them. We don’t use Churu as a primary food source; it’s a treat. (That said: if you’re having a hard time getting your cat/kitten to eat, I’d definitely recommend giving Churu a try. I’ve had, I think, two kittens who did not care for Churu. All the others have been huge fans.) For those who don’t know/can’t tell: Churu is pureed (baby-food consistency) food in a squeezable tube. Yes, Sammy fell off the side of the desk in his excitement to get more Churu; he’s fine (the desk is fairly low and he fell onto a rug. Also, kittens are made of rubber and filled with marshmallow fluff and recover quickly from the insult of an accidental fall.)

PS: Yes, I called Ruthy “Ruby.” It’s something I’ve been accidentally doing since the very beginning, she just must look like a “Ruby” to me. 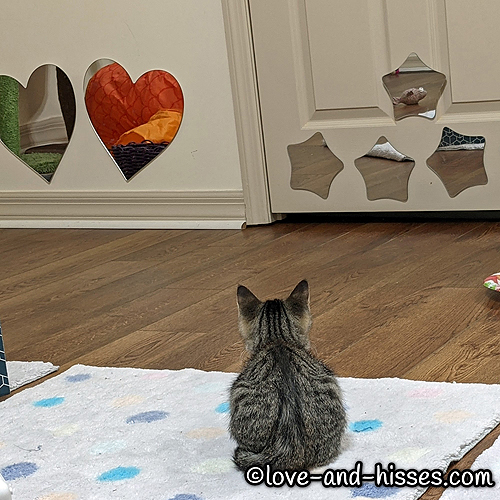 Before bed every evening, Fred and I hang out with the kittens for a while. I was on the couch with 5 kittens in my lap and Barry (who has clearly figured out the routine) was sitting and watching the door, waiting for Fred to enter (and probably hoping he was bringing Uncle Charlie with him.) 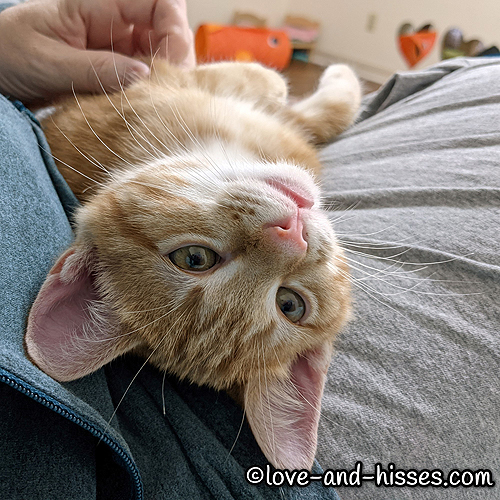