Those of you who contributed to the ChipIn for Heaven, who maxed out her credit cards to pay the vet for her beloved cat Dirty Feet, Heaven would like to say thank you.

In fact, she said:

Also, if you’re Facebook friends with Heaven, go watch this short video she made when Dirty Feet was a wee baby. It KILLS me, and I think I’ve watched it 130 times.

I think I’ve probably told y’all that in our kitchen, some of the cats like to hang out on top of the cabinets. Stinkerbelle, especially, spends a lot of time up there. Recently, we’ve had issues with Elwood or Sugarbutt getting up there and hanging out. Since Stinkerbelle’s favorite place to hang out is at the end of the cabinets as far as possible from the refrigerator, which is how the cats get up and down, she gets stuck there. She doesn’t like to go past the other cats to get to the refrigerator so she tries to intimidate them with hissing and growling and eventually screaming her hellcat scream. They’re not terribly intimidated by her, at least most of them aren’t, so it doesn’t work very well for her. One day last week she JUMPED from the top of the cabinet to the floor, which cannot possibly be good for her joints or her bones. I know for sure it’s not good for my heart, because I just about keeled over from a heart attack when I walked into the room just as she jumped.

Fred has been talking about making a second way down from there, and after I saw Stinkerbelle jump, I demanded he do it sooner rather than later.

What happened next was something unexpected. I don’t think I’ve mentioned this before, but Jake isn’t able to jump as high as the other cats – he’s never been able to – and he’d never been on top of the cabinets. He’s only been able to watch the other cats run around up there, and chatters excitedly at them. After Fred installed the boards, he put Jake on top of the one between the kitchen and dining room, and Jake absolutely lit up. He walked around on the cabinets, and it was like a whole new world had opened up to him.

Fred considered the situation for a few minutes, and then back out to his workshop to make it so that Jake could get on top of the cabinets whenever his little heart desired. An hour later, we showed Jake the new way to get up there, and he took to it like a duck to water. 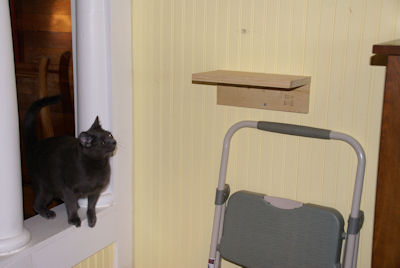 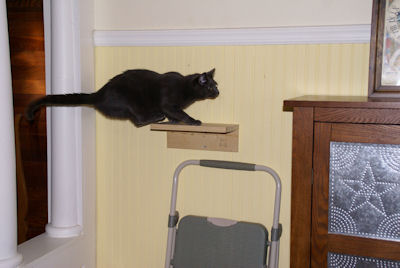 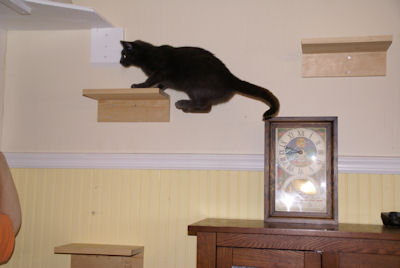 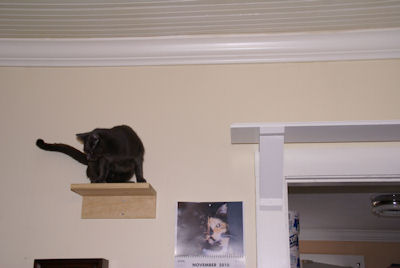 (That shelf to the left goes to just under the top of the cabinet where Stinkerbelle spends most of her time.) 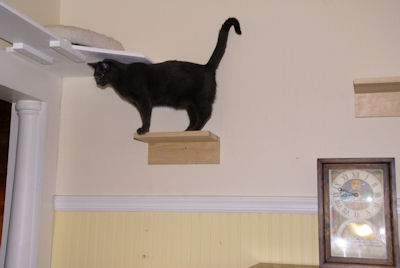 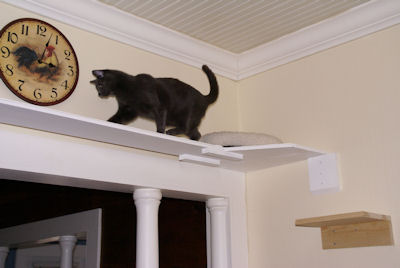 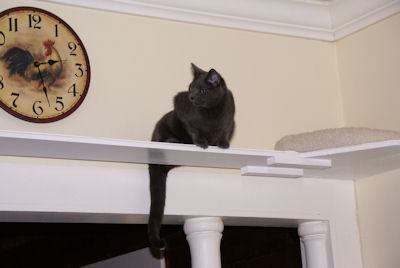 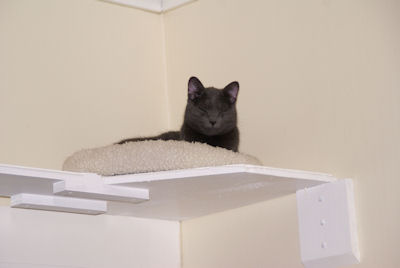 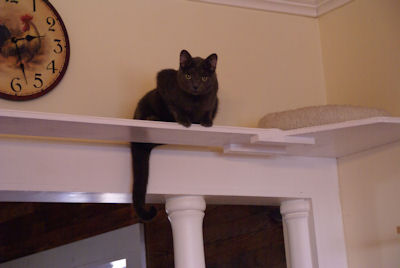 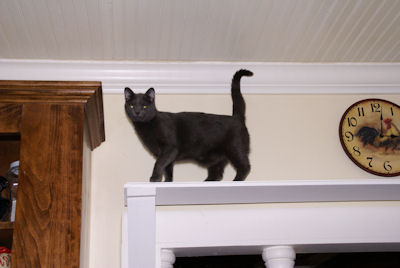 Have you ever seen a happier cat?

He spends a large amount of his day in that cat bed (which is hooked to the wall so it can’t go sliding off), and loves watching us from his new favorite perch.

(Those three unfinished shelves are going to be painted white this weekend, by the way.) 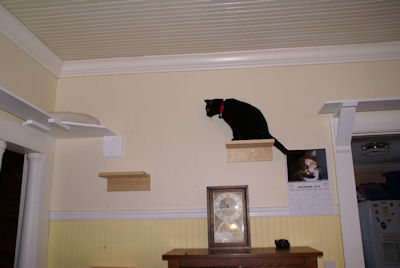 I’m pushing for the next project to be a walkway around the top of the front room. Fred’s not convinced yet, though. 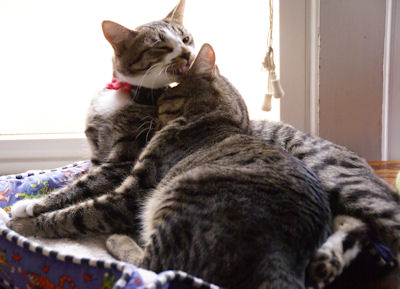 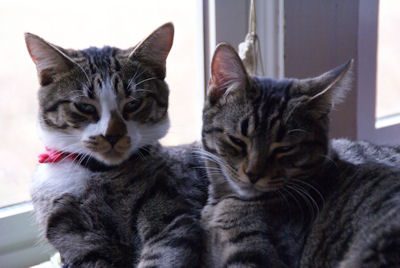 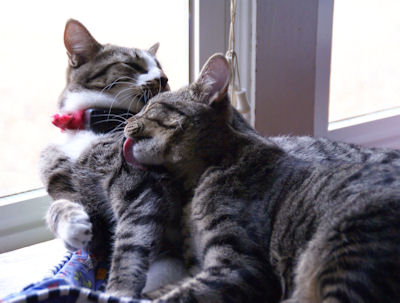 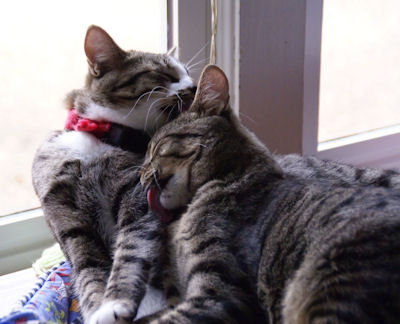 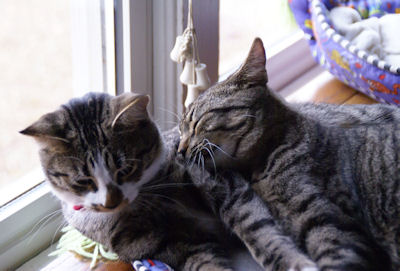 Rhyme’s all “I LURVE my brudder!” 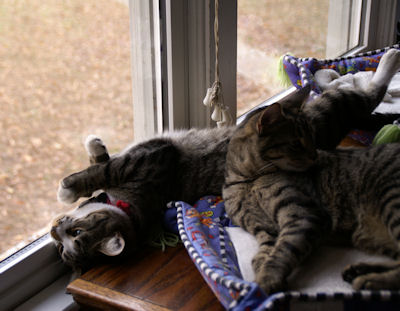 Buster’s apparently decided that the only way to get away from Rhyme is to do the ol’ stretch-and-roll out of the bed. 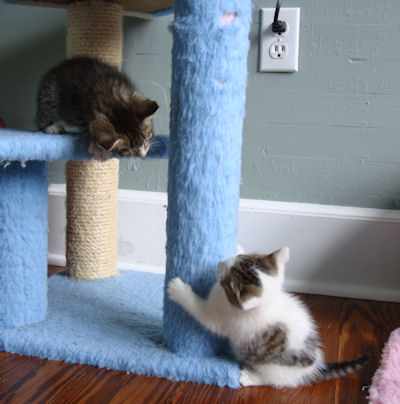 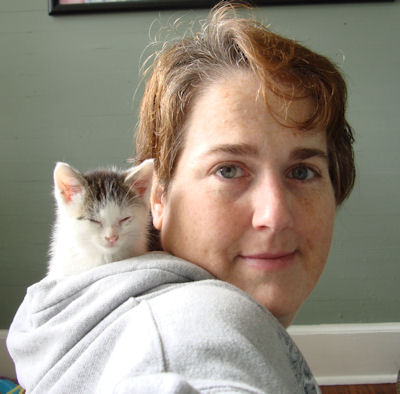 Shoulder monkey BOBBY! BRADY! asleep. I always wondered what they made hooded sweatshirts for. 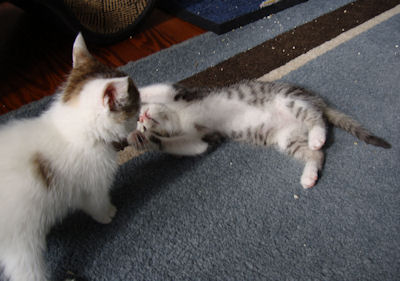 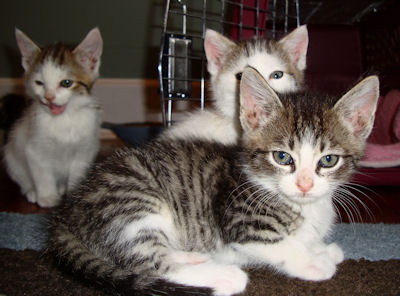 Greg in the front, Cindy in the back, and Jan over there licking her lips. Oh, and someone mentioned in my comments that Jan looks like she has particularly big and pointed ears. She certainly does – they’re very pointy, and they actually turn out a little on the end. 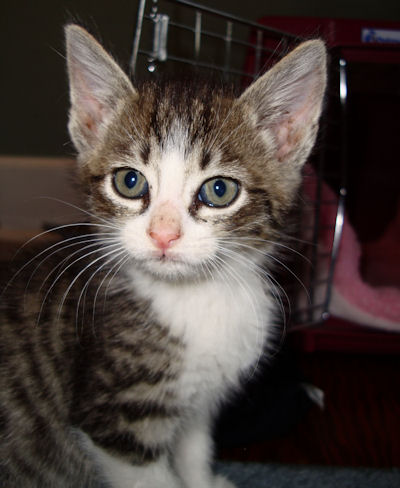 “Greg Brady will cut you if you try to turn Dad’s den into a swinging bachelor pad. Greg Brady has dibs. Greg Brady is hip and groovy, man.”

I’m pretty sure I washed kitten feet at least 20 times yesterday. Why why OH WHY must they walk through their poop?

Kitten diarrhea is the bane of my existence. (But I have to confess, the face they make after you put medicine in their mouth to deal with what’s causing the diarrhea cracks me UP. I need to take the Flip video into the room next time I medicate them.) 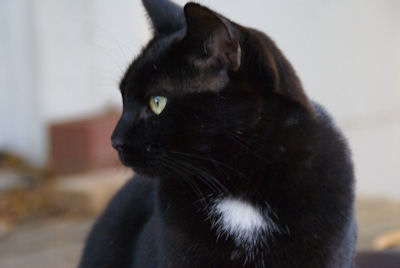 Maxi demonstrates her overbite. It just adds to her charm, if you ask me.