Yay! We have an update on Daisy (the kitten formerly known as Arya)!!!

Daisy is doing GREAT! She is rambunctious, playful, lovey, and did I say rambunctious? Yeah, that girl has some fire in her. She is fearless still and loves to play and run. If her type of play means doing parkour in a circle on the backs of your sofas including over the front of you, then she is in!

Anyway, the girl is doing great. She has totally assimilated into our family and has become great friends with Buddy. He looks like a giant next to her, but she can really hold her own. The only time I really break them up is when he whacks her hard on the head. That is his go-to move, and he can really pack a punch. Her go-to move is to lie on her back and keep his face away with her back paws while she bites him. They haven’t really snuggled together, but I didn’t expect that, Buddy has always been on his own. She tries sometimes, as you will see by one of the pictures. The only thing I can quibble with is that she wakes me up every morning at 5:30am by snuggling and licking my face. She may have gotten this time from my usual wake up time for work (she was close, it is really 5:50am), but she does it on the weekends too! And when daylight savings started, she was waking me up at 4:30. I walk around like i have a newborn! I know, I could lock her out of my room, but that would mean not being able to have those minutes of snuggling in the morning which I love, or waking up to her sleeping on the pillow next to my head. She truly is the sweetest thing. She was trying to get near him and get his attention, he wasn’t having it. They did end up sleeping somewhat snuggly. He did rest his head on her leg! I know cats shouldn’t have ice cream, but this was the first time she was interested in any people food. She just got a couple licks. She and Buddy like to sleep under the bed together. Just wanted to let you know that this foster kitty is doing just fine and her humans are so happy to have her.

Thank you so much for the update, Kathy! There goes Tony, flirting with the ceiling fan again. Playful monkeys in the sun. I know that SUPPOSEDLY cats don’t start feeling the effects of catnip ’til they’re between 3 and 6 months old (these guys aren’t 3 months old for another couple of weeks), but you certainly can’t tell by these guys. Silvio and Carmela are HUGE catnip fans. Silvio’s high on the ‘nip. I swear she stared at that shadow on the wall for a full two minutes. Livia’s not too pleased that SOMEONE has been giving catnip to the babies. Carmela pushing on the Ham-mick to move herself along the floor is cracking me up. That is one high girl. This is from last weekend, before Livia was banished to the upstairs. She had a dislike for Alice. Alice was none too thrilled with Livia, either.

I finally got a video of Silvio and the mink tail! He cracks me up. Toward the end, you can hearing him hissing at the other kittens who got too close. Not the sharing type, that boy. Tommy and Stinkerbelle, on the window bed. Stinkerbelle certainly does love her Tommy.

That window bed has been there for about a year (more or less) and has held up well. And then a couple of weeks ago Tommy was jumping from there to my bed, and the force of him pushing off was just too much for the window bed, and it collapsed to the floor. It lasted longer than I would have expected a free window shelf (I got it using my FreshStep points, back when I was using FreshStep litter) to last. Luckily, I was able to get Fred to make a simple window shelf to replace it, and it’s much sturdier than the other one was. I’ll get a picture of it one of these days, when I think of it.

Okay, since I know I’ll never remember to take a picture of it in the future, here it is, a quick picture taken with the iPad. I particularly like that Fred put a “lip” around three edges of the shelf so that they won’t knock the cat bed onto the floor. 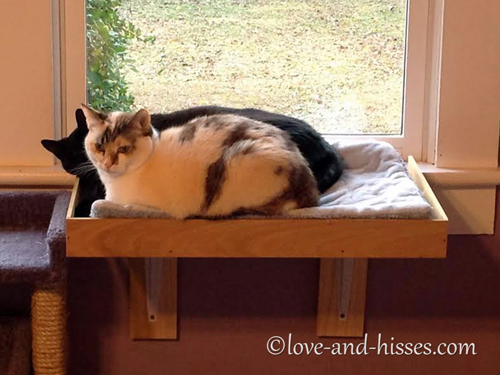