Okay. Don’t get excited about this and jump to conclusions. On my desk right now as I type this: 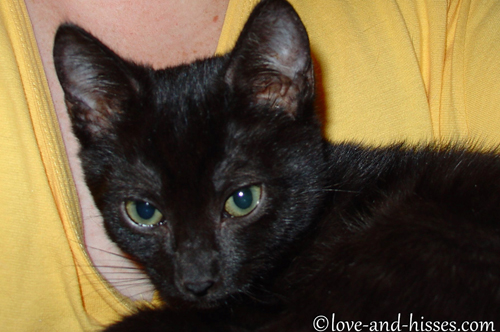 No, we aren’t adopting him. Yesterday, a few hours before I was going to take the whole bunch to the pet store, I noticed that Bear wasn’t acting like himself. I picked him up and held him like a baby – which he usually loves – and he let out a growly little hissing noise, and struggled to get away. I just figured he wanted to go play, but a little while later I noticed that if any of the other kittens approached and wanted to play (he was laying on the cat bed in the living room), he’d growl at them. I picked him up again, and again he did the growly-hiss thing. All he wanted to do was lay on the bed and sleep, and at one point he got up and walked over to the water bowl and was moving slowly and not quite, but almost limping.

I called the shelter manager, and she offered up a few things that it could be. I asked if it would be okay to take the other kittens to the pet store and keep Bear here to keep an eye on him for a few days, and if he didn’t improve, or got worse, I’d take him to the vet. Of course she said that was fine, so when I took Smitty, Sugarbutt, and Callie to the pet store, Bear stayed here.

All I’ll say about leaving the three at the pet store – the boys in one cage, and Callie in a cage by herself – is that it sucked as usual, and it didn’t help that Callie was scared and meowing pitifully for me to come rescue her. I cried a little on the way home, because it really bothers me that she has to be in a cage by herself. I didn’t feel too bad for Sugarbutt and Smitty, because they at least had each other, but Callie all by herself, scared, made me very sad.

So for most of the rest of the evening Bear slept on the cat bed in the living room, though he did get up a couple of times to drink water – which made me happy, because at least I knew he wasn’t going to get dehydrated – and for a little while he jumped up and snoozed on top of me (I was laying on the couch). We put him in the kitten room when we went upstairs, but when Fred came downstairs for a minute and then back upstairs, Bear heard him (the stairs go right by the kitten room) and started scratching and meowing to be let out. I felt sorry for him and suggested that we let him out of the room for the night.

Fred let him out, and brought him into my bedroom, where for the next half hour or so, Bear snuggled up next to me, under the covers, and snoozed. Then he jumped down and went to get some food and water, and Mister Boogers was right on his butt, sniffing and making his “I’m disturbed” noise. Bear ate and drank, and then actually batted at a toy for a few minutes, then went out of the room to explore. Mister Boogers continued to follow him around making his “I’m disturbed” noise and after about fifteen minutes of that, I went out to see what was going on, and Bear was sitting on the top stair looking a little scared and Mister Boogers was being a pain and all I could think was, “I’m tired and I don’t want to listen to this all night”, so I scooped Bear up, gave him a kiss on the head, and put him in the kitten room and shut the door.

He meowed pitifully a few times, then settled down and (I assume) went to sleep.

This morning at 8:00 when I opened the door, he was sitting right by the door, and he looked up at me and purred and pranced out of the room and trotted off to check out the food situation in our bathroom, and played and touched noses with Mister Boogers. In other words, he acted like his old self. He’s limping a little bit, but he’s acting like himself, so we suspect that he just landed wrong on one of his legs while he was playing or something, and had a sore leg. I’m going to keep him here for a few more days just to be sure he’s okay, and then Friday he’ll be going to the pet store.

I think he’s a little bored with us, since he doesn’t have any other kittens to play with at the moment. 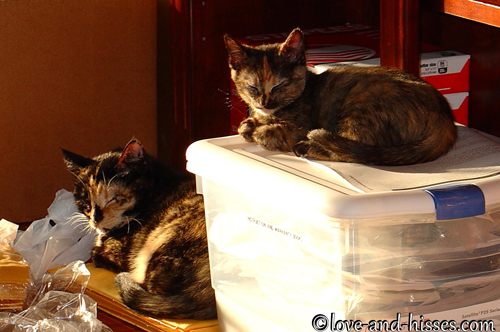 Torties in the sun. 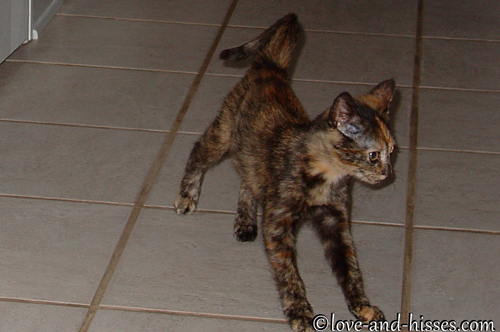 Callie in motion. Nothing scared her, I just happened to snap a picture when she felt like running across the room. 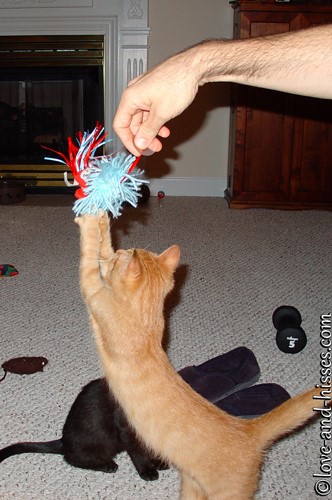 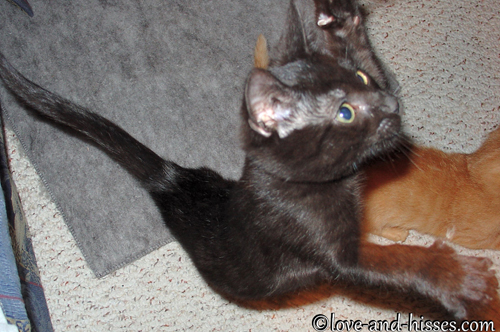 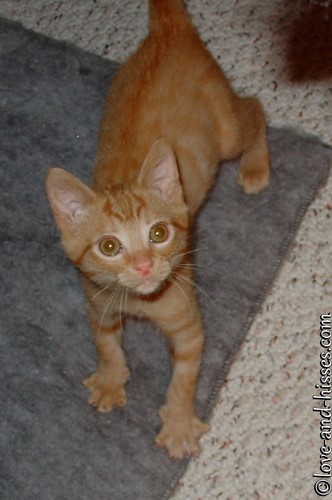 I love the little spread-out claws.