Note: On December 20, 2012, we said goodbye to Elwood, who was only 3 years old, and ill from FIP. You can read about that here. (I never expected to lose him at such a young age; at some point, I’ll make it so that he and Jake have their own separate pages.)

About Jake and Elwood.

Jake and Elwood will turn three next month.

Mister Boogers died on June 30, 2009. He was a real character and we still miss him. About six weeks after he died, we left the house on a Saturday morning to go on a road trip up into Mennonite country in Tennessee. Hours later, we returned home and as we were walking toward the side door, I saw something move out of the corner of my eye. I turned my head and looked. It was a little gray kitten. A second later, we saw a second little gray kitten. On the steps was a container full of cat food. That was it – two kittens and some cat food. Clearly we’d gotten a reputation in our little town as cat lovers, and someone had dumped these little two gray kittens off on our steps in hopes that we’d do something with them.

(We searched to see if there were any more than just the two, but we never found any other kittens.)

It was originally our intent to foster these two kittens for Challenger’s House (the shelter manager gave us the okay), but within about 48 hours, that intention crumbled into dust. They were so adorable and such sweet, snuggly kittens, and they reminded us so much of Mister Boogers that by the time the weekend was up, Fred had agreed that we should keep them. (It was, I’m sure you can imagine, SO difficult to convince him.) It took us a few days to name them, and we went through a myriad of names (I really liked Ezekiel and Zebediah – Zeke and Zeb! Fred suggested Grey’s Anatomy names, then said we could name one of them McDreamy, and I said we could name the other McSteamy and call them both “Mick.” I also really liked Bubba and Gump, but Fred didn’t (odd, since that’s his favorite movie). I suggested George and Lenny (Of Mice and Men), Stu and Larry (The Stand), Fred suggested Javert and Valjean (Les Mis) or Jesus and Judas (heh). Fred suggested Frick and Frack, which I kinda liked. Lisa suggested Thing 1 and Thing 2, which I liked a LOT, but Fred did not. What I really really REALLY liked and couldn’t convince Fred of, was that Samuel and Jackson would be EXCELLENT names. Sam and Jack! How perfect is that?) until the day Fred walked in and said “They’re blue. They’re brothers. They’re Jake and Elwood!”, and that was that. They have basically grown up with foster kittens coming and going, and Jake absolutely adores kittens (well, when there aren’t too many of them, that is). Elwood enjoys the occasional snuggle with a kitten, but he’s mostly interested in making sure they know he’s the man in charge (at least in his own mind). When they were kittens, we had the True Blood Six, and they all played together wonderfully. I think that Jake doesn’t know he’s a grownup, he thinks he’s still a kitten, so when he sees foster kittens, he think they’re his people. Although Elwood looks like a grumpy guy, the truth is that he’s a big ol’ lovebug. He adores being petted, he loves being snuggled, and when Fred and I sit in the living room watching TV, Elwood will get up on the pillow on Fred’s lap and sit there and purr and purr. I tell Fred that Elwood looks like a big ol’ tick perched there on that pillow, and he totally does. Most of all, Elwood loves Tommy. If Elwood isn’t bugging one of we humans for petting, he’s laying up against Tommy, purring so loud he squeaks. He loves his food (obviously), and he’s a surprisingly good hunter for a fat cat. He also likes Jake, and the two can be found cuddling from time to time. I love it when sibling kitties get to grow up together.

Jake – I’d tell you when he came into his look o’ looniness, but I truly don’t remember – is the most laid-back cat we’ve ever had. He’ll let Fred pick him up, flip him onto his back, hang him upside down, and he purrs the entire time. He’s good with the foster kittens (there’s always some initial hissiness on his part as well as on theirs, but they all usually get over it pretty quickly), and he absolutely adores the other cats. I’m sure I’ve told the story of how when Fred is putting collars on some of the cats in the morning before he opens the back door, Jake knows that they’re being held in place so that Fred can fasten the collar. Jake will walk back and forth next to whichever cat is being collared and rubs up against them. He loves everyone, and for the most part they tend to put up with him. He’s a submissive cat – he’s not interested in being the alpha cat – and it used to make me mad that I’d see Elwood standing next to Jake, the nape of Jake’s neck in his jaws. Except that Jake will actually walk over to Elwood and flop down in front of him so that Elwood can do it. It’s a little odd, but I don’t ask questions because I think I really prefer not to know what that’s about.

Sometimes I’ll catch sight of Jake out of the corner of my eye, and for a second I’ll think he’s Mister Boogers. 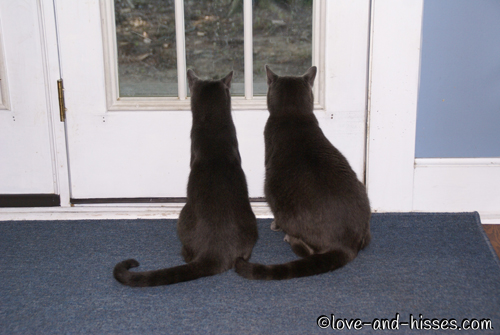 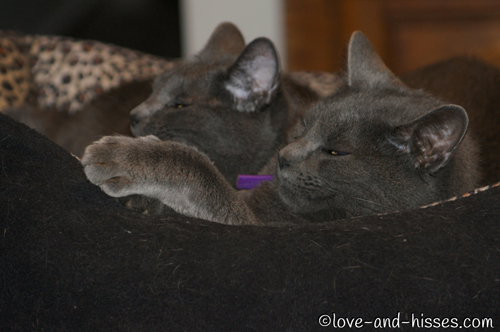