We’re continuing our Meet the Permanent Residents! posts with Jake and Alice.

Jake came to us in August of 2009. Fred and I were out of the house running errands all morning, and when we pulled into the driveway, we found two little gray kittens, a Cool Whip container of cat food, and a stack of egg cartons sitting on our side stoop.

Jake on the left, Elwood on the right.

We intended to make them foster kittens – and got the okay from Susan at Challenger’s House, who we were fostering for at the time – but it didn’t take us long to decide that they should stay with us. We dithered over names for a few days, but Fred came up with Jake and Elwood and we thought they fit perfectly. We were smack-dab in the middle of fostering the True Blood kittens, and since Jake and Elwood were about the same age, they had a blast playing with the other kittens. In fact, both Jake and Elwood enjoyed playing with the fosters we had, at least when they were kittens themselves. We guesstimated their date of birth to be June 16, 2009, which means that Jake is 10 1/2 years old. It didn’t take long before Jake’s loony nature surfaced. With those muzzle pouches of his, and his big round eyes and the way he smiles, he can look completely insane. We started calling him Loony Jake by the time he was six months old, and we’ll often announce to each other that Jake’s loons are on full display and that his loons are well-tuned. See? Such a little loon.

Jake and Elwood were not only brothers, they were best friends, and we’d often see them together snuggling or fighting or exploring the back yard. Jake on the left, Elwood on the right.

Unfortunately, in December of 2012 Elwood had a short unsuccessful battle with FIP, and on December 20th we said goodbye to him. He was just over 3 years old.

Jake handled losing his brother okay – he has become friends with various other permanent residents through the years, likes most other cats, and though I’ve said that he doesn’t like the fosters, I should clarify: he doesn’t like 10 fosters running at him, but if there are a couple of them, he’s fine. When Henri was back here at Thanksgiving, he grabbed at Jake, and Jake just said “Brrrp!” and swatted him playfully. 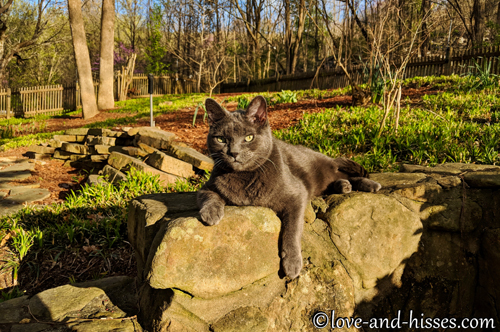 Honestly, what is there to say about Jake? He’s a good boy, a goofy boy, he loves his siblings (even if they – Alice and Kara – don’t care for his attentions). He adores a treat and can be brought running with a shake of the treat jar. He loves to tussle with Frankie, will snuggle with Frankie and with Khal, and at snack time he presses his head against Kara’s in a move we call “the mind meld.”

He LOVES toys, especially floofy lightweight balls or jingly mice that he can carry through the house. And he DOES carry them through the house, howling and howling and howwwwwlinnnnnnng. He doesn’t do it all the time, but he goes through periods where he does it several times in the course of an hour, and it makes me want to throttle him. (And then he drops the toy on the floor and looks so proud that I can’t be mad at him. Unless he does it in the middle of the night, in which case I have no problem at all being mad at him.)

I’ve thought for the longest time that he doesn’t like to have his picture taken, but what he actually appears not to like is when we stand over him and point something at him. If I walk very slowly toward him and keep a respectful distance, he’ll allow the picture taking. If I stand over him and reach down, he skedaddles away. But if I sit on the floor and call him, he comes right over to be petted and kissed. He’ll still let Fred pick him up and flip him onto his back like a baby, though he won’t stay for long. Alice came to us in December of 2010. It was a FREEZING December day, and Fred opened the door to step out onto the porch. Something went skittering away from the food bowl, and Fred thought “Was that a cat?” and followed her around the house to the front porch. When she saw him approaching, she ran off the front porch to a huge boxwood bush on the other side of the house, and she went into the bush and hid.

Fred and I spent what felt like forever trying to get her to come out. Finally, we decided to set a trap on the front porch, and then left to run a quick errand in town. By the time we got home about 20 minutes later, she was in the trap.

She was a terrified little girl, didn’t want us to pet her, didn’t want anything to do with us. It was, at that time, my policy that cats and kittens who hadn’t been tested don’t come into the house, and so we set her up in an old chicken coop with beds and a heater and a stuffed animal and food. The next day, we had to take the inside of the blue coop apart, because she was hiding in the old nesting boxes to get away from us. It took a few days, but eventually Fred won her trust. I took her to the vet to be examined and tested, and that was when we found out that this kitten, who I’d estimated was about two months old, was actually more like six MONTHS old. We set her date of birth at 6/6/2010, which makes her 9 1/2 years old.

At a later examination, the vet said that she didn’t think that Alice would get much bigger than seven pounds.

Alice lived in the bathroom for a few weeks, and once we knew that she was disease-free, she went to live with the Brady Bunch, in the foster room. (Her official foster name was Alice Nelson, which was the full name of Alice the maid on The Brady Bunch.) Alice has never felt the need to have the company of other cats, even when she was a kitten herself, and while she’ll occasionally play with Jake, she’s just as apt to run in terror from him. She’s never had any use for fosters, and in fact if they get too close to her she’ll happily give ’em the ol’ smackeroo.

Alice did actually go to Petsmart to be available for adoption, but Fred missed her so much that we went back and got her less than 24 hours later. She’s a playful girl and will grab a feather teaser when you least expect it. She can jump high for a chunky girl – despite the vet’s prediction that she’d never get to be more than 7 pounds, Alice currently weighs in at 10 1/2 pounds. What can I say? She likes her food. When we have back-to-back fosters and they’re allowed the run of the house for as long as Les Chatons were, Alice puts up with it okay at first, and then she starts over-grooming her belly fur which results in a sparsely furred belly. Her belly is pretty furless right now, but it’s starting to grow back in. (I should add that, like Jake, a few fosters don’t bother her much, but 6 kittens racing through the house stress her out a bit.) She has the nicknames Alice Mo and (less often) Miss Mo, and she loves Fred with a crazy-eyed intensity (the girl kitties always do.) She has her own theme song, as most of you know, and I expect that for her entire life she’ll love her Daddy, yo, but she’s perfectly happy to have me pet and kiss her, too.