On the back of the card, it said:

All of us here at Crooked Acres wish you and yours a wonderful holiday, and a happy and healthy 2016!

This year, I sent out 357 holiday postcards. In what might be a first, every single state got at least one postcard. The four states that received the most number of postcards were California (21), Texas (22), New York (20) and Ohio (20). Internationally, cards went to the following countries:

You can see all the cards I received, which I scanned, over at Flickr, or scroll through them below. 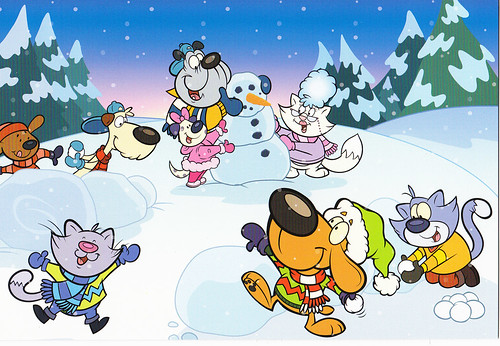 The cards we received in 2014 can be seen here, at Flickr.

And the cards we received as of December 25th can be seen here. And the cards we received can be seen here, over at Flickr.

This year’s cat model was Spanky. Here’s the front: I actually took pictures of all the cards I received this year as I opened them to better share with y’all – I did hang them on the wall in the hallway, but I figured that taking a picture of each card would work out better than trying to make sure every card showed up in a picture of the hallway. I loaded them up to Flickr, but for the life of me I cannot figure out how to share the entire set on a page in my blog, so you’ll have to go over to Flickr to see them all. The cards I received (134 as of January 5th – I always get a few more in January, and I’ll add those to this page around mid-January).

Click on any of them to see the larger version, and PLEASE – if you see your card there and would prefer I blur it out, don’t hesitate to ask me to do so. I blurred out any surnames on the photo cards, but I completely understand if you’d rather not have your face or your child’s face on the internet.