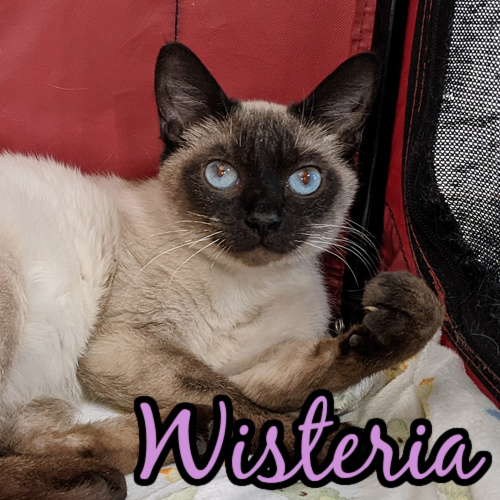 Wisteria (female seal-point Siamese, about 10 months old) came to us on January 24, 2022. She was in an animal control facility in Pell City (about 2 1/2 hours from us), and the employees thought that she was pregnant. She was transported to Forgotten Felines along with several other cats, and we brought her home. She never looked pregnant to me, but did have a little round belly that indicated a slight chance that she could be in the very beginning stages of pregnancy. She was a very sweet, timid girl who took a few hours to decide that we were okay – she’d hide whenever we went into the room, but if we sat down and petted her, she purred like crazy and after a day would seek us out for love and petting.

It was our intention to just let her acclimate to her surroundings and relax and see what happened as far as possibly being pregnant, but she developed some upper respiratory symptoms and I decided she needed a vet visit. Since she was there for an exam, it made sense to have the vet determine whether she was pregnant. The verdict on January 27th: she was not pregnant in the slightest. She did have a slight upper respiratory infection, for which the vet subscribed medication.

She was also already adoption pending, and we decided that rather than have her come back here and be medicated for 2 weeks, she should go to her new home where they’d foster-to-adopt her. She was spayed, and in April her adoption was finalized. They also adopted another Forgotten Felines of Huntsville kitty, Sweet Olive.

You can read about Wisteria beginning here. There are links at the top and bottom of each entry; click on the one on the right to take you to the next entry (there are only a few posts that include her, since she came and left so quickly).

You can see all the pictures taken of Wisteria here at Flickr, or scroll through them below. 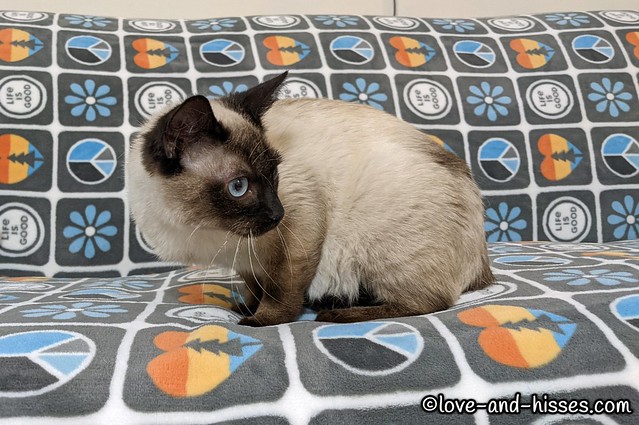