The guesstimated date of birth for Shelton, Levine and Stefani is 10/26/15. They were dumped by the side of the road in rural Limestone County here in North Alabama, and came to us a few days later, on December 15th. They were in good shape and instantly friendly, so had clearly spent a lot of time around people. They settled in quickly with no problems and spend their days racing around wildly, dropping into a pile to nap, and then waking up to race around some more.

Two weeks later, on December 29th, Pharrell came to us. He’s about a week younger than the other three (date of birth 11/3/15) and was spotted near a feral feeding station in Huntsville. He was tiny, pretty obviously had been dumped, and couldn’t be on his own, so the caretakers trapped him. He was so light that he didn’t even trip the trap at first! He’d had some sort of injury to his tail, leaving him with a short stump about 3 inches long – this earned him the nicknames of Nubbs and King Nubbs of Nubbington. When the kittens were all spayed and neutered, the vet removed the very end of his tail, and it looks much better. He’s a timid and skittish boy, but he’s starting to come around. If you’re interested in seeing what his tail looked like when we got him and during his stay with us, you can see pictures and a description here (warning: not for the faint of heart).

The whole litter is named after the coaches on the TV series The Voice. When we got the first three kittens, we had Adele and Pink in residence, and decided to continue the musical theme. Lucky for us, we had the name Pharrell in reserve, just in case!

You can read about Stefani, Shelton and Levine beginning here (there are links at the top and bottom of each entry; click on the one on the right to take you to the next one). You can read more about Pharrell/Nubbs beginning here. You can see all the pictures taken of the Coaches during their stay with us here at Flickr, or scroll through them below.

The Coaches went to stay with Kathie on January 19th – they were just a few days away from their last vaccinations, and we needed to make room in the foster room for a potentially pregnant cat. They went to Petsmart a few days later. 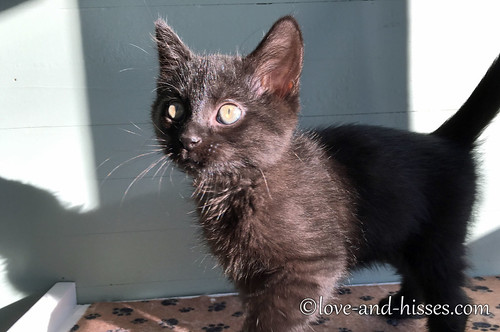