Pink is guesstimated to be about 7 months old (date of birth: 6/1/15). Pink was running around the parking lot of a church dodging cars. She was likely a dropoff because there were no nearby houses she could belong to – but she’s a very sweet and friendly girl, so she’s clearly been around people. Lucky for her, she was spotted and rescued by a Challenger’s House volunteer.

(She’s named after the singer Pink, because we were already fostering Adele and I wanted to keep with the theme of powerhouse female singers – Pink immediately came to mind.)

She is a really sweet girl – immediately friendly, loves to snuggle up and nap with you, and will purr the moment you touch her. She had a few hissy moments with her foster mate Adele, but the two of them became pretty fast buddies who began and ended every day by chasing each other from one end of the house to the other. Pink also got along well with the few permanent residents in her foster home who would play with her, and though she’s a small girl, she can definitely hold her own. (At just over 4 pounds currently, we don’t know if she’ll stay small or have a late growth spurt. Either way, she is a wonderful girl!)

You can read about Pink beginning here (there are links at the top and bottom of each entry; click on the one on the right to take you to the next one). You can see all the pictures taken of Pink during her stay with us here at Flickr, or scroll through them below.

Pink was adopted on January 9th, and has been renamed Tribble. 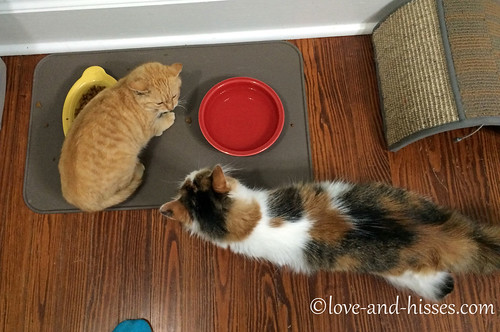