Adele is guessed to be about 9 months old. She was apparently dumped at the apartment complex where the Classic Rockers came from in late 2014. She was approaching people, and lucky for her Sue and Byron spotted and saved her; she’s got no street smarts and was nearly struck by a car. A canvass of the neighbors didn’t turn up anyone who knew who she was, so she came to Challenger’s House the day after Thanksgiving, and to us the following Thursday (December 3, 2015).

She is a really awesome girl – friendly, confident, playful, and snuggly. She walks around with her wonderfully floofy tail straight up in the air. She’s a friendly lapcat who isn’t scared by much and gets along well with other cats.

You can read about Adele beginning here (there are links at the top and bottom of each entry; click on the one on the right to take you to the next one). You can see all the pictures taken of Adele during her stay with us here at Flickr, or scroll through them below. 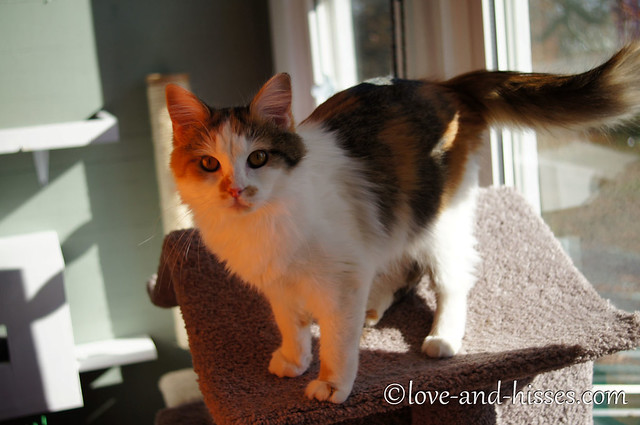